The Delhi Police registered a case under section 304 of IPC (culpable homicide not amounting to murder punishable with a maximum imprisonment of 10 years) against the factory owner. 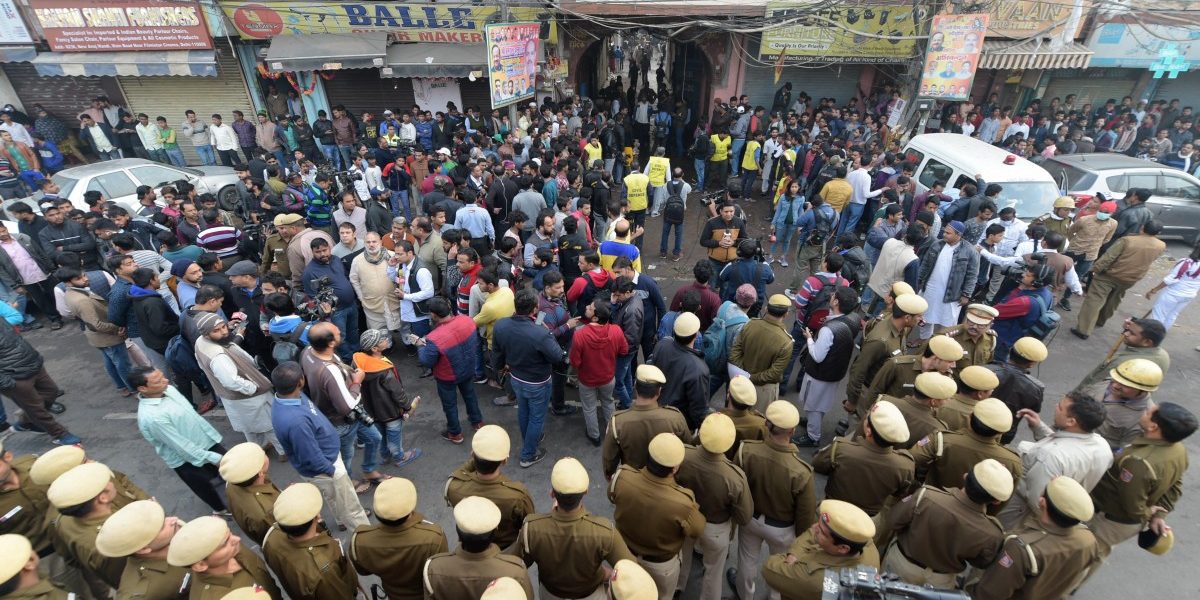 Police personnel and onlookers stand near the factory where a major fire broke out on Sunday morning, December 8, 2019. Photo: PTI/Vijay Verma

New Delhi: A massive fire swept through a factory in Anaj Mandi area of north Delhi on Sunday morning, leaving 43 labourers dead and many others injured, police said.

A total of 59 people were inside the factory, which is operating in a residential area when the blaze broke out, they said.

The fire was reported at 5:22 am, following which 30 fire tenders were rushed to the spot. Chaotic scenes were witnessed at the site of the fire incident with relatives and locals rushing to the area.

Distraught relatives tried to locate their family members at various hospitals where the injured and dead were taken. 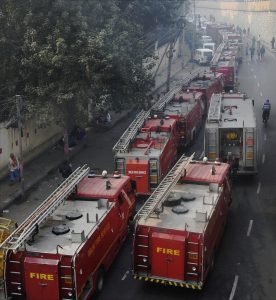 The fire was reported at 5:22 am, following which 30 fire tenders were rushed to the spot. Photo: PTI/Vijay Verma

Manoj (23), a resident of Begusarai in Bihar, said his brother Naveen (18) was working in a handbag manufacturing unit operating from the premises. “I got a call from his friend informing that he has been injured in the incident. I have no clue which hospital he has been taken to,” he said.

According to an unidentified elderly man whose three nephews were working in the factory, “At least 12-15 machines were installed in the unit. I have no idea about the factory owner. My nephews Mohammed Imran and Ikramuddin were inside the factory. I don’t know their whereabouts,” the man said. He added that many units were operating from the premises which were located in a congested area.

Many people trapped inside were rescued and rushed to RML Hospital, LNJP, and Hindu Rao Hospital, fire officials said.

Thirty-four people were brought dead to LNJP hospital and smoke inhalation was the primary cause of death. Some of the bodies were charred, Dr. Kishore Singh, Medical Superintendent, LNJP, said.

Out of the 15 injured brought to LNJP, nine people are under observation and others have partial injuries, he said.

The Delhi Police on Sunday registered a case against the factory owner. Police said a case under section 304 of IPC (culpable homicide not amounting to murder punishable with a maximum imprisonment of 10 years) has been registered.

The case has been transferred to the crime branch.

The fire in Delhi’s Anaj Mandi on Rani Jhansi Road is extremely horrific. My thoughts are with those who lost their loved ones. Wishing the injured a quick recovery. Authorities are providing all possible assistance at the site of the tragedy.

Congress leader Rahul Gandhi also expressed his deepest condolences to the families of those killed.

“Saddened at the news that a massive fire in the Anaj Mandi area of Delhi has claimed many lives and left several people injured,” Gandhi said in a tweet in Hindi. “I extend my deepest condolences to the families of those killed and wish for the speedy recovery of those injured,” he added.