East Kidwai Nagar Should Serve as a Warning, Not Model, for Delhi’s Redevelopment

The NBCC 'model' project is hardly the totem of sustainability and responsibility. It has been fined for non-compliance of environment laws, and official planning documents expose its shaky claims of urban design and economic viability. 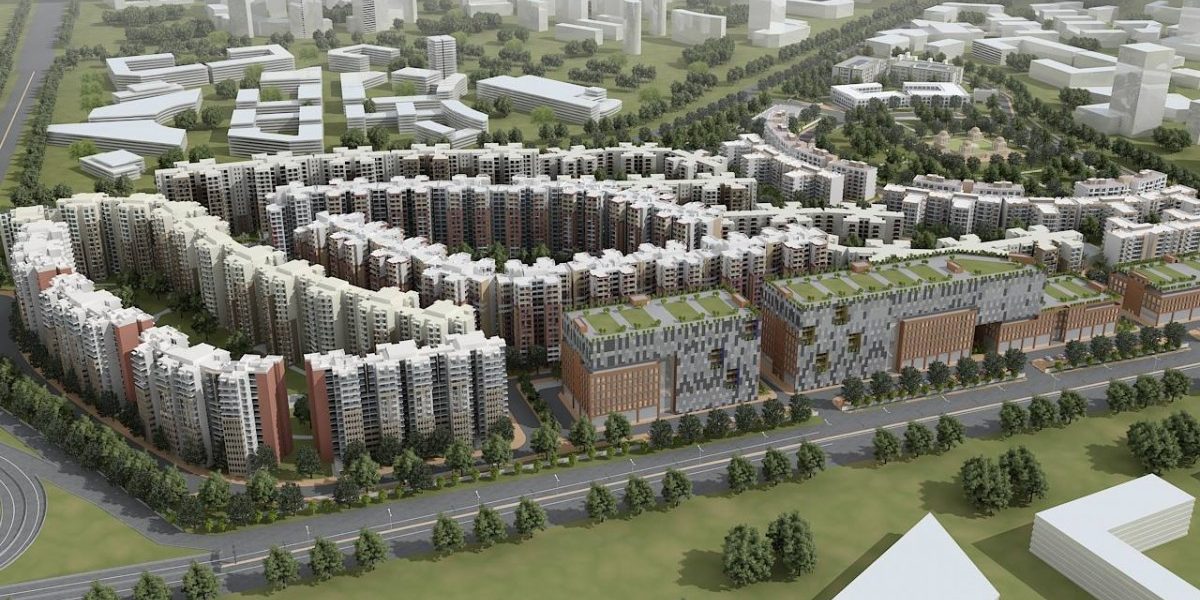 For over four months, the national capital has seen public protests against the Ministry of Housing and Urban Affairs’s “redevelopment” of Delhi’s seven government housing colonies. Citizens have questioned this project, which will privatise and commercialise public lands, fragment urban landscapes into wastefully designed gated colonies, and lead to congestion and pollution. Not only will this redevelopment impact citizens in the immediate term, but a valuable opportunity for generating planned housing, mobility and other public services to meet the needs of a growing city will be lost for another generation.

In response to these criticisms, NBCC, which is in-charge of building three of the seven colonies has upheld its ongoing project at East Kidwai Nagar (EKN) as the “model” project in order to gain credibility for its redevelopment project plans. EKN is a gated office-cum-housing complex located between Sarojini Nagar and South Extension.

However, if court orders and project documents are anything to go by, EKN is hardly the totem of sustainability and responsibility. It has been fined for non-compliance of environment laws. Official planning documents also expose its shaky claims of urban design and economic viability.

Non-compliance of laws and court orders

The Delhi State Environment Impact Assessment Authority (SEIAA) first approved the EKN project in 2012 and it was amended in 2014. As a Category B project under the EIA Notification, 2006, EKN was approved without a detailed environment impact assessment and public hearing.

Since then, the project has already seen at least four cases in the Delhi high court as well as the National Green Tribunal (NGT) and the project’s legal violations have been confirmed by judicial orders. One case was filed in July 2015 in the NGT by a resident of South Extension, the neighbourhood directly impacted by the construction of this project. In this case, NBCC was fined Rs 10 lakhs for flouting project safeguards regarding dust generation and discharge of waste water into drains. The NBCC was “warned” that in any event of default, the Tribunal would be compelled to direct penal action…” Within three months of this judgment, the NBCC was to “plant trees and create permanent barriers”. This direction is yet to be fulfilled.

In February, the Comptroller and Auditor General’s report on the Government of NCTD recorded yet another environmental violation by the project. This report no. 3 of 2018 records, “NBCC obtained permission to fell 1,123 trees during 2014-17 for East Kidwai Nagar Project on a security deposit of 4.51 crore. DCF (South) had issued this permission but the division did not do any compensatory tree plantation during 2014-17 whereas NBCC planted 1,354 trees against a requirement of 8,165 trees.” The CAG report further observed that there was no evidence in the files of the Forest Department to show that plantations were carried out by NBCC.

In 2012, when the project was approved, the Delhi SEIAA had laid a condition that “Traffic congestion near the entry and exit points from the roads adjoining the project site must be avoided.” However, the detailed traffic assessment for East Kidwai Nagar is yet to be completed. A writ petition pending before the Delhi high court since 2014 contends that the construction would increase population pressure at least by double and block traffic around two major hospitals in the vicinity, AIIMS and Safdarjung.

A recent report states that the Delhi high court while hearing the above case has restrained NBCC “from handing over possession of the commercial space” built in EKN. The reasons for this interim order is reportedly because there is still no clarity on how water requirements and traffic management will be achieved by the project.

On July 25, 2012, the Delhi Urban Arts Commission during its 1,312th meeting had, categorically rejected the redevelopment project after carefully scrutinising its scale and design. Commenting on the “generally repetitive blocks with a height up to 150 ft. in 76 towers” the Commission called the project a “vertical slum”. They also observed that such construction would lead to the cutting of 85% of the 3,000 standing trees in the area. The commission was of the view that “… the high rise towers have been repeatedly arranged in a certain manner destroying the green zone.” The DUAC also clearly stated that although the FAR had been increased to allow this project, “the existing roads network does not have [the] capacity to hold this enhanced FAR.”

However, the project was approved by DUAC on its 1330th meeting in April 2013 when the project papers were forwarded by NDMC rather than NBCC itself. The minutes of this meeting clearly show that the Committee was not impressed with the design of the project due to its poor ventilation, lack of service space in the apartments, and the lumping together of all community facilities in a corner of the site. Yet the “approval with observations” was granted on the grounds that the “housing project needs to be taken up in quickest possible time”. Going by the project as it stands today, it does not appear that DUAC’s recommendations were taken seriously.

The PPP model of redevelopment

Lastly, even as the legal questions remain unresolved, the economic basis of the EKN project seems arbitrarily settled. The official EKN files give a flavour of the debate that went into the question of sale vs lease of government assets to avoid any financial burden on the government. As per official documents, EKN was to be rebuilt by changing Type 1 to Type II by the PPP model. This reconstruction of government housing was to be done by NBCC using the reserves from the sale of Netaji Nagar for New Moti Bagh. From then till 2011, the urban development minister, the Planning Commission and the finance ministry preferred the lease model of financing over freehold sale to generate additional resources for the project.

A January 2009 note sheet signed by Aniruddha Kumar, Director (Works), Ministry of Urban Development suggested that if the cabinet does not approve sale, then 10% of FAR permissible for mixed land use as per MPD 2021 can be turned into an office complex and in addition, 10% of BU housing can be given to NBCC for 30 years. Since NBCC reported that it was unable to find takers for lease, by August 2010, it was decided that 60% of commercial/office space could be leased to Department of Revenue. The other 40% would be leased to other PSU/government housing. The additional 10% housing was also to be leased by Department of Revenue. A draft MoU was prepared by February 2011. Official records state that there was no precedence of such a tripartite agreement between the NBCC, the government agencies as lessees and MoUD. This project could have not been possible without these leases that the government allocated to itself.

It is interesting to note that after 2011, the argument of lease versus freehold seems to have been settled in favour of the latter by the MoUD. The seven redevelopment projects that are under contestation in courts include a large commercial component for freehold sale purportedly for self-financing the government housing project – a public good. But when the scale of the commercial component, especially in the form of a dozen World Trade Towers in Nauroji Nagar, has come under criticism, NBCC has defended it in the name of “densifying” Delhi. Thus commercialisation of space is no longer a means to an end but the end itself.

This is an irony that symbolises neoliberal development projects. The EIAs, environmental approvals and all other project documents refer to the redevelopment projects as a “government housing project” even though NBCC is now willing to accommodate fewer houses in its revised designs while protecting the Nauroji Nagar World Trade Centre from any adverse litigation. An article last year stated that the sale of a single tower generated Rs 1,100 crore.

The law of redevelopment

Delhi has dealt a brute hand to the city’s poor in the name of law. In the last few years, several bastis or settlements have been displaced even though it is a known fact that the poor build cramped settlements for their housing needs because the DDA has failed to provide adequate low-income housing. If law is indeed of any concern to Delhi’s residents, it is the EKN and these “redevelopment” projects that deserve our attention. They have side-stepped both urban planning and environmental laws, have favoured high-rise, repetitive towers that foster monopolies, and have left out traffic, trees and water as an afterthought.

Only a handful of architects and planners have dared to speak up against this legitimised squandering of Delhi’s resources and the opportunity to reinvent an inclusive city. Others stay silent due to fear of retaliation by government agencies that they rely on for all their design and building approvals. It is for the same reasons that the regulatory bodies made up of “expert members” approve unimaginative and high-impact projects.

The shaky state of NBCC’s model EKN project is evidence of unjust laws of urban redevelopment. It would be a great folly to see this project as a precedent for Delhi’s redevelopment.