In the Shadow of Delhi’s Redevelopment

Even as some residents have stood up against the government-backed re-development project, they continue to suffer the tribulations of this massive construction adjacent to their homes. For over three years, a handful of ordinary homeowners have been embroiled in litigation against the entire government establishment seeking to unlock the real estate potential of the valuable land of East Kidwai Nagar. Credit: Flickr/Veeresh Malik

New Delhi: For three years now, Delhiites have been witnessing the “redevelopment” of the East Kidwai Nagar government housing colony, a project of the Ministry of Housing and Urban Affairs. The row of buildings that face the busy ring road of South Extension house government offices and are lit up by multi-coloured lights at night. Behind these high-rise structures and extending upto INA market, 4,840 “dwelling units” will replace 2,331 old government houses. The project costs Rs 4,264 crore and has been touted as a “role model” by top leaders of the government and even vice-president Venkaiah Naidu. 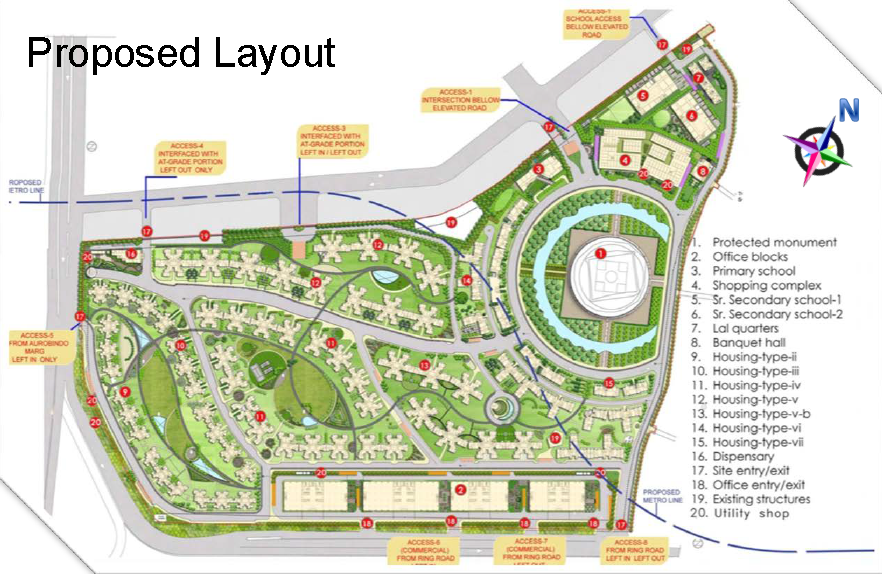 However, if you approach this construction site from behind, through one of the lanes next to the INA market, you reach the location over which a recent battle of ‘citizen dwelling versus government housing’ took place. For over three years, a handful of ordinary homeowners have been embroiled in litigation against the entire government establishment seeking to unlock the real estate potential of the valuable land of East Kidwai Nagar.

At the northeastern edge of the site are 40 freehold quarters constructed over an area of about 2,985 square metres “under a re-housing scheme at Kidwai Nagar”, back in the 1960s. Out of these, seven belong to the New Delhi Municipal Corporation (NDMC). These are homes that families have either inherited or bought from the original allottees. These block of houses can be recognised by the signboard “Lal Quarters Residents Welfare Association.”

When the proposal for East Kidwai Nagar redevelopment was made, the government ignored or failed to register that they would have to buy this land from the owners. They had the option of using the land acquisition route. However, since the Right to Fair Compensation and Transparency in Land Acquisition Rehabilitation and Resettlement Act had just been passed in 2013, the government would have had to pay these families at least four times the land’s market value. According to residents, the combined plot was valued at nearly Rs 250 crore and its acquisition would have cost the project substantially.

Instead of engaging in respectful negotiations, the company (NBCC) and government allegedly tried their best to coerce the landowners out of their homes. Residents reminisced the frequent electricity cuts and blocked phone lines they suffered during those days. Court papers indicate that the residents sought restraining orders against the project proponents due to this kind of harassment. On October 16, 2014, in the first hearing of the case Lal Quarters Resident Welfare Association v/s Union of India and Ors (WP. C. 7142 of 2014), the court ordered: “In the meanwhile, no coercive action shall be taken by the respondent.” The court continued to emphasise this interim order throughout the course of the hearing.

The orders show that there were offers to shift the residents to apartments provided by the developers. On May 29, 2015, the NBCC’s statement recorded by the court says, “There is a proposal to shift the residents of the said quarters to other houses in the said redevelopment scheme, which are ready for occupation and have already been offered to the residents of the quarters.” However, the residents refused to move as the matter of ownership of the land was still pending in court. This was eventually resolved in their favour. The proposal extended by the project proponents to exchange land for apartments was neither fair nor legal.

On May 15, 2015, the court agreed to NBCC’s request that they be allowed to “carry out development work outside the periphery of gated colony” of Lal Quarters. But this was on the condition that the construction would not hinder the access to the main entrance of the colony. At one point the project proposed to take up the only motorable road that the residents had. It supposedly led the judge to ask “if the project expected the residents to take the aerial route using helicopters to travel in and out of their homes.”

On January 18, 2018, when the High Court finally dismissed the case, it was upon the written assurance of the NBCC that “on the project being completed, there would be two broad roads that will lead to the said gate.” Specific maps demarcating these access roads were submitted in court and were included in the order.

The Kushak Nallah separates the INA market from East Kidwai nagar. It was once a haven for birds, as per Kalpavriksh Environment Action Group’s decadal bird census from 1980-90. In 1987, birdwatchers had recorded close to 80 bird species along the 1.7 km long stretch of the Nallah within South Delhi. This has now degenerated into a sewer due to all the construction around it like the PWD’s Barapullah flyover and the East Kidwai Nagar GPRA. The project developers have provided a flimsy iron bridge for residents and those living in precarious living conditions by the Nallah. The sewer floods with the first rains and this bridge is then submerged in flowing human and animal excreta.

Even as the case was on, work on the project site began at the boundary facing the ring road and moved inwards towards INA. The residents lived with the dust and noise from this massive construction next to them. They say that at one point the contractors even set up a brick kiln in the middle of the site, which would emit black smoke. If NBCC had a signboard with all the conditions of the 2012 environment clearance listed on it, one of them would certainly be: “Proper measures should be adopted to control dust emissions during construction phase by providing adequate numbers of water sprinklers.”

Construction is going on in full swing at the site. But as per recent reports, the trees planted in East Kidwai Nagar are nowhere close to what should have been. There are only a “handful of trees” planted at site which are in “precarious condition”. The landscaping at the site has little space for big trees like neem, fig and others which once existed in the colony. What is visible are ornamental palms and patches of grass, “fenced with hedges and flowering plants”.  A February 2018 report of the CAG indicates that at least 1,123 trees were felled at the site following due permissions from the tree officer at the Delhi Forest Department. The compensatory plantation is only 16.5% of what was mandated.

The “social infrastructure” that is to be set up as per the Delhi Master Plan is all pushed into one corner of the site with barely any space around it. This includes a local shopping complex, a senior secondary school and a banquet hall. Basement parking for 450 vehicles is under these buildings. The Darya Khan monument stands vulnerably in the midst of all this construction separated by a sliver of land around it, thanks to ASI norms. Ironically, this is the tomb of the Chief Justice of the court of Bahlol Lodi, the founder of the Lodi dynasty of the Delhi Sultanate. The monument is included in the list of 174 in Delhi that are of national importance.

The families of the Lal Quarters RWA received a positive verdict from the court in January 2018 and earned the right to keep their homes. But the consequences of having stood up against the government-backed “redevelopment project” are only beginning for them. They continue to suffer the tribulations of this massive construction adjacent to their homes. Once completed, they will have to live at the margins of this new community and jostle with them for public space, water and other amenities. The natural and cultural heritage of the city may not even have that chance.