Explore the weekly markets in any Delhi neighbourhood and you will find an unlimited range of things on sale which can be studied for an idea of the kinds of people who buy them.

The people who come to these markets buy different sets of items depending on their social background. Photo: Claudio/ Flickr (CC BY-NC-ND 2.0)

Let us list some of these common items on sale in every weekly market to illustrate this point. Each market has on sale items from a veritable list of must-haves which include, pestles and mortars, grinding stones, tongs, rolling pins, rolling boards, griddles, woks, garlic, ginger, onion, potatoes, rock salt, whole spices, readymade pickles, cooking oils, whole grains, pulses, lentils, papads, lengths of fabric, washing soap cakes. A few shops will, of course, be selling jalebis and laddoos.

Explore the weekly markets in any Delhi neighbourhood and you will find an unlimited range of things on sale including popcorn, momos, noodles, ice cream, kulfi, gowns, undergarments, jeans, t-shirts, shirts, tops, frocks, skirts, bedspreads, curtains, tapestry material, towels, mops, fly swatters, fruits and vegetables, both regular and exotic. Interestingly, the things mentioned in this paragraph can disappear with the change of season or fashion but the items listed in the paragraph above will always be sold.

And it is these items that one needs to explore a little more closely.

The most crucial of them all is rock salt. Salt was initially not easy to come by because Delhi is far away from the ocean, quite some distance from the salt lakes of Rajasthan and 580 kilometres from the sources of rock salt which is mined at Khewra, which is now in Pakistan. From Mandi in Himachal Pradesh, where rock salt is mined as well, Delhi is 439 kilometres away. 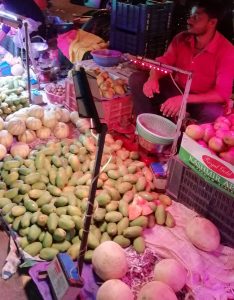 Fresh vegetables, fruits and spices at these markets are a draw for residents of nearby societies. Photo: Sohail Hashmi

Thus, salt and spices that will not go bad, along with onions, garlic, ginger, kitchen utensils and fabrics – all of which are unlikely to be in every village or made by local artisans there became the primary stock for the weekly market shopkeepers.

These shopkeepers would arrive at a village on a fixed day every week. Villagers bought what they needed, enough to last for a week, or to replace things that were no longer useable like a pair of tongs that had twisted, woks which had developed holes in them, or pestles which had broken.

The shopkeepers returned every week, catering to neighbouring villages for the rest of the six days, just as they do now.

Merchants hawking their wares at Khirki on Friday could be at Hauz Rani on Saturday, at Adhchini on Sunday at Katwaria Sarai on Monday, at Ber Sarai on Tuesday, at Zia Sarai on Wednesday, at Begumpur on Thursday and at Khirki once again on Friday.

That is how it has been for centuries, not only in Delhi but all over the country. There were and are similar weekly markets in Bhopal, especially in areas that were villages until a couple of decades ago. Similar markets come up in Bengaluru, in Mumbai, in Patna, in Ranchi, in Kolkata and in Visakhapatnam. These markets share the antiquity of the villages that made these cities.

If the men and women who came to buy from these stalls have changed, in Delhi they have changed drastically. The status of a majority of the villagers, except for Dalits and those who used to be agricultural labourers, has changed hugely after their land was acquired. They are no longer major patrons of these shopkeepers.

The residential areas of the villages are now builder flats and dingy hovels. The flats are for the educated middle-class flooding the call centres, service centres, IT industry, startups, offices and educational institutions. The latter are for the delivery boys, shop hands, drivers, newspaper boys, milkmen, factory workers and those working in hundreds of illegal sweatshops. 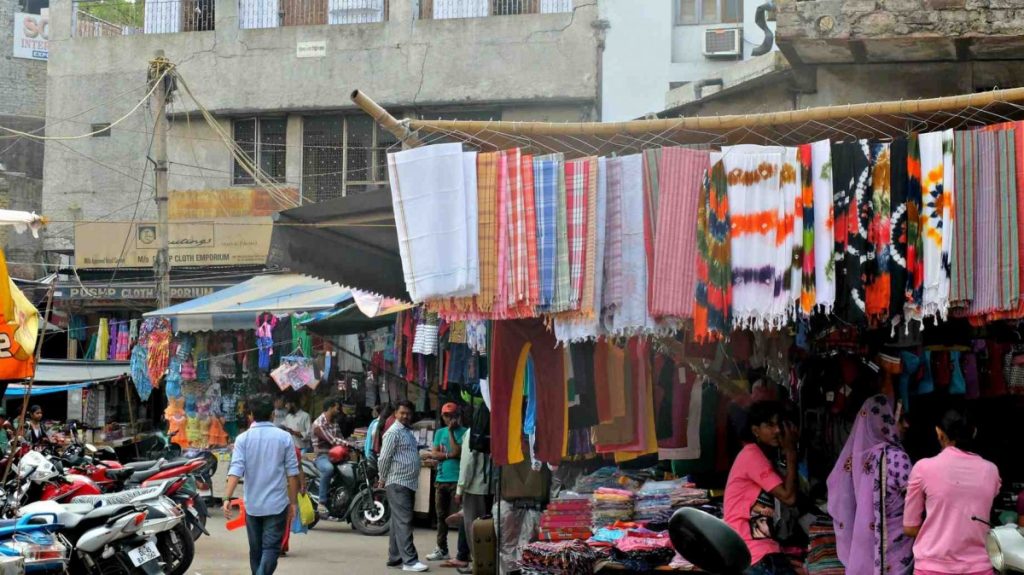 Traffic snarls caused by weekly markets have, in the past, provoked citizens enough to protest. Photo: We travel the world/Flickr (CC BY-NC-ND 2.0)

These two diverse sets with very different needs throng these markets. The middle class comes to buy fresh vegetables, fruits, chicken and fish, most of which are available at prices lower than regular markets.

The labourer goes to the same weekly market not only to buy clothes emblazoned with texts that makes no sense in any language and ‘authentic fakes’ like ‘Adibas’, ‘Nice’, ‘Slajinger’ and ‘Kelvin Klean’ but also an entire kilogram of wheat flour, 250 grams of arhar dal, Rs 2 worth of garam masala mix, whole dried chillies, 50 grams of turmeric powder, a rupee worth of Salt, enough cooking oil for light frying and vegetables that have seen better days.

The hafta (weekly) bazaars meet most of the needs of these two distinct classes comprising neighbours who live in their own worlds. The only place where they come together and once in a while stand next to each other are at these bazaars.

On the outskirts of the village, on land that was once owned by villagers, have come up swank residential areas like Vasant Vihar, Westend, Niti Bagh, Gulmohar Park, Hauz Khas and East of Kailash. A large number of co-operative group housing societies in places like Vasant Kunj, Patparganj, Mayur Vihar, Dwarka, Rohini and Janakpuri have also come up. 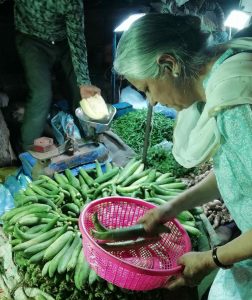 Villagers earlier bought what they needed from these markets, enough to last a week. Photo: Sohail Hashmi

Residents of these localities are also regulars at these markets, they buy fresh vegetables, fruits and spices like broccoli, sweetcorn, zucchini, oregano, basil, kiwi, passion fruit, avocado and so on. Except, they come in cars which create awful traffic snarls.

These snarls have, in the past, provoked citizens enough to protest and the matter was even raised through a writ petition before the Supreme Court. A two-member bench consisting of Justice B.P. Singh and Justice Harjit Singh Bedi gave its judgment on May 7, 2007. In it, the apex court approved the scheme submitted by Municipal Corporation of Delhi and New Delhi Municipal Council, which delineated the location, days and timings for not just weekly markets but also pavement hawkers in general.

However, the number of weekly markets that are now held on the roads has only increased. Many of these markets which were earlier held in shaamlaats or common grounds of a village have now been pushed on to the roads because these grounds too have been built over.

Anywhere else in the world, these weekly bazaars would have been given designated areas to operate from. There would have been site allotments, constructions would have been made to ensure public convenience and these markets would have been presented as the living heritage of a city, because that is what they are. They are living, breathing, constantly evolving and acutely inseparable parts of our heritage. They trace their origins to times lost in the mist of the past, probably going back to times when traders would exchange salt with cotton, or jaggery with spices.

But to us, they are only a nuisance; to the city fathers, they pose only as a problem. Why can we not close the market area to traffic for a part of a day and request people to walk half a kilometre – something that will do their health an awful lot of good, reduce the chaos of traffic and open up the possibility of preserving these markets which connect us to a past which we are so proud of.

And then, perhaps, travellers and tourists would visit these markets and write about them, just as they do on the Grand Bazaar of Istanbul, the unending bazaars of Aleppo in Syria, the Chatuchak Market in Bangkok, the Tsukiji fish market in Tokyo, the Camden Market in London, the Pike Place Market at Seattle in the USA and the similar traditional bazaars of Fergana, Samarkand, Bukhara, Egypt and elsewhere, each with their own history and unique ambience.

Can we rediscover the joy of a haat bazaar once again and to showcase it to the world?