Overhead Wires in Delhi – A Brief History of the Unholy Mess

The story of how hopelessly entangled strands of all kinds of wires continued to grow.

The sight at Hauz Qazi in central Delhi.

Most first time visitors to Shahjahanabad, except for those who have grown up in other old cities, have the same reaction of shock and surprise when they notice the tangles of overhead wires, being used by armies of monkeys on their daily journeys in search of food.

They first notice the monkeys and then their highways in the sky. Then one hears the gasps of surprise and dismay.

The general consensus among these first time visitors seems to be a general display of disquiet  and a shocked shaking of the head at the uncaring callousness of the inhabitants and an utter absence of civic sense among the more backward of Indians. 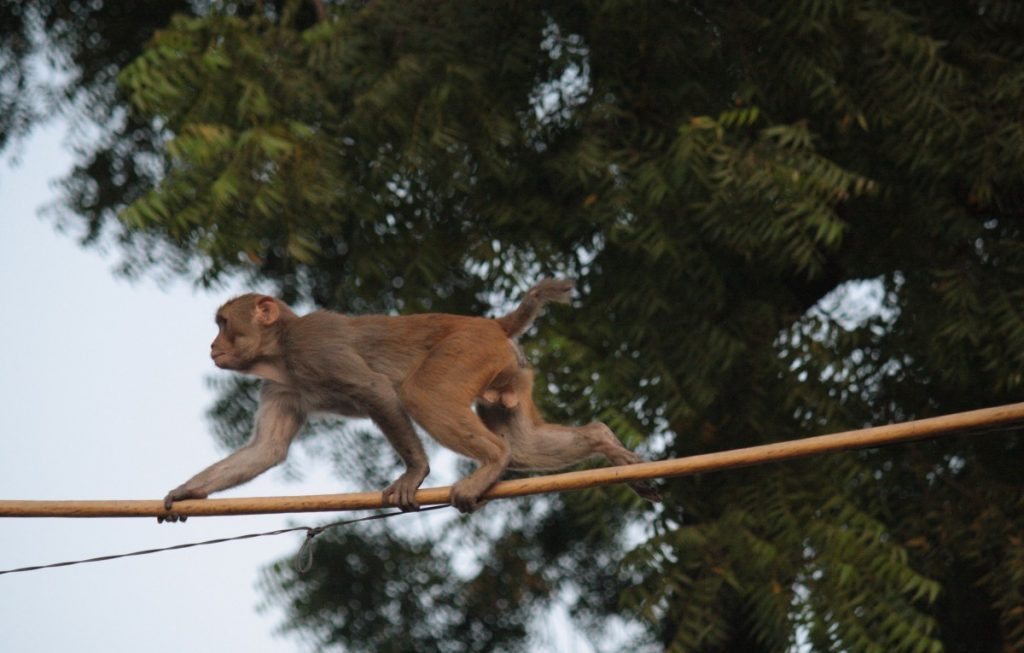 If I remember my readings on this issue properly, then electric supply for domestic consumption was first introduced in Delhi in 1903. This is the time when hectic preparations were on, under the supervision of Viceroy Curzon, to receive King Edward VII to Delhi.

It was planned that after his coronation as King of the United Kingdom of Great Britain and Ireland, Edward would travel to India and be crowned Emperor of India at Red Fort.

This, however, was not to be, Curzon’s distractors were able to scuttle these plans, a minor prince visited India to represent Edward at the 1903 Durbar. Delhi, however, started receiving electric supply through huge generators installed outside the town hall in Chandni Chowk as part of the grand preparations of the Coronation Durbar of 1903.

Also read: A Work Perpetually in Progress: The Curious Case of Signboards in Delhi

The generators were operated by a British company and the agents of the enterprise went door-to-door to house-owners, shopkeepers and tenants, explaining the advantages of electric lighting that could turn night into day.

Most people were rather sceptical and not overly impressed; they did not see the logic of lighting up the night; nights were for sleeping, they said.

There were, however, a few who wanted to do what the Sahebs were doing and decided to take a power connection. Those who agreed were promptly rewarded with an electric pole fixed outside their shop or home; a wire connected them to the power grid and another to the power points they had chosen to install inside their establishments

Over the next 44 years, the network continued to expand and by the time India became independent and was partitioned, there was already this mess spread all over Shahjahanabad.

In fact, to this network of poles and wires were added telegraph wires in the early 1850s (Ghalib, who died in 1869, writes about how telegraphy will impact letter writing), wires that helped propel the electric tramways from 1908 and telephone wires with the start of the first telephones exchange in Delhi in 1911.

An interesting aside to the introduction of the telephone is this little excerpt from page 58 of Mansions at Dusk authored by Pawan Verma that has the following: ‘In 1877, Umrao Singh the nephew of Chunnamal had installed some telephone instruments in the haveli, “which attracted crowds of wondering admirers”’. The question is: who was Umrao Singh talking to on these phones and how, when the first telephone exchange in Delhi becomes functional full 34 years later in 1911?

Independence and Partition came together and in the wake of the Partition came communal riots on an unprecedented scale and the largest migration of humans in history. The partition led to an outflow from Delhi of almost 300,000 and an inflow into the city of almost 800,000.

The population of Delhi fell from 900,000 to 600,000 and then swelled to 1,400,000. Houses, jobs, schools, markets and hospitals had to be built or expanded for this new population of tens of thousands of homeless and all the resources of the city were spent in creating these facilities. No one had the time or resources to worry about the ever growing tangle of wires.

Meanwhile, as the population continued to increase, more telephone lines were needed. There were more and more power consumers and tens of thousands of new connections were added to the already overburdened network.

The increasing demand for power led to the introduction of high tension wires, all without insulation. This unholy mess would lead to minor and major electric fires with every storm. Tele-printer cables were added to the same network as more and more wholesale traders and  share-market players moved into the old city as it gradually turned from a city into a hub of trading and forward trading in sugar, jaggery, mishri, khandsari, grains, pulses, spices, pickles, nuts, dry fruits, preserves, soaps, candles, cooking oils, paper, books, stationary, art materials, wedding cards, bridal finery, cooking vessels, sanitary ware, hardware,  textiles, gunny sacks, jute flooring, sewing machines and everything else imaginable. 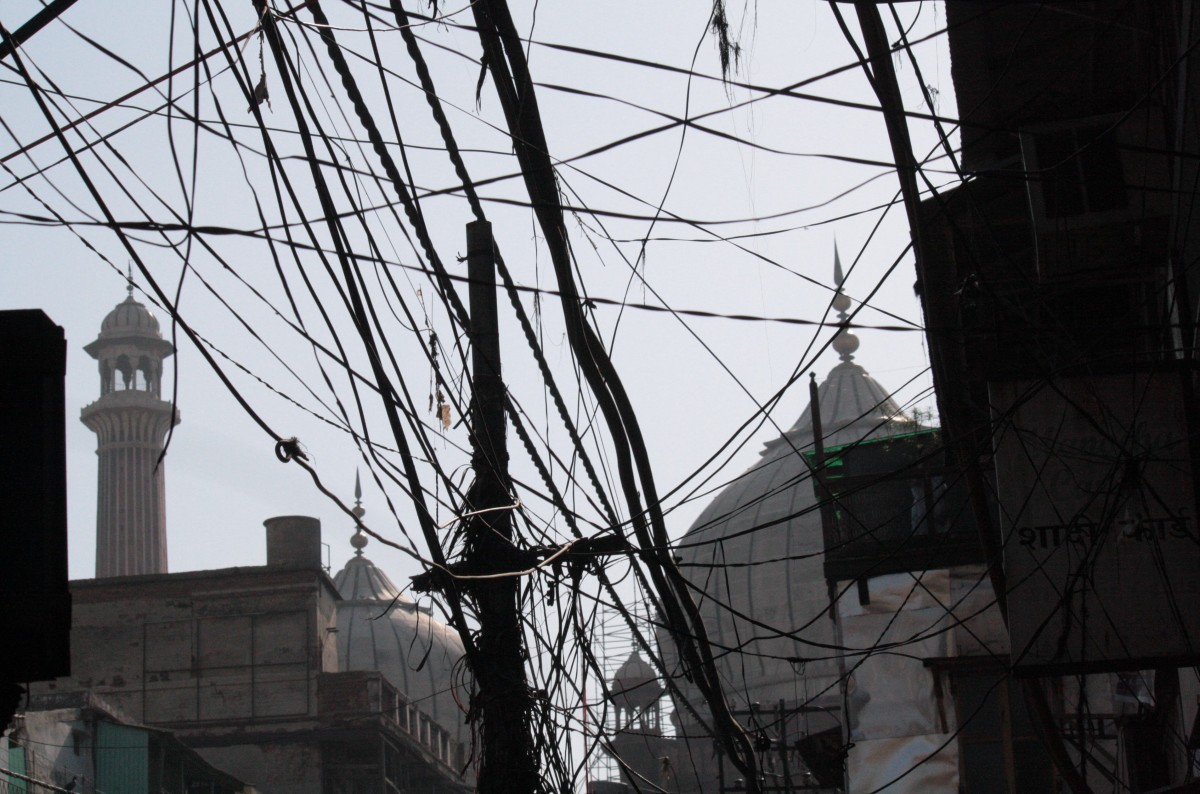 The city built by Shahjahan for a population of about 3000,000 became a gigantic wholesale market, buying from and selling not only to Delhi, Ghaziabad, Faridabad and Noida, but also to and from Haryana, Himachal Pradesh, Punjab, Jammu and Kashmir, Rajasthan, Madhya Pradesh, Gujarat, Bihar and from Bengal, Maharashtra  Tamil Nadu and elsewhere.

The hopelessly entangled strands of all kinds of wires continued to grow.

Surprisingly, the problem of overhead wires did not exist in New Delhi, the colonial capital whose construction had started within nine years of introduction of electric supply to Shahjahanabad. In New Delhi the wires were mostly underground.

Was it because power supply in Delhi was in the hands of a private company and the British wanted to present the new capital as a showpiece and therefore kept everything centralised?

We can easily lay the blame for the mess that is Shahjahanabad, on the British companies that managed electric supply, the trams and the telephone and tele-printer services, but they have been gone for 72 years and so it stands to reason that the Old Delhiwallahs must share the blame, shouldn’t they?

What is surprising however is the fact that whenever we talk of the tangled mess of wires in what we derisively refer to as ‘Delhi 6’ we tend to overlook the fact that all this mess is all around us outside Shahjahanabad as well.

Every new settlement that came up in the wake of the Partition like Lajpat Nagar, Malviya Nagar, Rajinder Nagar, New Multan Nagar, Amar Colony, Subhash Nagar, Tilak Nagar, Ramesh Nagar and many so called posh colonies present the same scene of tangled wires precariously hanging from electric poles threatening every moment to pull down the entire network.  The same mess is to found in all the old villages of Delhi, now known as urban villages – whatever that might mean.

Removing these eye sores will need a major effort and a substantial financial outlay. A beginning has been made in Chandni Chowk and Daryaganj and most over-head wires have been taken underground. All high tension wires are now insulated, but taking the network underground in the narrow lanes and by-lanes of Shahjahanabad is not going to be easy.

How and when to start the tunnelling work to take the electric cables, internet wires, cable TV and fibre optics is easier said than done. If this can be done in Shahjahanabad, one can also do it in all the old cities of India and follow this up with cleaning the mess in new cities as well. All this will happen only when we begin to value our cities as our living heritage.

What we are trying to get at is one simple thing, the mess that we are in, is not always of our own making, some of the muck is part of our inheritance, but we have to recognise that the continuation of the mess is a by product of our own native genius.