The Delhi Metro's Facade of Precarious Finances Shouldn't Fool Anyone

To top the DMRC's total disregard of the architectural ethos of the city, all periodic pronouncements that the metro will have to shut shop unless it is allowed to jack up the fares are nothing more than hyperbole.

This is the second article in a two-part series on the Delhi metro. You can read the first here.

Last week we had talked about how the metro, ushered in with the promise of changing the way Delhi travels, has reneged on that promise by constantly harping on decreasing profitability and repeatedly hiking the price of tickets and placing the metro beyond the reach of those who need cheap transport the most. The metro has ridden rough shod all across the city, caring little for students in Jamia University and disturbing the sleep of millions as its trains zip through the middle of the university and amidst thickly populated residential areas and all this because it chose to stay over ground to save construction time and money.

These objections might be brushed aside as the cost that one has to pay for development, but how is it that those that remain untouched by this development pay the most for it while the sleep of those who benefit the most from this model of development is never disturbed. The metro gently goes underground as it approaches the sanctified arena of the VIP district, the place where the planners sleep, emerging at the other end while its pylons, air-conditioning and exhaust ducts, steel and glass gates overshadow everything and obscure the sky on all sides of the charmed circle of the VIP district.

The whole story of precarious finances is a façade. The metro is never going to be short of funds, not unless it slips on its delivery targets. The costs are being met through a loan from the government of Japan routed through Japan Bank for International Cooperation (JBIC), now known as the Japan International Cooperation Agency (JICA). 60% of the costs for phase I, 54.47% of the costs for Phase II and 48.57% of the costs for phase III were financed through a soft loan incurring an annual interest rate of a little over 1.4 % to 2.3 % or thereabouts. The balance was met through a 50:50 partnership between the Government of India and the Government of NCR Delhi. The DMRC was to mobilise about 7% of the total cost through developing property. It would acquire land for developing such property through a government provided subsidiary loan roughly equal to 5% of the cost of the project.

So, if the DMRC used the subsidiary loan amounting to 5% of the cost of the project to acquire land and developed it properly, it will have substantial savings from this one head alone after contributing its share of 7% to the common kitty. Even someone unable to go beyond simple addition will tell you that land when developed into malls, shops and kiosks is always a hugely profitable operation. At least for the builder and DMRC is the builder in this case.

The loans, for construction and for developing the requisite infrastructures, given to the DMRC in tranches connected to each phase of construction, were for a period of 30 years with a ten year moratorium on repayments, work began in 1998, phase I was completed in 2006 and according to the Hindu, dated Aug 7th 2010, quoting DMRC officials, DMRC had begun to repay the interest and return the principle in tranches from 2007.

Do you see what I see – the DMRC must be making substantial profits, otherwise it cannot pay interest and start repaying the principle in tranches.

If the DMRC is doing all this within nine years of putting spade to earth, it is a phenomenally efficient operation. Not only that, it must be making pots of money because it is being able to return more than Rs 500 crore to JICA within nine years of commencement of work in 1998. The DMRC could not have started repaying loans before paying its electricity and water bills, salaries for the staff, contractual payments to the Central Industrial Security Force (CISF) and meeting all other costs. So unless it was paying to JICA from the loans that it was taking from JICA, something that will be impossible to hide, the repayments would come from profits and substantial profits at that.

Now if you are able to do all that while expanding at break-neck speed, an activity that would need substantial expenses and capital investment, it would not be wrong to assume that within a decade of completing the last phase, the DMRC will be totally debt free and will then sit back and count the net flow.

This would become possible only if DMRC were in the black from day one. It therefore would not be wrong to assume that the cost of tickets was always way above what it should have been and that the DMRC was given access to land much beyond its need, so that it could exploit that land commercially.

Once the DMRC pays off its debts, most of which it would already have paid before the end of the last phase, all it will need to do is to replace old stock, carry out maintenance, pay salaries and running expenses and upgrade. Even if 70% of all DMRC revenues went into taking care of these liabilities after repaying the loans amount, it would be making a 30% annual profit. And that is a huge margin.

Just look at the sources through which the metro earns revenue – ticket sales, advertising, rentals from the large number of malls that the metro is building, collection through fines for doing anything that the metro does not like and the latest, DMRC housing that it will build and sell to those who have the money. The housing will be built on land that it has acquired through the subsidiary loan provided to it by the government for this purpose alone. Land that could have been used for public utilities had it not been so generously handed over to DMRC for profiteering. 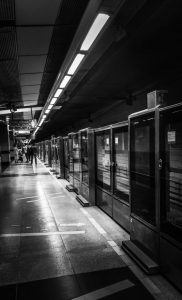 Going by the above, one would think that the DMRC’s protestations about living in strained circumstances are a ruse to maximise their profits. All periodic pronouncements that the metro will have to shut shop unless it is allowed to jack up the fares are nothing more than hyperbole. This constant crying wolf is essentially to pre-empt all criticism of the spiralling ticket prices and to use this subterfuge of strained finances to get away without providing a whole lot of facilities including free toilets and free drinking water.

Par for the course

Let us take two other aspects of the metro, aspects that deal with how the metro presents itself to its users. We had touched upon one of these aspects briefly last week and the other also needs some attention.

The issues are the physical appearance of the station and the policy that governs the naming of the stations. The most brazen example of playing sycophant is the renaming of the Race Course Station. Why does a government owned enterprise try so hard to appease someone who everyone may forget, come the next elections, is just a reflection of how low we have sunk? Pay close attention, the station was Race Course Station and not Race Court ROAD Station, the name of the ROAD was changed to Lok Kalyan Marg and not of the RACE COURSE, so what was the need to change the name of the station, even if there was a demand, though one does not recollect such a dumb demand ever being raised. The change could have only been done to show that the DMRC was not to be left behind in this popular game of sucking up to power.

Those incapable of making anything new specialise in destroying or renaming things that have existed from before and there are enough examples of this in the case of the metro itself.

We will begin from Race Course Station once again. Look at the physical location of the station, it is right next to the Tughlaq Road Police Station, at the junction of Tughlaq Road and the now renamed Aurangzeb Road. Maybe it was too much to expect the naming authorities to choose Tughlaq Road and god forbid Aurangzeb Road, but why was the station not named Tughlaq Road Police Station? This is a historical police station it is here that the man who assassinated the Mahatma Gandhi was lodged before being transferred to prison. It is here that the FIR of the assassination of Bapu was recorded.

We have a metro station within 50 metres of the police station and the DMRC does not find this fact worth recording and mentioning but it has the time and energy to name the place after a race course that is more than a kilometre away and then to change the name for no reason other than to satisfy its desire to earn brownie points from an establishment that is itself in desperate need of as many points as it can earn. One more example of this penchant for naming stations arbitrarily is to be found in the naming of the Chhatarpur station. The station is located at Andheria More but is named Chhatarpur, after a village located more than two kilometres away.

The desire to sell anything that seems to overwhelm the movers and shakers of DMRC is on naked display in the renaming of the Vishwavidyalaya (why not Delhi University as everyone calls it) station into Honda Vishwavidyalaya and the IIT into FIITJEE-IIT , a disclaimer was put only when the courts intervened after a PIL filed by the IIT. Nathupura becomes Guru Dronacharya and Gurgaon follows suit.

If this is what they mean by changing Delhi, then they are doing a fairly good job. They are creating new histories, new vocabularies, giving new meaning to old words. Connaught Place becomes Rajiv Chowk. Those who gave the suggestion and those who complied do not know that a chowk is a crossing of two roads where as the inner traffic circulatory at Connaught place, now known in DMRC speak as Rajiv Chowk, has six radial roads.

One can go on about this dim-witted renaming but it is more of the same.

Before concluding, a few words about the insensitivity to the city that the metro has decided to change – as mentioned in the piece last week, the metro is supposed to work unseen and unheard and all over the world it tries to merge with its surroundings. But in Delhi, not at all.

Except for the Udyog Bhawan, Rail Bhawan, Krishi Bhawan, Red Cross Road gates of Central Secretariat metro station, (which too should have been named Rail Bhawan or Krishi Bhawan), there is no attempt to build gates that are in harmony with their surroundings. And even here the colour of the stone that should have been buff is red. The less said about the other stations the better – grey granite at Chawri Bazar and Chandni Chowk, red sandstone at Mandi House, steel and glass outside Red Fort, steel and glass at Civil Lines, the horrible green roof placed virtually atop Kashmere Gate.

Not only is there a lack of sensitivity to the built heritage and the surroundings, there is total disregard of the architectural ethos of the city. This cannot be an accident, it is a deliberate plan to distort and destroy the look and feel of the city forever.

Who are the architects of these monstrosities and why they are hell bent on destroying a 1,000 years of built heritage is something that they and their employers alone know, if at all.