The Delhi Development Authority Demonstrates How to Kill a Forest

Efforts to systematically clear the reserve forest's undergrowth, install benches and flower patches to make it appear like a garden are damaging the vast reserve of natural resources. 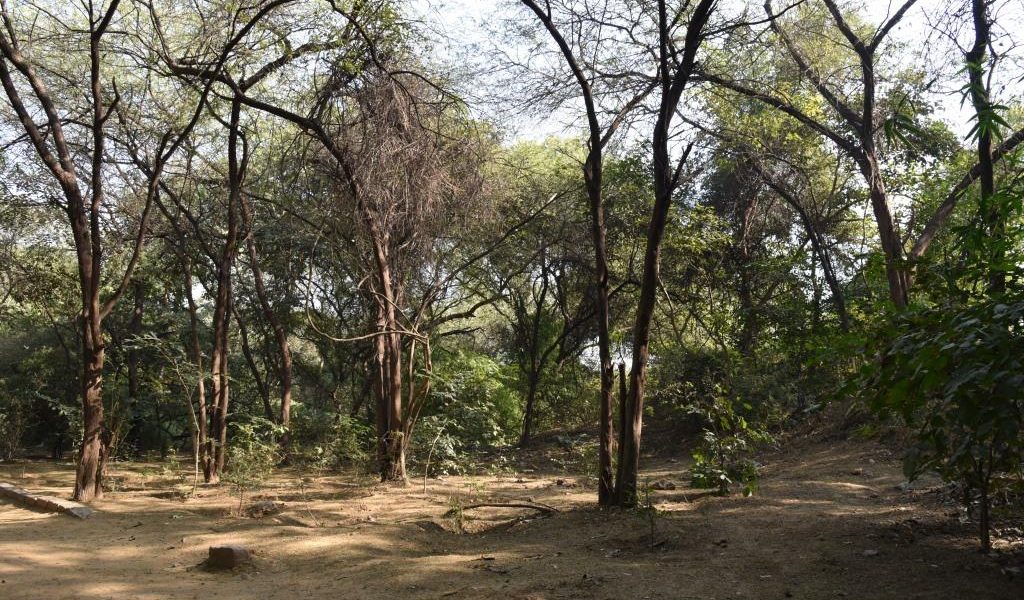 A forest is chaotic and uneven. Trees, shrubs, scrub, grasses and creepers grow all over, following no discernible logic. Forests like the Mangar Bani have a handful of species, like the dhau, dominating large stretches. Other forests are abound with a seemingly endless variety of greenery.

Step into the minuscule natural forest cover in Delhi and you will witness this chaos. During the monsoons, any of the ‘protected’ forests of Delhi resemble a kaleidoscope of bamboo and banyan, peepal and sheesham, dhak and hingot, keekar and ker-sangri, aak and dhatoora, beri and meswak, ulloo and neem, ronjh and a whole range of grasses growing all over the place, with creepers entwined around everything stationary.

Also Read: To Find a Story Under Every Old, Big Tree – Even in Delhi

There are tall trees and small trees, shrubs and bushes, growing layer upon layer. Beneath all these layers are little plants that hug the earth, creepers that connect the smallest plant to the tallest tree.

Above the lowest shrubs are butterflies, moths, hornets, dragonflies and other flying insects. Beneath the lowest shrubs and earth-hugging thorny bushes and bramble is the undergrowth, teeming with all kinds of creepy little things: bugs, beetles, ants, crickets, grass hoppers, spiders, slugs, centipedes, millipedes and scorpions. Many of these creatures, both above and below, pollinate the plants and trees and also feed the quail and the partridge, the crow pheasant, the jungle babbler, the jackal and the hedgehog and many other denizens of the undergrowth.

The grasses, the leaves of many trees and the fruit of the hingot feed the blue-bull. The field rat and the squirrel live off the seeds of many plants. The rhesus monkey and the jackal make a meal of almost everything: eggs of ground nesting bird’s like the quail, partridge and lapwings for the jackal and tree nesting birds for the monkeys and hatchlings, frogs, berries, large beetles and much else besides, for both of them.

All this and much more is a forest.

What is a garden?

A garden, on the other hand, is a different ball game altogether. A garden and a forest have only two things in common: fauna and the land on which they grow. A garden is marked by green manicured lawns, orderly rows of trees, clearly marked walk ways, little shrubs and flower beds.

The two occupy different worlds. Both have their uses. Gardens provide aesthetic pleasure to those who have the leisure, forests give us many things even when we don’t go seeking them: oxygen for example. A thickly wooded patch releases the same amount of oxygen, absorbs carbon dioxide and traps carbon dust and traffic noise in a day that the entire greens of the central vista may not be able to in a whole year. As opposed to the forested patches around the out-crops of the Aravalis, the only life that the India gate greens support is the litter, plastic and bi-peds who describe themselves as an intelligent social animal.

Why have we have chosen to foreground the distinction between the forest and the garden? The reason is rather simple. Efforts are afoot, even as we write these words, to surreptitiously convert a reserved forest into a park. This systematic act of vandalism is being performed by the Delhi Development Authority (DDA), the very agency tasked with the responsibility to protect them. 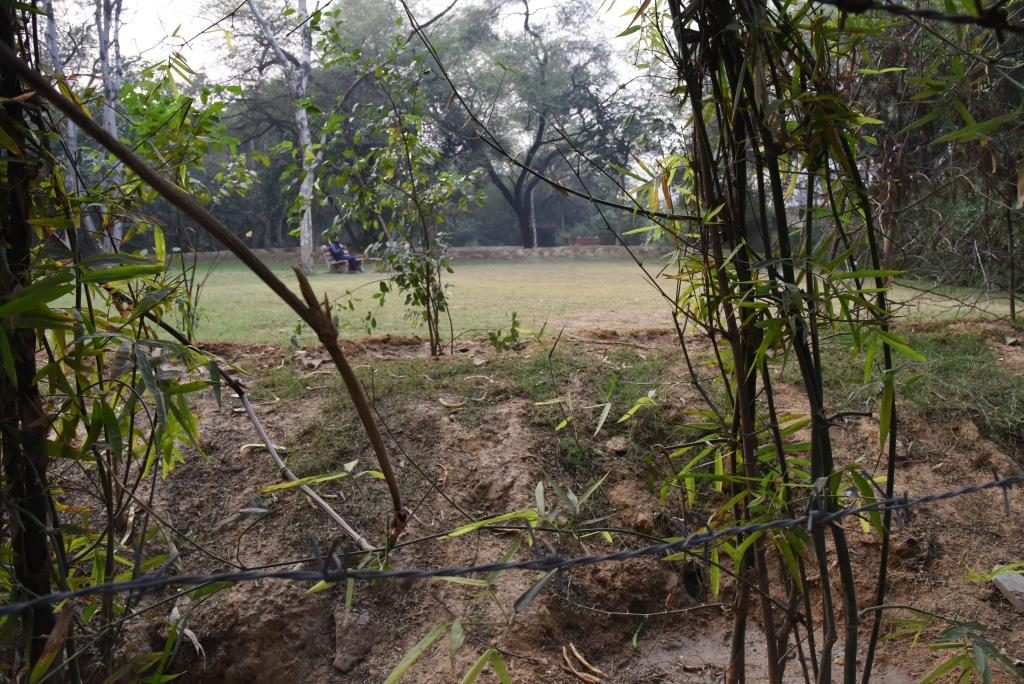 New, non-native trees have been planted by the DDA. Credit: Sohail Hashmi

The systematic destruction of Delhi’s forests

The slow but systematic destruction began a few years ago, when a rather pompous gentleman – too full of his own importance and well-connected – informed everybody that he had adopted it and was going to save it. Very soon, things began to change. Under his intervention, the highest point in the forest was named Tejinder Khanna Point, after a former Lieutenant Governor of Delhi.

This act ensured unquestioned acquiescence from the DDA for the adoptive father of the forest. A guard post appeared at the gate opposite ICSSR on Aruna Asif Ali Marg. Sign boards appeared at every turn, everything began to be painted. The entry opposite ICSSR, favoured by the residents of Vasant Kunj, came in for special attention, it got sandstone steps and a sandstone landing.

Also Read: For Its Great Air Quality, Delhi Should Never Have Thought of Cutting Trees

Let us assume that maybe they were trying to make the forest more inviting. But what began to happen inside was more than a little odd. The little patch of grass inside this gate sprouted a bunch of trees. A sign declared that the same trees were planted at Panchvati and meditating beneath them cures many ailments and purges harmful thoughts. The undergrowth around the little patch of grass began to be cleared and now there is a vast undulating, landscaped lawn that welcomes all visitors.

On a recent visit we discovered that this clearing of the undergrowth that began at this gate has spread across the reserved forest. Large swaths of the forest have now been cleared of all undergrowth. Benches have been placed for people to sit on. Empty potato chip packets, plastic cups, wrappers of all kind can be seen dumped around.

Trees not native to Delhi like kath sagon, papri, saptparni and the famous five of Panchvati and flowering shrubs that do not belong to Delhi forests have been planted along the walks, as have alien species like bougainvillea. The worst that could have been done to the forest is the systematic planting of Prosopis juliflora, an invasive tree from Mexico that environmentalists all over South-Asia are trying to get rid of since it destroys all native vegetation by depositing alkaloids into the soil. A bill-board was erected in the forest listing the trees – including the juliflora – planted to rejuvenate the forest.

Also Read: Compensatory Afforestation Is Not the Ultimate Solution to Delhi’s Tree Fellings

The campuses of NCERT, IIT, JNU and the sprawling residential locality of Vasant Kunj line the forest. Many of the residents of Ziya Sarai, Adchini, Katwaria Sarai and Ber Sarai go to this forest for their morning walks, some with their dogs. All of them benefit from the free service it provides as an air filter and an aquifer.

The trouble is, nobody is bothered at this wanton destruction of the forest, the rodents, the birds and the insects who lived in the undergrowth. The blue-bulls and the jackals, with no place to hide, begin straying onto the streets, dazed, lost and are being run over.

Sohail Hashmi is is a filmmaker, writer and heritage buff. He organises regular heritage walks in Delhi.