The DDA proposes to hold this hearing on February 6 and 7, at a short notice of one day. 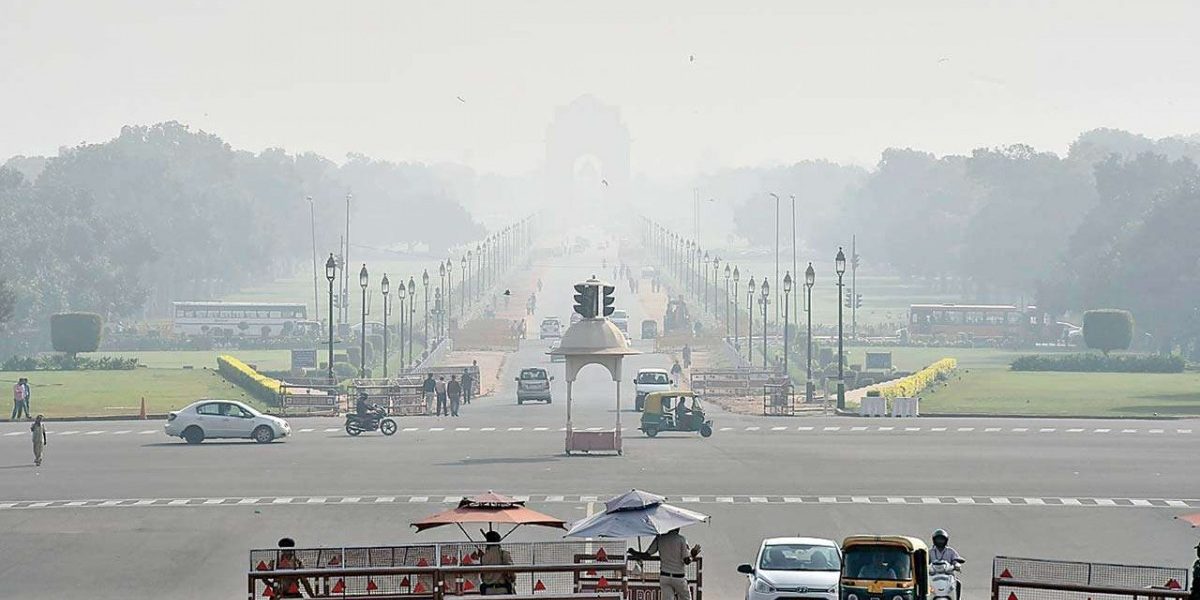 The Delhi Development Authority (DDA) published a notification in newspapers on February 5, 2020, regarding a public hearing on the proposed land use changes to make way for the Prime Minister’s dream, a revamped Central Vista.

The notification asks those who submitted their opinions to the land use change notification put out in December 2019, to “present his/her oral evidence in person” on February 6 and 7. 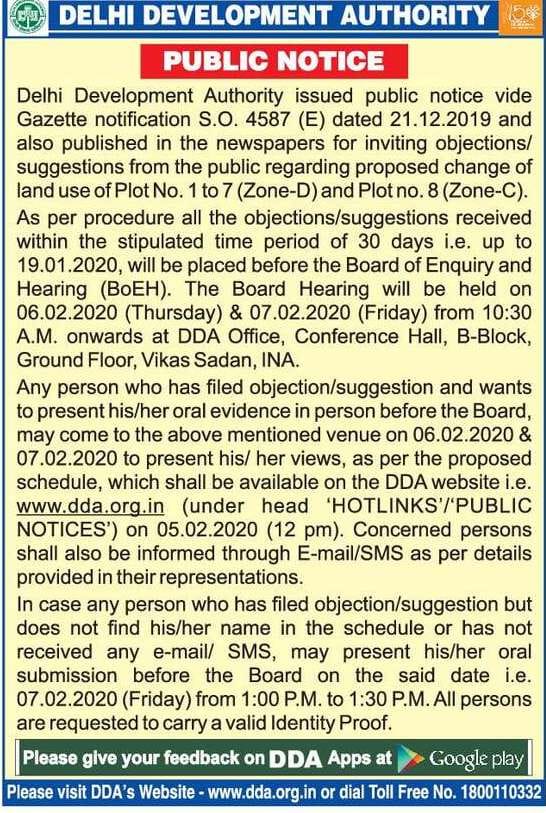 The Central Vista redevelopment project involves the creation of a new and bigger parliament building, new residences for the prime minister and the vice-president near the South and North Blocks and the demolition of the existing buildings along the two sides of the Rajpath, to make way for a concentration of about 10 government building complexes in this space.

These changes could mean the loss of the IGNCA, the National Museum, the National Archives and the public and social nature of this iconic landscape of the India.

Specifically, the land use change for this over 100-acre project involves converting at least 80 acres from public uses to restricted government use. DDA’s notification of December 2019 had proposed to make these changes official.

The speed at which the government has moved on this project makes it appear as if it is most urgently needed.

The CPWD floated a request for proposals in September 2019, chose a designer in October and since November, some scanty details of this project have been publicised through media articles which quote government officials and ministers.

The designer of this project, Bimal Patel has also spoken to select audiences in different cities. He has stated on all occasions that this project “is evolving”. However, the government aims to float tenders for construction this month and complete the project between 2022 and 2024.

In this context, the government’s plans have become contentious on a few counts. This is to be expected given that central vista is a valuable and living heritage precinct and a historical monument.

The Central Vista is a much-loved open, social space in this planned capital city that is so unequal and unjust to its poorest residents.

Following the DDA’s proposal in December to change land use of the Central Vista, over 2,000 people wrote to the DDA opposing this move. They see this as an attempt to grab one of the most public spaces in Delhi.

It is also seen as an arbitrary move by the DDA to legalise this project and accommodate it within the Master Plan even before the project is assessed from any point of view – social, environmental, financial or heritage. The project supposedly aims to achieve better government and parliamentary efficiency through these structural changes but there are no detailed government reports of what is wrong with the present structures and why only new structures would solve their problems. 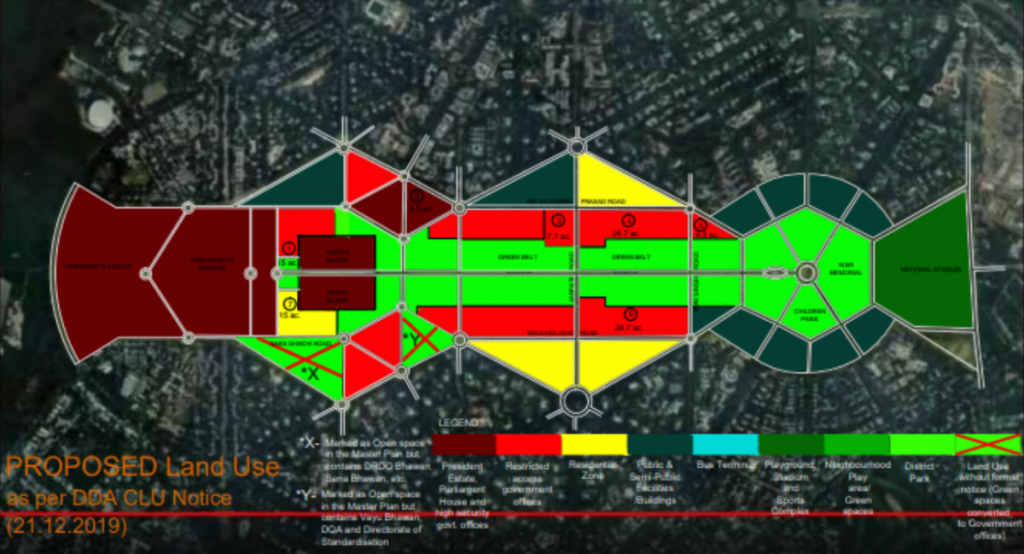 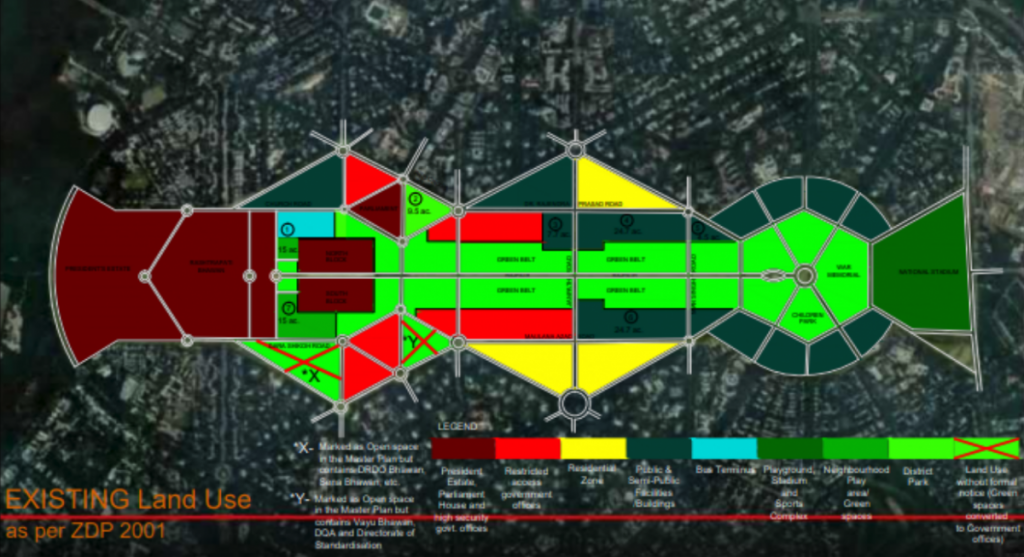 Existing and proposed land use of Central Vista.

The DDA proposes to hold this hearing on February 6 and 7, at a short notice of one day.

The invitation has thrown all those concerned about this project into a tizzy as they would have to make it, from wherever they are on work or travel, to this one and only consultation by the DDA.

The DDA’s implicit assumption is also that the Central Vista, a national icon, is only of concern to people based in Delhi even though people from out of town sent their submissions. The consultation is to be held on working days making it impossible for those with jobs to attend unless they take leave at short notice.

The DDA has also not invited all those who wrote opposing the land use change to the hearing. The invitation is selective and has gone only to 1,292 of those who actually submitted their views.

According to the DDA, these invitees are expected to place their comments within nine hours spread over two days. That means each individual is allowed precious 2.5 minutes to make their point!

All of these aspects lead one to conclude that the DDA is really uninterested in a genuine public process to hear all the views on the land use change for a project of such great importance and consequences.

The DDA could have simply given wide publicity and adequate time to this process to enable a large number of concerned people to at least voice their views. It could have hosted this consultation over a weekend to make it convenient to the public to attend.

There are several wonderful models of consultative processes which could have been considered to achieve wide public participation. But the DDA has simply followed its routine way of doing things.

Hundreds of land use change notifications are treated in this manner in Delhi. These result in children’s parks being turned into parking lots, ecologically sensitive areas being used to build malls and residential areas being commercialised on a large scale.

Manju Menon and Kanchi Kohli are with the Centre for Policy Research.