'The Gods Can Simply Kill Us': A Ground Report From a City that Weathered a Deluge

Thousands of trees have fallen across Kolkata roads, virtually blocking nearly all roads. 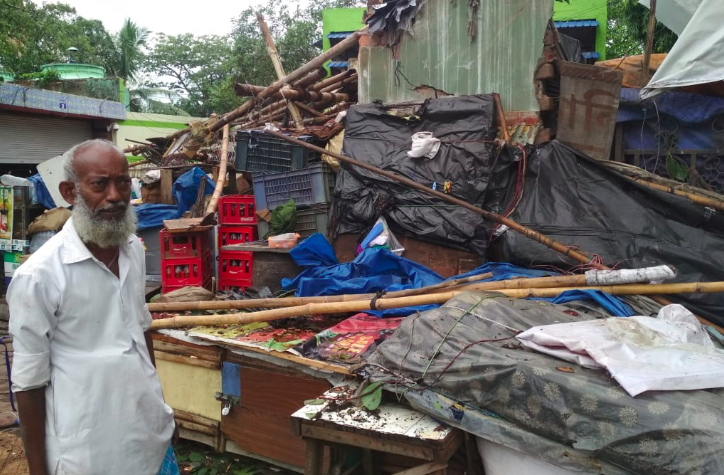 A man assesses the damage to his shop in Kolkata in the aftermath of Cyclone Amphan. Photo: Himadri Ghosh

Kolkata: “The gods can just simply kill us. Why put us through so much pain?” Babul Naskar asked of The Wire on Thursday afternoon.

Naskar used to own a small, roadside tea stall near Ultadanga in Muchibazar. On Wednesday night, his stall was crushed under a big tree as the Cyclone Amphan wreaked havoc in several parts of West Bengal, including its capital Kolkata.

“Since March 21, I could not open my shop due to the lockdown. I reopened the shop on May 18, and in two days, it is completely gone. Where will I go now? How will I feed by family?” Naskar said, in tears.

Amphan made landfall near the Ganga Sagar Island in West Bengal’s South 24 Parganas district between 2:30 and 3 pm on Wednesday. Kolkata, North 24 Parganas, and South 24 Parganas were the most affected, the regional office of the India Meteorological Department has confirmed.

A senior officer at the West Bengal disaster management and civil defence department said, “Preliminary reports suggest thousands of mud houses in the coastline areas of West Bengal are damaged. Some of the low-lying areas of South 24 Parganas have been inundated. Embankments in many areas have washed away. However, we will need 2-3 days for the complete assessment of the damage.”

As of Thursday evening, the official figure of casualties due to the calamity stood at 72, including a 13-year-old girl. However, various sources confirmed that the fatalities could be much higher and the information on that is not reaching them as communication is lost in many affected areas.

Hours after Amphan’s landfall in Bengal, chief minister, Mamata Banerjee spoke via video conference and said, “The entire south Bengal is hit. North and South 24 Parganas are finished. We need to rebuild Bengal from scratch.” 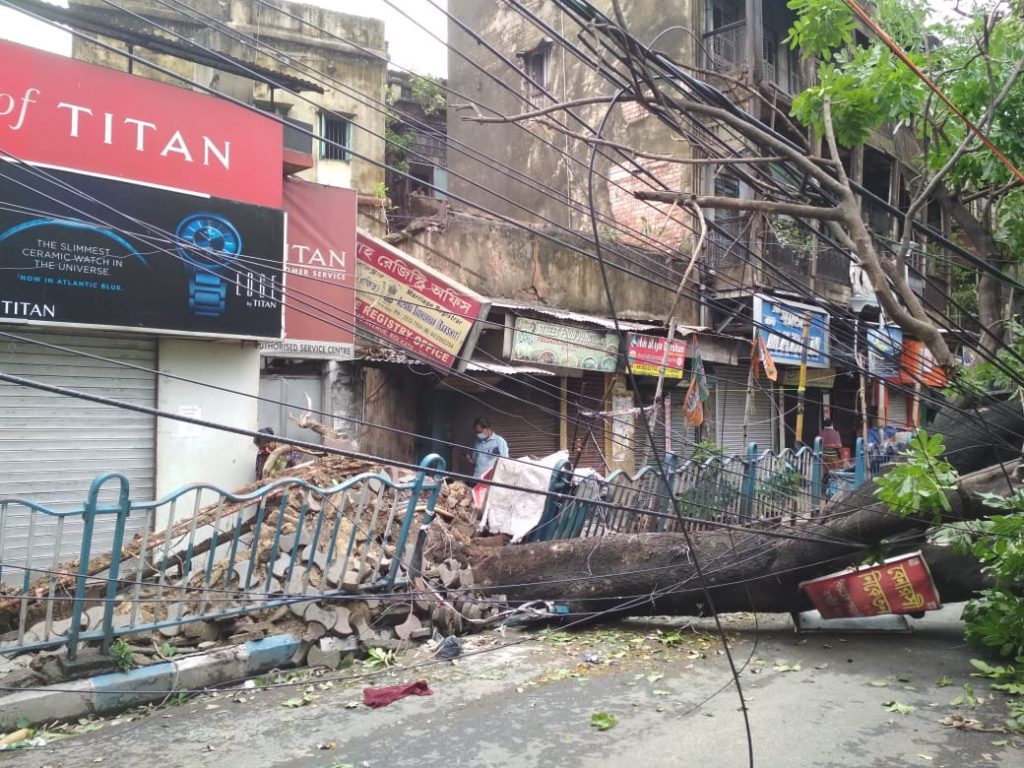 To understand the nature and the scale of damage, The Wire, on Thursday morning, visited various places of north and south Kolkata.

Across the city, roads including the whole stretch of CR Avenue was blocked in multiple locations by fallen trees. A senior official of Kolkata Municipal Corporation, who didn’t wish to be named, said, “According to our primary assessment, 1,000-1,200 big tress have fallen within the KMC jurisdiction. We have engaged several teams in cutting and clearing the trees.”

The reporter met Sujoy Biswas near North Kolkata’s Sovabazar, who was tasked to collect the remains of a traffic signal’s operating box. “I stopped counting after 106,” Biswas said, referring to the boxes he has collected.

“Almost all signals have fallen from Sinthi more onwards, which is several kilometres to the north of the city,” he said. In a small tempo, he is headed towards Esplanade, the city’s centre.

A few hundred meters south, a 35-year-old Shitala temple had fallen. This part of Kolkata is the oldest in the city and some of the buildings can be traced back to 250-300 years. 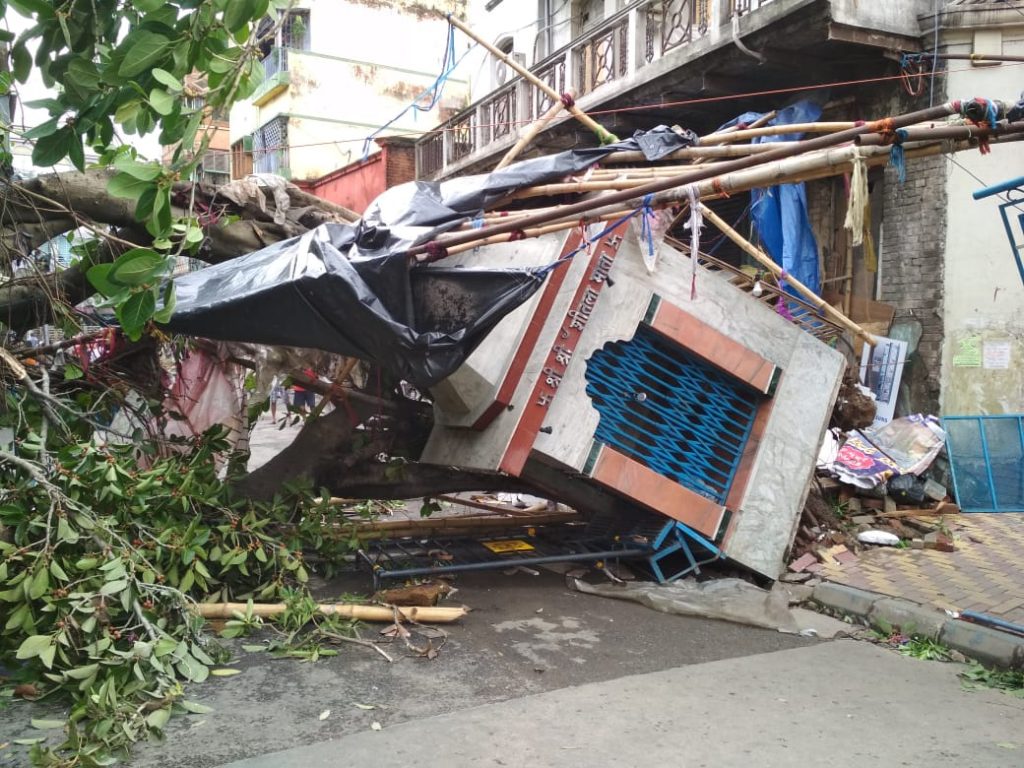 A 35-year-old Shitala temple that had fallen. Photo: Himadri Ghosh

Every few metres, we witnessed a big tree down on the ground. Trees blocked entire roads.

Right outside the gate of Esplanade metro station, we witnessed a feeble old man trying to cut small branches of a big trunk that had fallen over his shop. Sixty two-year-old Naseem Ahmedh owns a purse shop. “I live here. Yesterday, I was here till the storm was bearable. After that I moved into the ATM. And, soon after this big tree fell over the shop.”

Next to Ahmedh’s shop was Munna Shaw’s pan shop. “Whatever little stock I had is gone now. The tree has brought down the entire shop. Anyway, the coronavirus has finished our business, whatever little we had, this storm has even snatched that.”

Next, we met Parmimal Sengupta, an emergency personnel deployed by Kolkata Corporation to cut fallen trees, who said, “We have seen many cyclones, but nothing can be compared to this. I am on duty since early morning. I can’t give you any numbers but, till now my team has cut a minimum of 50-60 trees.”

Move a little further from Park Street, one can find the iconic Tata Centre. We spotted a big tree uprooted in front of the main gate of one of Kolkata’s oldest highrises. 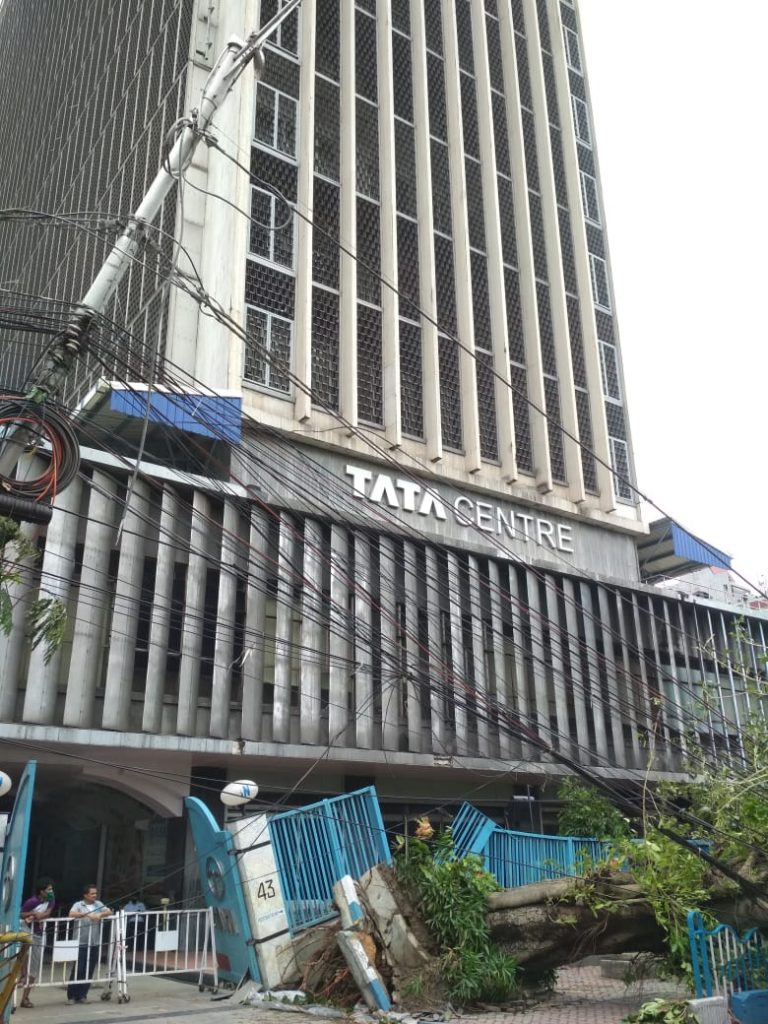 A tree uprooted in front of the Tata Centre. Photo: Himadri Ghosh

The series of hawker shops that line the Rabindra Sadan metro station and the usual eateries are barebones now.

We meet one Rajesh Jadav at Jadubabur Bazar in Bhowanipore. He had lost a vegetable cart. “I had borrowed a chain from a friend to tie up my cart. After the storm stopped, I went looking for it and found it gone,” Jadav said.