The park provides a blueprint for the transformations taking place in public spaces across the city under the guise of development. 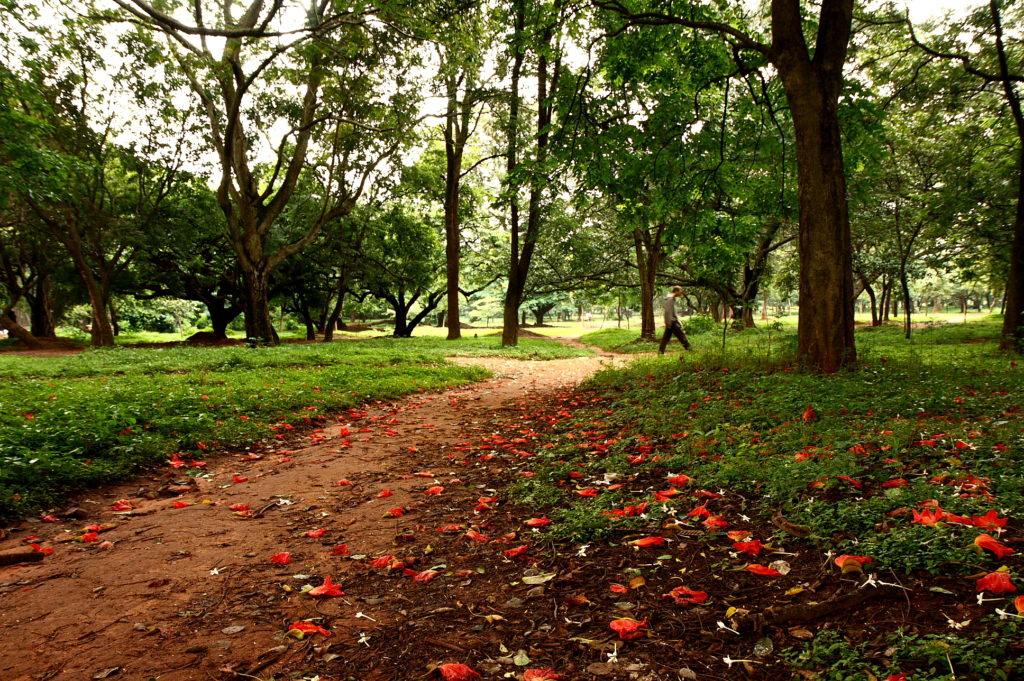 In 1666, the Great Fire of London had reduced the city to ashes. The catastrophe, however, provided its architects with a unique opportunity – to recreate London. Blueprints were drawn and plans were made to reinvent the city both spatially and conceptually. The architects believed a change in the materiality – the physical aspects – of the city could fashion a more civilised citizenry. The chaos, the crime and the grime that was London before the fire was perceived as a direct threat to the established order.

Through the examples of a newly constructed sewage system, well-planned grids, wide roads and enclosures, the London that the planners wanted to create was one where the ‘barbarians’ would be forced to the periphery of the city. An acquiescing law-abiding public would make London an exemplary city of the powerful West.

There is no fire in Bengaluru. In the 21st century India, the city is at the epicentre of the visually perfect globalised world. Much like in the London of the 18th century, sprawling gardens, wide roads and magnificent buildings are signs of progress and growth. Bengaluru’s IT boom has come and gone and the city has few euphemisms left to describe itself, what with its traffic congestion and depleting land. It’s a crisis of a very different kind. How then does Bengaluru remake itself? An examination of the city’s public spaces holds some clues.

Cubbon Park has always occupied a position of symbolic importance in the imagination of Bengaluru as the ‘Garden City.’ The park that defined this colonial cantonment was created in 1870 and was initially named Meade Park. Spread over 300 acres, it houses the landmark red buildings that have been there since its inception – Attara Kacheri, which now houses the high court, the Central Library and the Visvesvaraya Industrial and Technological Museum, the oldest museum in India. A Queen Victoria statue guards the entrance on one side, while the state legislative assembly – Vidhana Soudha – is opposite another. The park is a popular tourist attraction and a prominent historical marker in the city. It is also prime real estate which is why it has found itself in the middle of one too many tussles over land.

At present, the state has plans to make rapid changes to the park to mould it into a template for a new Bengaluru. As the case with London shows, plans to change the nature of a public space usually signifies a plan to change its publics, which becomes an exercise in determining who legitimately constitutes the ‘public’ whilst excluding all others who cannot fit into this categorisation.

Cubbon Park provides a blueprint for the transformations taking place in public spaces across the city – marked by an increase in public-private partnership, the growing control of citizen-led groups that protect casteist and classist concerns and a change in the design and architecture of public spaces – all of which determine access to and functions of these spaces in the city.

The idealistic concept of a public space is that of inclusivity and participation. It is often understood as being integral to the idea of a functioning democracy. Space is an actual ground or site in a democratic setting. A public park is characteristic of this public space where the boundaries of private ownership and property dissipate to allow for multiplicity and diversity. At least this is what one envisions a public space as. The current push in Cubbon Park, however, is reminiscent of a colonial logic of who comprises the ‘public,’ shaped by claims of land ownership and other exclusionary forms of control.

There are two preliminary questions that need to be answered: who has control over the park and what are the current contestations to this power? The overseeing authority of Cubbon Park is the state horticulture department. The Karnataka Parks and Preservation Act, which states that no land or building within the park’s purview can be alienated by way of sale, lease, gift, exchange or mortgage, was introduced in 1975 to preserve the park.

It is not difficult to imagine why this provision would cause discomfort, particularly in the present economic climate. Cubbon Park, encircled by various seats of influence and power, occupies prime real estate. However, since 1988, the park has shrunk from 300 acres to 197 acres. Legislative amendments made to the Parks and Preservation Act from the 1990s reveal that an encroaching government is hard at work. The Karnataka government has issued five notices to reduce the park’s boundaries in order to build roads and facilitate other ‘development’ related work. 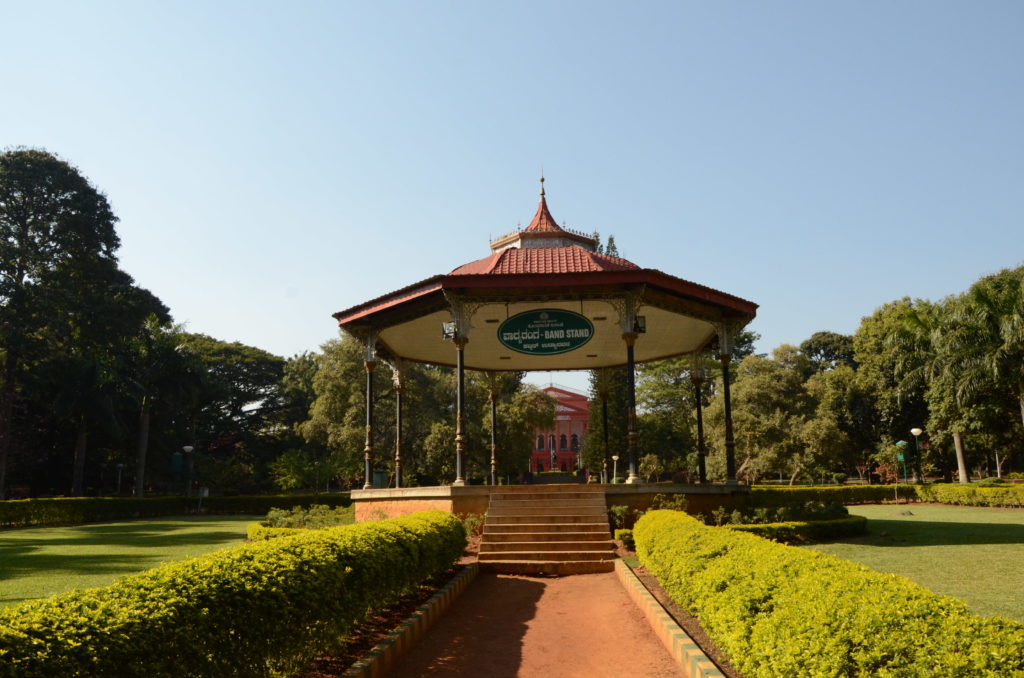 The story continues. In 2010, the Act was amended to ensure the smooth arrival of the metro into the city. The amendment successfully alienated a few acres on each side of the park to make room for the metro station. Finally, in a sweeping cabinet decision in July 2015, the government excluded 27 government buildings and the space surrounding them from the park’s boundaries, among them the Karnataka high court, the Election Commission office, the General Post Office, the Visvesvaraya Museum and the press club.

According to the government, these exclusions were necessary to conduct renovations and expansions with ease, without being curtailed by the Act’s provisions. In effect, what the government decision has done is to create a comfortable environment for encroachments. As the park gets parceled out to the highest bidders, its position as a ‘public’ space grows more tenuous.

Additionally, the buildings that have been removed from the park’s area exercise greater control over what happens in the park itself. For instance, security issues that are of concern to the Vidhana Soudha and high court translate into a higher security presence in the park. Loud music cannot be played in the bandstand during the day because it may disturb court proceedings. The Department of Culture has free rein to organise classical dance recitals and music concerts on Sundays, but nothing ‘filmy’, ‘loud’ or ‘western’ is allowed.

The arbitrariness of these rules indicates a deeper cultural control that is being exercised over the park. Trees are felled for widening the road because of the government buildings in the area. Again, the changes signal how the changing physicality or materiality of the park changes who accesses the park and how it is used. This also means that what was once a public park now becomes just a ‘garden.’ It is crucial to note here that despite strong protests; these changes have been brought about.

It is crucial to note here that despite strong protests; these changes have been brought about.

While the government plays monopoly with the external boundaries of the park, a different kind of ownership is being exercised within. The Cubbon Park Walkers Association, comprising a choice mix of local celebrities, politicians, government authorities and corporates, have been pushing for changes in the park by means of protests and petitions. In its quest to contribute to society, the association has been lobbying tirelessly since 2012 to rid the park of ‘illegal activities.’ 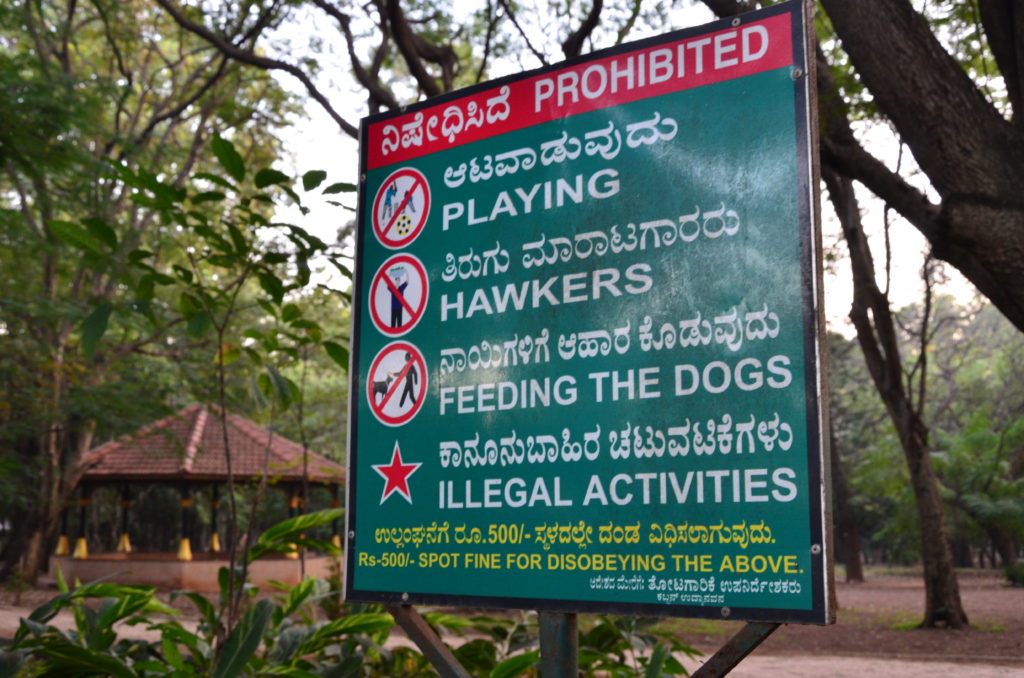 Cubbon Park Walkers Association has been lobbying tirelessly since 2012 to rid the park of ‘illegal activities.’ Credit: Prashant Parvatneni

In a brief interview, the association president, S. Umesh, stated that the park is largely meant for the purpose of walking. They are responsible for the ban on throughway in the park on Sundays, they lobbied for Carnatic music at the bandstand on Sundays and their permission is required for organising events in the park. Now the association is pushing for increased security by way of having CCTV cameras and more security personnel in the park.

Umesh and the association represent a particular breed of civic activism that is gaining precedence in the discourse around public space. The association members’ imagination of the park evokes visions of high fences and manicured enclosures where any experience of this park would be mediated through licenses, permits and registrations. In its zeal to ‘rejuvenate’ the park, the Walkers Association has approached various corporate companies to take ownership of specific sections of the park.

Umesh’s plans include ‘lakes’ and an open-air gym in the park – all for the benefit of the walkers. RMZ corp has already taken over a section of the park (thereby restricting access to the public) and there are deals with Tata Consultancy Services in the pipeline.

This innocuous sounding blueprint of the gentrification of the park excludes an entire community of people who for decades have accessed it for various purposes. Among them are vendors such as balloon and peanut sellers who have been accessing the park for years and who suddenly find no place in the park. Huge signboards declare the park a no-vending zone. Now, with a slow increase in the number of Hopcoms – government-run vegetable and fruit stalls – in the park, these vendors can enter the park only by paying bribes to security guards, courting the additional risk of being beaten up. 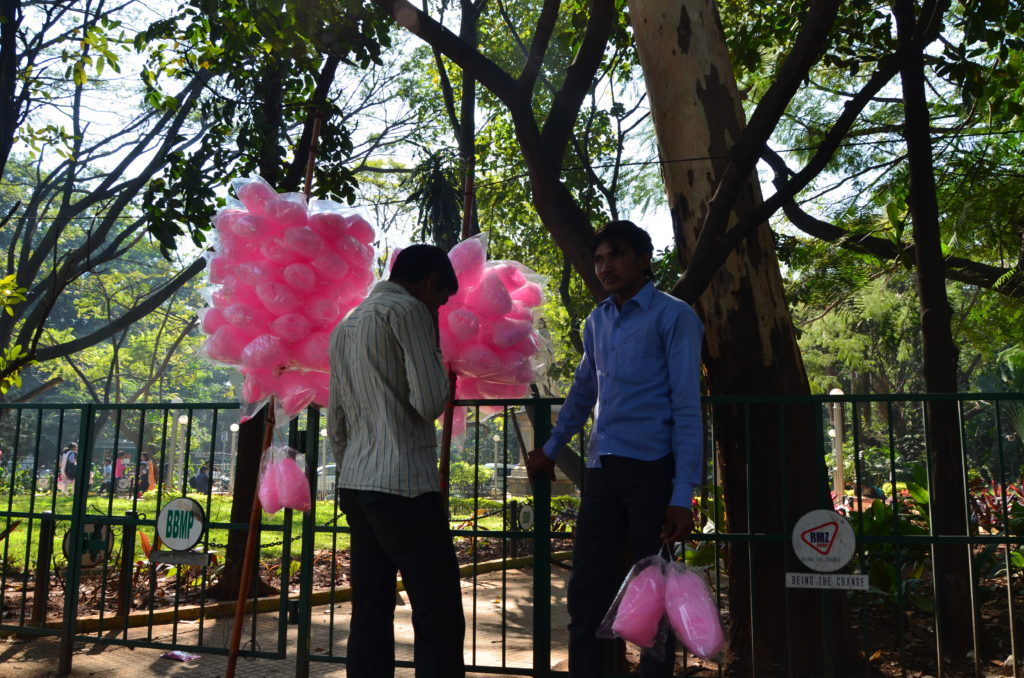 The homeless who for many years have found shelter under the park’s trees are not welcome just as the lovers who are bereft of spaces in the city. Moral policing, arbitrary evictions and harassment are among the experiences of those who aren’t deemed ‘suitable’ for the park.

The Walkers Association sees itself as doing social work. Its restrictive view constitutes the ‘public’ in a way that runs counter to the principles of inclusion or democracy. As such, Cubbon Park, rather than allowing for diversity and difference, has begun to embody the aspirations of a particular model of urban development which inevitably leads to gentrification. Gentrification does not undo the presence of an undesirable public, all it does is make them invisible for those who have a greater degree of political agency to whitewash or ‘beautify’ the city.

Yet, within the park, there still exists a plurality, realised through everyday practices of resistance against the binding control of the state and the Walkers Association. It is important to look at these transgressions to subvert the ostensible ‘popular will’ in public space. Matters have not reached a stage where the lovers stay away because of the CCTV cameras. Despite the heightened moral policing, the park continues to be frequented by couples for whom the city at large continues to be an inhospitable space. These various contesting claims lay bare how embattled a concept democracy is.

The ‘polite project’ of the architects post the Great Fire of London did not succeed in creating the utopian city of their dreams. Even as they rebuilt the city, they realised that the presence of the people changed the city even as it was being rebuilt. The lived experience of a space can run counter to the representations of the space.

The nuisances of Cubbon Park may have been pushed to the periphery, but unfortunately for the park’s well-wishers, they continue to exist. Cubbon Park then makes a unique case for a public space of transgressions and contradictions in the face of an active push towards its gentrification.

Angarika Guha and Shruthi Menon work with Maraa, a media and arts collective based in Bengaluru and Delhi that works extensively on democratising usage of urban public spaces through creative practices. This article was developed out of Maraa’s annual festival of creative practices, October Jam, located in Cubbon Park this year.