After the Pandemic, Will We Rethink How We Plan Our Cities?

The COVID-19 pandemic is not a crisis of the city, but the crisis of a certain kind of city. 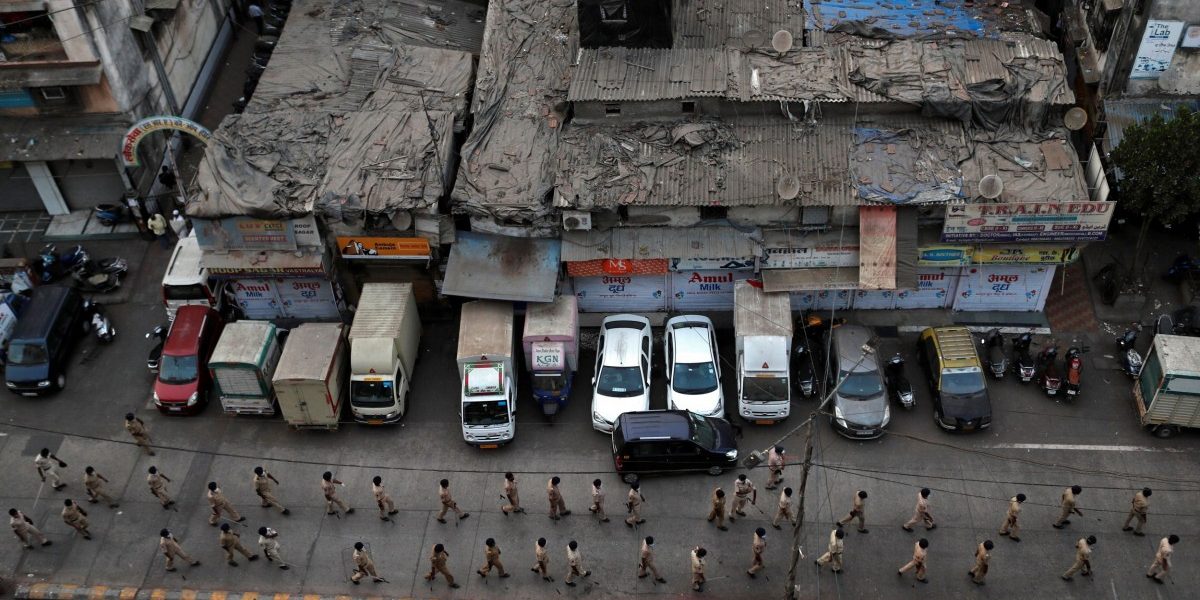 Police officers march through a street in Dharavi, one of Asia's largest slums, after a nationwide lockdown in India to slow the spread of COVID-19 is extended, during the coronavirus disease outbreak, in Mumbai, India, April 11, 2020. Photo: Reuters/Francis Mascarenhas

Between 1896 and 1899, a deadly bubonic plague swept through the city of Bombay. The “native population,” wrote a British historian, “succumbed to a pestilence, as grievous as that which swept through Florence in 1348 or through old London in the time of Defoe.” It slayed “people like sheep” – 44,984 officially – and drove away more than half a million, in panic.

The most devastated were poorer neighbourhoods, and most who fled were the among the city’s working classes.  The plague threatened the health and the business interests of the commercial and industrial elite, forcing them to see the connection between both disease and insanitation, and social policy and economic stability.

For the mill-owners, the epidemic was a threat to an elaborate system of labour discipline and control. Over the next two decades, the Bombay Mill Owners Association (BMOA) debated the question of working class housing in the city: “bad housing, and very expensive housing” the president of the Association explained “is the root cause of the migratory habits of the Bombay mill operatives.” Besides, “better housing will mean better health for the workers.” With government intervention, the city could produce housing “in a cheerful environment and sanitary surroundings” that will help in “abolishing the slums of Bombay.”

More than 100 years later, as the city grapples with the COVID-19 pandemic and a government lockdown, the billionaire Ratan Tata, in an online panel discussion organised by CorpGini – “a community of innovative corporates” – worried about the “miserable standard of living in slums with lack of fresh air, hygiene, open space, and close proximity.” Mumbai’s “redevelopment policies should be revisited to provide a better quality of life to the poor” he urged, and “acceptable standards in terms of quality of life” must be re-examined.

As we welcome these fine thoughts, the sense of deja vu is unmistakable. The last time the city’s rich and mighty worried about working-class housing was in early 1900s, when “business as usual” was disrupted by the plague. COVID-19 has got them talking once again about putting public health above private profit. The “rich men dwelling at peace within their habitations” – to quote Winston Churchill – have begun worrying about their well-being.

COVID-19 has unleashed a flood of articles across the world about city planning after the pandemic. Many have been explicitly anti-urban, since living in cities seems to be the anti-thesis of ‘social distancing’. In Mumbai, we are warned about the city’s density – 31,700 persons per square km – as being one of the highest in the world. Some have asked for a “phase-wise decongestion” of Mumbai, which, unless specified how, can only read as: “get the poor out as quickly as possible.” Dharavi, predictably, is in the firing line. “What should we do about Dharavi?” seems to be the question that has prevented ‘experts’ of all stripes from sleeping soundly during the lockdown.

It is likely – judging by these concerns – that urban life after COVID-19 may well be about an acceleration of current trends: dispossession and segregation, unemployment and insecurity, intrusive personal surveillance, aggressive policing of physical and social boundaries, and gated enclaves for the rich to ‘socially distance’ themselves from the ‘dangers’ of urban life. Or, perhaps, COVID-19 may teach different lessons, some good ones.

The origins of planning in Bombay

Urban planning in Bombay began after the plague in the late 1890s. The “horrors of the plague,” historian Rajnarayan Chandavarkar wrote, “prompted the most sustained period of state intervention in the affairs of the city.” The conditions of insanitation and overcrowding – that the colonial state neglected and justified as an outcome of ‘dirty native habits’ – could no longer be ignored. In 1898, the Bombay Improvement Trust (BIT) was set up, with the dual mandate of securing the future of commerce and industry, and providing sanitary accommodations for the poor and working classes. The BIT went after Bombay’s landlord-dominated Municipal Corporation and the city’s property owners. A prominent British bureaucrat grumbled that “insanitary rooms” were the result of overbuilding by landlords, who cared for little other than to “reap a rich harvest from [their] property” and have become “speculators in human misery.”

The answer to insanitation was light and air: “nature’s two great healing elements which everyone might have gratis ad libitum if public opinion insisted on every dwelling room having sufficient open space about it.” The Chairman of the BIT demanded a “stiffening” of the city’s building by-laws (tenement densities, set back rules, plot coverage, height restrictions). He called for a new uniform standard that would permit adequate lighting and ventilation in all rooms of every building. Landlords kicked and screamed, accusing the BIT of wanting to “convert the city into a garden city at one stroke.” So as a compromise, it was decided only new developments in the city will follow the BIT’s stringent regulations.

By the 1910s, the memory of the plague began to fade in the minds of Bombay’s ruling elite. The urgency of the BIT’s housing efforts declined. For the working classes, the housing crisis would persist and even get worse. In quantitative terms, the BIT’s contribution to the working class housing question was negative: it pulled down more houses than it built. It managed to do more in terms of land reclamation, street improvements and suburban developments than in removing urban overcrowding. Yet, the public health regulations that BIT introduced remained enshrined in Mumbai’s planning system till the 1970s and 1980s.

From then onwards, the goals of planning began shifting. The idea took hold that markets should be allowed to determine every aspect of social life. Public utilities began to be privatised. Government regulations for public health, environment, labour – characterised as barriers to growth and prosperity – were dismantled. Public health and sanitation, that provided the justification for public intervention in the pre-liberalisation era, began to be seen as constraints on market activity.

As the private sector was handed over the responsibility of implementing plans and producing housing for the poor, public health regulations came under persistent attack. To ‘incentivise’ the private sector and to make urban development projects ‘viable,’ they were relaxed almost into non-existence. Once a regulator, the state was now a development enabler and promoter. Public goals could only be fulfilled by giving more incentives to developers. Since the authorities captured a slice of what developers produced (rehabilitation units, open space, built amenities) – to enlarge the slice, the cake had to grow.

The most conspicuous manifestation of this are the city’s slum rehabilitation projects – that allowed developers to squeeze more people into smaller areas, pack buildings closer than ever before, and skirt providing common facilities to gain more land for construction. Health practitioners began to notice a high rate of infectious disease among the occupants of these buildings. Planning in Mumbai came full circle. What began as a means to forestall epidemic outbreaks and preserve public health, ironically, turned into its opposite: market-oriented ‘planning’ in post-liberalisation Mumbai made the city more vulnerable to public health crises. Public stewardship was no longer the business of government. They had themselves –  along with the developers they facilitated – become “speculators in human misery.”

Towards a different kind of planning

While there are many traditions of urban planning around the world, the roots of almost all modern public sector urban planning can be traced to social struggles against the ravages of the industrial-capitalist city. Fires, epidemics, social inequality, environmental degradation – the apparatus of progressive planning emerged as a way to forestall or minimise these failures and fall-outs of laissez faire urbanism, in the form of health and sanitary codes, safety regulations, public goods, and environmental conservation. Dense urban living may make populations vulnerable to epidemics and disasters, but cities also learned over time how to contain and minimise their hazards.

The COVID-19 pandemic is not a crisis of the city, but the crisis of a certain kind of city, where decades of “market-oriented” policies have imposed severe limits on the public planning system – health care, food distribution, housing, transport, services – to respond meaningfully to the pandemic. Crippled by decades of neglect and starved of resources, the public sector has been robbed of inspiration, knowledge, and institutional ability to come up with progressive action.

And therefore even in India, all that we get as state action to overcome the pandemic is an indiscriminate lock-down enforced with police batons, government bailout packages for the rich, and pleas to help the poor through acts of philanthropy. The government exists, it seems, only to police the poor, service the wealthy, and encourage self-help initiatives to supplant public programs. We are in a lock-down that was declared without ensuring that the food system can feed people, that the health system can test and treat people, that basic services are available to every household, and that the economic system can secure incomes for all. The consequences, as can be seen, have been devastating.

At this point, the socio-economic disaster of the lock-down in India – with countless people at the brink of starvation – may end up fuelling a “sinister synergy” between the disease and malnutrition if another wave of the virus hits the population a few months down the line. It was this deadly combination that claimed the lives of millions of Indians during the devastating Spanish Flu of 1918. What this tells us is that every aspect of a disaster, as the geographer Niel Smith once wrote – its causes, people’s vulnerability, a society’s preparedness and response – and the difference between who lives and who dies, “is to a greater or lesser extent a social calculus.”

A city’s ability to limit the scale and severity of a crisis and disaster ultimately depends on extent of popular control over decision making, the level of social equity, the quality of our public infrastructure, and the responsiveness of our planning system. Our cities are vulnerable, because we have weakened their ability to anticipate, prepare and respond to crises. They are vulnerable, not because they have high aggregate densities, but because they are highly unequal in terms of living conditions, services, incomes and access. They are vulnerable, because we have prioritised luxury mobility over livelihoods, real-estate mega-projects over ecosystem services, monetising land over community services.

The lesson the COVID-19 pandemic teaches us, if we are to recover and prepare against crises in the future, is that we need to strengthen and improve our planning system by developing public and collective alternatives to private systems. We may not be able to foresee the next epidemic, flood or earthquake, but we certainly cannot afford to let market failures determine our fate. Our broken system needs to be fixed from the ground up, with an explicit commitment to promote public health, conserve and improve natural systems, redistribute wealth and opportunity, and protect human populations from climate events.

This would mean a well-funded public healthcare system and a universal Public Distribution System (PDS). It would mean investing in public transport and public housing. It would mean progressive climate action plans and conservation and restoration of eco-system services. It would mean job guarantee programmes and basic services. And much more.

Without these commitments, we risk almost everything.

Hussain Indorewala and Shweta Wagh teach at the Kamla Raheja Vidyanidhi Institute of Architecture and Environmental Studies. They are founder members of the Collective for Spatial Alternatives (CSA), an advocacy planning group. CSA recently published a report along with four other organisations on an urban planning response to the COVID-19 lockdown. The report can be accessed here.