Shahjahanabad was not conceived as a whole-sale market feeding the needs of eight states. Unless this problem is addressed, the clutter will continue. After many fits and starts, the plan to decongest and pedestrianise Chandni Chowk seems to have finally taken-off. Hopefully the present mess of thousands of people milling about, with cars, auto-rickshaws, battery-operated-rickshaws, pedal rickshaws, push-carts, bullock-carts, head-load-workers, shoppers and pedestrians fighting for every inch of space will soon be a thing of the past.

We are told that this exasperating disorder, the endless shouting and cursing by people stuck in traffic and the frustration that accompanies each step on the pavement, encroached upon by religious establishments and hawkers in equal measure, will be replaced by broad avenues for pedestrians on either side of the road.

Also Read: Delhi – A City for Cars, Not Pedestrians

We have also been promised that all the utilities will be taken underground. Can you imagine that the day is not far when the chronically entangled wires of all kinds, precariously and dangerously hanging overhead and serving as the expressway for the ceaseless movement of the simian armies will go underground?

One of the greatest changes this will hopefully introduce to Shahjahanabad will be breaking the proximity in which the sewage pipes and drinking water pipes have co-existed from the day both these systems came into existence in the late 19th century. The pedestrians will be able to walk without getting entangled in overhead wires or without stepping into murky waters. 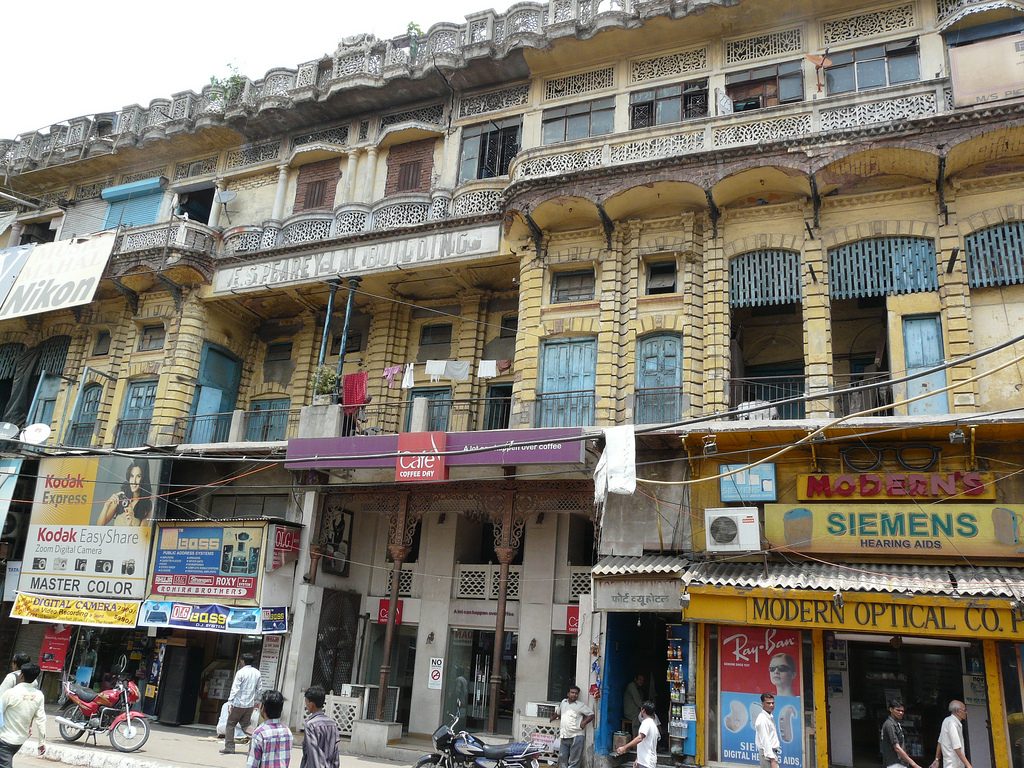 The horrible transformers, some almost as large as the LIG houses that the DDA sells for upwards of Rs 15 lakh or more, presently located on the pavements, will be relocated on the central verge. The aesthetic merits of this great engineering miracle have however not been adequately explained in this great effort at beautifying this 17th century market.

It is planned that only pedal and battery operated rickshaws will ply on either side of the central verge. No motorised transport will be permitted during the day and all loading and unloading will happen at night.

While the gigantic machines begin to tear up the earth on either side of the median, a shrill campaign is building up. The authorities claim that everything is being done with good intentions, after “taking on board all stake holders” and in accord with the directions of the honourable courts.

The opposition is expressing strong disapproval of the plans, primarily because someone else is implementing a scheme that they could not. The plan being implemented now, after much ado, has its genesis in several schemes initiated years ago by the Municipal Corporation of Delhi and the Government of Delhi when these august offices were headed respectively by the BJP and the Congress.

What is, however, missing from this rather high-pitched campaign for and against the project, with the belligerents training their guns and marshalling their media resources against each other, is the one most crucial element that has conveniently been brushed under the carpet.

A piece of historical narration

The stream that brought water to Shahjahanabad entered the city from near the Kabuli Darwaza of Shahjahanabad, outside the city wall were orchards owned by a family of Kashmiri Pandits who bore the name Kauls. The canal passed through the orchards of the Kauls and they came to be known as Nehrus, from Neher (canal).

Motilal, the son of Bansi Dhar Kaul, was the first to use the suffix ‘Nehru’. The Nehru’s had deep roots in the city. Jawaharlal’s wife Kamla came from a family of Kasmiri Pundits who lived near the junction of Bazar Sitaram and Sadak Prem Narayan, both named after two Kasjmiri Pundit brothers.

Jawaharlal’s barat passed through Bazar Sitaram and stayed overnight at the haveli of the Haksar’s at the junction of the roads named after the two brothers. The Haksar’s were also a family of Kashmiri Pandits who had lived in Delhi for generations.

The story was narrated to me by Pandit Anand Mohan ‘Gulzar’ Zutshi Dehlavi, poet, freedom fighter and a friend of my father’s from their days in Hindu College. Gulzar Saheb is a repository of the history of Shahjahanabad and comes from another well-known family of Shahjahaabad’s Kashmiri Pundits.

This long narration is given to foreground the abiding links that the Nehrus have had with Shahjahanabad and also to underscore the fact that the idea of preserving the historical character of Delhi was first articulated by Nehru because he was rooted in it.

Nehru’s dream was to break down the barriers between New Delhi and old Delhi to have a road that would directly connect Jama Masjid to Connaught Place. The other part of his plan was to move out the whole-sale trade of grains, pulses, spices, hard-ware, paper, garments, engineering goods, sanitary-ware and other produce and to leave only retail businesses that would cater to the residents of the city of Shahjahanabad. This would ensure that the city did not turn into an endless market, to continue to be a place that was habitable and where the traditional culture of the city could survive and flourish. 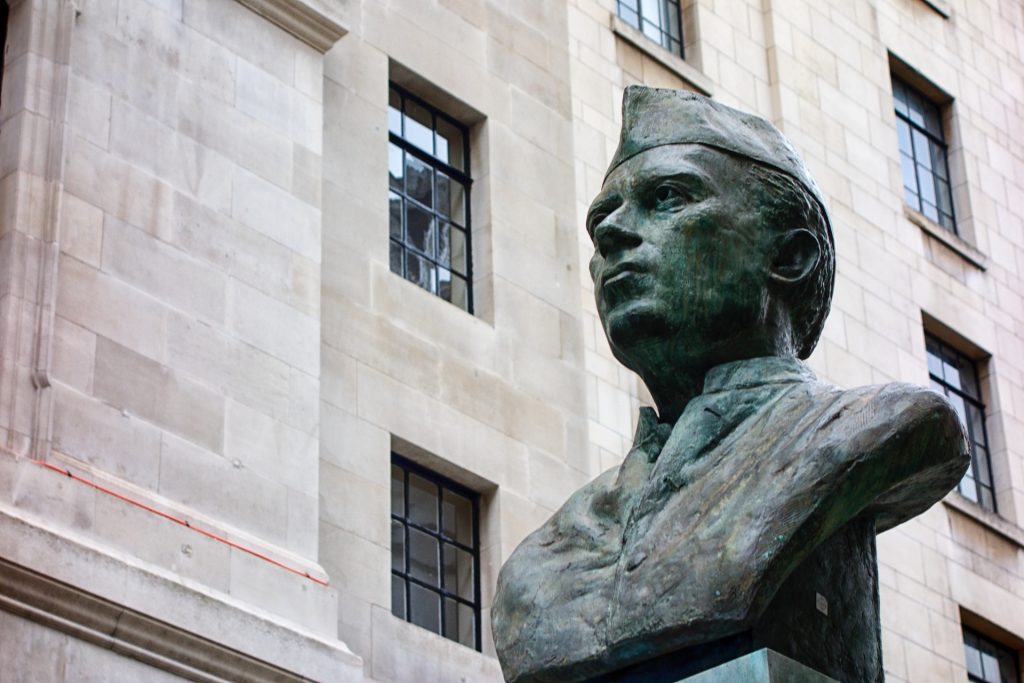 It was to this end that efforts were initiated to shift whole sale trades to Lawrence Road, Pankha Road, Loha Mandi. But all these efforts have failed. The traders lobby has been able to thwart all these plans for decades and it is this stranglehold that is slowly but surely destroying a city that could equal any heritage city in the world.

One must remember that when this city was built in 1740, Shahjahanabad was the capital of the richest kingdom in the world. India accounted for as much as 35% of the GDP of the entire world in the 1750s.

What remains in the form of the old havelis, mosques, temples, bazars, kuchas, mohallas, chowks and streets, can once again rival the finest heritage cities in the world. All that is needed is to remove the ungainly hoardings, take the mess of dangling wires underground, remove the horrible metal shutters and replace them with the wooden gates that existed till a 100 years ago and to shift out the whole-sale trade.

Shahjahanabad was conceived, with all its markets and residential localities organised around crafts as a city of about 300,000 and not as a whole-sale market feeding the needs of eight states.

Unless we take steps that would eventually bring back the Dilliwallahs to Dilli, take the wholesale trade out of Delhi and make it impossible for land-sharks to buy adjacent properties and to ‘develop’ them into metal and glass malls, no amount of pedestrianising Chandni Chowk is going to help restore the glory of Shahjahanabad.

Unfortunately that does not seem to be part of anybody’s scheme, that includes the Aam Admi Party, the Congress and the BJP.