Bapudham alone accounts for 76% of Chandigarh’s COVID-19 cases. The city's administration remains tight-lipped about the lapses that led to it becoming a hotspot.

Chandigarh: Visualised as a temple of modernity by our first prime minister, Jawaharlal Nehru, independent India’s first planned city Chandigarh is currently reeling from an outbreak of coronavirus infections in a slum rehabilitation colony.

A full 222 out of 293 (76%) of Chandigarh’s COVID-19 cases have surfaced in the congested Bapudham alone. The colony is located in Sector 26 in east Chandigarh, close to two of the city’s iconic attractions – Sukhna Lake and Rock Garden.

Bapudham has emerged as the biggest hotspot not only in the Union territory of Chandigarh but also in the region, including the three neighbouring states of Punjab, Haryana and Himachal Pradesh.

Murmurs among the city’s elite blame the people of Bapudham for discrediting their posh city. The outbreak has catapulted this small but densely populated Union territory’s all-India ranking to fourth place after Delhi, Maharashtra and Tamil Nadu, in terms of confirmed COVID-19 cases per lakh population.

Yet, there is silence around the lapses that led to Bapudham becoming a COVID-19 hotspot, with the Chandigarh administration maintaining a strategic silence and the media failing to publicise the situation. This reflects the deep prejudice against migrant workers and the poor that runs underneath Chandigarh’s modern facade.

Unwelcoming to the poor

The idea of building Chandigarh was born in 1948, when Nehru decided to create a new capital for Punjab to compensate for the loss of Lahore to Pakistan after Partition.

Nehru felt the new city would be a “soothing balm on the wounded spirit of Punjab” and a “symbol of new hope”. French-Swiss architect Le Corbusier designed the city, dividing it roughly into 60 neat, square-shaped sectors. His marvel, the Capitol Complex in north-eastern Chandigarh – the seat of the Punjab and Haryana legislative assemblies and secretariats, and the high court they share – was designated a UNESCO World Heritage Site in 2016.

But the architectural beauty failed to soften the hearts of the city’s creators. The villagers ousted to make way for the construction of this ‘model’ city, are still fighting for compensation, 72 years on.

“City makers can’t be blamed but the planners and urban policymakers neglected to build structured and affordable housing for the unorganised workers who came here to build the city,” said Deepika Gandhi, director of the Le Corbusier Centre in Sector 19.

Chandigarh was planned as a slum-free city. It was perceived at the time that labourers and their families would return to their villages once the city was built, but this did not happen, said Gandhi. They stayed on, later joined by others, and formed slums on the city’s peripheries that were supposed to be green covers.

Gandhi added that over the years, slum-dwellers were rehabilitated under several government housing plans, of which Bapudham is one. But slums never entirely disappeared. Further, affordable housing for those living on the margins was never planned for, not even at the pan-tri-city level (the Chandigarh Capital Region comprises Mohali in Punjab and Panchkula in Haryana), where land could have been made more easily available than in land-locked Chandigarh.

To visitors, Chandigarh appears a posh city, boasting of the fourth-highest per capita income in the country in 2017-18 and 2018-19. It also happens to have the second-highest population density among states and Union territories after Delhi, as per Census 2011.

More than one-third of the city’s population – 10.55 lakh as per Census 2011 – currently lives in 20-odd slum rehabilitated colonies like Bapudham. This does not include the many unauthorised slums and villages where government spending is low and the standard of civic infrastructure poor.

While the UT administration is scrambling to contain the coronavirus threat after positive cases surfaced from other slum colonies like Ramdarbar, Dhanas, Maloya and Hallomajra, the situation in these places is not as volatile as in Bapudham. 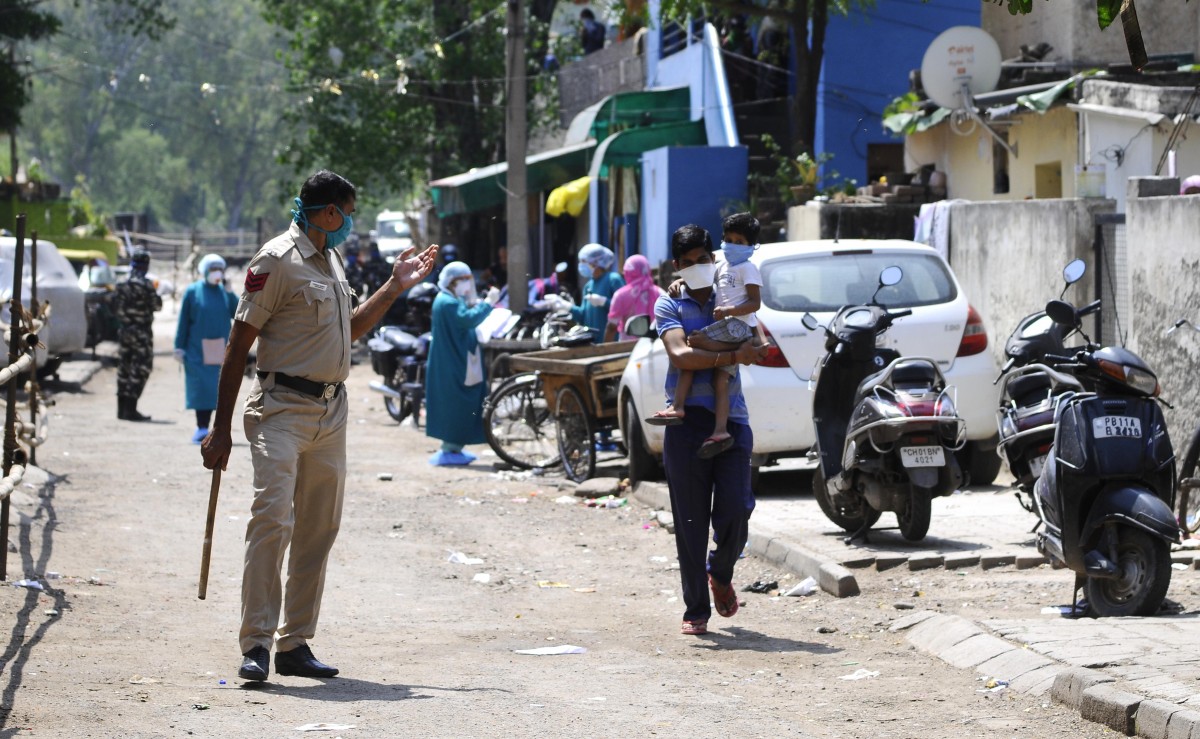 Social disparity out in the open

The elite sections of Chandigarh have always detested have-nots and the slums have, for long, been no more than vote banks for politicians, but the coronavirus pandemic has now brought the worst of the city out in the open.

Named after Mahatma Gandhi, Bapudham was developed in the 1970s to rehabilitate 900 slum dwellers, who were each allotted a one bedroom-set house in a 25 square yard plot. Eventually, the colony would see three phases of growth, housing over 50,000 people who today live in 3,000-odd multi-storey houses.

Bapudham’s first COVID-19 case was recorded on April 24, when a contractual health worker from Government Medical College and Hospital (GMCH) in Sector 32 fell ill. Over a month later, Bapudham has become the city’s major COVID-19 hotspot, much like the congested Dharavi in Mumbai, where a majority of families are cramped in a single room dwelling. One house in Bapudham alone had 18 positive cases.

Dr Rajesh Gill, a sociologist at Panjab University, said that the prevailing narrative in Chandigarh is that those living in Bapudham brought the virus to the city. But the reality, she says, is the opposite. A woman who returned from the UK and lives in one of the city’s poshest sectors, was Chandigarh’s first coronavirus patient. This was conveniently forgotten after Bapudham became a hotspot.

“No one is thinking about the loss of livelihood of the poor and social stigma they face from the same elite who are primarily responsible for importing the disease via air travel,” she said. 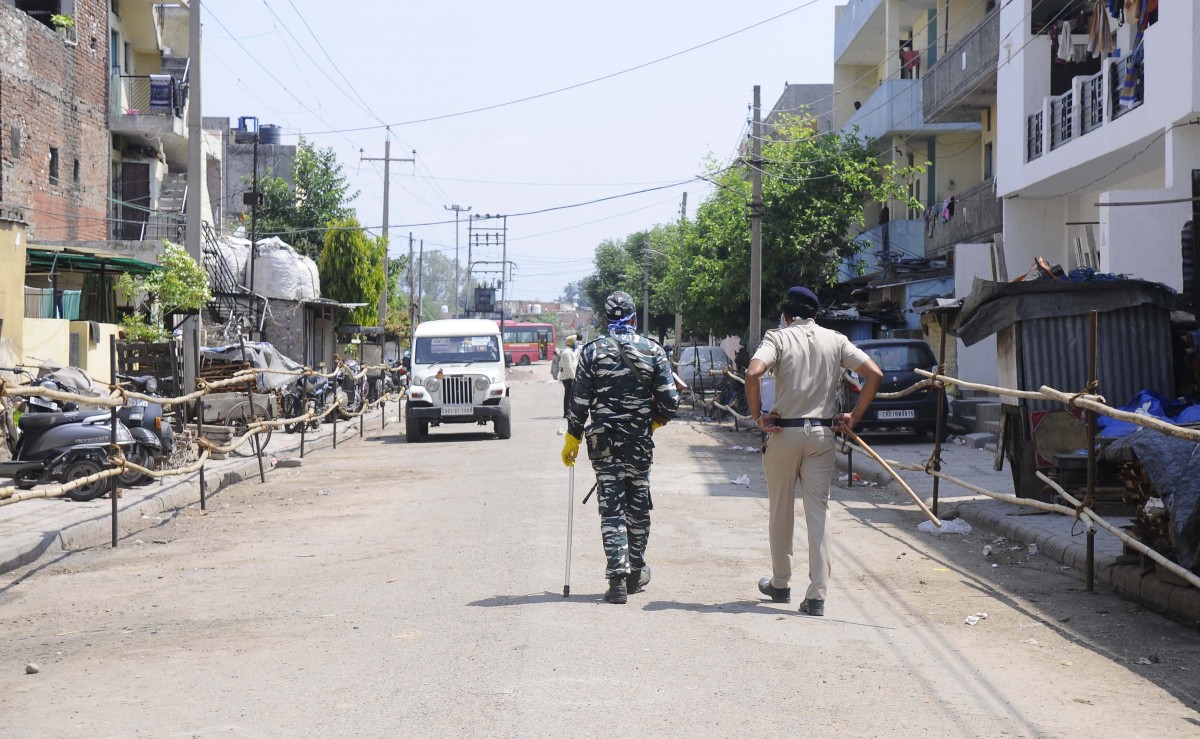 Bapudham resident Zeeshan Ahmed told The Wire about the hardship he faced trying to get medical treatment for his wife after she had a miscarriage earlier in May. “My wife was not treated for hours at GMCH despite her critical condition, just because we were from Bapudham,” he alleges. “I wonder whether people from mainstream sectors face similar humiliation, despite positive cases in their area,” said Ahmed.

Bapudham’s first positive patient, the GMCH health worker, too wages a lone battle. On April 25, a day after he tested positive, police filed a first information report against him under Section 269 of the Indian Penal Code (negligent act) and Section 270 (malignant act likely to spread infection of disease dangerous to life). This was after his employer, GMCH director Dr BS Chavan, revealed to the media that the patient had allegedly hosted a wedding anniversary party for 123 persons at his residence on April 17.

As cases spiked in Bapudham, the patient was quickly labelled the city’s ‘super spreader’. He became infamous across Chandigarh because of the alleged party.

“But it is all a farce,” he claims and added, “I just cut a home-baked cake in presence of my family members. I live in a joint family of 20-25 members and so it was projected as if I held a party.” He claimed he had been on duty that day and returned home at 5 pm and so could not have planned a party. He was discharged in late May and remains under mandatory 14-day home quarantine.

Chandigarh police spokesperson deputy superintendent of Police Charanjit Singh Virk said that the investigation so far did not find any evidence of a party in Bapudham, but the probe is still underway.

While 70% of Bapudham patients have recovered, concerns remain

Even as approximately 70% of patients in Bapudham have been discharged, lapses have emerged in the way the outbreak was handled. The decision-makers seemed to not have realised that, unlike in the wealthier sectors, social distancing was not possible in the small houses in Bapudham. When the first case was detected, aggressive testing was not carried out in the affected pockets and high-risk pockets were neither decongested or quarantined.

Area councillor Dalip Sharma said that there were many shortcomings in handling the COVID-19 situation in Bapudham. In some instances, all family members of positive patients were not tested, but later were found to be positive. “But I believe the situation is improving,” Sharma told The Wire.

Local experts believe random sampling in non-affected pockets should also be done to ascertain the exact scale of the outbreak, given that there is a continuous demand from colony residents to ease movement restrictions in pockets having no positive case. 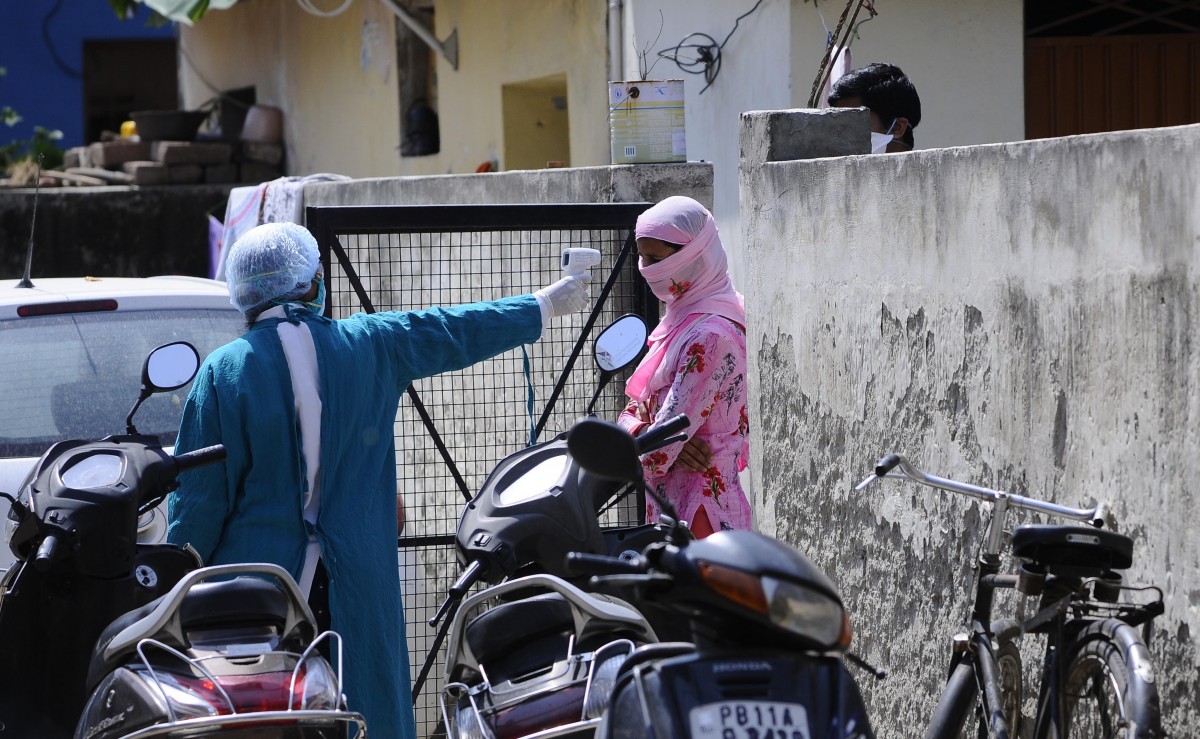 An epidemiological assessment report by premier medical institute, Post Graduate Institute of Medical Education and Research (PGIMER) in Sector 12 dated May 13, had raised concerns about rising cases in Bapudham. As per the report, the entire colony is divided into 30 pockets but only a few pockets were declared containment zones, and the remaining area was treated as a buffer zone. It stated that the containment zones inside the colony were not extended even after many cases appeared outside earlier contained pockets. It called for bringing the entire colony under a containment zone.

Institutional quarantine of contacts of positive cases was intensified only after PGIMER recommended that the Union territory administration follow the Dharavi model.

The PGIMER report also calls for active surveillance in the entire Bapudham area, identification of super spreaders and setting up dedicated infectious disease hospitals on the city’s periphery to keep treatment of infectious persons separate from routine health services, among other recommendations. But it’s uncertain whether the UT administration will implement the recommendations.

Surprisingly, the UT’s health secretary A.K. Gupta said that he has not officially received the PGIMER report, of which all local media persons have a copy. On being asked about implementing the PGIMER recommendations, UT advisor Manoj Parida was quoted as saying “We only follow guidelines of the Central Government. We do not rely on unofficial reports.”

But it was UT administrator and Punjab governor VP Singh Badnore, a central government appointee, who had commissioned the PGIMER study.

Dr Rajesh Dhir, president of the Chandigarh chapter of the Indian Medical Association, said that it is easy to blame local authorities. “They are putting all their resources to contain the virus but people too have an important role to play in it by following all precautions. My question is how these colonies came about in the first place,” he said.

Chandigarh’s satellite cities Mohali and Panchkula have done comparatively better. Panchkula district has not more than 26 COVID-19 cases as of May 31, of which only one case remains active. SAS Nagar district (Mohali) on the other hand has 111 cases, out of which only nine positive cases are currently under treatment. Jawaharpur village in Dera Bassi tehsil had become a COVID-19 hotspot with 46 positive cases, but all patients recovered and there have been no fresh cases for the past month. Bapudham is the only place where the COVID-19 situation threatens to spin out of control.