"If the term of some state assemblies needs to be curtailed or extended, then a constitutional amendment will be required," chief election commissioner O.P. Rawat said. 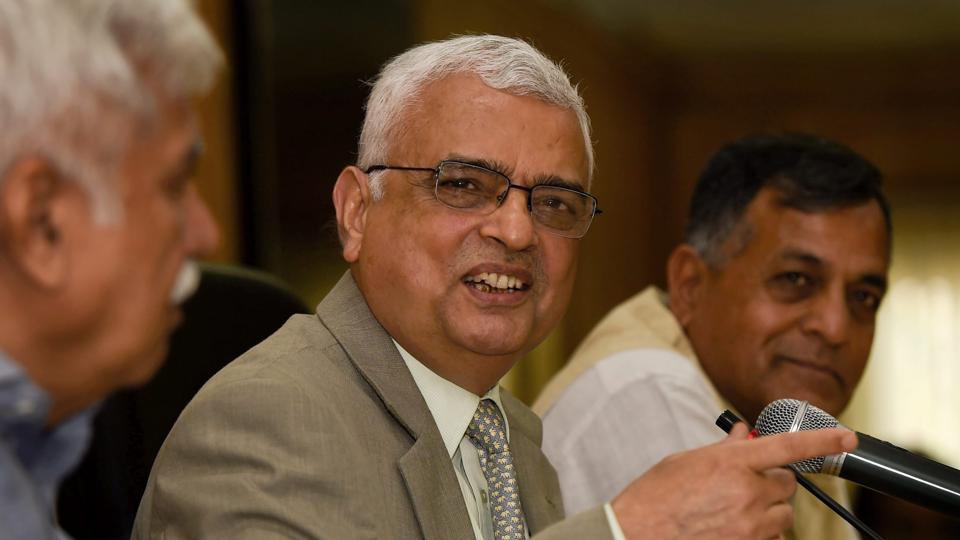 New Delhi: Simultaneous elections are not possible without a legal framework, as any extension or curtailment of the terms of assemblies will require a constitutional amendment, chief election commissioner O.P. Rawat said today. His comments came a day after the Bharatiya Janata Party made a fresh push to hold Lok Sabha and assembly polls together.

Pointing at the need for a legal framework, he ruled out holding simultaneous polls any time soon. “If the term of some state assemblies needs to be curtailed or extended, then a constitutional amendment will be required… Logistics arrangements with regard to 100 per cent availability of VVPATs (paper trail machines) will be a constraint,” he told reporters to a question on whether simultaneous elections can be held soon.

“On the issue of ‘one nation one poll’, the Election Commission had given inputs and suggestions in 2015 itself… Other requirements of additional police force, polling personnel would also be needed,” he said.

The CEC said the poll panel will continue to fulfil its responsibility of conducting elections whenever terms of the state assemblies come to an end.

The EC is in the process of procuring new EVMs and VVPATs ahead of the 2019 Lok Sabha polls. While all required EVMs – 13.95 lakh ballot units and 9.3 lakh control units – will be delivered by September 30, 16.15 lakh VVPATs will also be delivered well before the end of November, Rawat had earlier said.

Some additional VVPATs are being procured as a cushion in case these machines malfunction and need to be replaced during polls.

Over 11% of the 10,300 VVPAT machines across ten states had developed faults and had to be replaced during the May 28 by-polls.

If simultaneous elections to the Lok Sabha and state assemblies are held in 2019, the EC will require nearly 24 lakh EVMs, double the number required to hold only the parliamentary polls.

During their discussion with the Law Commission on May 16 on the issue of holding simultaneous polls, the EC officials had said they would need around Rs 4,500 crore to buy nearly 12 lakh additional EVMs and an equal number of VVPAT machines. The estimate was based on the current cost to procure the devices.

BJP president Amit Shah had written to the Law Commission yesterday supporting holding Lok Sabha and assembly polls simultaneously. He had said that any opposition to the idea is “politically motivated”.

A paper by the Law Commission had recently recommended holding Lok Sabha and assembly polls in two phases beginning 2019.

Political parties are divided on the issue of simultaneous polls. Besides NDA constituent Shiromani Akali Dal, the AIADMK, the Samajwadi Party and the Telangana Rashtra Samiti too have supported the idea. While the Congress, Trinamool Congress, Aam Aadmi Party, DMK, Telugu Desam Party, Left parties and the JD(S) have opposed it.

Several political analysts and experts however maintain that simultaneous polls will have a negative impact on India’s federal structure and reduce states’ autonomy.

Writing in The Wire, political scientist Sudha Pai argued that holding general and assembly elections at the same time might not work – both because of the logistics and because of what it may entail for India’s federal structure:

Consequently, today the states have come to occupy a crucial position in our federal system. The rise of strong regional forces and new social identities have ensured that there is a common arena of state politics that is conscious of its own autonomy, that is somewhat divergent from national politics. It is for this reason that every state assembly election seems like a national election, throwing up new challenges to national parties. The contest almost everywhere is between a national party and regional parties, while parties based in regions are also competing for power at the Centre.

Thus, apart from not being particularly feasible, the simultaneous holding of parliamentary and state assembly elections is not suitable in our increasingly regionalised, federal democracy. As competition is the essence of democracy, it would not be desirable to have an “opposition mukt Bharat”.

Former Lok Sabha general secretary P.D.T. Achary also wrote in The Wire explaining why simultaneous elections may not be healthy for India’s democracy:

Elections are the means by which the people renew their faith in democracy. Since 1952, we have a 65-year history of democratic elections. These elections, though imperfect in many respects, have served one noble purpose – they have ensured accountability to the people. The people have rejected those who did not care for them. Accountability is the essence of democracy. The fear of being thrown out by the people compel politicians to address problems. Frequent elections have kept the government on its toes. In our experience, once elected, representatives slowly move away from the people. If there are no more elections for five years, the people will surely be forgotten for that duration. Frequent elections will keep the bond between the people and their representatives strong. Otherwise democracy will slowly dry up.

Bihar Chief Minister Nitish Kumar today said that ‘one nation, one poll’ was a good idea but not implementable in the forthcoming general elections. Kumar, who has been advocating simultaneous polls for state assemblies and Lok Sabha for quite some time, was responding to a query from journalists in Patna.

Holding simultaneous polls for all state assemblies and the Lok Sabha would not be possible in the next general elections. It is a good idea but the time is not yet ripe for its implementation, he said.