What Explains the High Number of Railway Accidents? 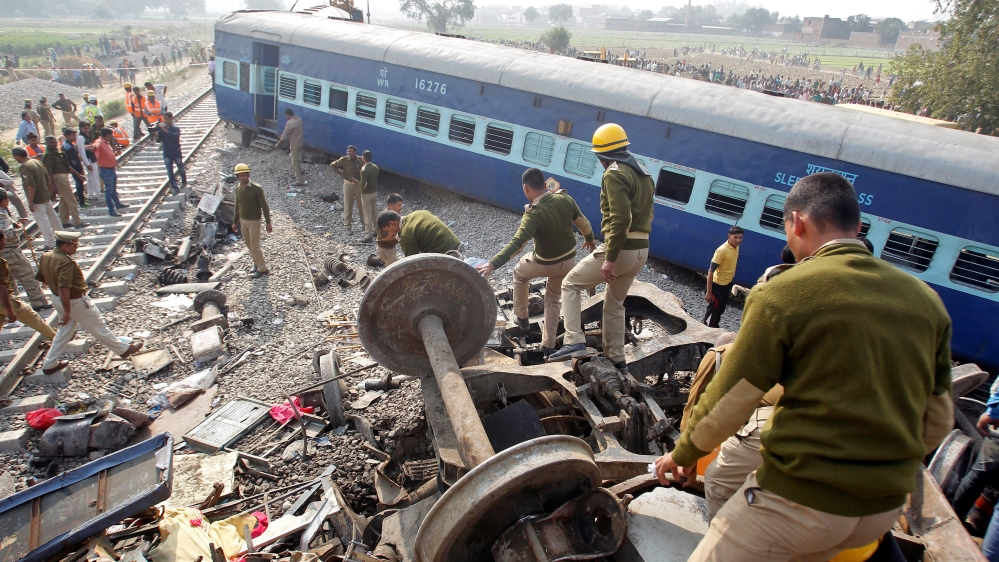 A train derailed in Pukhrayan, near Kanpur, in November 2016. Credit: Reuters/Jitendra Prakash

Safety has been one of the biggest concerns in the Indian Railways system. While the number of accidents have gone down over the last few years, the number still remains above 100. In light of recent train accidents, including the Duronto Express derailment on Tuesday (August 29) morning, it makes sense to look at the details around railway safety. 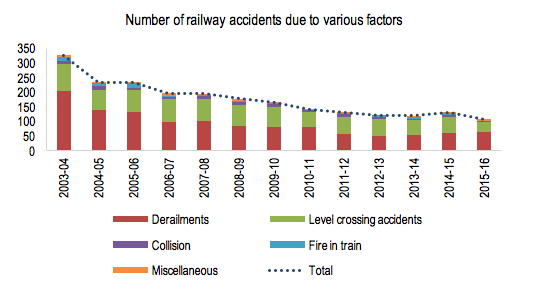 Between 2003-04 and 2015-16, derailments were the second highest reason for casualties. The Standing Committee on Railways had noted that one of the reasons for derailments is defect in the track or rolling stock. Of the total track length of 1,14,907 km in the country, 4,500 km should be renewed annually. However, in 2015-16, of the 5,000 km of track length due for renewal currently, only 2,700 km of track length was targeted to be renewed. The Standing Committee had recommended that Indian Railways should switch completely to the Linke Hoffman Busch (LHB) coaches as they do not pile upon each other during derailments and hence cause lesser casualties.2

Unmanned level crossings (UMLCs) continue to be the biggest cause of maximum casualties in rail accidents. Currently there are 14,440 UMLCs in the railway network. In 2014-15, about 40% of the accidents occurred at UMLCs, and in 2015-16, about 28%. Between 2010 and 2013, the ministry fell short of meeting the targets to eliminate UMLCs. Further, the target of eliminating UMLCs was reduced by about 50% in 2014-15. The Standing Committee on Railways had recommended that audio-visual warnings should be implemented at level crossings to warn road users about approaching trains. These may include the Approaching Train Warning Systems and the Train Actuated Warning Systems. In the Union Budget 2017-18, elimination of all unmanned level crossings on broad gauge lines by 2020 has been proposed.

In the last few years, the number of casualties has varied. Further, on average, Indian Railways has paid Rs 303 lakh every year towards compensation for such accidents (see figure below). 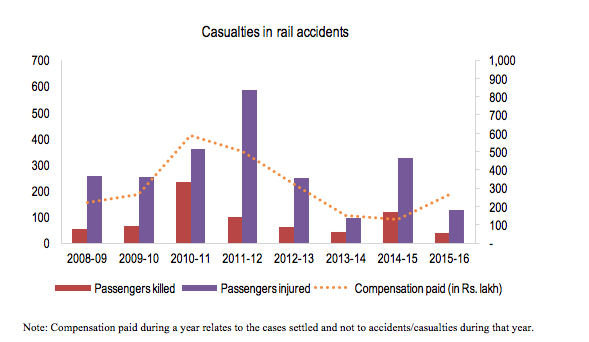 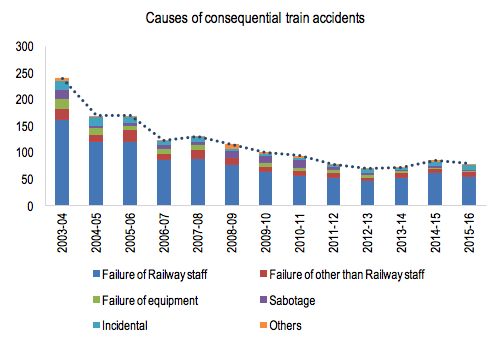 As seen in the figure above, the share of failure of railways staff is the biggest cause of consequential rail accidents. The number of rail accidents due to failure of reasons other than the railway staff (sabotage) has increased in the last few years.

Accidents due to failure of railway staff

The Standing Committee on Railways, when examining safety and security in the railways, had noted that more than half of the accidents are due to lapses on the part of railway staff. Such lapses include carelessness in working, poor maintenance work, adoption of short-cuts and non-observance of laid down safety rules and procedures. The committee had recommended that a regular refresher course for each category of railway staff should be conducted.

Accidents also occur due to signalling errors for which loco-pilots (train operators) are responsible. With rail traffic increasing, loco-pilots encounter a signal at every kilometre and have to constantly be on high alert. Further, currently no technological support is available to the loco-pilots and they have to keep a vigilant watch on the signal and control the train accordingly. Loco-pilots are also overworked as they have to work beyond their stipulated hours of duty. This work stress and fatigue puts the life of thousands of commuters at risk and affects the safety of train operations. The Standing Committee on Railways had recommended that loco-pilots and other related running staff be provided with sound working conditions, better medical facilities and other amenities to improve their performance.  With regard to signals, the committee recommended that the location of signals can be uniformly displayed and be linked with visibility, braking distance and speed.

Under-investment in the railways leading to accidents

Various committees such as the High Level Safety Review Committee in 2012 (chaired by Anil Kakodkar) and the Standing Committee on Railways have looked at the aspect of safety in the Indian Railways and made certain recommendations. According to the Kakodkar Committee, the total financial implication of the safety measures over the five-year period (2012-17) was likely be around Rs 1 lakh crore.

In the Union Budget 2017-18, the creation of a Rashtriya Rail Sanraksha Kosh was proposed for passenger safety. It will have a corpus of Rs 1 lakh crore over a period of five years (Rs 20,000 crore per year).

While accidents have been decreasing, the number still remains fairly high. The Standing Committee on Railways noted that the slow expansion of rail networks has put undue burden on the existing infrastructure, leading to severe congestion and safety compromises. Since independence, while the railways’ route kilometres have increased by 23%, passenger and freight traffic over the railways network has increased by 1,344% and 1,642% respectively. This suggests that the railway lines are severely congested. Further, under-investment in the railways has resulted in congested routes, inability to add new trains, reduction of train speeds and more rail accidents. Therefore, avoiding such accidents in the future would also require significant investments towards capital and maintenance of railways infrastructure.

Prachee Mishra is a senior analyst at PRS Legislative Research.

This article was originally published on the PRS blog and is republished here with permission.