'A mature cartooning tradition implies a discerning readership which is sure to summarily reject cartoons such as the one by Bill Leak'. 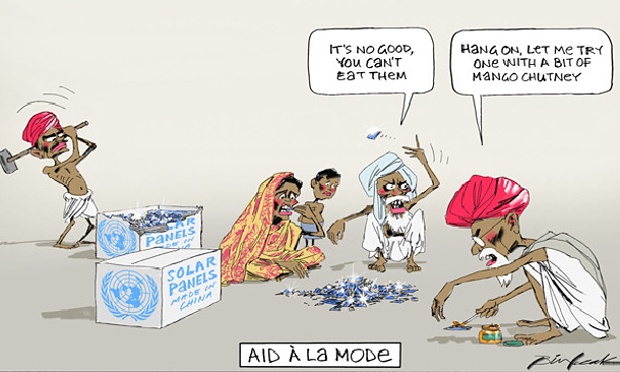 Cartoon by Bill Leak in the Australian

This morning, a colleague received an email from a foreign journalist asking whether he had seen “this ridiculous cartoon from The Australian?” adding that it was bound to spark some irritation in India post-COP21. Cartoon by Bill Leak in the Australian

In Bill Leak’s cartoon in the Rupert Murdoch-owned paper, a scrawny dhoti-clad man with a pink turban and mouth drawn into a grimace is shown wielding a big hammer to smash a pair of solar panels packed in cartons emblazoned with the UN logo and a made in China sign on one side. While the patriarch of the family says in disgust that the broken fragments of the solar panel are no good to eat, another adult with an experimental bent of mind wants to try the bits with mango chutney.

As expected, the cartoon irritated and incensed many. The words racist and offensive careened across social media networks through the day like frequent flyers on a massive carbon print overdrive. On Twitter, there were hundreds of responses, including from Australians, attacking his latest act of creativity. The question is, is there a way of drawing – and looking at – cartoons that is not always contingent upon reading meanings from the vantage point of national dignity or pride?

A brief look at cartoons made during and after the COP21 agreement show that Leak is part of a much larger international spectrum. If there is a Heng Kim Song cartoon in the New York Times (December 6) showing the driver of the Paris Climate summit train staring irately at an obdurate Indian elephant blocking the track, there is also the Patrick Chappatte cartoon in the International New York Times where an obese American tells an implacable Chinese man – both with polluted cityscapes behind them – that to save the planet, he must give up the American way of life.

Similarly, if Bill Leak occupies one end of the spectrum, The Indian Express cartoonist Unny’s Santa holds out a message of hope for the entire world in the form of a sapling, its leaf in the shape of the Paris summit’s logo. )

The Wire spoke to four well-known Indian cartoonists drawn from the major national newspapers of India to see Leak’s cartoon through their eyes:

Ajit Ninan, The Times of India I don’t see the Leak cartoon as racist. If one has to be critical, I would say it is contrived: I mean, solar panels don’t come packed in UN cartons. Such cartons are always meant for food packages. One of the strong visual memories of my growing up years is images of food cartons stamped with huge UN logos that were distributed to the poor; the logos would be identifiable to a populace that suffered from a high rate of illiteracy. So maybe he was making fun of India’s considerable illiteracy. I just think that the cartoonist wanted to score a goal by trying out something that was novel to his mind. To intellectualise it too much would be a mistake.

Come to think of it, our own Indian cartoonists have shown the poor in far worse light – I and other cartoonists have portrayed poor people – half clad, their bones sticking out – with begging bowls before a neta. This was just to show the contrast between the electorate and the elected. To do this one has to touch the extremes. At least Leak was decent enough to wrap the Indians in his cartoon in clothes.

That said, there is nothing cerebral about the cartoon. If he wants to kick up a controversy, that is quite another thing. There are enough such people here as well. Remember Aseem Trivedi who drew the Parliament like a commode?

There is an unwritten convention that one should not draw the country’s president or the Chief Justice in any way that lowers the dignity of those institutions. My father’s brother, the famous cartoonist Abu Abraham, at the height of Emergency drew the president in a bath tub signing a spate of ordinances and returning them to the hand that extended into his bathroom with the comment, ‘If there are any more ordinances, just ask them to wait’. Abu was an MP at that time and knew the President and the prime minister well. At the height of press censorship he got away with it – the cartoon was tastefully done even though it was revolutionary; such a thing had not been attempted before.

During my time at India Today I myself drew the ire of a certain Mrs Lobo to a cartoon of mine. I drew Rajiv Gandhi as the Pope who was surrounded by black sheep, with one white sheep – V.P Singh – jumping over the fence! Instead of the cross on the papal robe, was the Congress I symbol of the hand. Mrs Lobo took me to court on the ground that her religious sensibilities had been offended and I had to apologise.

To round up this debate, people who deal with cartoons should never bank on cartons….. As the year is coming to an end one sees a greater sensitivity to issues such as the refugee crisis and migration; for instance, German Chancellor Angela Merkel is Time magazine’s person of the year. In the middle of all this, that too from  Australia which has a vibrant cartooning culture, when you get a pointless cartoon like Bill Leak’s in The Australian, what do you say? A cartoon does not emerge in isolation. If the newsroom sees it fit to print such a cartoon, it is they who have some explaining to do.

This cartoon is in no way representative of Australia’s cartooning – that speaks of masterly, all-time greats like Bruce Petty (who won an Oscar for a cartoon animation in the 1960s) and Michael Leunig (cartoonist, poet and cultural commentator), and many others. What comes through in their cartoons is a worldview that is very progressive, nuanced and — there is no other word for it — soothing. Not just that, Bruce Petty told a scholar of Indian cartoons, Sundar Ramanathaiyar, that he wanted to be described as Australia’s O.V Vijayan.  This statement indicates the total absence of any hierarchical bias towards India; in fact it inverts a common prejudice that we Indians have of marking our work in terms of foreign artists. Australian cartoonists are very open and have a progressive view of Indian society, or our multiple societies. Interestingly, both India and Australia share a Commonwealth tradition of cartooning — we have learnt from the British tradition of cartooning.

My point is that a mature cartooning tradition implies a discerning readership which is sure to summarily reject cartoons such as the one by Bill Leak.

My cartoonish reaction to the cartoon is whether they want us to be more coal and uranium dependent rather than opting for cleaner energy!

Cartoons are meant to offend but I don’t find this cartoon offensive. I don’t see racist tones in it either; it is just a continuation of the old colonial mindset. I would say that a cartoonist like Patrick Chappatte is truly an internationalist, but a large number of Western cartoonists have a totally neocolonial worldview. I remember an American cartoon in which one American is asking another, Is it ‘shit’ or Shiite? There are enough tasteless cartoons appearing in India as well.

Cartoons are meant to poke fun, push limits. At the most one can say Leak’s cartoon is uninformed. He is depicting India in a certain way; India is not like that anymore. Interestingly, some years ago, it was the Australians who accused me of drawing racist cartoons! I was merely reacting to the statement made by the police following the murder of an Indian student, Nitin Garg, in Melbourne, that it was not a hate crime. This was even before they had started their investigation. So I drew a string of cartoons depicting the police in a Ku Klux Klan type of guise.

There was a similar burst of outrage in Australia. They said that while I was portraying the Australian police as racist, I was the actual racist; that Australia was not the way I was portraying it, it was multicultural.

In fact cartoonists have been offending all kinds of people all the time. Since politics has become shriller, cartoons are bound to reflect this trend. This change is evident in Indian cartooning too — while the cartoons of our seniors were much gentler and quieter, we find that we are required to shout to make ourselves heard. When I saw the cartoon, the only thing I could think of was the work of Patrick Chappatte who occupies the opposite end of the spectrum.  He is international in his outlook and does not look  at the so-called Third World in the way Leak does.

Yes, Chappatte’s worldview has emerged from his experience of having lived in different places across the world, but it is important to understand that cartooning is an art where you have to find the middle ground that will draw in the reader and enable a conversation, or dialogue. There are times when cartoons have to be provocative, but a provocative cartoon goads people to think. But this kind of cartoon, which is declamatory and wanting to make a statement, leaves no space for the reader to get into the cartoon and respond.

I find it ironical that Indian cartoonists are seeing this entire debate around climate change from a different perspective – many of them are daring to think on lines of hope for humanity. E P Unny’s cartoon today in the Indian Express showed a Santa Claus, gift sack slung over his shoulder, holding a sapling in his left hand, the leaf of the sapling being the logo of the Paris climate summit. It conversed with the readers about the decision as a gift to humanity and how it spreads much cheer and hope. But Leak’s cartoon, on the other hand, seeks to exclude the Third World from the debate by implying that it does not have the wherewithal to understand this complex debate.

Apart from anything else, ‘the Third World does not understand’ cliché is an old one and has outlived its time. Cliches do work in cartoons; they are part of the communication the cartoonist employs vis-à-vis the reader, who sees/reads and gets to know the cartoonist through a serial reading. It is a device to help the reader identify with your cartoons over  a period of time. But it is important to realise that a cartoonist needs to update his clichés regularly.  As an art cartooning questions a lot many assumptions. If a cartoonist does not update his ideas he will lose out on many elements that can provide grounds for opening up debate. Besides, in an age when a cartoon can go viral around the world in a mere 10 minutes, a cartoonist cannot afford to take the risk of being outdated.

Seeing this cartoon I am reminded of another cartoon by the Singapore- based cartoonist Heng Kim Song in the New York Times at the time of the successful launch of Mangalyan to Mars. The cartoon shows an Indian farmer with a cow knocking at the door of an elite space club. Many people thought it was tasteless and the NYT editor had to eventually apologise for publishing it but I did see some merit in it. There was an idea that a goal achieved in an economical manner was good enough for a country to seek entrance into the elite club of major space powers. Bill Leak’s loud statement, however, is not doing any such thing.