Demonetisation Is a Reminder of Colonial Monetary Policies

Demonetisation has proved that it's time we revisit what Gandhi and his colleagues had to say about public welfare and the importance of decentralisation. 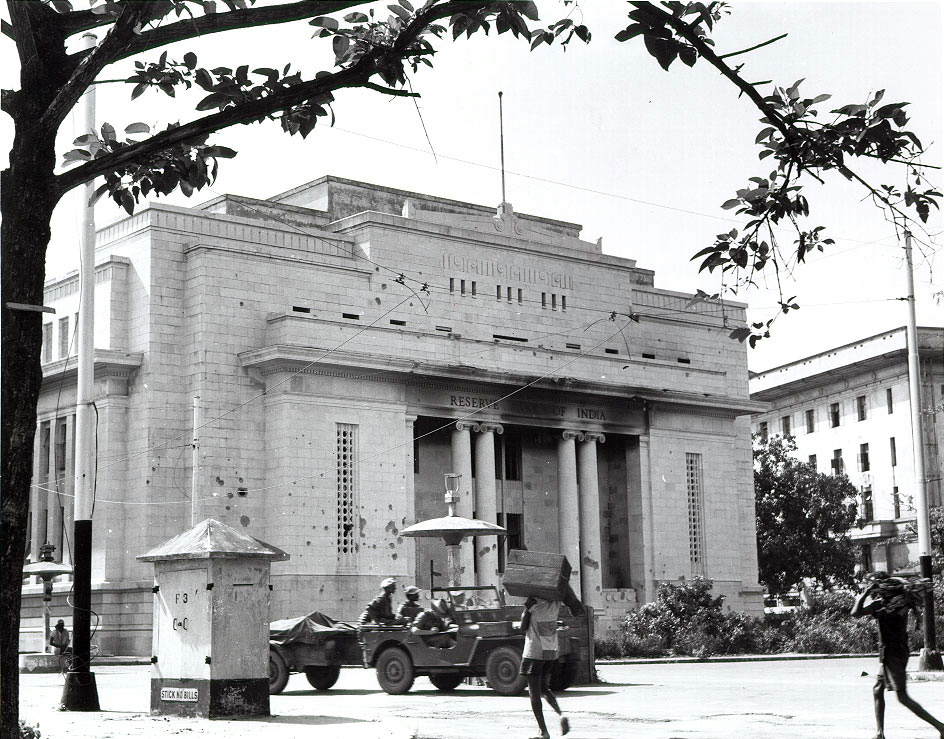 The demonetisation of Rs 500 and Rs 1000 currency notes has dominated Indian lives since its announcement on November 8, 2016. Its shock-and-awe approach has created a sense of frisson amongst Prime Minister Narendra Modi’s acolytes. However, for many who owe no allegiance to specific political dispensations, it has not been possible to accept the stated objectives at face value. The case for robust skepticism towards demonetisation as a means of tackling the scourge of black money has been effectively made by many writers and economists. But more than the views of the critics, it is the government’s constantly shifting goalposts that makes us discount the putative justification for such a drastic policy decision.

In the early weeks, the absence of a clear understanding on the true motive of such a radical monetary measure has led to much speculation that was akin to Kremlin watching during the Cold War era. Some have plausibly seen sudden demonetisation as an attempt to distract people from the Sahara-Birla bribery scandal. Others have convincingly argued that this was an attempt to re-capitalise banks burdened with what are euphemistically called non-performing assets, meaning extract money from the hands of hard-working and honest citizens to paper over the fact that banks are in trouble thanks to the brazen behaviour of the ‘respectable’ captains of Indian industry. Amidst all the chest-thumping of going after the guilty, let us not forget that many top business houses that owe public sector banks obscene amounts of money remain untouched.

The demonetisation exercise has also been given the colour of a moral project in which ordinary citizens participate and endure suffering for a greater public good, a yagna for the eradication of black money from our lives. In his public utterances, Modi has himself repeatedly appealed for cooperation in moral terms. Given the powerful emotional charge of such an argument, it is important to subject it to an examination. The most significant example of a moral dimension to public and political causes is the Indian freedom movement led by Mahatma Gandhi. But, in the light of our historical understanding, demonetisation fails two elementary tests we may apply to distinguish between morality and moralism. In the first instance, Gandhi did not merely demand sacrifices from others but willingly and demonstrably paid the price himself. Second, and more importantly, the principal thrust of Gandhi’s moral demand arose from an appeal to individual conscience. It was never backed by the might of a powerful organisation or the awesome powers of a coercive state. It is in this sense that the rhetoric of demonetisation as a moral project sounds rather contrived. No policy that peremptorily dragoons the entire population for dubious ends can stake a claim to the high ground of a moral exercise. Nevertheless, while we may discount the claims of moral virtue, Modi’s demonetisation has served as an important reminder. If modern states are defined by their monopoly over violence, it is equally so with their monopoly over money. Indeed, with the instantaneous extinguishing of the value of 86% of currency notes in circulation, Modi has put the ‘fiat’ back in fiat money.

Some commentators have drawn comparisons with historical precedents of demonetisation, including one instance during the tenure of Morarji Desai as prime minister. However, it is more fruitful to move away from the technical similarity with demonetisation and look at other instances where the monetary decisions of the rulers are ripe with moral hazard. After all, while most of us are largely insulated from the impact of the current cash drought, the rural poor and the vast multitude who eke out a living in the so-called informal sector have no such luxury.

Two such instances of invidious monetary policy occurred towards the end of British rule in India, during the Great Depression and later during the Second World War. While the trigger for the Great Depression was a financial crisis in the US in 1929, in about a year the effects of economic depression had enveloped the globe. Accompanied by global overproduction of food grains, the depression led to a crash of agricultural prices in India causing grave hardship. Indeed, the enthusiastic participation of Indian peasantry in the civil disobedience movement of this period was no coincidence.

The most important monetary policy measure of the time was the exchange ratio between the Indian rupee and the pound sterling. Britain had held the Indian rupee at an artificially high level which was financially beneficial for it in multiple ways. So effective was the sterling-rupee ratio in the economic exploitation of India that even in the face of India’s dire economic distress, the colonial regime resolutely stuck to it and refused to even countenance a devaluation of the Indian rupee. As painstakingly detailed by the distinguished economic historian Dietmar Rothermund in India in the Great Depression: 1929-1939, the crisis led to distress sale of gold by poor Indians. The result was the export of large volumes of the precious metal out of India that helped rebuild Britain’s gold reserves. Traditionally, bits of gold jewellery were the only modicum of security that a peasant had and the fact that he parted with it was clearly indicative of widespread and serious economic distress. Indeed, in Rothermund’s scholarly and measured assessment, the British opportunism in capturing distress gold for its own uses, thereby prolonging India’s economic depression, was “a case of criminal negligence”.

For the British, maintaining the sterling-rupee ratio was a self-serving article of faith. Amongst the many measures it undertook to protect its economic interests was the creation of an institution much in the news today, the Reserve Bank of India. Although conceived in theory as an independent bank, as the historian Aditya Mukherjee has shown, Britain stubbornly worked to insulate the RBI from the pressures of Indian public opinion and used the bank towards its own ends. These undemocratic measures paid rich dividends during the crisis period of the Second World War. During the war, a pliant RBI faithfully carried out its masters’ orders and printed enormous volumes of Indian currency that was used to buy up Indian goods to serve Britain’s war interests. To cut a long story short, this led to rampant inflation and an acute scarcity of food, cloth and other commodities. The resultant hardship inflicted on India in this period also included the devastating Bengal famine of 1943. In other words, if in 2016 the RBI has haplessly abdicated its responsibilities towards Indian people, it has much institutional precedent that is rooted in its very genesis.

During the 1930s and 40s, many in Indian public life were enamoured of the possibility of using state power towards public welfare. The Gandhians also recognised that the state wielded enormous powers that should be harnessed towards noble ends. But in the ultimate analysis they remained skeptical enough to not believe that all the political and economic goals of society can and should be achieved through the instruments of the state. Therefore, while demanding accountability from the political state, Gandhi and his co-workers consistently pushed for a decentralised political and economic order. This was seen as a measure against the capture of the edifice of the state by the powerful. It was also necessary as a means to ensure the economic autonomy of the poor who had no resources other than their own labour. Indeed, the economic philosopher and constructive worker J.C. Kumarappa had the abuse of concentrated power in mind when he argued that “centralization in industries is inimical to the development of democracy in politics”. He could have as well made the same case against the centralised monopoly over money that is a fundamental characteristic of the modern political state.

In the face of the refusal of the colonial powers to address the grave problems of its subjects, the Gandhians did not limit themselves to criticism. One interesting experiment was the development of a small-scale bartering system by Tanguturi Prakasam and his colleagues in the coastal Andhra region during the 1930s. In their stores, people could exchange hand-spun hank yarn for tokens. In turn, these tokens could be used to purchase khadi cloth, food and other commodities in the same stores. Thereby the attempt was to provide fair value to those who had worked to spin the yarn that was central to Gandhi’s khadi movement. While this arrangement had a limited impact in a small community, in principle it was an attempt to counter the truism that ‘for transfer of purchasing power, money and credit are unsurpassed’. In early 1942, in the face of severe economic distress of the people nnd a brutal and unyielding ruling dispensation, Gandhi himself advocated the development of a yarn currency. As an experiment, Gandhi suggested that the vast network of khadi stores use “a warp length of a single thread of yarn as the lowest measure” of a token of exchange. Gandhi recognised that this was a rather limited move and argued that khadi workers should investigate it further and analyse its possible merits and flaws. Soon India entered the political conflagration of Quit India and the idea of yarn currency was still-born. Gandhi and many others were imprisoned and a ruthless Raj deliberately crushed not only the political Congress but the khadi network as well. Nevertheless, in the face of a serious cloth famine in India at the time and with the rupee utterly debased by rampant inflation, and all-round scarcity, yarn currency was an interesting idea that could have helped bootstrap some people into economic activity.

Throughout his public life, Gandhi remained skeptical of the ability of the modern state to deliver justice in its truest sense. Nor was he enamoured of what would qualify today as ‘free market’ solutions. Here we should recognise that Gandhi and his colleagues were not anarchists opposed to the very idea of a state. Rather, they had a realistic assessment that the capacity of the state to do good could be equally deployed to do harm to its own citizens. Their solution was to build resilience against abuse into the political and economic order by the decentralisation of power. We should also recognise that the Gandhians were not naive about either the desirability or the feasibility of a full-blown barter system in the modern era. Nevertheless, theirs was an attempt to capture the spirit of equity inherent to a barter economy and deploy it to contemporary ends.

In recent years, India and many other nations have been subjected to the dictates of powerful financial interests from abroad and equally nefarious home-grown crony capitalists. Modi’s demonetisation can be seen as just the latest of a slew of measures which are inimical to public welfare. At the same time, most of the political parties that currently form the opposition have hardly distinguished themselves as protectors of people’s interests when in power. But the fundamental issues at stake are too important to be left to the akhada of electoral politics alone. If anything, demonetisation should give us pause to rethink fundamental principles. In this endeavour, Gandhi and his colleagues hold important lessons for those willing to listen and learn.

Venu Madhav Govindu is with the Department of Electrical Engineering, Indian Institute of Science, Bengaluru. He has recently published a biography of the Gandhian economic philosopher and constructive worker, J.C. Kumarappa.