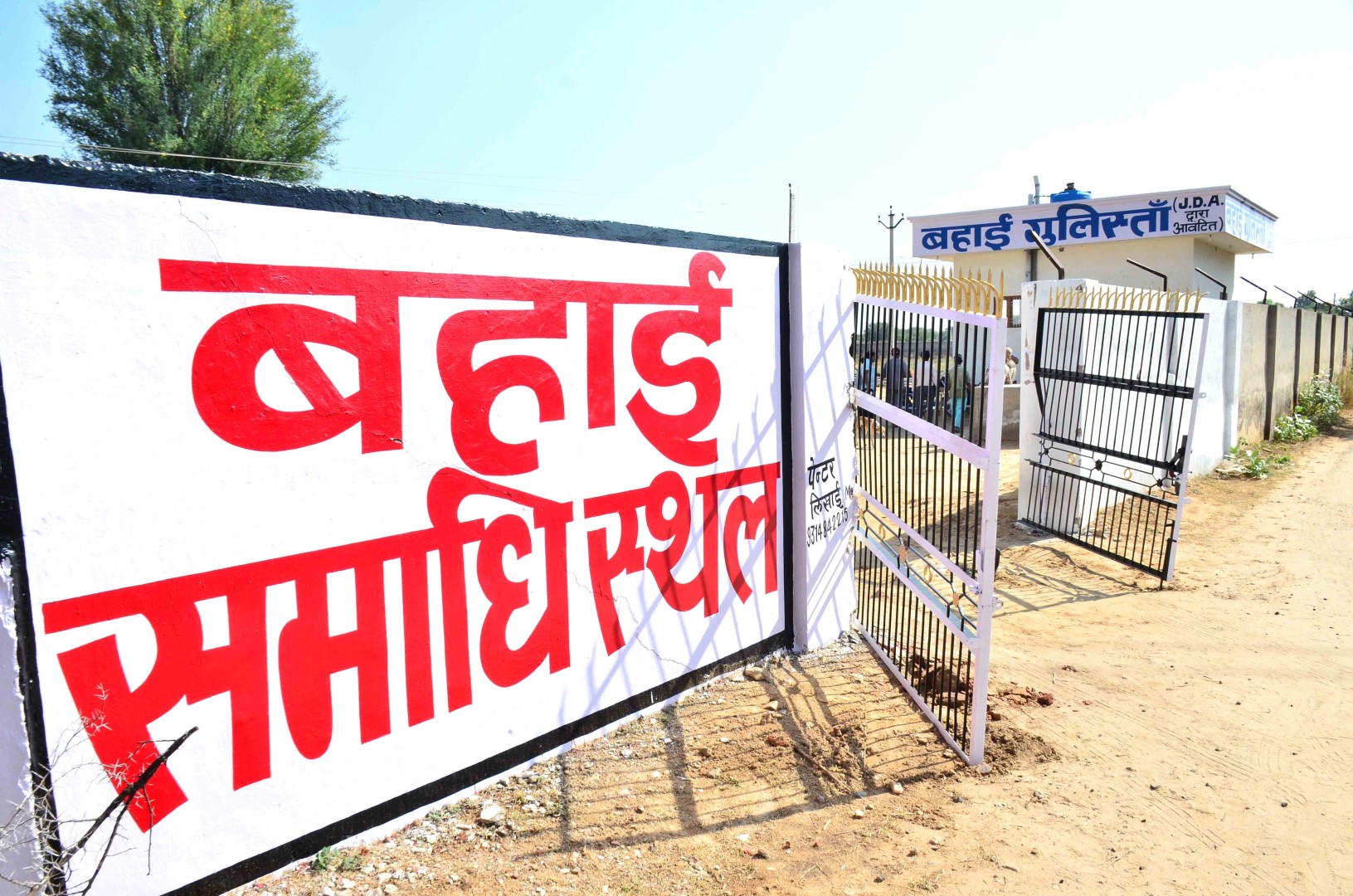 The entrance to the Baha'i burial ground in Jaipur. Credit: Special Arrangement

Jaipur: The 20,000 strong Baha’i community of Rajasthan is visibly in fear ever since their Jaipur burial ground – the only one they have in the state – was violently attacked and vandalised by a vigilante group allegedly led by the local BJP leader and sarpanch on October 30.

The group of 50-60 miscreants not only beat up the chowkidar but broke parts of the under-construction prayer hall. They broke his mobile phone and ransacked the guard room, kitchen and toilet. The group also attacked the labourers working on the site.

“This is the first time in India that such an attack has happened to the peace-loving, apolitical Baha’i community”, said Niyaz Alam Anant, chairperson of the burial ground management committee. His father, Ashfaq Ahmad Anant, a well known writer, was the first to have been buried there after the Jaipur Development Authority (JDA) allotted 10,560 square metre of land to the community in 2002 in Ram-ji-ki-Nangal village on the outskirts of Jaipur near Sanganer Airport for establishing a burial place.

This is the only burial place of the community in Rajasthan, the largest state of India. The last Bahai who was buried there last month was Pundit Prakash Narayan Mishra, a writer, whose was body was brought from Kota, 250 km from Jaipur. The community’s population in the state is around 20,000.

The Baha’is have been coming to India since 1850, making the country their home and constituting one of the smallest religious minorities, pointed out Kavita Srivastava, president of the People’s Union For Civil Liberties, Rajasthan, a human rights organisation that has taken up their cause. “They have never before seen this kind of intolerance and aggressive behaviour towards them in the country.”

Representatives of Jaipur’s 1000-strong Baha’i population appeared before the media on Saturday to describe what happened. They said that Nathu Jangid, sarpanch of the village, had spearheaded a campaign against the burial place. This forced Rajesh Meena, treasurer of the local Spiritual Assembly of the community, to register an FIR with the Sanganer Sadar police station on October 30.

The community representatives pointed out that Jangid won his election on the ground that he would get the burial place removed and get it replaced by a school playground.

One of the considerations for choosing the location for the burial ground was that it was adjoining the cremation ground of the village, Anant pointed out.

The JDA’s Land and Property Committee in its resolution of August 8, 2002 not only decided to allot the land for the burial place but also resolved to build a boundary wall around the premises. Accordingly, the boundary wall was constructed by the authority while handing over the place to the community. Copies of the related letter of the JDA to the community and the resolution are with The Wire.

Since the land, being close to National Highway-12 (Jaipur-Jabalpur), had become very valuable over the years, the sarpanch decided to communalise the issue and get the land back, Srivastava alleged. Consequently, he motivated the tehsildar of the JDA, Juhi Bhargava, to stop construction of the prayer hall. Bhargava then gave a report to her superiors that on “orders” she would carry out demolition, Srivastava charged.

Though JDA officials with whom the Baha’i representatives met on October 28 had told them there was no dispute over the title of the land, the community temporarily stopped the construction.

According to the FIR the Baha’i representative filed with the police, Tehsildar Bhargava visited the burial place following a complaint by the sarpanch and advised the community to take proper permission from the JDA before going ahead with the construction of the prayer hall. In the Baha’i tradition, the hall is also needed for bathing the dead bodies and other pre-burial rituals.

The tehsildar also advised the Baha’is to come to her office to file their application for permission, Anant said. The community representatives complied with her instructions and stopped the construction work, he added. Before they could approach the JDA, however, the burial ground was attacked, he said.

Build up to the incident The under-construction large prayer hall that was damaged in the incident. Credit: Special Arrangement’

The Baha’i representatives in a joint statement pointed out that during the sarpanch election campaign, Jangid was heard promising the villagers that he would get the burial ground demolished. On certain occasions he called the community ‘Muslim’ while on others ‘Christian’. “Since Baha’is, as a rule, don’t participate in party politics, we ignored the campaign”, the statement said.

“After the elections, the sarpanch’s men, from time to time, started threatening and intimidating the chowkidar. One day, the sarpanch, accompanied by some JDA officials, demanded that we produce the allotment letter for the land. This was shown to them. Despite this, he organised a series of village meetings for getting the burial place removed. But when chowkidar was threatened and told to leave the place or else face dire consequences, some Baha’is met Jangid to appeal for peace. He assured them that the chowkidar would no longer be harassed and that he would resort to legal remedy, to which we agreed,” the statement said.

The PUCL sees this incident as one more instance of the growing intolerance across India and as evidence of “state support for right wing groups”. The confidence of these vigilante groups is very high as there is direct or indirect state support, Srivastava alleged. “Even while the press conference was on, the chowkidar was threatened by the ‘villagers’ that he would not be spared if he gave their names (to the police).”

The PUCL says the police diluted the relevant sections while lodging the Baha’is’ FIR. Simple sections of unlawful assembly, voluntarily causing hurt, wrongful restraint, mischief and trespass were applied, leaving out section 295 A – deliberate and malicious acts intended to outrage religious feelings of any class by insulting its religion or religious beliefs. Section 297 dealing with trespassing on burial places too was left out. Incidentally, the sarpanch was at the police station when the FIR was being lodged.

The PUCL has demanded the immediate arrest of the sarpanch and other attackers. It has also demanded that the role of the tehsildar be examined and conspiracy sections be applied. Chief Minister Vasundhara Raje must publicly reassure the Baha’i community of its safety and security and justice in this matter and their burial place must not be disturbed, Srivastava said.

Jangid, an active member of the ruling BJP, told The Wire that as the villagers’ sarpanch, he was with their demand of replacing the Baha’i burial ground with a school playground. The matter had already been taken up with the chief minister, he said. If required, the courts would be approached for shifting the burial ground which, according to him, was illegally allotted to the Baha’is.

Referring to the October 30 incident, the sarpanch said that the chowkidar had annoyed a few youth returning from a cremation by refusing to offer them drinking water.

India has been associated with the Baha’i faith right from its inception in 1844, since one of the first 18 people who recognised and accepted the Bab, the forerunner of Baha’u’llah, was from India. Today, over 2 million Baha’is representing the great diversity of the Indian nation live in every state of the country in over 10,000 localities, according to the official website of the Baha’is of India.

The Baha’is have been persecuted in some Islamic countries, notably Iran, on the grounds that theirs is not an independent religion but apostasy from Islam.