The meeting, called ‘The idea of a university’, was hosted by the left-wing student group All India Students Association (AISA) at the arts faculty at Delhi University’s north campus. 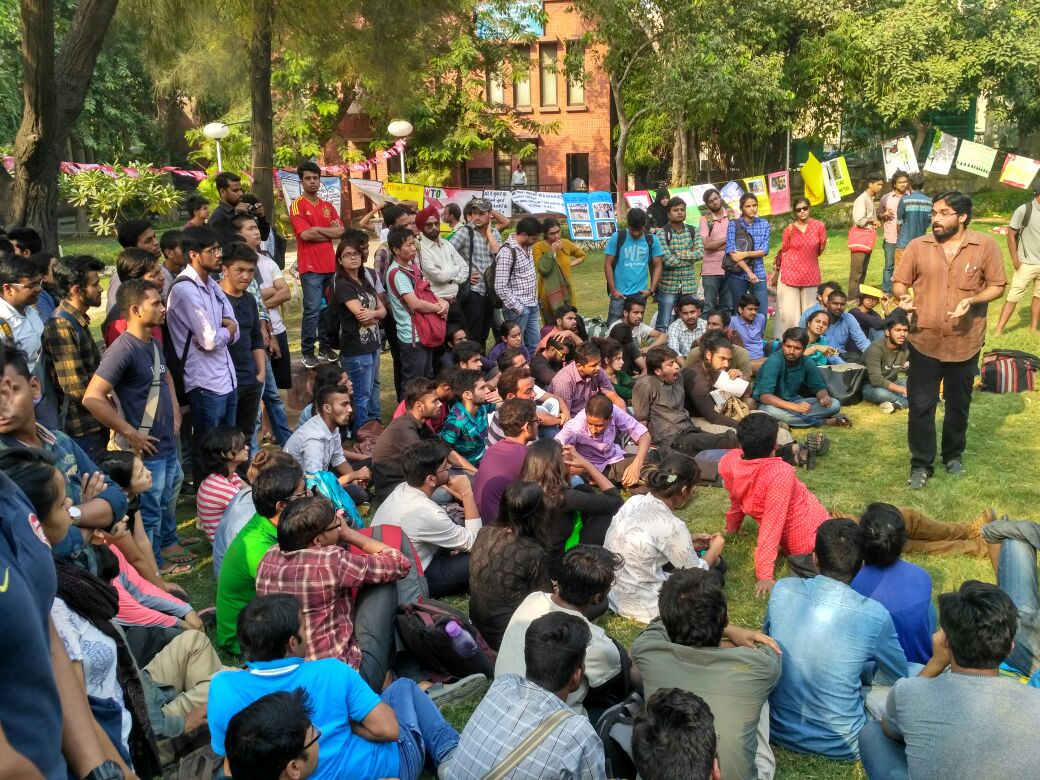 'The idea of a university' meeting. Courtesy: Special arrangement ‘The idea of a university’ meeting. Courtesy: Special arrangement

New Delhi: Members of the Akhil Bharatiya Vidyarthi Parishad (ABVP), the student wing of the BJP, allegedly physically assaulted some Delhi University students who were participating in a public meeting yesterday, October 27. Many student activists from different groups sustained minor injuries in the attack, which was allegedly led by Delhi University Students Union (DUSU) president Amit Tanwar. Students present in the meeting said that a journalist working with the Times of India, Ibrar, was also injured in the attack, adding that the violence took place in front of a large troupe of police personnel stationed there to keep guard.

The meeting, called ‘The idea of a university’, was hosted by the left-wing student group All India Students Association (AISA) at the arts faculty at Delhi University’s north campus. Several eminent academics and activists spoke at the event. According to a student present at the meeting, the aim of the meeting was to provide a rational critique to the “declining autonomy of university spaces under the Modi government, especially in the light of “unilateral education reforms, attack on free speech in academic spaces and a clampdown on students’ movements against the privatisation and saffronisation of public education” over the last few years.

The ABVP, well-known advocates of the current political dispensation, saw the meeting as adversarial to its interests in the university. However, a few students told The Wire that the ABVP’s violent protest was unexpected, especially because many Delhi University teachers, all well known in their fields, spoke at the event.

While the overarching theme of the meeting was to discuss what students called the “oppositional attitude of the Modi government on student issues,” the immediate agenda was to protest against the two-year-old university rule on the use of university spaces for meetings.

“Since the last two years, DU administration lets you organise a group meeting only if you pay a fees ranging up to Rs 20,000. Even students have been barred from any public gathering if they do not pay up. This, according to us, is an absurd rule. We think it is a massive infringement of democratic spaces within the university. AISA and other democratic groups have been protesting against the rule,” said Sunny Kumar, an AISA activist and PhD candidate in DU’s history department.

Another AISA activist, Aman Nawaz, alleged that the rule is enforced selectively. “Only a few days ago, an NGO was permitted to hold the ‘Udaan’ theatre festival, in which BJP MP Manoj Tiwari and Anupam Kher, a well-known supporter of the BJP, were the chief guests. We feel this rule is nothing but a discriminatory practice of allowing one group and denying others to hold events. The meeting was in defiance of that practice as well. The university has been open for students’ activity till recently. In the last two years, we have seen that academic activities and students’ protests were not allowed first and then university spaces were shamefully rented for profit.” AISA activists alleged that the ABVP, along with a few sympathisers in the DU administration, attempted to deliberately disrupt the event. Many independent students with whom The Wire spoke also agreed.

“At around 1 pm, soon after the speakers started to address around 300 students who had gathered there, some security personnel and some staff members of DU started tearing up the posters and banners of the event. Because of the objection raised by the DU staff on the use of microphones at the event, the organisers decided to go ahead without them. But soon, we saw the DUSU president and his supporters abusing the speakers and students present there. They threw stones and soap bars on students and kept disrupting the meeting. The police did not take any action against them,” said a student who refused to be named.

In a press release, the ABVP denied the allegations. “In a most undemocratic and intolerant manner, some goonda elements of AISA attacked a peaceful protest of ABVP against vitiating the communal atmosphere of North Campus by its hired outsider goons. For almost 2 hours (1pm to 3 pm) ABVP was protesting against attempts of communist elements to vitiate the communal atmosphere of the campus inside the Arts Faculty.” (sic)

However, the group accepted that there was a “scuffle” and a journalist was injured in their protest. “In a most surprising manner, an outsider claiming himself to be journalist, also started shouting on ABVP activists and pushed and shoved students. He was raising anti-ABVP slogans and deliberately provoked students. At the end of the scuffle, he was falsely claiming that he had sustained serious injuries,” the ABVP’s press release said.

However, video footage shot by some students and circulated on social media suggests that ABVP activists tried to breach the police chain in their attempts to disrupt the meeting.

Faculty members of DU also condemned the incident and held the ABVP responsible for disrupting the meeting. “What happened in DU today was shameful. The ABVP has been trying to vitiate the democratic academic environment in our universities. We feel that, over the last two years, attacks on students and teachers have increased. Rohith Vemula’s suicide, the arrests of students in JNU or the recent incidents in the Central University of Haryana show the government’s ineptitude. Either it does not know how to deal with academic matters or it is acting in the interests of an RSS-backed fascist agenda. Unfortunately, the administration in most universities is increasingly becoming hostile to the academic community’s interests. The obvious casualty in the process is the right to speak freely. However, there is a growing resistance in universities against such authoritaritarianism. The meeting was a part of that resistance movement, and what the ABVP did today is only a symptom of the impunity that it has come to enjoy under the present government,” Uma Gupta, a faculty member at DU’s Indraprastha College for Women, told The Wire.