Jugaad Rehris, the Indigenous Motor Vehicles That Are a Toast to Punjabi Innovation

Designed by unlettered mechanics from rudder to axle, these Rehris would pose a challenge to automobile engineers – not only for their ingenuity but also for their durability and multipurpose functionality. Jugaad Rehri, a vehicle that is locally designed from various parts in Punjab. Photo: Rajesh Karkera/Flickr CC BY NC ND 2.0

Chandigarh: The Punjab government has recently rescinded its earlier order banning the locally designed and fabricated popular ‘Jugaad Rehri’ vehicles, powered by all manner of diverse power packs and fitted with assorted innovative attachments which defy all accepted principles of automotive science and design.

On the instructions of chief minister Bhagwant Mann, the police have withdrawn their April 18 order proscribing these bizarre, but highly innovative unregistered smoke-belching vehicles, known variously as Maruta’s and Gharukka, on the grounds that they were responsible for a growing number of road accidents in the state.

By retracting the veto on Rehris, the newly elected CM was responding to pressure from opposition parties, who claimed that outlawing these vehicles which ply across Punjab, ferrying farm produce, people, livestock and even garbage, would render unemployed thousands of people, principally in rural areas. In his directive, Mann had stated that his government’s aim in withdrawing this embargo was to provide employment to people, and not snatch it from them.

When it comes down to jugaad or innovation in transport, there is little anywhere in the world that matches these Charabanc-like road-runner Rehris that also double as rural taxis, despite the countrywide explosion in automobile availability over the past three decades. Every day, these vehicles transport not only hundreds of children to and from school, but cheaply convey scores of people packed in tight scrums from outlying villages to nearby towns.

Occasionally, they also carried drunken revellers to weddings and mourners to funerals in several parts of Punjab’s Malwa, Majha and Doab regions. And, in some villages, the large wooden sides of these vehicles doubled as blackboards for children receiving instruction in Punjabi and English during evening classes, further augmenting the Rehri’s overall utility.

In effect, these Rehris were principally motorised bullock carts, each costing around Rs 50,000-75,000 that first surfaced in Punjab and Haryana in the early 1990s, before spreading thereafter to even Rajasthan and parts of western Uttar Pradesh, at a time when the availability of vehicles was low and dear. Entirely indigenous in content, from rudder to axle, these Rehris would, doubtlessly pose a mechanical challenge to all automobile engineers, not only for their ingenuity but also on account of their durability and multipurpose functionality, in what is unquestionably a champagne toast to Punjabi jugaad. 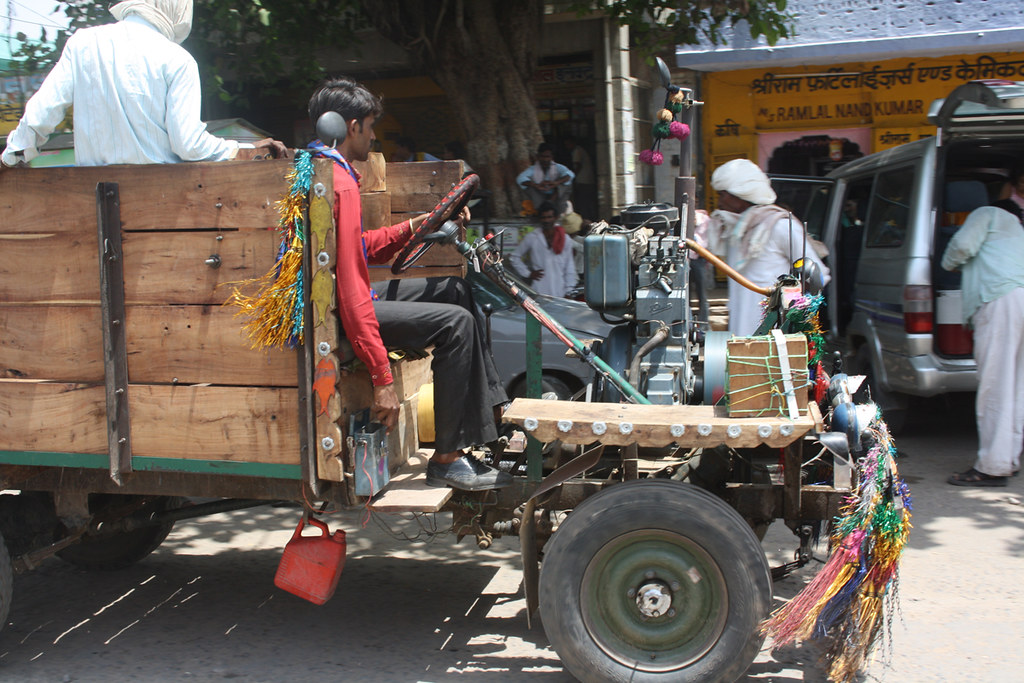 Primarily, the Rehris were built by fitting locally available 10-14 horsepower diesel pump sets, used normally to draw up water from underground wells for irrigation, onto steering wheels of abandoned jeeps or trucks through other similarly cannibalised parts, all of which were then mounted on long wooden, four-wheel trailer-like chassis’.

The juddering pump-set generated the power that spun a canvas fan belt, which in turn, worked the camshaft attached to the rear wheels, all of which rendered the contraption capable of moving at a dizzying top speed of some 45 km on pitted village roads and dirt tracks with 20-30 people, or an equally formidable load of grain, on board.

Most Rehris, many of which were colourfully decorated to reflect the local ethos and culture of their particular region, had no shock absorbers; their pneumatic wheels were normally robust enough to endure bumpy rides over cavernously potholed village and mofussil roads. Over time, the Rehri creators, the majority of who were illiterate and operated from rudimentary workshops, with little or no precision instrumentation or automation, had outfitted them with a 4-speed combination gearbox – three forward and one reverse – and radiators, appreciably upgrading their overall capability and road endurance.

But for most, if not all Rehris, brakes were a problem – and the reason behind the initial ban imposed by Punjab Police, as this grave shortcoming induced disastrous accidents, particularly at railway crossings. Many Rehris were largely coaxed to a slow halt, either by switching off the engine or by dexterously disengaging the fan belt in a manoeuvre which, without doubt, would be the envy of accomplished gymnasts.

The relatively more ‘sophisticated’ Rehri models, however, adopted the ‘reverse thrust’ principle employed by jet aircraft to come to a halt on landing, by simply reversing the driving belt that retarded the engine, eventually bringing the vehicle to a standstill. In some instances, the driver’s aide, or alternately, one of the passengers, was required to jump off the moving vehicle and deftly insert a log under the wheels to retard its speed, before bringing it to a stop. This inventive ‘brake’ too necessitated athletic dexterity, which many Rehri operators and their assistants developed over time. 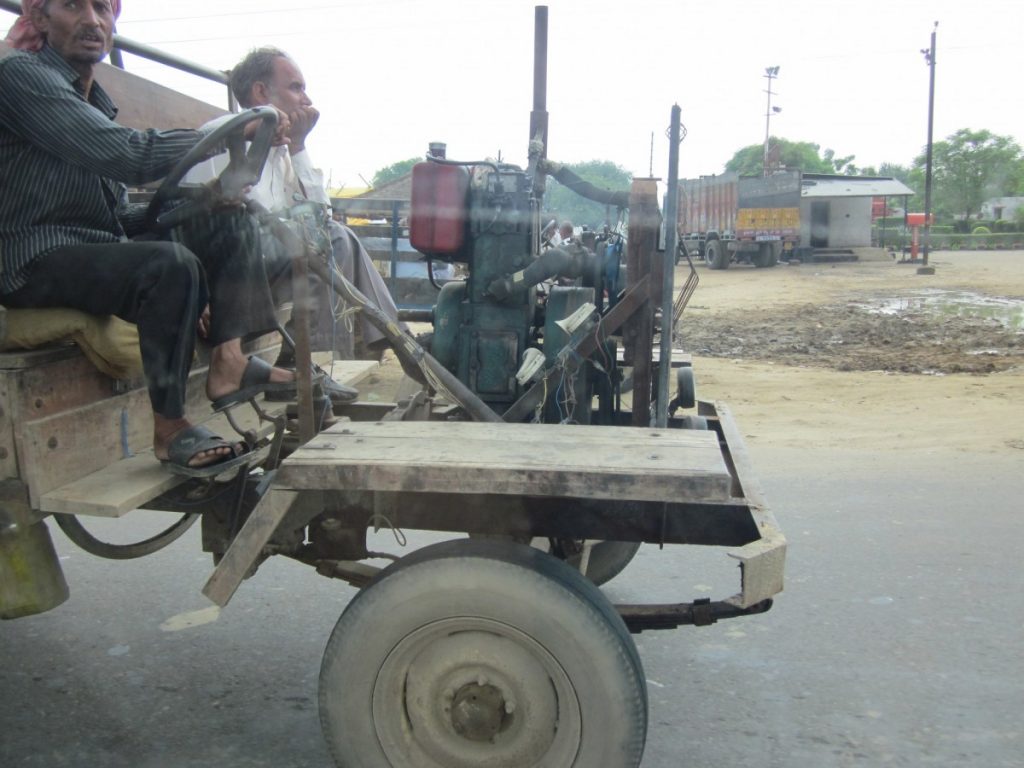 The diesel engine of a Jugaad Rehri. Photo: Abhijit Bhaduri/Flickr CC BY 2.0

But the Rehri’s utility and folksy charm did not end merely with transportation.

Off-road, their power packs were put to use to operate tube-wells, fodder cutting machines and appliances to extract sugar cane juice to make gur and shakkar. “The Rehris were an essential part of rural Punjab,” said Surit Singh of Manuke village in Jagraon district near Ludhiana. Their socio-economic significance was undeniable, he added, as they were not only inexpensive to build and economical to run, but had the endurance of a phuladi ghora or ‘iron horse’.

Meanwhile, in some parts of Punjab, like the border district of Tarn Taran, near Amritsar, the Rehris were supplemented by yet another jugaad machine, locally dubbed the Bhoond (Wasp). This was a motorcycle-powered go-cart with three wheels, capable of transporting 8-10 people or alternately, an equivalent load of grain or merchandise. Priced at around Rs 70,000, its specially designed body with two wheels was attached to a motorcycle – usually a clapped-out and refurbished two-stroke 150 cc bike – with a specially designed chain that mysteriously operated the contraption.

Complementing the Bhoond, in other regions, was the smaller and cheaper eponymously named ‘Hero Panther’ motorised go-cart, pulled by a 60 cc locally made moped, which gave the machine its moniker. “It’s economical and ideal for my requirements,” said one vegetable seller in Jagraon, who daily carted loads of up to 100 kg on one such Panther go-cart, from the local wholesale market.

And while equally remarkable innovations do exist in other parts of the world, the factors perpetuating the popularity of Rehris and its clones, was the availability of rural workshops manned by brilliant, albeit unlettered mechanics, with truly amazing fabrication and jugaad skills, a Punjab government official admitted. It’s astonishing how much jugaad talent there is in Punjab and elsewhere across India, he said, adding that it needs to be put to good use. 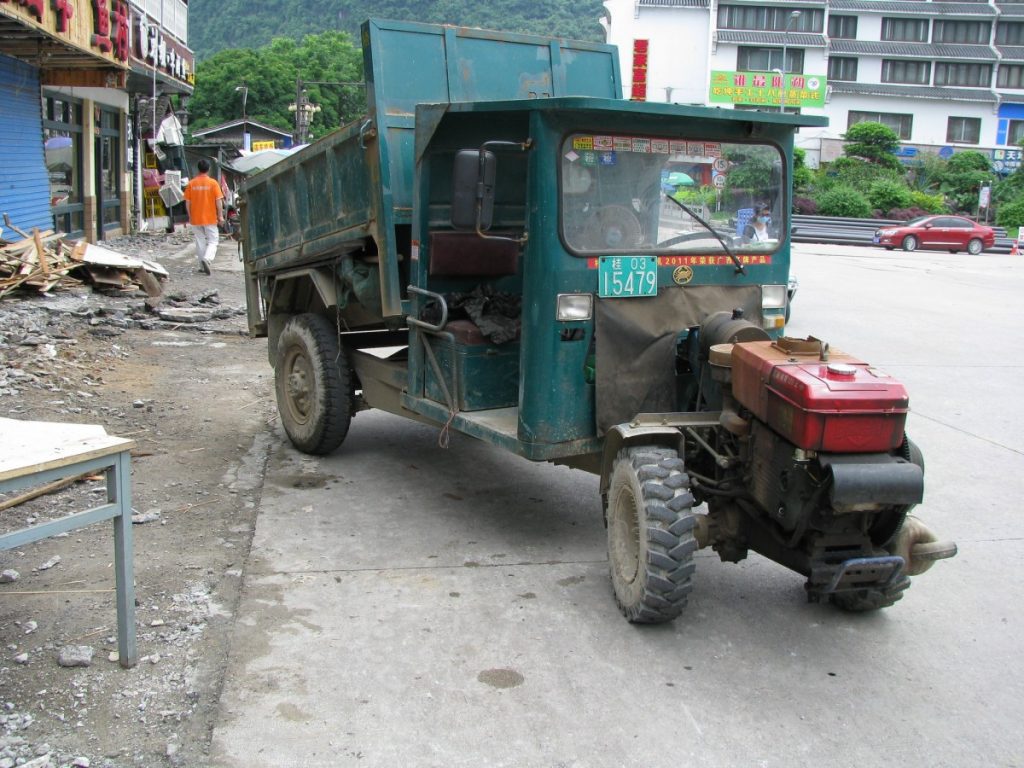 A jugaad vehicle in China. Photo: shankar s./Flickr CC BY 2.0

In turn, this evoked the apocryphal account in Punjab’s Rehri mechanic circles about former Prime Minister Manmohan Singh asking US President George W. Bush, on his maiden visit to India in March 2006, whether he had any special requests that he wanted to be fulfilled during his trip. Bush, as the version in Punjab goes, in all seriousness responded by requesting Singh that he very much wanted to meet Mr Jugaad, about who he had heard so much in his pre-visit briefings in Washington and who, he was told, was the prime driver behind India’s innovative flair, which the US president wanted to duplicate back home.

Perhaps, Singh should, in all impish innocence, have organised a meeting between Bush and a Rehri fabricator from Punjab, passing him off as Mr Jugaad.

It would certainly have been instructive for the POTUS.