An Experimental Eco-Tourist in Nagaland

Homestays bring travellers to the heart of distant villages, so the residents have new reasons to cherish their forest ecosystems. 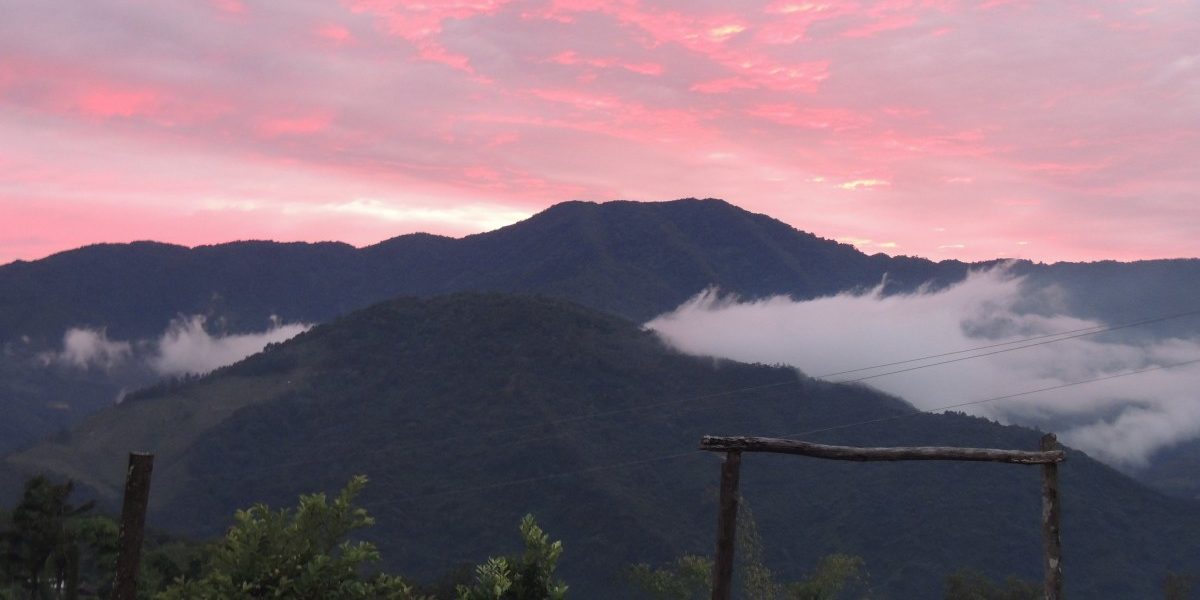 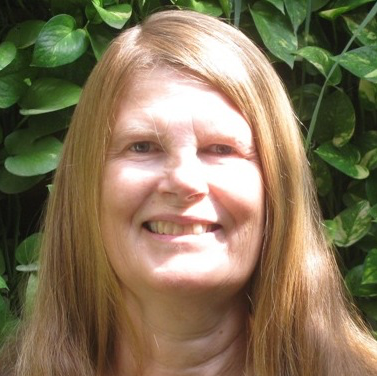 In the last week of October, I found myself sitting under the stars by a roaring fire in Sukhai village, high in the forested hills of Nagaland’s Zunheboto district. With me sat one of my hosts, the square-built and charismatic Ivan Zhimoni, and Siddharth Edake of The Energy and Resources Institute (TERI) in New Delhi. For the first time in my life, I was an experimental eco-tourist.  If the experiment worked, then it could be a game changer for Sukhai. It was already working for me.

Although I knew Nagaland falls in one of the world’s greatest biodiversity hotspots, it was quite another thing to see it. We had traversed narrow, kuchha roads, through some of India’s most glorious scenery. Nagaland is 80% forest, nearly all of  it belonging to village communities. These spotless villages are perched high on ridges, spurs and hillsides. Each home has a separate spacious kitchen – a combination of hearth, cookhouse and adda – its livestock and its vegetable garden. What little refuse we saw was carefully deposited in wayside hand-woven litter baskets. 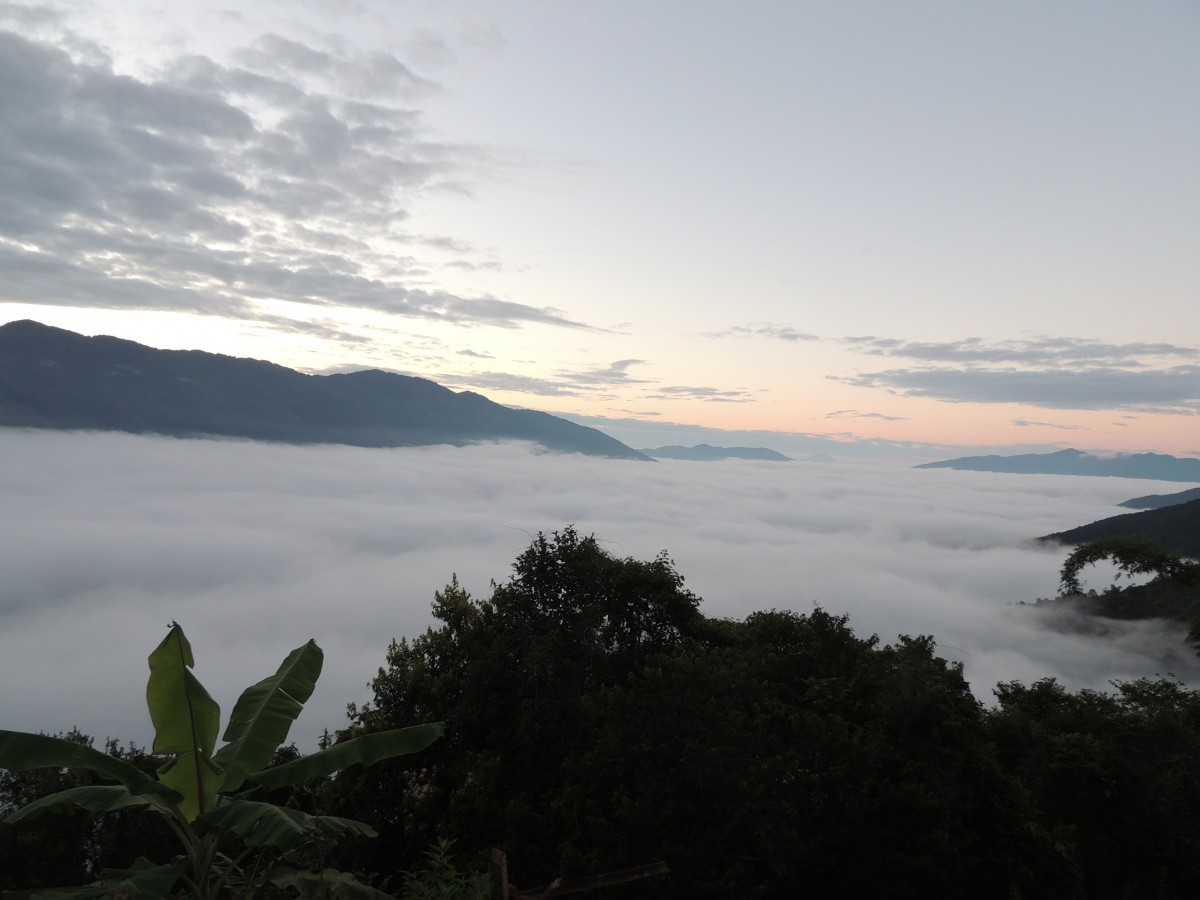 Clouds fill the valley around Kivikhu.

The roads snaked down to the bottom of river valleys where the rice harvest was in full swing. Climbing again we noted patches of jhoom fields, created by cutting and burning the forests, full of varied crops such as yams, mustard and ginger. The forests here had in former times provided Naga hunters with an abundance of wild meat for the pot. But no more.

The easy availability of guns and air rifles has decimated animal populations across the state. Portable battery packs clear rivers of fish by means of a simple electric shock. Forests themselves have in many places been depleted by timber mafia, and by increasingly short cycles of jhoom cultivation. 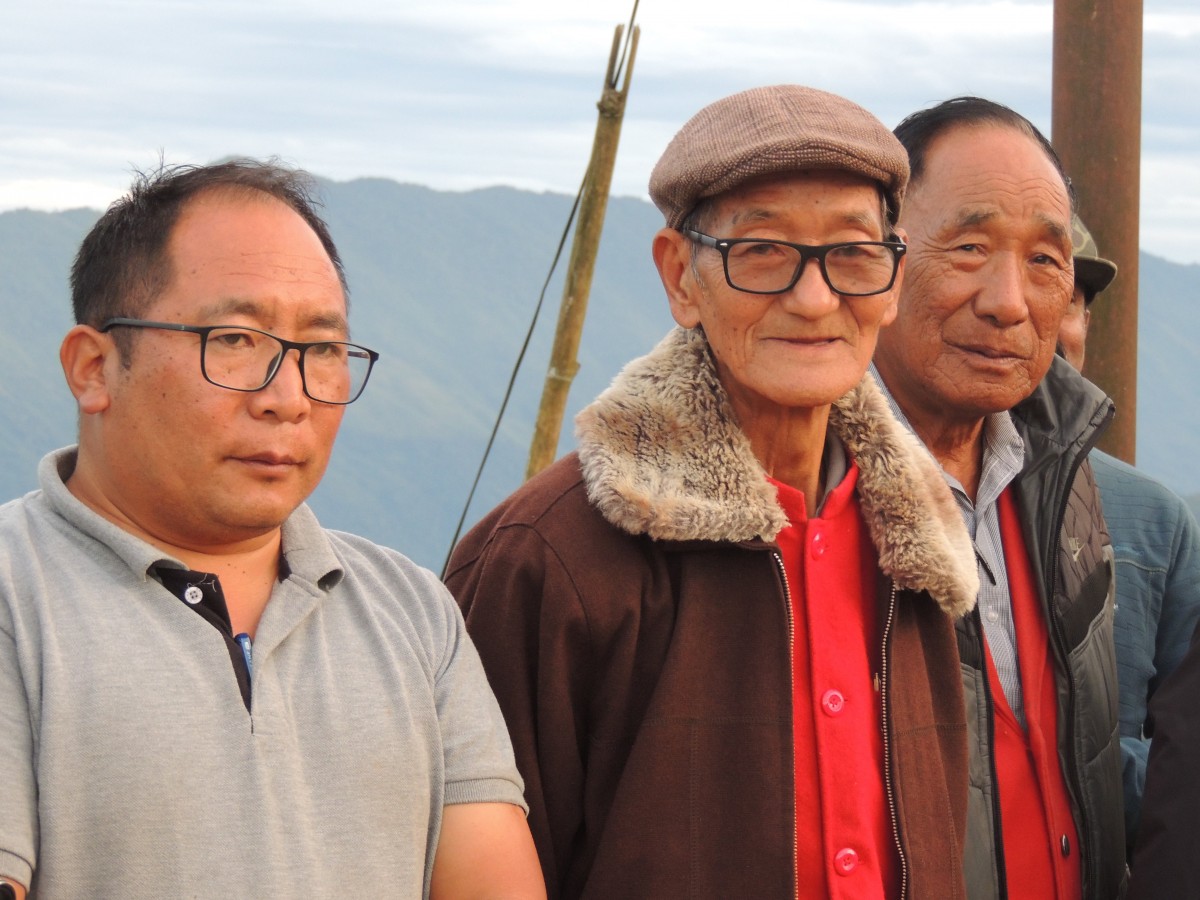 Tapping the wealth of the forest

With control of forests in the villages, the solution had to be found there too. TERI, with the support of the Nagaland forest department, surveyed Nagaland’s 1,200 villages for their response to this crisis. So it was that Edake first came to Sukhai. Here, Zhimoni, the village elders and council had already persuaded people to donate land to create a community conserved area (CCA), a stretch of inviolable forest. The local people’s enthusiasm and interest also made Sukhai a natural choice for a People’s Diversity Register.

With TERI’s support, they documented their village, their traditions and all the flora and fauna that they knew in detail. This was expanded to encompass the nearby villages of Ghukhuyi and Kivikhu, which had their own CCAs. The three villages united under the Tizu Biodiversity Conservation and Livelihood Network, named after the fast-flowing river that flows below them, and decided to completely ban all forms of hunting, both in the CCAs and in all the other village land. It was a huge decision to take, and the journey has there has not been always easy. 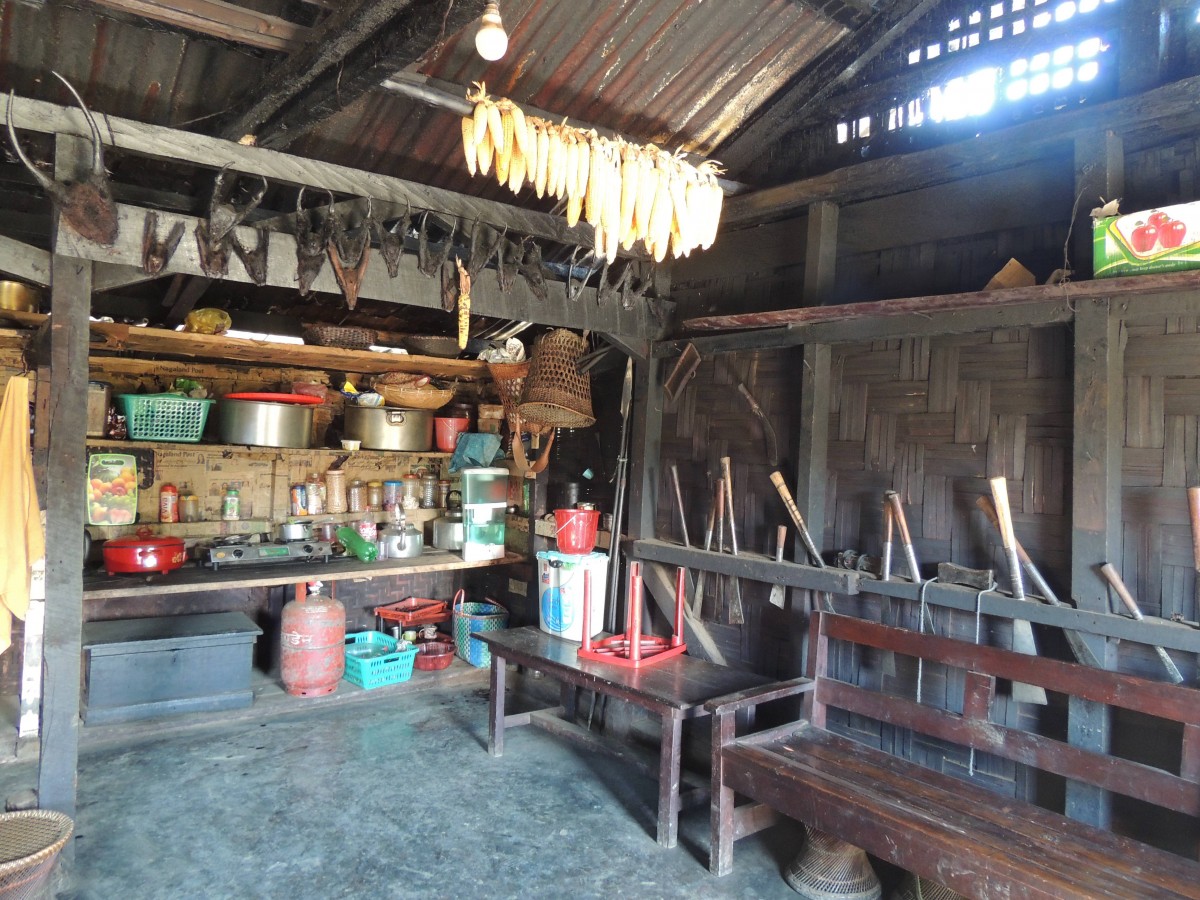 A Naga kitchen in Kivikhu with old hunting trophies. There is no more hunting in the area.

“It’s all a great challenge, but then we should face it!” Zhimoni told me. “When you give up your land for government schemes, like roads, you get compensation. So people asked, “If I give up my forest land, give up hunting, what will I get in return?” Eco-tourism, homestays, we thought it is one way. No one believed us to start with. People are used to seeing birds and butterflies here. They didn’t value them. But now they see people from distant places, like you, coming to see them and they have changed their minds.” 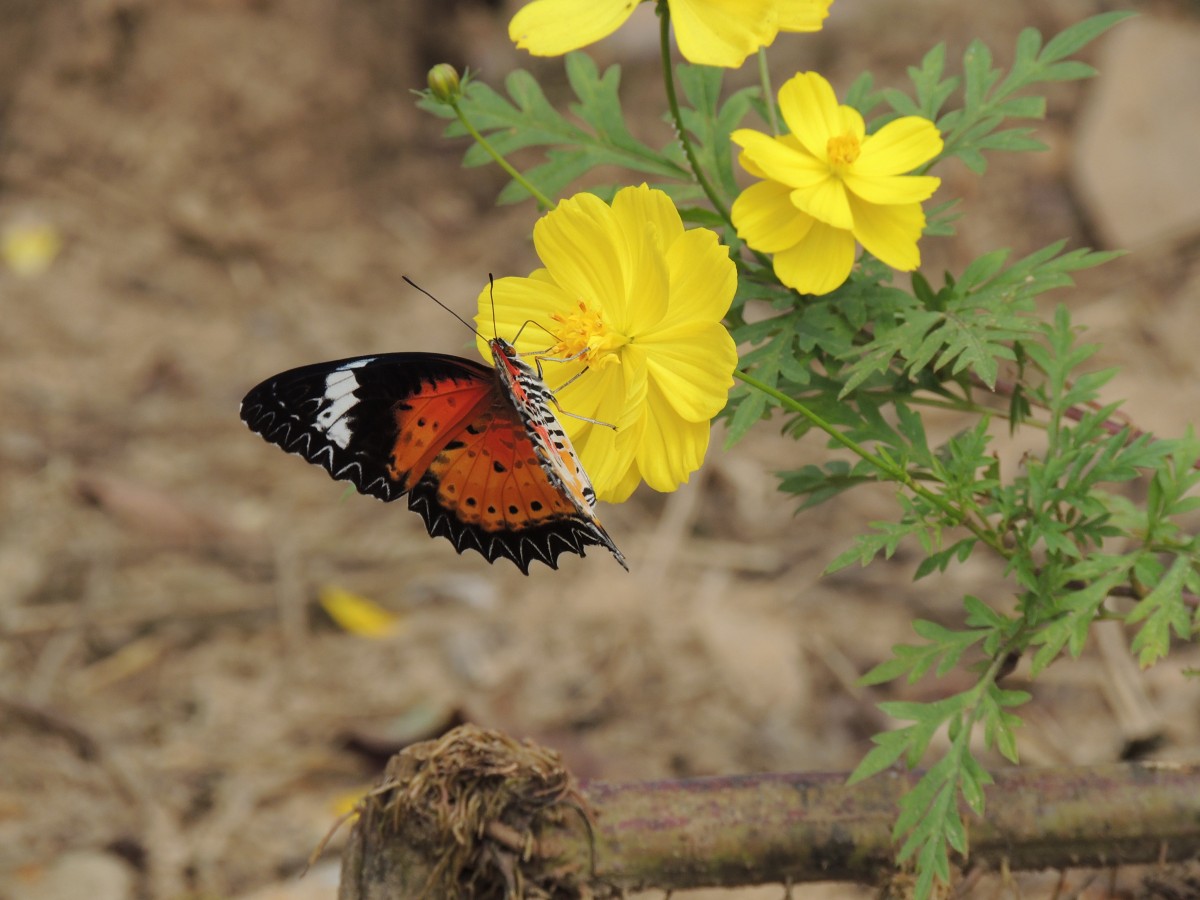 Just a couple of posts on WhatsApp by the TERI team now supporting the network with livelihood training had been enough to get together 15 bird and butterfly enthusiasts for the trip. But providing added income to those presently in the village was not the only thing on Zhimoni’s mind.

“The village is emptying,” he continued, “People are leaving for the towns for jobs, for education for their children. My aim is to make it possible for the migration to stop. For people to come back home.” 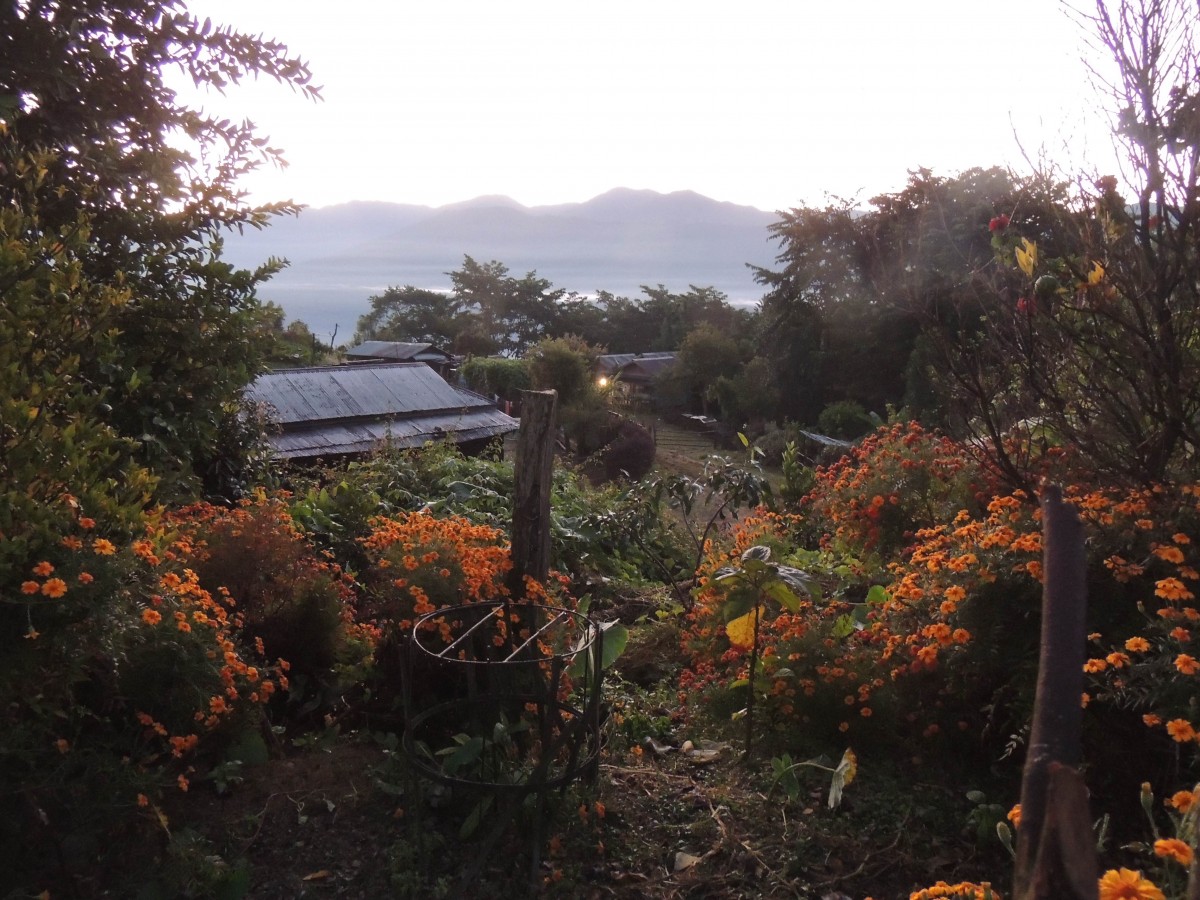 Dawn at a homestay in Kivikhu.

New family and other animals

The rest of my party arrived, their faces glowing with achievement after a successful owling walk. The following morning we peered into the undergrowth to spot the golden and scimitar babblers and silver-eared mesias we heard calling, and then, as it grew hotter, photographed butterflies. Bird populations still need time to bounce back, although the amount of activity was highly promising. The butterflies were glorious in colour and variety. For me personally, however, neither compared with the experience of staying in this Sema Naga village itself. 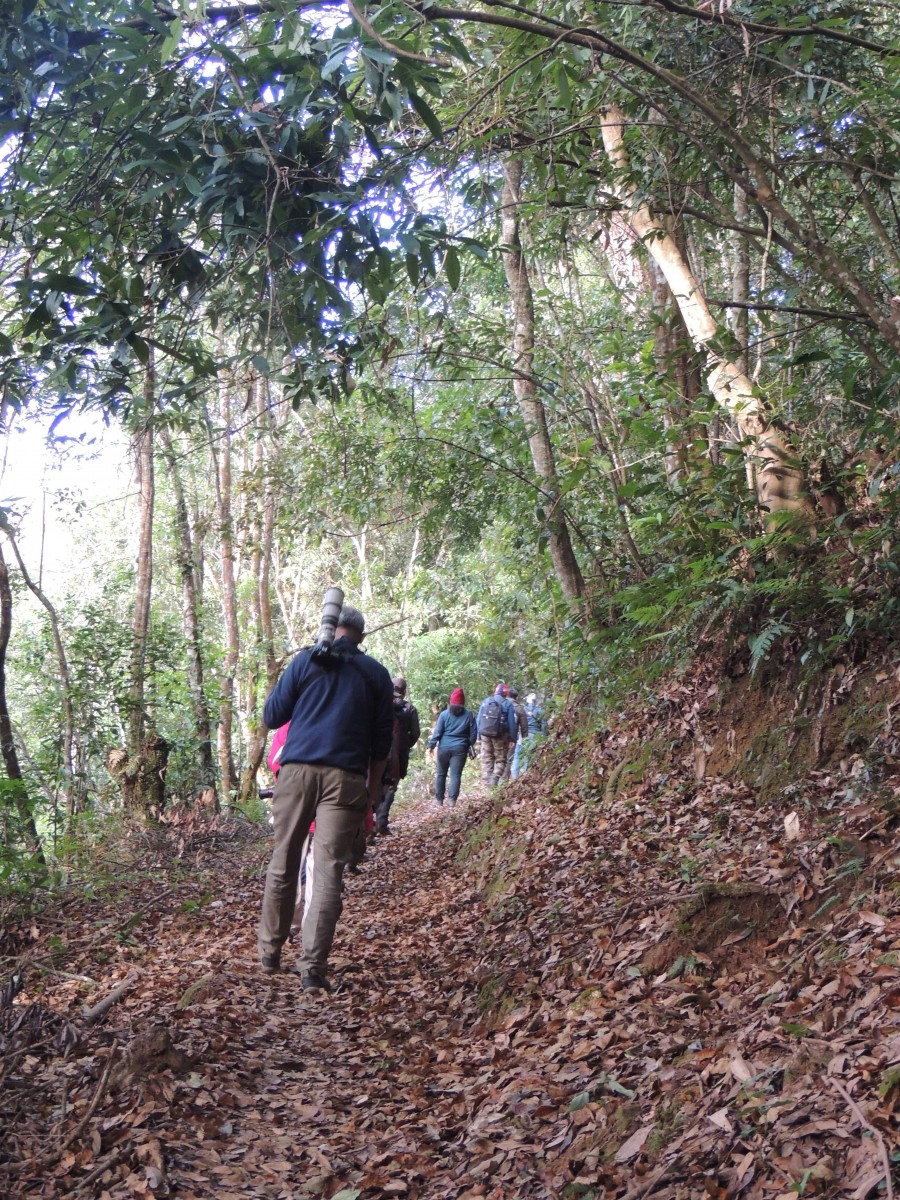 Eco-tourists set off on a wooded path outside Kivikhu.

In network villages, homestay means just that. Children will move to the next room and you take over their bedroom. Nothing, so far, has been boringly standardised to metropolitan taste. (Bathrooms are decidedly non-attached.) Drinking water from pristine springs is stored in an array of massive kettles in the kitchen. The houses are of bamboo, wood and tin sheets with verandahs bordered by flowering annuals. Sprays of blue orchids festoon trees; guava and orange trees hang heavy with ripening fruit.

Cockerels wake you well in time to see the sunrise over the magnificent mountain landscapes. Your hosts are happy to spend time chatting with you in whatever language you share. Food is fresh and delicious, with fascinating unfamiliar salads, and for us was cooked at one location, probably because of our weird habit of eating three times a day. Villagers generally eat only twice – in the early morning and late afternoon. The cultural evenings are a mutual affair with guests expected to sing and dance too, causing much hilarity among the audience.

At neighbouring Ghukhuyi, we were invited as delegates to an interaction in the village hall. The Gaon Burrah, or village elder, Chief Vikuto, a tall and immensely impressive individual, addressed us in impeccable English and asked for our reactions to our stay. He listened attentively to our replies and suggestions, thanked us and promised us a great feast on our next visit. After tea and great wedges of cake, we continued to our last homestay in the much bigger village of Kivikhu. At 1,900 metres, 200 metres higher than Sukhai, it suits cardamom and this has become a valuable crop.

With the boundlessly energetic CCA organiser Bokato Muru and his colleagues to guide us, we explored the steep hillsides before descending to the River Tizu. Butterflies congregated on its banks, but as we hurried to distinguish the red-breasted jezebels, and chocolate and chestnut tigers, we noticed three men on the opposite bank. One had a battery on his back connected to two sticks he held in the water. The others waited to collect stunned fish. The Tizu river was the boundary between two villages. Kivikhu had a hunting ban but its neighbour didn’t. 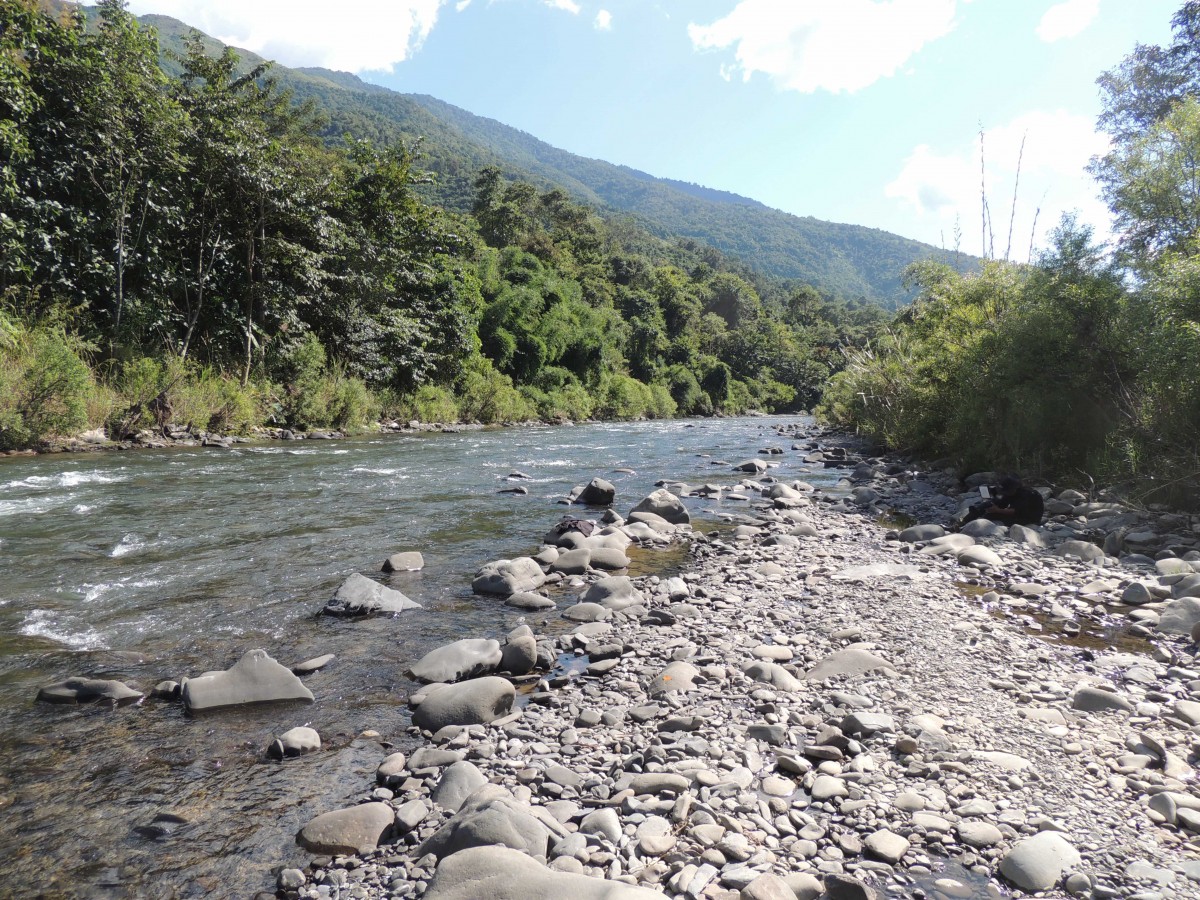 A view of the Tizu River.

It was clear that the spread of CCAs  and areas where hunting, or at least non-traditional methods of hunting, are  fully banned, can only benefit Nagaland. But to achieve that initiatives like that of the Tizu Biodiversity Network must be seen to succeed. Sadly funding is still sorely needed to support the next phase of livelihood development and to extend the network’s model to neighbouring villages. Hopefully that funding can be found soon because there is a larger cause here at stake than Nagaland’s alone. As Chief Vikuto said in Ghukhuyi, “We are saving forests, not just for the butterflies and the birds and the animals. We are saving them not just for ourselves, but for every human being.”

To reach the Tizu Valley Homestays: The villages of Sukhai, Gukhuyi and Kivikhu are in the Satakha block of Zhunheboto District and are best reached from Kohima, leaving early in the morning. The best time to visit is October-May. Contact: Bokas Muru Email: bokas@gmail.com tel: +91 98626 81713. For more details of the CCAs visit  nagalandcca.org.