Members of US and Chinese trade negotiation delegations prepare for a group photo at the Diaoyutai State Guesthouse in Beijing, China on February 15, 2019. Photo: Mark Schiefelbein/Pool via Reuters

The US-China trade war has been at the centre-stage of economic discussions for quite some time now, with the world’s two largest economies imposing tariffs on each other’s goods.

Even though Donald Trump insists that his war has hurt the Chinese economy – with the country reportedly losing three million jobs and its GDP slipping to a 27-year-low of 6.2% – a relatively longer time horizon paints a different picture.

In fact, China is increasingly becoming less dependent on the US and the country’s slowing GDP growth rate could be for reasons other than the trade war.

Here is how the story unfolded

Over the last 10 years, trade interdependency between the US and China has fallen. Trade data actually shows that China’s dependence on the US has fallen faster. In stark contrast, the US continues its dependence on China.

The good news for policymakers in these two countries is that despite the trade war, long-term GDP growth (the trend for the last 10 years) is on the rise. 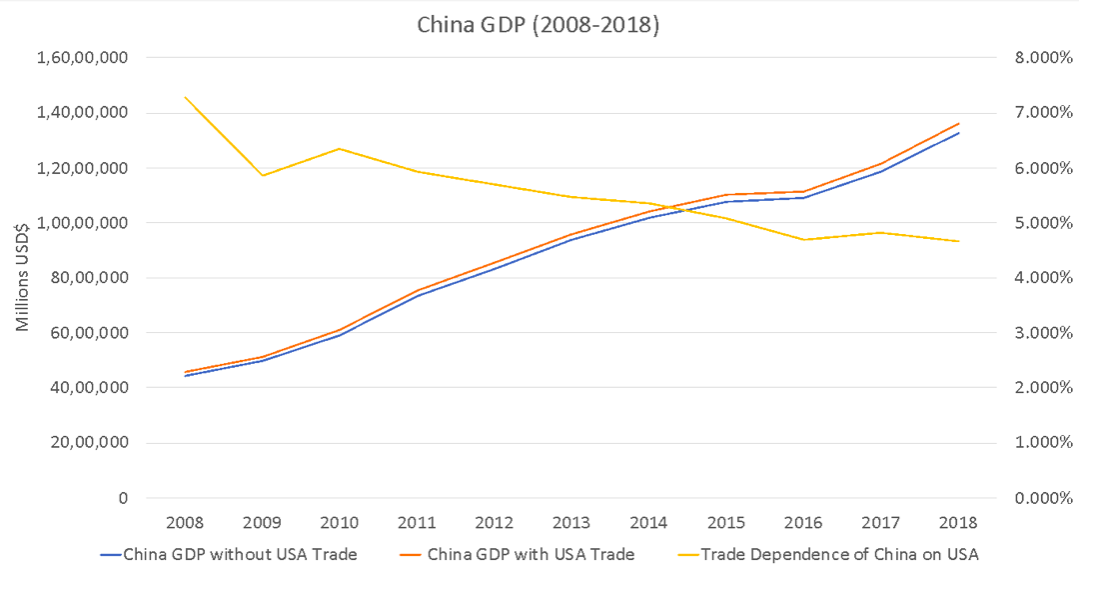 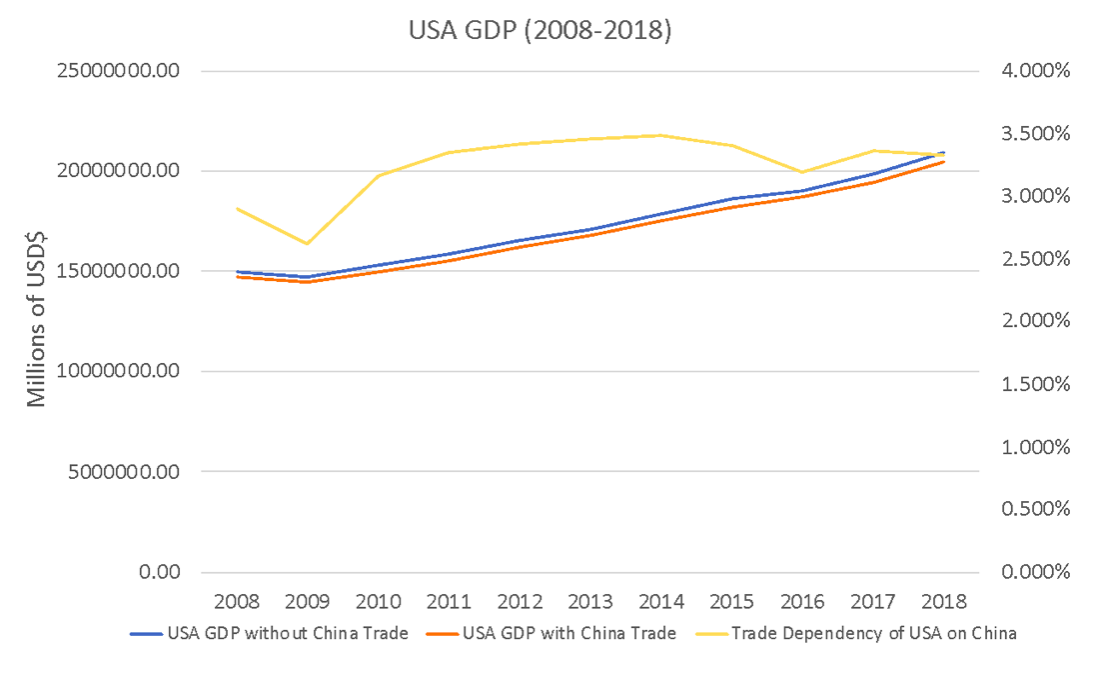 Also read: Trump’s Trade Wars Are a Trap, Not a Solution

These small changes in growth rate numbers are big in absolute terms, considering we are talking about two biggest economies in the world, the US at $20.41 trillion and China at $13.61 trillion). What is more startling from these observations, the US economy is likely to lose out more in comparison to China. The result does not change if we are to do the same analysis for the last 5 years. Little wonder that Beijing’s leadership is in such a defiant mood.

The main tenets on which the World Trade Organisation (WTO) functions is that a fall in tariffs barriers will lead to an increase in trade between nations. The beneficial effect of trade in increasing productivity and income growth is well known. Economies such as South Korea, Taiwan, and much of the southeast Asian nations catapulted to a higher growth trajectory through trade.

In fact, as evidence from China suggests, trade has been instrumental in lifting millions out of poverty.

However, as the US-China trade war showcases, there are factors other than tariffs which may affect business and hence, income.

For instance, non-tariff barriers (NTBs) such as anti-dumping measures, sanitary and phytosanitary sanctions, etc. are used as a tool to restrict market access. Since the close of the Doha Round of WTO negotiations in 2001, the multilateral trading system has stalled.

In its place, there has been an increasing move towards regionalism, with a proliferation of bilateral Free Trade Agreements (FTAs) and Regional Trade Agreements (RTAs). RTAs, and many FTAs, have moved beyond addressing traditional tariff barriers to trade, and cover an increasing numbers of NTBs, and so-called “behind the border” issues such as regulatory standards, investment rules, and intellectual property rights.

And these factors have played an important role in explaining the growth in a region rather than lower tariffs barriers.

Also read: At Each Other’s Throats, US and China Defy Pragmatism and Compromise

How China is managing to grow?

China is not new to this world of protectionism. The Global Trade Alert, a database which tracks protectionist measures, shows that as many as 17,737 measures have been initiated against Chinese exports. Chinese policymakers realised they needed to do things differently. They started investing heavily in Asia, Africa, and to some extent in Latin America.

This meant four things. First, as the cost of production was lower in Southeast Asia, it meant Chinese firms could gain by shifting their production bases outside China.

Third, Chinese firms could evade protectionist measures targeted at their exports if they started exporting from Southeast Asian countries instead.

Fourth, investing in Africa and Asia has also reduced some of China’s energy requirements, enabling Beijing to access cheaper foreign energy (oil and power) and minerals. Chinese firms have constructed six hydropower plants and one thermal power station in Myanmar. The country has also invested in power transmission and copper processing activities in Vietnam.

In Sri Lanka, Pakistan, and elsewhere in the Middle-East, Africa, and South-East Asia, Chinese money is used to build ports infrastructure. This has helped them to take management control (as is the case with Pakistan’s Gwadar port) and in some cases total ownership of the port like that of Hambantota port in Sri Lanka. Accessing new markets means Chinese GDP will remain afloat, even, in the event of a trade war. 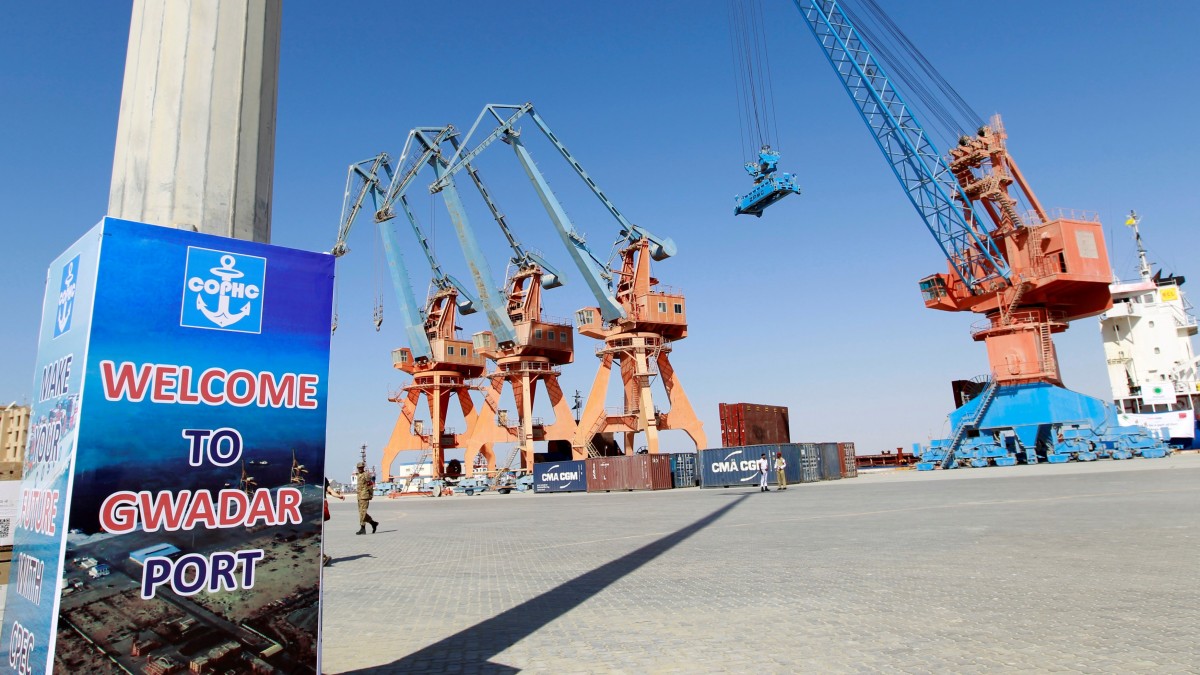 A view of Gwadar port before the inauguration of the China-Pakistan Economic Corridor port in Gwadar, Pakistan, on November 13, 2016. Photo: Reuters/Caren Firouz/File Photo

The US side of the story

Proponents of the US-China trade war will argue imposing tariffs is not a bad idea. Tariffs are merely a transfer payment from one sector of the economy (consumer/producer) to another (the government). The government may use this revenue from additional tariffs and spend it on a sector with a larger multiplier effect on income and employment generation.

Additionally, imposing tariffs is often the right policy measures and may increase global welfare when targeted against foreign subsidies. Take, for instance, the case of US tariffs against Chinese solar panel industry, which possibly could have survived because of higher government subsidy. The Chinese subsidy is distortionary as it allows inefficient Chinese firms to flood the world market. Global prices of solar panels have crashed by over 75%. This has driven out the more-efficient, non-Chinese manufacturers from across the world out of their business.

When importers compete in the domestic market, they may sometimes absorb the impact of tariffs, leading to a higher input price in their own mark up (the difference between price and marginal cost). The consumer may not bear the brunt of tariffs at all. In the present context, the US has imposed tariffs and predominantly targeted the Chinese capital goods and electronic items.

In short, the Chinese dragon is more precisely described today as a bull in a china shop. Hopefully, the US will find newer ways to tame this new animal.