India Ready To Sell BrahMos, but Exports Remain Hostage to Concerns Over CAATSA

Even though the US Act does not have international endorsement, it has the ability to impose arbitrary embargoes and covers the Russian defence entity NPO Mashinostroyenia that forms the joint venture with India’s DRDO. 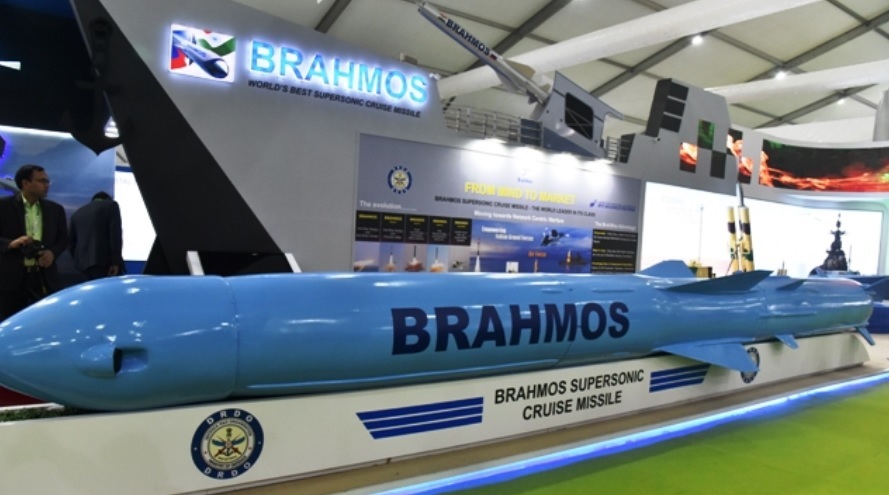 Chandigarh: The ominous shadow of US sanctions on Russian defence entities looms ominously over India’s plans to fast-track the export of BrahMos cruise missiles which are being locally manufactured in collaboration with Moscow.

India is in advanced talks with several countries, especially the Philippines, Vietnam and the United Arab Emirates (UAE), amongst others like Argentina, Brazil, Indonesia and South Africa to sell them the BrahMos missile system. But its export remains hostage to unresolved concerns over the US’s Countering America’s Adversaries Through Sanctions or CAATSA, which has the potential to hobble all such sales via arbitrary embargoes.

Even though CAATSA has neither international nor United Nations endorsement, it was unilaterally approved by the US Congress in 2017 in response to Russia’s annexation of Crimea in 2014, and Moscow’s alleged meddling in the US presidential elections two years later. The Act covers, amongst numerous other sectors, all major Russian defence entities including NPO Mashinostroyenia (NPOM) that forms the joint venture (JV) with India’s government-run Defence Research and Development Organisation (DRDO) to design, upgrade and manufacture BrahMos. The DRDO has a 50.5% stake in BrahMos Aerospace, headquartered in New Delhi, while NPOM owns the remaining 49.5% in the JV.

The two-stage cruise missile with a 292km strike range recently got top billing as the DRDOs and Department of Defence Production’s (DDPs) potentially ‘hot selling’ weapon system. It features prominently in their list of 230 indigenously developed and licence-built military platforms, weapons and other defence systems for possible sale to ‘friendly countries’, like the Philippines and Vietnam to boost India’s materiel exports fivefold to $5 billion by 2025.

But one tangible drawback or hitch, with regard to exporting BrahMos that is series built at a ‘dedicated’ facility in Hyderabad, is its dependence on critical Russian components: the missile systems ramjet engine and radar seekers, both of which are provided by NPOM and hence technically liable to sanctions under CAATSA. Industry officials told The Wire that Russia supplies around 65% of the components for the 3.9 tonne BrahMos, and that both sides had only recently resolved longstanding issues over the missile systems intellectual property rights, rendering it eligible for export. But neither side seems apparently to have factored in CAATSA.

“Enforcing CAATSA on the potential export of BrahMos by the US would be disastrous for the Ministry of Defence’s plans, in addition to adversely impacting other critical aspects of bilateral ties strategic and security between Delhi and Washington,” said Amit Cowshish, former defence ministry acquisitions advisor. Washington’s position on CAATSA needs to be stated unambiguously and not remain in the twilight zone, he declared, adding that if not clarified, the threat of sanctions would continue to hang over India like the proverbial Damocles sword. 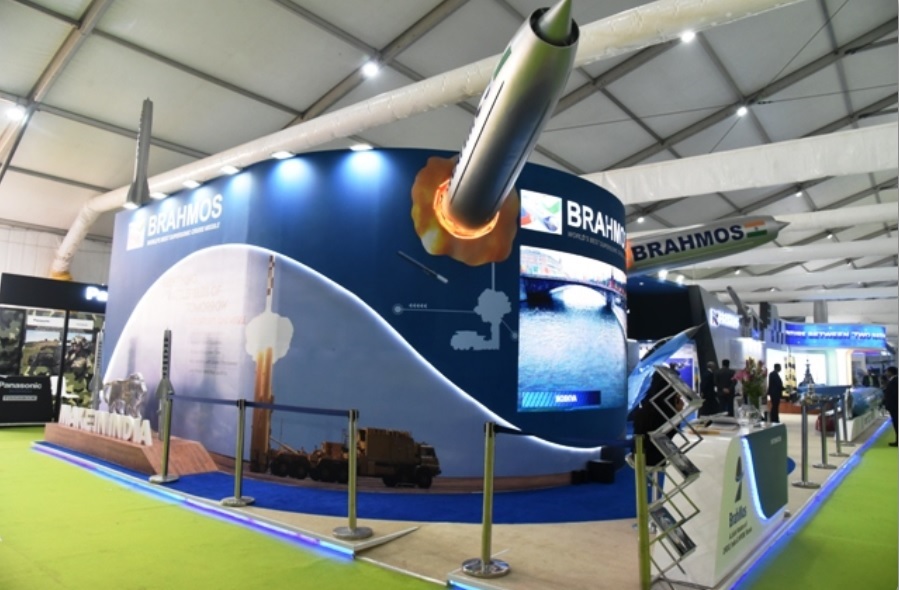 There has not been official discussion or reaction to this possibility in either Delhi or Washington, as CAATSA’s possible invocation by the US remains shrouded at best in ambiguity and opacity. It’s also a concern that keeps India guessing, almost as if Washington’s doublespeak regarding CAATSA is aimed at keeping Delhi deliberately on edge. Some analysts believe that CAATSA, which otherwise has had little or no impact on Russia, is being ‘leveraged’ by Washington to ‘persuade’ India to import additional US materiel like fighters for its air force and navy for over $20 billion.

Over the past decade, India has emerged as one of Washington’s largest arms imports, acquiring assorted platforms like maritime reconnaissance and transport aircraft, attack and heavy-lift helicopters and light-weight howitzers, amongst other materiel worth an estimated $18 billion. Other acquisitions apart from combat aircraft, like armed unmanned aerial systems (UAS) and air defence systems worth another $20 billion are in an advanced state of negotiation.

In recent months, US officials have obliquely warned India against acquiring Russian defence equipment, particularly five Almaz-Antel S-400 Triumf self-propelled surface-to-air (SAM) systems for the Indian Air Force (IAF). To further confound matters, Pentagon and State Department personnel in Washington and the US embassy in Delhi have periodically hinted that CAATSA included a provision for a ‘case-by-case’ waiver, but hastened to add that India had not yet received any such renunciation. This indeed is reminiscent of a popular US comic character’s famous quip: “Now I see it, now you don’t”, leaving the entire CAATSA issue unresolved.

Also Read: Will They or Won’t They? US Leaves Issue of Sanctions on India Under CAATSA Open-Ended

So far, the US has invoked CAATSA against China and Turkey for acquiring two S-400 systems each, but sanctions against India could be forthcoming, as delivery of similar air defence systems to the IAF are scheduled to begin around end-2021. In the meantime, there also remains the possibility of the US sanctioning not only BrahMos’s export, but a host of other Russian military platforms and defence equipment that India has acquired recently and whose delivery is imminent. These include frigates, combat aircraft, assault rifles and even the lease of a nuclear-powered attack submarine (SSN), in addition to assorted missiles and ammunition.

Meanwhile, earlier this week the Philippine’s defence secretary Delfin Lorenzana, was quoted by local news agencies as saying that his country was buying BrahMos missiles. He made the announcement after witnessing the inking of the ‘implementing agreement’ by Raymundo Elefante, undersecretary in the Philippine Department of Defence (DND) and Shambu S. Kumaran, India’s envoy in Manila.

Lorenzana did not provide details but indicated that this ‘implementing arrangement’ would serve as a roadmap in support of the planned BrahMos acquisition by the Philippines, and as “legal framework” for the weapon system that was potentially being executed via a government-to-government deal between Delhi and Manila.

But UK’s Jane’s Defence Weekly reported on March 3 that while the BrahMos procurement had been prioritised by the Philippines Armed Forces ‘second horizon’ modernisation programme, the country’s DND has been ‘wary of the (BrahMos) purchase for fear of incurring penalties under CAATSA which seeks possible penalties on Russian defence customers’.

For Manila, acquiring the BrahMos missile system is a priority in light of growing concerns over Chinese assertiveness in its territorial waters. In December 2019, Indian and Philippine officials had determined that Manila would procure two BrahMos batteries or six mobile autonomous launchers, with two or three missile tubes each. At the time, both sides had planned on concluding the deal in 2020, but this was delayed due to the outbreak of the COVID-19 pandemic.

After sale logistics to induct BrahMos and instruct the Philippines Army’s first Land Based Missile System Battery (LBMSB), raised in October 2019 to activate, maintain, and operate the cruise missile too were discussed. Indian industry sources said that though India had offered a $100 million line of credit to the Philippines to fund the BrahMos and other indigenous materiel purchases, Manila was ‘exploring’ the possibility of making the buys with its own resources which, however, was proving somewhat demanding.

Delhi has recently reinforced diplomatic and strategic ties with the Philippines. During his Manila visit in October 2019, Indian President Ram Nath Kovil pledged to boost bilateral defence and maritime relations between their two countries, nervous over China’s growing hegemony. Some two years earlier, Narendra Modi became the first Indian prime minister in 36 years to visit the Philippines in November 2017, where he too signed several agreements to strengthen defence and security ties following talks with Philippines President Rodrigo Duterte. 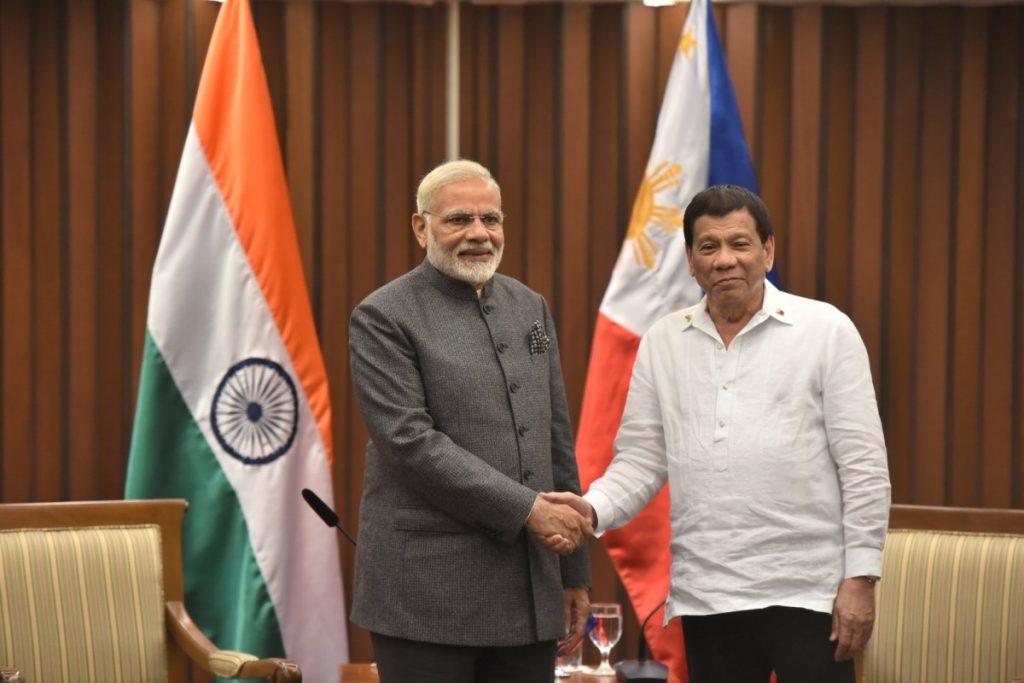 And while the Philippines believes that BrahMos will strengthen its ability to deter China in disputed waters, India too hopes to gain strategically by arming a country seeking to oppose Beijing, by countering the People’s Liberation Army Navy (PLAN) assertiveness in the South China Sea and surrounding waters. India had also been in dialogue with neighbouring Vietnam since 2014 to also supply it the BrahMos, but faintheartedness on Delhi’s part and fear of Beijing’s reaction, had interminably delayed it. However, even for sale of the missile system to Vietnam or any other country, apprehensions of CAATSA’s application persist.

Named jointly after the Brahmaputra and Moskva rivers, BrahMos was first successfully tested in India in 2001. Configured on the Russian anti-ship 3M55 Oniks/Yakhont system (NATO designation SS-NZX-26), BrahMos is designed for launch from land-based mobile platforms, ships, combat aircraft and also submarines. For over a decade it has been in use with the Indian Army and frontline Indian Navy (IN) warships and more recently was mated with the IAF’s Sukhoi Su-30MKI multi-role fighters. BrahMos’ submarine-launched versions are presently undergoing trials.

The DRDO is also working on extending BrahMos’ range from 400km to 500km. “We have already confirmed (a range of) 400km and in order to increase it to 500 km it is needed to increase speed”, declared Alexander B. Maksichev co-director with the BrahMos JV in April 2019. Currently, the missile flies at a speed of Mach 2.8, but through modernisation, it will achieve the hyper sound speed of 4.5M, he added.

Other official sources said the proposed Extended Range (ER) BrahMos variant has been fitted with a Russian-designed seeker and would also be capable of being employed from land and sea-based platforms to strike ranges of nearly 500 km. The ER version is expected to carry the same amount of fuel as the earlier versions but will be fitted with an enhanced computer-controlled injector system to better regulate this supply into its engines’ combustor, greatly improving efficiency.

This ER BrahMos development became possible after India formally joined the multinational Missile Technology Control Regime (MTCR) in mid-2016, permitting it to co-develop missile systems with ranges of more than 300 km in collaboration with another country. MTCR restrictions had earlier prevented Russia from transferring critical systems to India to extend BrahMos’ 292 km range and 500 kg payload, rendering it one of the world’s fastest and most effective cruise missiles which meets many countries purse and requirements – CAATSA permitting.