A look at the trade composition reveals that India is primarily exporting low-value raw materials and importing high-value manufactured goods from China. And this reliance does not seem likely to go away anytime soon. 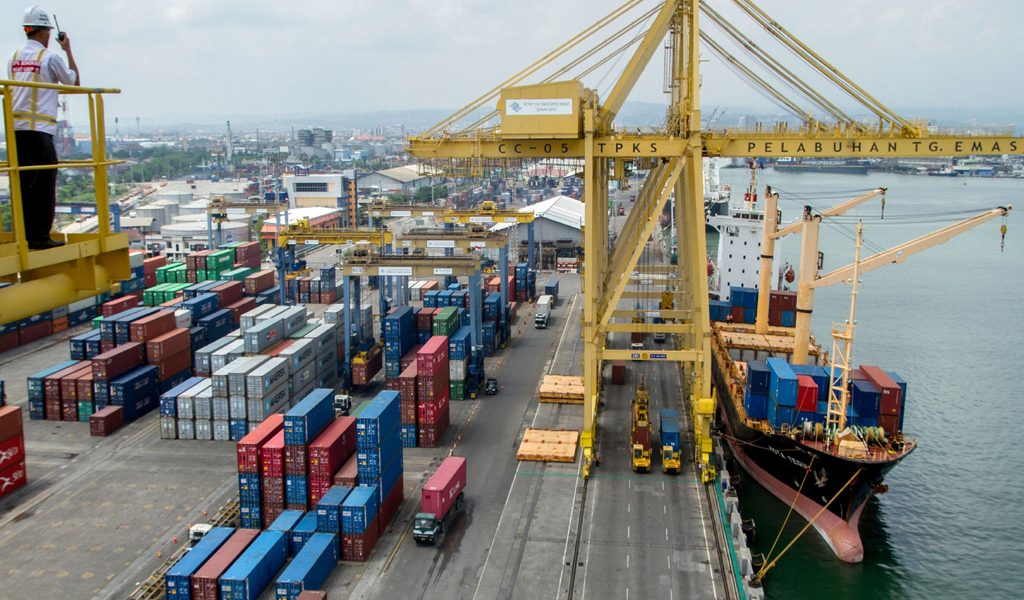 At the onset of the COVID-19 crisis, India’s external sector was already in a critical condition. The pandemic further resulted in an immediate and substantial impact on international trade. While India’s overall trade flows were consistently declining since 2018-19, the plunge severed further in 2020-21.

Registering a decline of 19%, India’s total trade dipped from $844 billion in 2018-19 to $685 billion in 2020-21. It is no surprise that the pandemic has disrupted trade trends for the country, but an emerging trend can be seen is in the economic relationship between India and China.

Also read: After Three Decades of Market Reforms, Where Does India Stand Compared With Bangladesh and China?

Trade data suggests that China’s share in exports has increased from 5.08% in 2018-19 to 7.28% in 2020-21 (See Figure 1). On the imports side, the share of China has increased from 13.68% to 16.57% over the same period. These emerging trends indicate that India has developed a significant amount of dependence on trade with China. 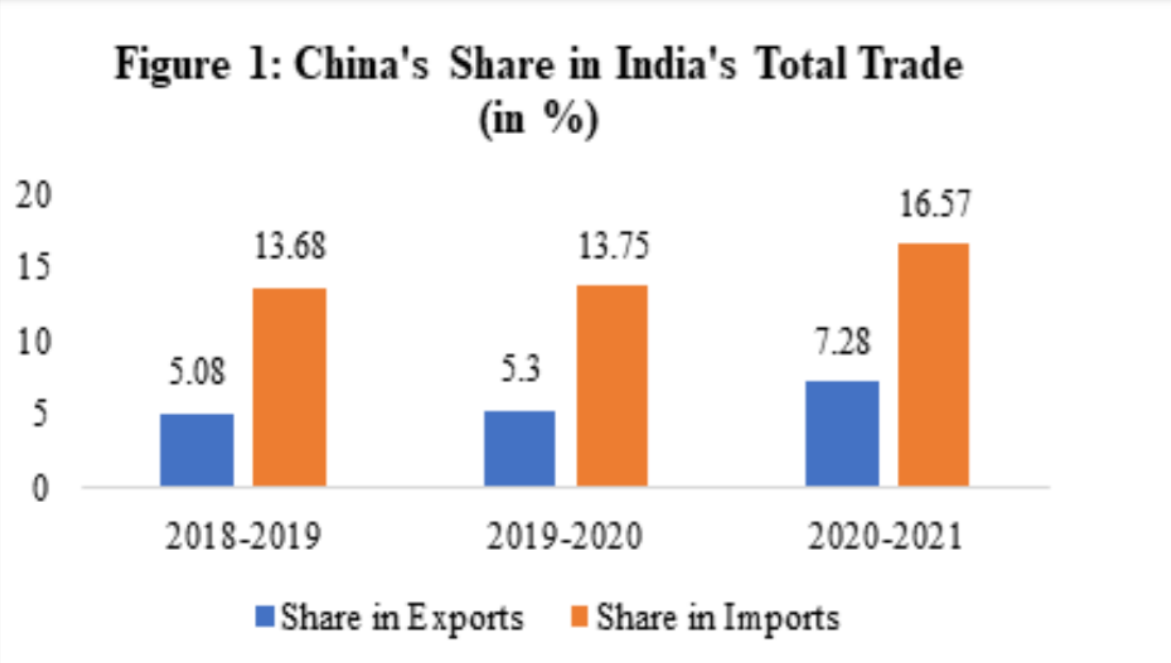 In 2020-21, China also replaced the US to become India’s largest trading partner (See Table 1). The two-way trade between India and China stood at $86.39 billion, higher than India’s trade with the US which was valued at $80.49 billion.

In the last four years, India’s trade with China has averaged around $86.3 billion, with imports exceeding exports resulting in a trade deficit (See Figure 2). While India has taken several steps to bridge the deficit, even though narrower than before, a substantial deficit still exists. In 2020-21, India registered a trade deficit of $44 billion. 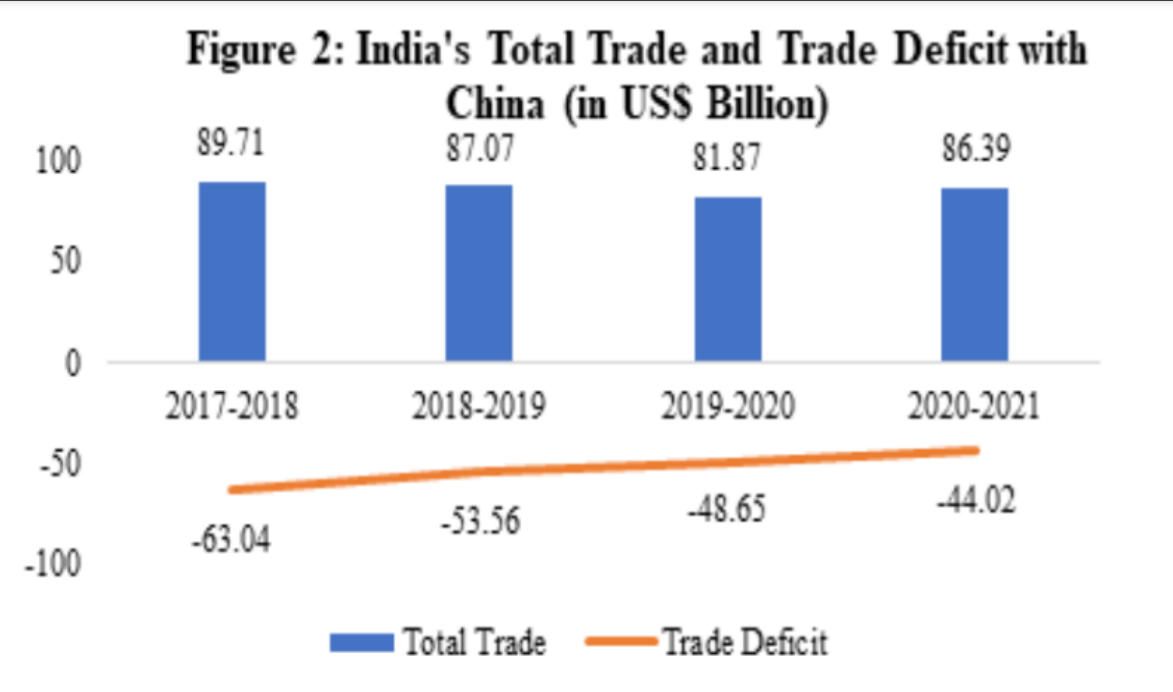 A closer look at the composition of trade reveals that India is primarily exporting low-value raw materials and importing high-value manufactured goods from China. In 2020-21, India’s top ten exports to China at the HS-6 classification of traded items included iron ores and concentrates, cotton, light oils and preparations, shrimps and prawns, fruits of the genus capsicum or of the genus pimenta, parts of telephone sets, telephones for cellular networks, semi-finished products of iron, castor oil and its fractions, and granite (See Table 2). The top ten exports accounted for nearly 40% of India’s total exports to China.

The findings of growing import dependence on China, resulting in the widening of trade deficit warrants a deeper investigation of the difference between policy and practice.

Last year, the government announced a Rs 20 lakh crore economic package under the ‘Atmanirbhar Bharat Abhiyan’ in pursuit of the country to become self-reliant, focussing more on expanding its manufacturing capacity and becoming an epicentre of the global supply chains. Negating all implications targeted towards import protectionism, the scheme is in fact being projected to promote export and increase integration into supply chains.

Our findings from analysis of the trade data suggest heavy reliance of domestic industry on imports from China, which does not seem to wither away anytime soon. To bridge the trade deficit with China and to achieve the vision of a self-reliant India, the country is in dire need of undertaking structural reforms. These reforms ought to focus on building the kind of infrastructure and technological expertise that is required to make the country globally competitive.

We already have the success story of some sectors to build on, such as automobile industry, pharmaceuticals, vaccine manufacturing among others. Having said that, it is also important to capitalise on the traditional labour-intensive sectors such as textiles where we have intrinsic comparative advantage. While India’s long-term vision should be to eventually move away from low-skill, low-value exports to high-value high-skill technology and capital-intensive products, the growth potential of labour-intensive low-skill industries should not be ignored in this process.

To conclude, the design and approach of the ‘Atmanirbhar Bharat Abhiyan’ scheme needs to be reviewed keeping in mind the emerging trade data trends and domestic economy requirements.

Samridhi Bimal is an independent consultant. Views expressed are personal.