Cancelled Orders, Missed Exhibitions: J&K's Handicrafts Industry Is in Its Worst Ever Phase

With no internet, the industry's connection with its biggest customer base - the foreign market - has been gone for nearly four months. 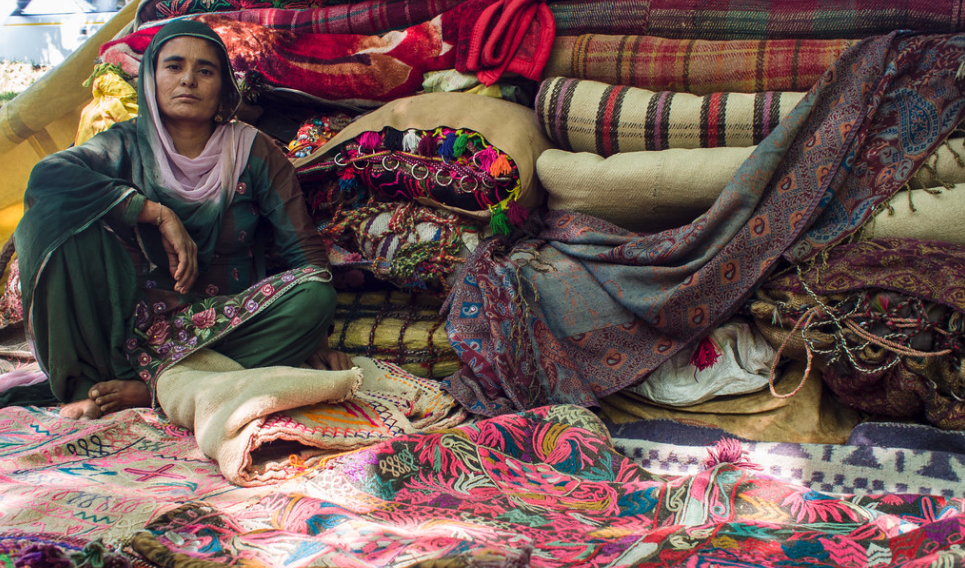 Srinagar: Nearly 120 days of internet shutdown and over two months of a communication blockade since August 5 following the reading down of the special status of Jammu and Kashmir and the bifurcation of the state into two Union Territories has come as a death blow for the already distressed handicrafts industry in Kashmir, leaving about 50,000 weavers, craftsmen, manufacturers and handicraft exporters without a means of livelihood.

According to handicrafts exporters, the months of August, September and October are peak business months during which handicraft items are exported to domestic and international markets. Deliveries to foreign countries, of handicraft items like shawls, carpets, chain-stitch shrugs and papier-mâché items for Christmas take place in August and September. But since there was a total communication blockade and internet shutdown from August 5, online orders were not received. Neither manufacturers, nor weavers could thus do business in the past three months.

“The handicrafts trade suffered about 90% losses this year,” said Ali Muhammad Shirazi, a noted handicraft exporter from the valley. “There was a loss of about Rs 400 crores because there was negligible export of handicrafts due to the communication shutdown,” he added.

Shirazi said the handicrafts industry was once a Rs 4,000 crore one and the second largest contributor to the economy of the erstwhile state after the agriculture sector. However, over the years, the implementation of GST, other taxes, and the global economic meltdown has had an adverse impact on it.

Under the previous tax regimes, most handicrafts industries in India were largely exempt from taxes. However, after the implementation of GST, various raw and finished components were taxed from 5% to 18% under the new tax regime.

“The handicrafts sector has already been in distress for the past few years. But the August 5 communication shutdown and especially the internet shutdown has come as a big blow for the handicrafts industry in Kashmir,” said Shirazi, who is the only exporter in Jammu and Kashmir associated with the World Fair Trade Organisation, and who exports handicraft products to several foreign countries.

“After August 5, we lost contact with all our clients abroad and hundreds of orders were either cancelled or could not be processed,” he said.

Ghulam Mohiuddin Khan, the president of the Chamber of Commerce and Industries Kashmir (CCIK), who is also associated with the handicrafts industry, said they missed three foreign exhibitions in August and September as they were unable to register for stalls online.

“It was a big loss for handicrafts manufacturers and exporters. Due to the internet shutdown, we couldn’t take orders online and weavers and manufacturers couldn’t make anything, which also affected their livelihood,” said Khan. A family shops for wicker handicrafts before the shutdown, in Srinagar. Photo: Mike Prince/Flickr (CC BY 2.0)

Khan estimates a loss of about Rs 1,000 crores to the industry since August 5.

“We could not even communicate with our buyers in India and foreign countries, which is the main market of handicraft items. We were unable to take their orders online in the peak season due to internet shutdown. We couldn’t even send photographs of sample products over email or WhatsApp to customers and prospective buyers outside the state,” he said.

Khan said tourism had started to pick up in the summer, right before August. But the travel advisories issued by the government shortly afterwards also hit the handicrafts sector as all tourists left the valley.

“There were a lot of tourists, including foreign ones who were visiting the valley till August. They would also buy handicraft items from stalls and showrooms in popular tourist spots like Gulmarg, Sonamarg, and Pahalgam,” said Khan.

Sheikh Aashiq, the president of Kashmir Chamber of Commerce and Industry (KCCI) said the handicrafts industry, especially the carpet industry, is a 100% export-oriented industry.

Also read: Loss to Farmers in Kashmir Could Be More Than Rs 7,000 Crore: Farmers Body

“All our exporters and manufacturers were unable to do business after August 5. Due to the continued internet shutdown, they were unable to take orders from domestic markets and from foreign countries. As a result, about 50,000 artisans, weavers and manufacturers were left without work and means of their livelihood in the past three months,” said Aashiq.

Aashiq said there has been zero production of handicraft items since August due to the lack of domestic and international buyers.

“Also the main season of business from August onward has ended now,” said Aashiq, adding that the carpet industry has suffered its worst ever hit.

The carpet industry was earlier under a 0% VAT regime, but the industry came under a 12-18% tax under GST.

“Since the authorities shut down all internet services, exporters and other traders couldn’t even communicate with their customers and buyers. causing a loss of about 50% in exports,” he said.

Ashiq said the handicrafts industry can also suffer long-term losses as foreign buyers have lost trust due to cancellations of their orders and the months of delay in getting their items.

“This was an unorganised sector employing and engaging a sizeable population in the valley. Womenfolk would earn a respectable livelihood from their homes by weaving carpets and making other handicraft items,” said Ashiq. “By suddenly disengaging them from their work, unemployment is going to increase which will create a bigger burden for the state.”