Why Are We Going Over the Moon on ISRO and Helium-3 All Over Again?

If we're going to get excited about ISRO mining the moon for He-3, a fuel that could be used for nuclear fusion, it may be prudent to first produce surplus power from fusionable isotopes – a breakthrough that is still years away. 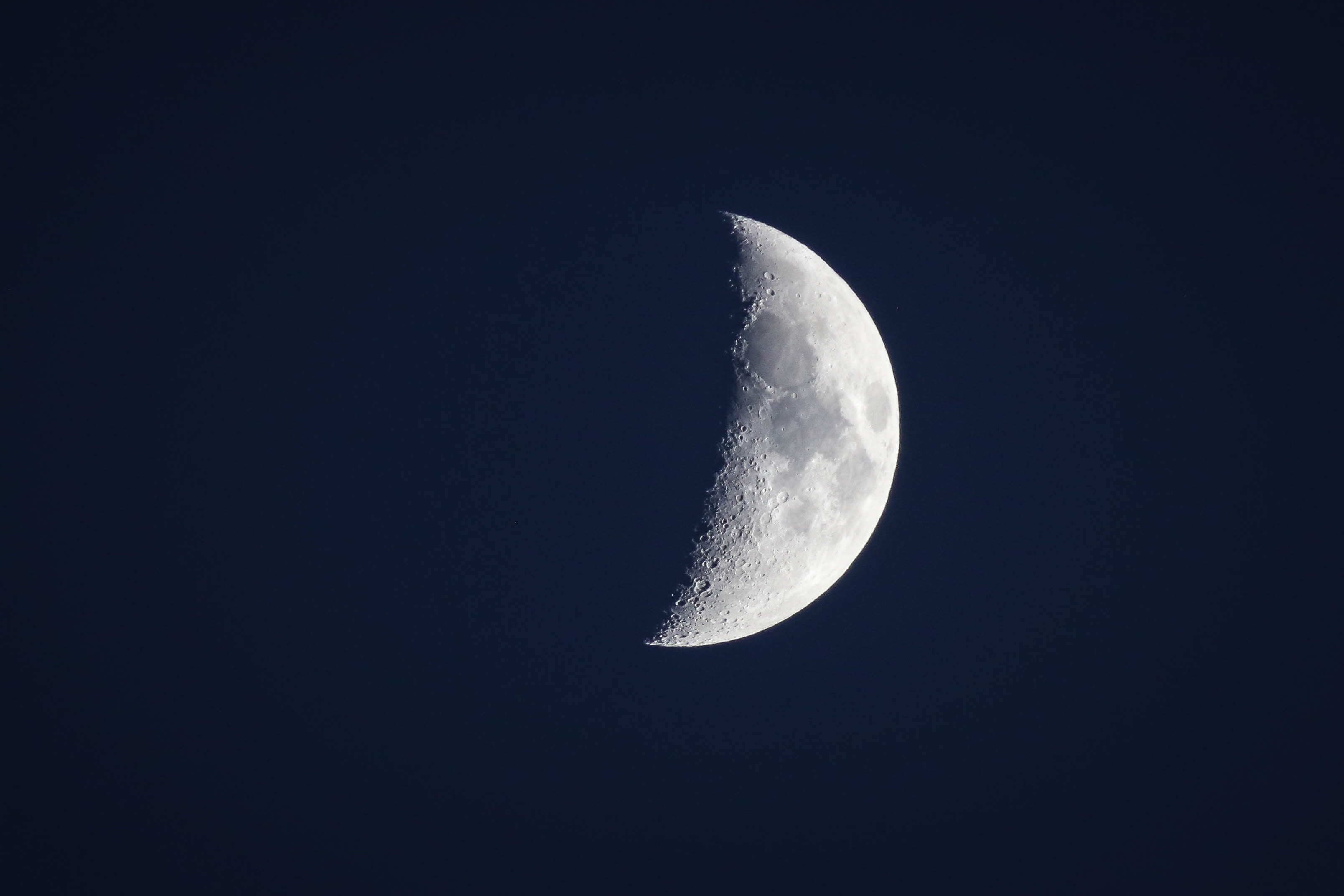 On July 18, Jitendra Singh, the minister of state (independent charge) for the Department of Space, reaffirmed in the Lok Sabha that the Chandrayaan 2 mission of the Indian Space Research Organisation is not going to mine our natural satellite for helium-3, stating that considerations about the isotope were “outside the scope of the current Moon mission”. He was responding to questions posed by Poonam Mahajan. In light of this confirmation, the following article – first published on June 28 – is being republished.

There has been a surge of ‘news reports’ on various platforms, including Hindustan Times, Financial Express, Deccan Chronicle and the Times of India, talking about the Indian Space Research Organisation’s plans to mine the moon for helium-3 (He-3). It’s unbelievable how quickly we’re having this ‘debate’ again: we don’t know how to use He-3 as a source of energy, a claim that all the reports are using to justify their talking about it. Apparently this isotope can be used in nuclear fusion reactors – conveniently forgetting we’re over a decade away from successfully fusing the lightest fusionable isotopes in an energy-surplus reaction.

All the reports also appear to be rooted in one published by Bloomberg Quint (BQ), which quotes K. Sivan, ISRO chairman, as saying, “The countries which have the capacity to bring that source from the moon to Earth will dictate the process. I don’t want to be just a part of them, I want to lead them.”

Laudable attitude but we are getting carried away here. The idea of mining helium on the moon has been discussed by NASA and the European Space Agency but with far less noise. The BQ report made it okay to talk about He-3 again after the fiasco in April last year, when a slew of reports misquoted a former ISRO scientist to create an unnecessary news cycle, by doing the following: discussing the potential of He-3 fusion to power the world for “250 years”; tying in the responsibilities of the senior-most official of the Indian space programme with an emotional aspiration; and acknowledging that the necessary tech doesn’t yet exist.

This is what climate change reporters would call false balance: giving readers the impression that the article is ‘balanced’ because it makes room for voices from all sides, without stopping to ask whether some of these voices are actually making sense. The moon contains a substance that we think we know how to use – and we are letting this belief bias our decision-making. The moon and multiple near-Earth objects contain lots of materials found much less abundantly on Earth; why are we not hankering after those? Is it only because we don’t yet have reasonable theories at hand about how to exploit them?

ISRO has an impending moon mission, in October/November this year, over the course of which the organisation hopes to deploy its first rover on the lunar surface. So it feels like we’re paying He-3 attention because a) it hasn’t yet been exploited by Earth-based organisations and b) millions of Indians long for ISRO to lead the world one way or another. If we were mere months away from launching a mission to Venus, perhaps we would be seeing a lot of reports about extracting energy from that part of the Solar System.

Even if the project is improbable, could public interest in He-3 mining and fusion at least boost ISRO’s budgetary prospects? It can’t, for three reasons:

1. He-3 fusion is untested technology. Considering prevailing commitments like the Paris Agreement, it would simply be foolish for India to attempt stewarding a nuclear fusion programme involving heavier isotopes when a prototype hydrogen fusion experiment (ITER) itself has sucked in over Rs 96,550 crore (about 9% of which India contributes) while another billion-dollar facility in the US has been struggling to kickstart fusion chain reactions for over four years now.

2. ISRO needs the money for other things (self-explanatory)

3. It’s not why we’re going to the moon – at least, it should not be the reason we’re going to the moon: to extract a ‘fuel’ we we have some ideas about. Instead, the Chandrayaan 2 mission has other, more decidedly laudable, goals and we shouldn’t be worming our way out of trying to understand them and and the nuanced value they promise instead. 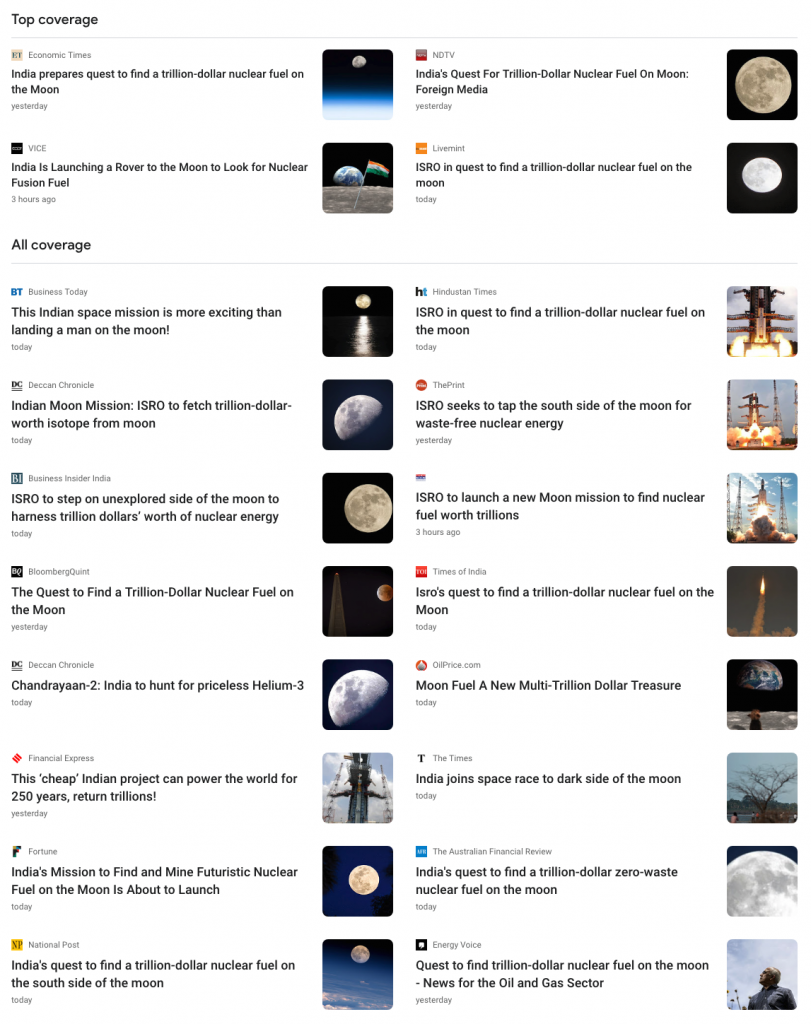 A snapshot of publications that carried reports about ISRO planning to mine the moon for He-3. Source: Google News

It’s important to get our reasons right for doing anything, especially when crores of rupees are involved, because they are proxies for the things that people value, which in turn influence policymaking, governance and ultimately the allocation of funds. On the flip side, if this is the kind of messaging that ISRO, and the government behind it, is looking for, then arm yourself with facts and don’t call the mission scientific or judge it for its scientific or technological value.

Additionally, hoping that “the more we talk about new-fangled technologies, the more we will remove it from the realm of abstraction and the closer we will come to realising it” is illogical. While it is good to dream big, drawing upon fashionable ideas from the pages of golden-age science fiction, it is also important to keep our feet on the ground. India has a substantial natural reserve of thorium; that does not mean thorium-fuelled reactors are ready to power the country for hundreds of years.

In the case of He-3 fusion, even technological feasibility, leave alone readiness, is not at hand; it is somewhat like talking about building advanced heavy-water reactors in the early 1930s, after the neutron was discovered but before the Chicago Pile went critical, and with a world war set to change everything – the way climate change is poised to do for our generation. It is not prescience or early adoption as much as speculation and spitballing. It would pay to be more conservative in our choice of goals to pursue if only because, in the short to medium terms, ISRO is neither equipped nor empowered to incentivise blue-sky thinking. This can be further broken down in two ways:

1. Its funds are not allocated for decades at a time, which means the trajectories of its major projects have to be Bayesian – each mission immediately following its predecessor – and often incremental.

2. ISRO is an essentially civilian organisation, which means its goals go hand in hand with strategic and diplomatic advantages sought by the government and from which the organisation can barely deviate.

It is entirely possible that, following this line of sight, He-3 fusion will be in India’s crosshairs as a feasible nuclear fuel in the distant future – but not before that. Supporting technologies whose development and implementation we have a realistic chance of guiding is also what makes us more able to predict the future, and gives us more control over determining long-term research goals and policy directions. In short: if we’re to be heard, we need to make sense. He-3 fusion doesn’t yet make sense, especially in a world that doesn’t have H-2 fusion, and it would be perilous for ISRO to pursue it as if it were because such a choice would come at the cost of various other endeavours there is a demonstrated need to become better at.

Of course, it seems likely that deuterium/tritium fusion will be achieved before the close of this century but that alone wouldn’t open the gate for the entire world to be powered for two or three centuries by a single, non-renewable fuel – and ISRO or any other organisation would do well to not pick something as incredible as that to prove a point about ability and leadership. Dare I mention the India-based Neutrino Observatory?