Under Enormous Pressure, a New Superconductor Star Is Born

When subject to a force of 1.6 million atmospheres, lanthanum hydride becomes a superconductor at just 23º C below zero – the highest such (uncontroversial) temperature achieved thus far.

A magnet levitates above a superconductor, in a demonstration of the Meissner effect. Credit: Mai-Linh Doan/Wikimedia Commons, CC BY-SA 3.0

Vasudevan Mukunth
The Sciences
25/May/2019

In 2018, two research groups led by scientists from the US and Germany independently found that when the compound lanthanum hydride is subjected to extreme pressures and somewhat low temperatures, it becomes a superconductor. It was an important discovery.

The American-led group reported that this happens at -15º C under 190 gigapascal (GPa) of pressure. The other group, led by Mikhail Eremets, an experimentalist at the Max Planck Institute for Chemistry, Mainz, showed that this happened in their sample at 150 GPa and -58.15º C.

In 2014, Eremets had led another effort to show that sulphur hydride becomes superconducting under a pressure of 90 GPa and at a temperature of -70.5º C.

These discoveries seem quixotic but only at first glance. They are all important milestones in scientists’ quest to discover a true room-temperature superconductor, a material that can conduct electricity without any resistance in ambient conditions, with potential applications ranging from high-efficiency power transmission to quantum computing.

Also read: Why so Many Twists and Turns in the Ongoing IISc Superconductivity Saga?

More importantly, it would conclude a monumental quest that condensed-matter physicists have undertaken since 1911 that has drawn  upon advancements in quantum mechanics, materials science, electrical engineering and high-speed computing.

On May 22, Eremets’s group reported yet another discovery via a peer-reviewed paper in Nature, this one even better than the last: that lanthanum hydride becomes superconducting at only -23.15º C under 170 GPa, or 1.6 million atmospheres, of pressure.

That is, this is the closest any superconductor has to come functioning as such at room temperature, taken to be 0º C, although the pressure at which it enters this state gives pause. Nonetheless, the finding signals, first, that the set of hydrogen-rich compounds like sulphur hydride and lanthanum hydride is likely to provide a candidate for a room-temperature superconductor in the future.

Second: Eremets et al have reminded scientists that they can predict which compounds can be superconductors in what conditions with some accuracy.

Some have heralded the latter as a bigger victory. In the history of condensed-matter physics, scientists often discovered new superconductors in a way they knew would yield one but without being able to say why. The popular BCS theory of superconductivity can explain the phenomenon at the microscopic level but it can’t predict which materials would be superconductors under certain physical conditions.

However, hydrogen-rich compounds are thought to be able to yield many room-temperature superconductor candidates because of the work of Neil Ashcroft and Vitaly Ginzburg in the late 1960s. They hypothesised that the lower an element’s mass number, the higher its critical temperature is likely to be in the right conditions.

Hydrogen has the lowest mass number of all elements. So in their 2014 experiment, Eremets et al compressed hydrogen sulphide (H2S) under 90 GPa, when it transformed to sulphur hydride (H3S), which behaves like a metallic superconductor at -70.5º C or lower.

Calculations based on density functional theory (DFT) indicate these hydrogen-rich compounds have a specific structure: of a cage of hydrogen atoms that enclose a metal atom at the centre. Based on these results, the Eremets group’s paper last year had said that the critical temperatures of the lanthanum and yttrium hydrides could approach room temperature.

Also read: Under a Microscope, a Bizarre Electronic Dance Comes Into Better Focus

With lanthanum hydride, Eremets and his colleagues first determined the conditions at which the compound could become superconducting, including the expected critical temperature (around -33º C). They did this by studying previous results from other tests, by using DFT and also by drawing from calculations by other researchers in 2014. Then they set out to recreate these conditions in the lab to achieve their results.

James J. Hamlin, a physicist at the University of Florida, Gainesville, wrote in Nature, “These remarkable successes for theory seem to be driven by innovative computational methods that were enabled by advances in computing power.”

T.V. Ramakrishnan, a celebrated expert on superconductivity who works at the Indian Institute of Science, Bengaluru, agreed that “it is a significant discovery” and with the need for high-accuracy calculations, but he was more cautious about the hype.

“I am not so sure about the claim that this is the first time scientists are guided by theory in the discovery of new superconductors,” he told The Wire. “It is right in the specific sense that a DFT calculation has suggested superconductivity in this material under pressure at 250 K or so, but I like to think that this broad line of using hydrogen-containing solids to look for superconductivity is perhaps as old as the work of Ashcroft in the 1970s.” 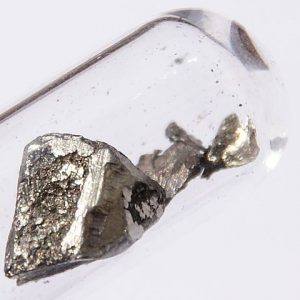 Eremets et al write in their new paper that “the first lanthanum superhydride was synthesised only recently” and that X-ray studies showed it had the chemical formula LaH10: one lanthanum atom for 10 hydrogen atoms.

They noted that in another study, the one published by the other group in 2018, the resistance of lanthanum that had been heated with ammonia borane under 160 GPa plummeted at 260 K when it was cooled and again at around 248 K when it was reheated. This study also suggested that lanthanum hydride’s critical temperature would continue to rise under increasing pressure.

For their current experiment, the researchers first produced “a series of lanthanum hydrides with various compositions” and subjected them to different pressures using a device called a diamond anvil cell. This is the same setup they had used in their hydrogen sulphide experiments. As The Wire reported in 2015:

In their experiment, [they] packed a cold mass of hydrogen sulphide against a stainless steel gasket using some insulating material like teflon, and then sandwiched the pellet between two diamond anvils that pressurised it. The diameter of the entire apparatus was a little more than a 100 micrometers across.

Their results also deviated from the American study on one count. Lanthanum hydride’s critical temperature didn’t increase with increasing pressure but instead followed a dome-like pattern: it peaked at around -23.15º C before decreasing “abruptly” at higher pressures. This indicated that they were likely to have found lanthanum hydride’s highest critical temperature.

But a bigger challenge awaited them, and still does. There are many ways to check if a material has become superconducting, but one of them – called the the Meissner effect – is the most conclusive. When immersed in a magnetic field, the superconducting material should expel the field from within itself to its surface.

However, this is very difficult when you’re talking about analysing something as big as a thin strand of human hair is wide sandwiched between two relatively large diamonds. So a physical probe can’t reach the sample to make direct measurements, and researchers must make do with electrical wires already embedded in the casing structure.

They ran into this challenge in their sulphur hydride experiment as well, and it took them a year to figure out a way to observe the Meissner effect in the sample.

In the meantime, they were able to perform some other tests that indicated that the pressurised lanthanum hydride had become a superconductor at -23.15º C. For example, they showed that when they applied a strong external magnetic field, the material’s critical temperature fell by ~10º C – a feature of the so-called type-II superconductors.

Second, they showed that when they switched the hydrogen in the compound with its heavier isotope deuterium, the critical temperature dropped to -93.15º C – as Ashcroft and Ginzburg’s work had predicted.

All together, this has been a significant achievement, as Ramakrishnan attested, but the journey isn’t complete. These materials still need to cross the last mile of being superconductors at ambient pressure. As Eremets acknowledged to The Telegraph, “The future challenge is to synthesise good materials that can display superconductivity at such temperatures but without such extreme pressures.”

“I think that the authors of the experimental paper must have thought hard about it,” Ramakrishnan said. “It could be that at ambient pressure, the [critical temperature] becomes too low or it does not superconduct at all or that the thing is not stable at least in the needed crystalline form.”

Akin to this issue of high pressure, most other superconductors that we know of have a last-mile problem in the form of temperature. Specifically, their critical temperatures are often so low that their practical application is limited by the need for heavy-duty cooling equipment.

“I believe”, as Ramakrishnan concluded, “that the road” to room-temperature and room-pressure superconductivity “is going to be long and hard.”