Under a Microscope, a Bizarre Electronic Dance Comes Into Better Focus

In some superconductors, the material's resistivity briefly jumps by a few hundred times before dropping by an octillion. 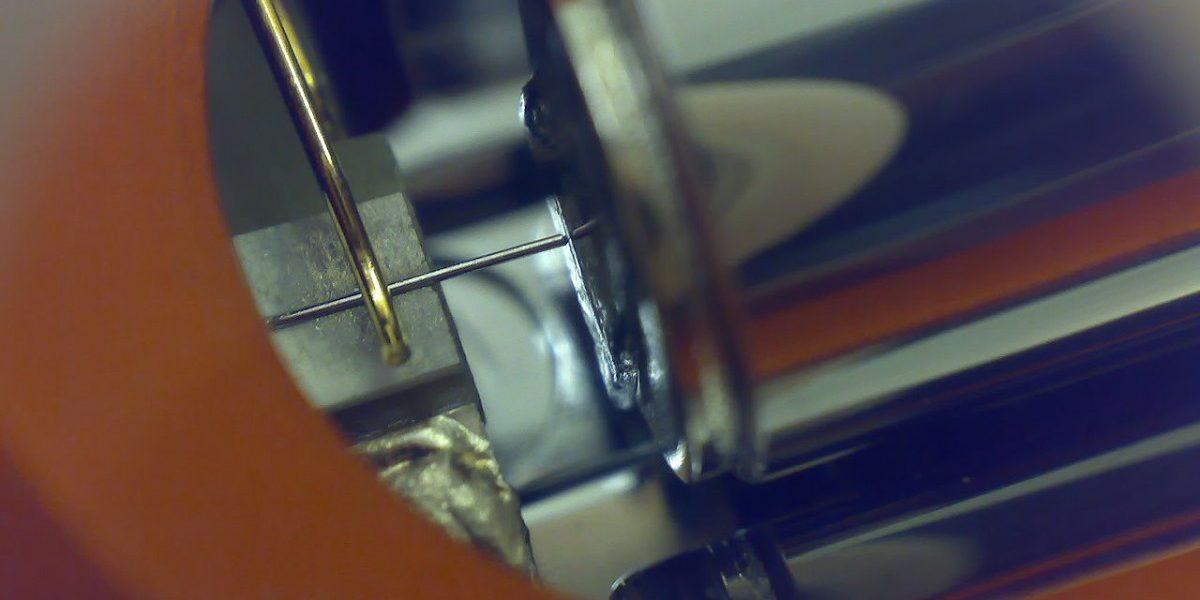 The dominant theory of superconductors is called BCS theory. The letters stand for its creators, John Bardeen, Leon Cooper and John Schrieffer. It was the first microscopic theory of superconductivity and could explain the electrical properties of elements like aluminium, mercury and vanadium at ultra-low temperatures.

It is predicated on entities called Cooper pairs: pairs of electrons inside the superconductor that team up to behave in a way they don’t when they’re unpaired, like in a metal.

When free electrons move around a metal, their motion is scattered by various disturbances in their path, including atomic nuclei. This gives rise to electrical resistance. According to BCS theory, the atomic latticework in some materials contains vibrations in the lattice that – below a threshold temperature – compel electrons to overcome their charge repulsion and pair up. In this state, the electrons are harder to scatter and move more easily through the material. This manifests as zero resistance – a.k.a. the superconducting state.

Also read: The Graceful, and Graceless, Pursuits of Peace in the Quantum World

BCS theory scored because – given only the critical temperature – it could explain almost all experimental data in the superconducting phase. In fact, BCS theory was exceptionally successful this way.

In turn, this allowed physicists to create new superconducting materials simply by engineering their electronic structure to produce Cooper pairs at low temperatures. Such materials have been discovered as recently as 2001 (magnesium diboride) and 2015 (hydrogen sulphide).

Moreover, some superconductors also a display a variety of other effects that BCS theory hasn’t been able to explain.

One such effect is charge-ordering. It is known to occur in various materials regardless of whether they are superconductors. But it does occur in some superconductors as well and for reasons we don’t fully understand.

When materials such as manganites are cooled close to their respective threshold temperature, they enter a weird state just before they become superconducting. In this state, their electric charge becomes disaggregated inside the body of the material in specific patterns: as horizontal or vertical stripes, or in a chequerboard design.

In this charge-ordered phase, the material’s electrical resistivity increases by a few hundred times – before plummeting to less than 0.0000000000000000000000001 ohm/cm at the threshold temperature.

Physicists don’t expect BCS theory to be able to explain this bizarre occurrence, and it hasn’t yet either.

One way or another, we don’t know why charge-ordering happens. We also don’t know why it happens so close to the superconducting phase in some materials.

According to scientists, understanding charge-ordering in cuprates is a quest to identify which of the following could be true:

1. Charge-ordering and superconductivity are unrelated phenomena, and simultaneous observation is coincidental;

2. Charge-ordering occurs due to some microscopic interactions, and once it does, it drives the formation of Cooper pairs;

3. Superconductivity occurs first due to some microscopic interactions, and this then drives the system towards charge-ordering;

One idea is that the density of Cooper pairs inside the material could be non-uniform, with more pairs found in some regions and fewer in others, giving rise to a correspondingly ordered distribution of electric charge.

A new study uses scanning tunnelling microscopy (STM) to check if this could be true. That physicists can use STM to make this check without other material properties interfering with observations has been proposed before – such as by Shou-Cheng Zhang and co. in a 2004 paper.

(Shou-Cheng Zhang passed away on December 1. He was among the first physicists to “predict that the phenomenon of topology could lead to exotic states of matter” [source] – work on which won other scientists the 2016 Nobel Prize for physics.)

Also read: Scientists Shouldn’t Always Look for Utility in the Beauty of Shapes

In 2008, a group of physicists used an advanced form of STM to find that the charge-ordering phase in a cuprate compound called bismuth 2212 (Bi2Sr2CaCu2O8+x) was accompanied by the presence of a charge-density wave inside the material. You could visualise this like the movement of sound waves through air: as an alternating series of compressed and rarefied areas of electric charge.

Bismuth 2212 is a cuprate superconductor. Its properties can be explained by Cooper pairs but the pairs don’t form according to BCS theory. (Interestingly, elemental bismuth also disobeys the theory’s predictions.) In the present study, physicists used the same material, engineered to have a threshold temperature of 10 K (-263.15º C). Then, using “plain” STM, they checked if a pair-density wave (PDW) – a series of more-dense and less-dense areas of Cooper pairs – instead of a charge-density wave could be related to its chequerboard charge-ordered phase.

Put differently, they were checking if Cooper pairs were involved in the sudden spike-and-plummet of electrical resistivity as the material was cooled to near its threshold temperature.

The verdict is ‘yes’: a Cooper-pair density wave and a charge-ordered phase appear to be positively correlated in bismuth 2212.

To quote relevant portions from their paper, published on September 17, 2018:

… the superconducting coherence peak … shows a clear chequerboard pattern with the same periodicity as the charge order. … Second, the PDW order is observed in a severely underdoped Bi-2212 where superconductivity just emerges. … Third, our technique has the advantage of mapping the charge and PDW orders simultaneously, which allow us to show that … the pair density and charge density modulations are positively correlated and in phase with each other.

This is an interesting finding from the PoV of Cooper pairs as well as because it’s just beautiful. Who’da thunk the electrons in these gifted materials and the invisible forces that direct them would’ve been able to choreograph such elegant yet baffling formations, even as they buzz around doing other strange things?

Also read: How Machine-Learning Helps Us Understand Strange Materials and Their Stranger Physics

The finding is more beautiful yet because it also raises interesting questions going ahead. For example, now that physicists are almost sure there’s a correlation between the PDW and charge-ordering, is there a causative relationship? And if so, does the PDW cause the charge-ordering or is it the other way?

In their paper, Wang et al briefly discuss a known mechanism that suggests Cooper pairs’ collective behaviour could “induce a modulated charge distribution”. But then they also speculate that – if there is no causative relationship between them – the PDW and the charge-ordering could be the result of a single, common cause. Another set of questions concerns a prevalent but controversial feature of high-temperature cuprate superconductors called the pseudogap.

Only time – and more experiments – will tell.