The Strangeness of Murray Gell-Mann

In the 1940s and 1950s, experimentalists dredged up the so-called strange particles, a group of really heavy particles that Murray Gell-Mann studied to make sense of the strong nuclear force. 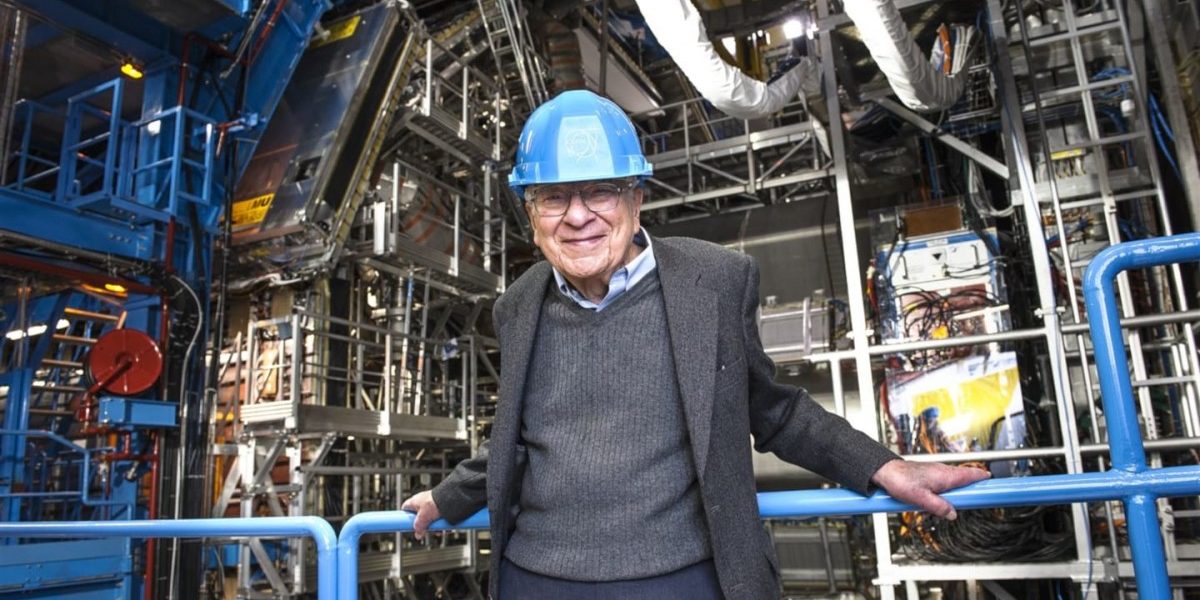 Murray Gell-Mann in the underground cavern of one of the experiments at the Large Hadron Collider during a visit in 2012. Credit: CERN

Madhusudhan Raman
The Sciences
31/May/2019

What holds a nucleus together? Today, we teach the answer to this question in school. A precocious high-schooler might even mention the strong and weak nuclear forces, the latter responsible for radioactive decay. It is difficult to imagine that just 70 years ago, we knew close to nothing about this.

Let’s go back to 1932, when the only known particles were the photon (light), electrons and anti-electrons (a.k.a. positrons), the proton and the neutron. Protons are positively charged and neutrons are electrically neutral, and they make up nuclear matter. Since like charges repel, what keeps the protons in the nucleus from flying apart? Moreover, neutrons don’t carry any electric charge, so what binds them to the protons inside the nucleus?

Werner Heisenberg was thinking about this problem and took inspiration from an unlikely source. After the development of quantum mechanics, one of the first tasks it was brought to bear upon was that of explaining how chemical bonds work, and by the late 1920s, a compelling picture emerged. In the same way that chemical bonds are made up of electrons shuttling back and forth between atoms, could it be that that protons and neutrons were playing catch with *something* that in turn forced them to stay close to each other? And what was this something?

At first, Heisenberg thought that it could be an electron, so he imagined neutrons would spit electrons out and turn into protons, whereas protons would ‘eat’ these electrons and turn into neutrons. This mechanism conserved charge, meaning if you added the charges up before and after the process, they would always match. More generally, when we speak of “X conservation,” we mean that if we add up the quantity X for all the particles before and after the process, they will match.

Now let’s imagine watching a process like this through glasses that shield our eyes from any information regarding the electric charge. It would look like neutrons and protons are morphing into each other. Indeed, apart from their different electric charges, the neutron and the proton are almost identical. Heisenberg wondered if the neutron and proton could be – as seen through these magical charge-cancelling glasses – two states of the same particle.

This his how he introduced the notion of isospin. At the time, atomic nuclei were made up of nucleons, which looked sometimes like protons and at others like neutrons, and were related by an abstract rotation in an “isospin space.” More technically, they were collectively dubbed an isospin doublet, each carrying an isospin of number 1/2.

However, there was a flaw in Heisenberg’s picture of nuclear forces. If neutrons were turning into protons by emitting and absorbing electrons, the charge would be conserved in the process *but not their spin*. For his theory to work, he needed a charged particle with zero spin – but no such particle existed!

A Japanese physicist named Hideki Yukawa had been studying Heisenberg’s investigations into the nuclear force. He proposed, rather boldly, that a neutron transformed into a proton (and vice versa) by emitting (and absorbing) an undiscovered spin-0 particle that mediated nuclear interactions. Yukawa’s particles were called pions and three of them (two charged and one neutral) formed an isospin triplet, each with an isospin number of 1. It was a simple and beautiful world.

But things wouldn’t remain as simple much longer. Significant developments in accelerator and detector technology meant there was an abundance of experimental results, sourced from the energetic beams of particle accelerators, the debris of particle colliders and snatched out of the sky through cosmic rays. It seemed like every day, there were more particles than there were yesterday. When told about the discovery of a particle called the muon, Isidor Rabi remarked “Who ordered that?” The need of the hour was to bring some order to this proliferation – this subatomic bestiary – of newly discovered particles.

Then, in the 1940s and 1950s, experimentalists dredged up the so-called strange particles, a group of really heavy particles produced quickly in pion-nucleon collisions and which took a surprisingly long time to decay. Their decay timescales indicated that the strong nuclear force was responsible for their creation, and the weak nuclear force (responsible for radioactive decay) had a role to play in their demise. This is where Murray Gell-Mann enters our story.

Also read: How Murray Gell-Mann Brought Clarity to a New Force of Nature

Strange particles came in all shapes and sizes: the heavy hyperons, the welterweight kaons, and so on. Gell-Mann and other theorists at the time believed that kaons – that is, the charged kaons K+ and K- and the neutral kaon K0 – were cousins of the pions, only thrice as massive. If one had to, one might have guessed that kaons also formed an isospin triplet.

However, he forgot about the electromagnetic interaction, which would result in a shorter lifetime than was observed. It was clear then that isospin conservation would not suffice. His solution was to introduce a new label: strangeness. This concept was also introduced independently by Abraham Pais and Kazuhiko Nishijima. It is a quantum number that characterises particles just like charge and isospin do (and was more whimsically named).

He supposed that, just like charge and isospin, strangeness was conserved by strong interactions: the amount of strangeness before and after a process would be the same. Since nucleon-pion collisions produce copious amounts of strange particles, and nucleons and pions themselves weren’t strange by definition (i.e. had strangeness 0), strange particles would have to be produced in pairs. This was called associated production, a name due to M.G.K. Menon.

While kaons were just an illustrative example, this new quantum number allowed Gell-Mann to explain the relatively long lifetimes of strange particles and, more significantly, explain or predict the allowed decay channels and properties of newly discovered particles called hyperons that go by the names Xi, Sigma, and Lambda.

Strangeness was also to be an important ingredient of Gell-Mann’s Eightfold Way, a classification scheme that lumped the then-known baryons into groups like the octet (a family of eight) and the decuplet (a family of ten).

The power of this classification scheme closely parallels that of Dmitri Mendeleev’s periodic table. Once you hit upon the right organisational scheme, it will lead the way! And as with the periodic table of elements, where the organisational principle implied the existence of hitherto undiscovered elements, Gell-Mann’s baryon decuplet was missing its apex: the Omega^- particle, which hadn’t yet been discovered. Gell-Mann predicted the existence of this particle with electric charge -1, strangeness -3, and a mass of around 1,680 MeV. It was found just two years later.

This classification was based on an underlying group (a collection of symmetries) that governed the strong nuclear force, which we now call SU(3). The clue came from the sizes of families (groups of eight, ten, etc.) which correspond to the sizes of representations of the SU(3) symmetry group, or the different ways in which the symmetries of the strong nuclear force are permitted to manifest themselves. Gell-Mann’s Eightfold Way (discovered simultaneously by Yuval Ne’eman) ultimately led to the development of the quark model, but it all started with strangeness.