The Significance of the 1819 Allah Bund Earthquake, 200 Years on

The Allah Bund is a monument to the power of the earth. 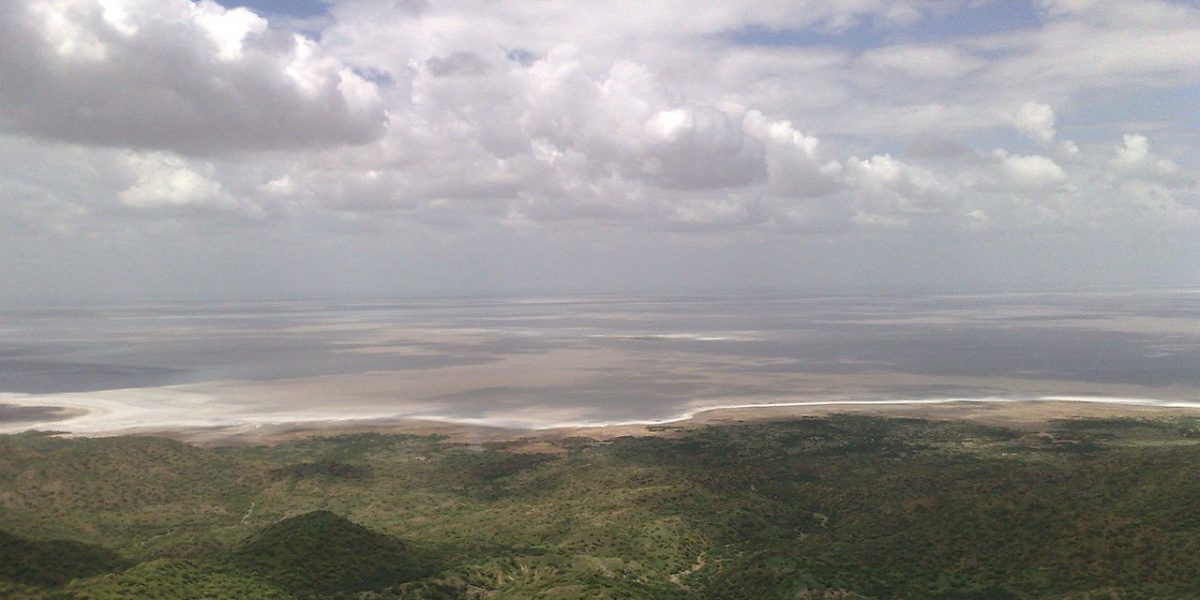 The 'white desert' of the Rann of Kutch. Credit: Superfast1111/Wikimedia Commons, CC BY-SA 3.0

On a cold morning in December 1997, as I stood on the white-topped surface of the Great Rann of Kutch, all I could hear was the sound of the wind and a crackle under my feet. It was a desolate landscape encrusted with salt stretching far and wide, only to be flooded during the monsoons, when the tidal currents from the Gulf of Kutch flow onto this white desert, giving it the appearance of a massive inland sea. Soon after, the waters begin to recede in the dry months and leave behind a salt flat, like an endless stretch of snowy ground.

A spectacular landscape that shimmers under a blazing Sun and sparkles under a Moon-lit sky, the Great Rann – meaning ‘marsh of alluvium’ – is home to India’s largest salt plain. It is located in the Kutch district of the westernmost state of Gujarat.

I came into this amazing nothingness for the first time in the winter of 1997, to observe and understand the evolution of this landscape. It played host to a large earthquake in 1819 that uplifted a part of its northern fringes. My love affair with it continued for several years, for as long as we were funded to study the earthquake’s effects; this later made a lot of sense in the context of an unexpected and similarly damaging earthquake in 2001, whose epicentre was located about 70 km southeast of the 1819 quake.

Both these events have evoked much academic interest worldwide because they are located far from plate boundaries. They teach us of the earthquake-generating properties in the interiors of continents, as with the twin earthquakes of 1811 near New Madrid, Missouri.

I still remember the moment I spotted it. The 1819 quake had generated scarp – a high linear mound 60-70 km long, 16 km wide and between 2 and 4 metres off the ground stretching in an east-west direction on the plains of the Rann. Called the Allah Bund – “the mound of God” – it was silhouetted against the low hills of the distant Nagar Parker ridge near the India-Pakistan border. This scarp had blocked the course of the Nara river, a distant distributary of the Indus that used to flow through the Rann to the Gulf of Kutch and was used to conduct trade between coastal and inland merchants, in the Sind province.

The Allah Bund was a sight to behold. It transformed my textbook knowledge on earthquake-sculpted landforms into an awe-inspiring real-time experience. I understood why Charles Lyell, the famous British geologist who mentored Charles Darwin, had used the 1819 quake as a classic example to argue for the differential movement of land along a fault. He believed the event marked a watershed movement in the history of seismology.

It was impossible to avoid reflecting on the landscape… To borrow the words of Simon Winchester (in his 2003 book Krakatoa), it “presented a distant prospect of where forces of world were at work, a place of an elemental significance, and a disastrous place once – these days quiet again, serenely biding its time.”

The 1819 quake first validated a primary tenet of faulting in earthquake science, and it continues to shape our understanding of faulting processes. Until then, the relationship between fault scarps and earthquakes had received little attention, barring a few isolated efforts. When it occurred, the quake provided evidence of a ‘co-seismic’ surface deformation.

In 1911, Harry Field Reid, a pioneer of modern seismology, summarised the importance of the Allah Bund and used it, along with surface faulting associated with 1906 San Francisco quake, to elucidate the “elastic rebound theory of earthquakes”. Richard Dixon Oldham, an iconic figure in Indian geology and a member of the Geological Survey of India (1879-1903), published a paper in 1923 called ‘The Character and Cause of Earthquakes’, in which he discussed the importance of the Allah Bund.

As it was getting dark, my driver – deputed by the Border Security Force (BSF) – gestured me to get back into the jeep. I was still jubilant for having seen the scarp in its stony flesh. The levelling survey to study know its spatial length, width and height was to begin the next day. I returned to my tent, also setup by BSF personnel, near the Vigakot fort, a pre-1819 trading centre to the north; the 1819 quake had ruined it, along with the Sndri fort in the Great Rann.

Nights can be fascinating in Kutch. Aside from the sound of silence and the chill air, there is something about the dense darkness that envelopes you under the star-lit skies. In the distance, I saw a moving light, and the BSF chief told me, only half in jest, that those were ghosts and that he had seen some himself. He claimed they were the ghosts of people killed in the war with Pakistan in 1965. But then another soldier told me that they were either smugglers or infiltrators, trying to cross the border over the elevated bund.

It is convenient that the earthquake-generated bund parallels the border: if you follow it, you can’t go wrong. It was how one of the camels, which had apparently befriended a male camel from the Pakistani outpost, managed to cross over to Pakistan! However, the BSF, working with their counterparts across the border, was able to negotiate her return to India; cross-border love affairs are strictly not permitted, even between camels.

During one of my subsequent fieldwork seasons in the Rann of Kutch, we happened to pass by the shooting of a film whose story resembled the camels’, starring Kareena Kapoor and Abhishek Bachchan long before they became Bollywood stars. The film was called Refugee; though it bombed at the box office, its message was heartening: that love transcends the natural and artificial barriers between countries.

The quake rocked Kutch and the southern parts of Sind at around 6:50 pm on June 16, 1819. It destroyed about 7,000 houses in Bhuj, about 80 km to the south, and killed more than 1,000 people. Captain MacMurdo, who was stationed in Bhuj at the time, described the event thus in an article read before the Literary Society of Bombay on April 28, 1820:

The first and greatest shock took place on the 16th of June 1819, a few minutes before seven in the evening. The day had been cool and showery; Fahrenheit’s thermometer ranging from 81° to 85°. The monsoon had set in mildly… The wind, which had been blowing pleasantly towards evening, at the commencement of the concussion fell into a dead calm, and in a moment, all was consternation and horror. The wretched inhabitants of Bhooj were flying in all directions. A heavy appalling noise, – the violent undulatory motion of the ground, – the crash of the buildings, – and the dismay and terror which appeared in every countenance, produced a sensation horrible beyond description. The shock lasted from two to three minutes, and during that short period the city of Bhooj was lamost leveled with the ground… The devastation was general throughout Kutch. From Luckpat Bunder to Butchao, in every town and village, more or less lives were lost by the falling in of the houses; and in the towns of Mandavie, Moondria and Anjar, very extensive damage has been sustained…

In fact, the ground shook so much that it toppled the spire of a 450-year-old mosque in Ahmedabad, 300 km away from the epicentre. It was the first large historically known earthquake that impacted flourishing human settlements and their corresponding infrastructure, including water ways and tax-collection centres. Following the quake, a sudden rush of water from the ocean inundated the region. Widespread soil liquefaction could also have squeezed out subsurface water, worsening the flood.

The Allah Bund that had formed impeded active water-based trade and transport as well as agriculture in the region’s north, which depended on irrigation even though some dams had been erected upstream before the quake had reduced the water flow.

Our quest to trace the origins of this event and its predecessors had brought us to the fascinating Great Rann many times. We went right up to its source near the Vigakot Fort. We sought and picked up on leads; e.g., humans like to rebuild, so we looked out for traces of cultural artefacts. This is how we discovered the remains – brick fragments and charcoal traces, to be exact – of an old structure about 2m below the current surface, possibly from a 1,000-year-old ancestral kitchen. It seemed like it had been laid to waste by an older quake.

The Rann of Kutch had probably been undersea when Alexander the Great reached the western part of the Indian subcontinent. The history of this region has been well-documented for over 2,000 years. For example, some ancient scholars have referred to a disastrous sea-level variation in the Indus delta and its consequences on the Macedonian fleet during the campaign Alexander led in 326 BC. The proto-historical Harappan settlers in Dholavira, at the eastern extremity of the Rann, could have used the shallower sea at the time for trade.

The Rann had been getting gradually shallower and raised due to vertical forces that precipitated the occasional large earthquake, like the one in 1819. There is also evidence for another in 893 AD to the north and another one of indeterminate magnitude in 1668 to the northwest. The one in 893 reportedly destroyed an important port city called Debal, near modern Karachi, and its fate was finally sealed by a massive flood in the Indus in 1226. Our studies suggested a gently inclined and north-plunging fault, which did not reach the surface, to be the one that hosted the 1819 earthquake. This could explain the raising of a south-facing scarp – the Allah Bund –  at the tip of the fault and the land sinking a few meters on the south of the bund.

The study of earthquakes from the pre-instrumental era is remarkable but challenging. On our various trips to the Kutch, we were on exciting missions, camping with the BSF soldiers and travelling through the Rann looking for sites at which to look for fossil evidence of earthquakes. The 1819 earthquake greatly impacted the region’s environmental and social histories. Scientifically speaking, it also provided insights into earthquake-related processes within the continental interiors, where large earthquakes are sparse, unlike the plate boundary regions.

Two centuries have passed and the Allah Bund still stands, resisting erosion by wind and water. It is a monument to the power of the earth. This is something humans tend to forget as they build their empires: that nature has a way of razing them down. As a sharp reminder, the city of Bhuj, wrecked once in 1819, was rocked yet again by a similar quake in 2001, this one located about 70 km away from the epicentre of the previous one. The events also served as reminders that earthquakes by themselves are what compelled the historians Will and Ariel Durant to say, in their epic Story of Civilization, that “history is subject to geology”.