What Does a Water Body Near Antarctica Have to Do With the Monsoons?

As the upper Indian Ocean warms, it plays havoc with the rains over India. Photo: Jim Witkowski/Unsplash

Ocean circulation theories suggest that deep ocean warming may affect the upper ocean. This is necessary to maintain the energy balance in the form of the heat that the ocean and the atmosphere are exchanging. As it turns out, the Indian Ocean has become an indicator ocean – a body of water that scientists use to understand how heat at the bottom of an ocean affects its upper reaches. This relationship, for example, affects monsoon variability, extremes and trends.

The upper ocean is of course directly affected by global warming, but if it also responds to deep-ocean warming, it could be in double the trouble. It’s something we must track carefully because as the upper Indian Ocean warms, it plays havoc with the rains over India.

In Earth’s northern latitudes, water sinks from the surface towards the bottom, flows towards the tropics and into the deeper parts of the oceans at the lower latitudes. Such sinking of heavy waters happens in a few places in the Greenland-Iceland-Norwegian (GIN) seas in the northern Atlantic Ocean and off Antarctica in the Southern Ocean.

These heavy waters make their way into the tropical oceans over hundreds of years and are slowly brought up to the surface as the heavier water mixes with the lighter water above. This global circulation is called the Global Conveyor Belt, and it plays a critical role in moving heat and greenhouse gases away from the surface, into the deep ocean, and hiding it from the atmosphere for a long time. Global warming is thus heavily modulated by the Global Conveyor Belt. 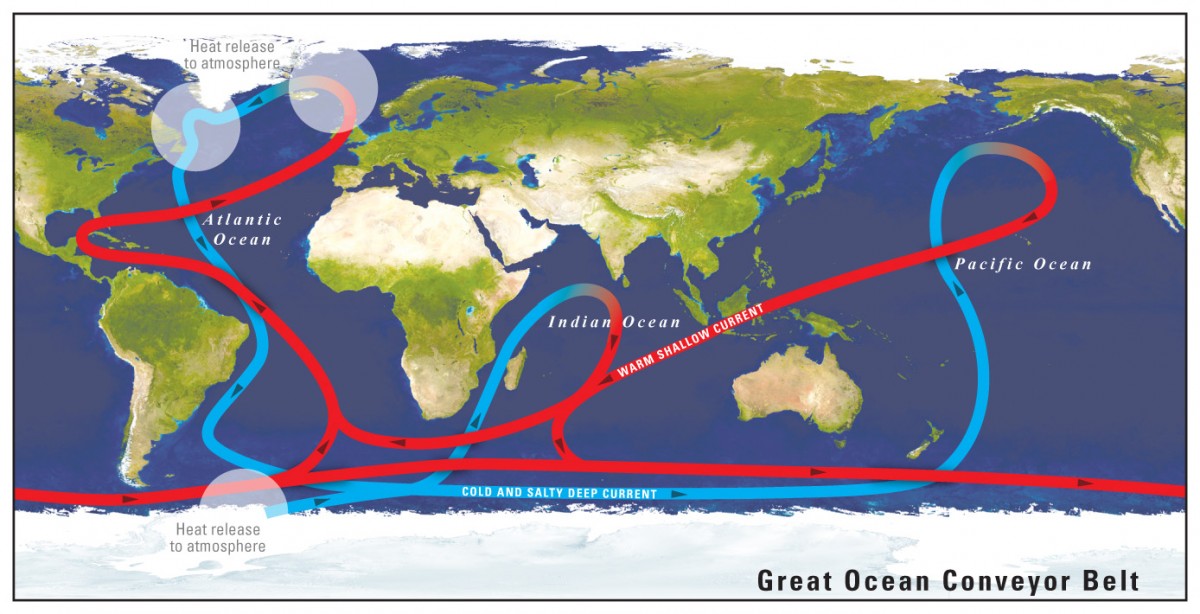 An illustration of the Great Conveyor Belt. Image: USGS

Thanks to the Asian landmass acting like a plug to the north, water in the Great Conveyor Belt moves in and out of the Indian Ocean in the order of decades – which is fast. The implication is that the Indian Ocean responds rapidly to warmer waters that the belt pumps in from the Southern Ocean towards the Indian Ocean.

The Southern Ocean is also special. In all other oceans, their longitudinal extent is limited by continents on either side. As winds blow from east to west, like the trade winds, or from west to east, as in the midlatitude westerlies, they transfer some of their energy to the water. But the continental landmasses on either side limit the amount of energy that can be transferred. On the other hand, the Southern Ocean is a circular channel, and winds over its surface can keep dragging the water round and round, transferring more and more energy – at least until the wind-driven currents reach the bottom.

This wind-powered churning also drags heat from the Southern Ocean’s surface to its bottom. This doesn’t happen in other oceans, where the surface heat diffuses very slowly. The belt then moves this heat directly into the Indian Ocean.

The local surface warming and the remotely forced deep-ocean warming together explain why the Indian Ocean’s surface is warming steadily and quickly. The ocean already acts as an infinite moisture source for rainfall over India, and a warmer ocean has aided and abetted rainfall outside of the traditional seasons.

The National Center for Polar and Ocean Research (NCPOR) in Goa regularly organises scientific cruises to the Southern Ocean. Thus far, it hasn’t focused on the north-south or meridional circulation from the Southern Ocean into the deep Indian Ocean and back into the Southern Ocean near the surface, but it might be time to include this belt as a specific target for observation and modelling.

The process of the Southern Ocean’s warming and the tropical upper Indian Ocean’s response were reported in a study published on October 18, 2019, (this writer was one of the study’s authors). It highlights yet another complication that predictions of the monsoon have to deal with. The Indian Institute of Tropical Meteorology, Pune, recently concluded its climate simulations for the IPCC’s Sixth Assessment, due out in 2021, and they will serve as an excellent source of further analysis of the Great Conveyor Belt.

Raghu Murtugudde is a professor of atmospheric and oceanic science and earth system science at the University of Maryland. He is currently a visiting professor at IIT Bombay.