Pseudoscientific Claims Are Irrational – but That's Not Their Biggest Danger

The proposition that – once we remove all "others" who do not fit the majoritarian definition of cultural nationalism – such nationalism will restore to the nation some version of a "golden and glorious past" is absurd. Even as public policy on science and technology is being contaminated by pseudoscience, such myths also instil notions of “scientific” superiority and greatness of the Hindutva worldview in gullible minds.

In the last edition of the Indian Science Congress, noted academics made claims about test-tube technologies in the time of the Mahabharata, the use of guided missiles as weapons in ancient wars and two dozen kinds of pushpak vimanas employed by Ravana, among others. In fact, every recent science congress has sported such gems. Similar statements have also been made by people holding high public office in recent times. One minister denied the theory of evolution while another claimed that the Mahabharata wars had been “webcast” using the internet that must have existed at that time.

Many scientists expressed outrage and protested. They were concerned that such bizarre statements only bring disrepute to Indian science. This of course is somewhat self-evident but more than the absurdity of the claims themselves, it is the irrational nature of the political discourse from which they emanate that should be cause for concern. It is this discourse that now channels funds from an already poorly funded scientific enterprise into cow-related research projects of dubious value.

Even more pseudoscience research seems to be in the air. K. VijayRaghavan, the principal scientific advisor, has worried that pseudoscience could become more dangerous if it affects the public policy space. However, it is already doing so, as the above projects indicate.

What kind of spirit of science does the following tweet (now deleted) from the AYUSH ministry reflect? Is this public advisory from a government ministry for pregnant women not just pseudoscience but also dangerous?

The same ministry issued similar advisories for curing dengue and chikungunya. It is ironic that public agencies that ought to focus on extracting knowledge from ancient traditions through careful experimentation, validation and trials are simply glorifying all the obscurantism that surrounds a possibly useful kernel.

In another example, the Centre has recognised a Bhartiya Shiksha Board (BSB), apparently to standardise the educational instruction of Sanskrit and the Vedas. Quite apart from the questions of where our Sanskrit and Vedic scholars will find employment, what kind of pseudoscience may slip into schools that come under BSB is a matter of concern. In September 2017, the same evolution-denying minister appealed to IITs to teach their students about pushpak vimanas. Next time, it may become policy to do so.

Such fantastical claims and advisories serve a social function: to legitimise the cultural nationalist worldview by providing their followers with the affirmation that “we are as good as any modern (read: Western) civilisation or, even better, in science, technology and innovation”. This social function is the bigger threat than the irrationality of the literal claims.

The proposition that – once we remove all “others” who do not fit the majoritarian definition of cultural nationalism – such nationalism will restore to the nation some version of a “golden and glorious past” is absurd. It is – politically and socially speaking – pseudoscience of enormous proportions. This worldview channels all forms of discontent into a socially divisive, petty, identitarian politics that builds on the aspirational goal of our becoming “great again” based on past achievements. And it is these achievements that the Hindutva brigade seeks to legitimise as science.

It should also be cause for worry that pseudoscientific claims find so much traction among the people. It says much about our education system that so many people can’t distinguish between mythology and history. It would also be a mistake to think that these claims are the work of a fringe group. Their statements sit well with a “common sense” rooted in religious beliefs combined with a nationalistic fervour, and such common sense asks — if we did not have advanced reproductive technologies — how could a hundred children have been born simultaneously to a mother.

Thus, the story itself becomes the proof. Myths, legends and folklore literally spring to life. The existence of the modern version (guided missiles) becomes further proof that the ancient one (sudarshan chakra) also existed. It reminds us of a bygone golden age that is being recreated today.

This traction is immersed in a sea of profound beliefs. Consider the theory of evolution. The superficial logic in denying the theory is that the evolution of humans from apes has not been reported in any ancient texts and, in any case, such transformations have never been seen in real-time. A deeper reason is that this hypothesis is abhorrent to the belief that humans are the pinnacle of God’s creation.

In the US, the debate between the ideas of natural selection and a Bible-based, more literal creation science distorted academic curricula for decades because it mandated some states to give ‘equal time’ to both theories. At least public research funding was not diverted to promote “research” in creation science. Nonetheless, the programme did great damage to thousands of impressionable minds forced to imbibe fantastical biblical tales as some kind of science instead of as legends.

More importantly, these religious “theories” of creation had a natural corollary: that God did not just create human beings; he also created the cast-in-stone hierarchies into which he put them. Like that, race and caste become immutable and eternal, with divine sanction.

Any criticism of pseudoscientific claims immediately provokes pushback of many varieties. The most benign of these is that Western science is ignorant, incomplete and imperfect, and therefore does not understand “these” things (science itself has not explained many things, in any case). In more elaborate forms, this response says: Western science can’t even comprehend this ancient knowledge, so how can it dismiss it?

The more virulent responses are packaged in nationalistic rhetoric of ‘our science versus theirs’, and disbelief in mythology-motivated science being seen as anti-national. Many votaries of ancient science feel that the current nationalistic discourse has actually liberated them from practitioners of Western science, which is why more people have dared to make such claims.

It will not be surprising if some people actually believe that we have not been able to produce “gold from cows” because of a conspiracy by Western scientists and liberals to keep India poor. The astounding nature and intensity of these comments make for shocking reading.

For one, sample the readers’ comments on this interview of Venki Ramakrishnan: 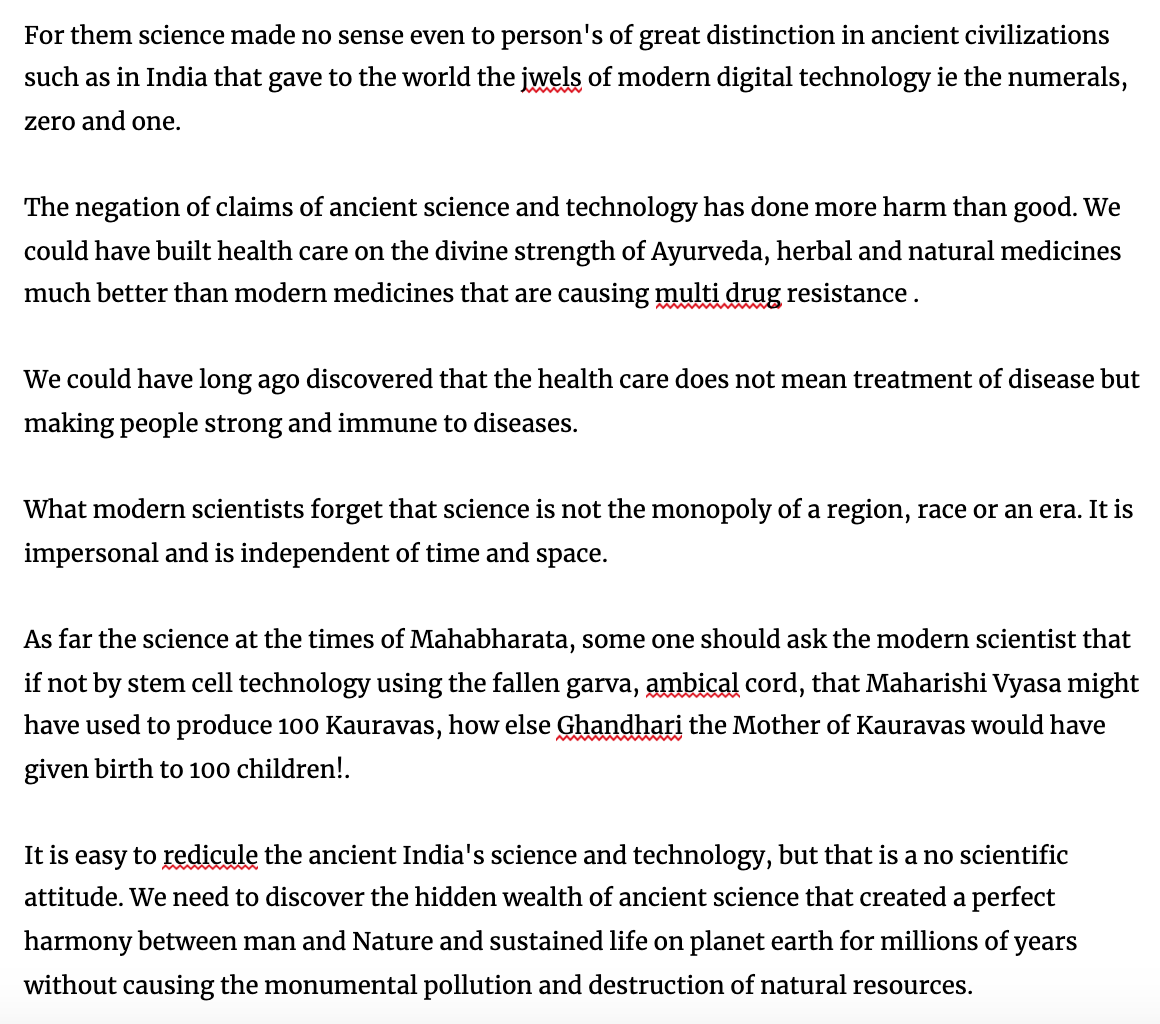 A sample comment by one of the readers of the interview

It is hard to believe these readers are, at the very least, well-informed about genetics, DNA, aerospace engineering, computer networks, evolutionary time, etc. Are they aware that scientific rationality – which gives us the satellites we launch and the diseases we treat – is vetted through experimental evidence, possible falsifiability, reproducibility, and peer review?

These attacks often fiercely demand that “ignorant”, “foolish”, “West-loving” scientists should either take these claims seriously or shut up. So what will it come to now? Will it now be official policy that polluted air be cleaned by doing yagnas? Will these areas now become research topics of national interest?

This tragicomic perspective hardly seems a good recipe to lead the country to the world’s scientific and technological forefront. It is also the cruelest of contradictions for a nation that loves mobile phones, bullet trains and satellite busters that such research and education will manufacture hordes of unemployable youth instead of innovators and entrepreneurs.

To combat this, there is perhaps no alternative than to spread the public spirit of rationality and scientific temper, but such an enterprise seems to have bleak prospects in this new age of unreason and ancient alternative facts.

Anurag Mehra is a chemical engineer and is associated with the Centre for Policy Studies, both at IIT Bombay.