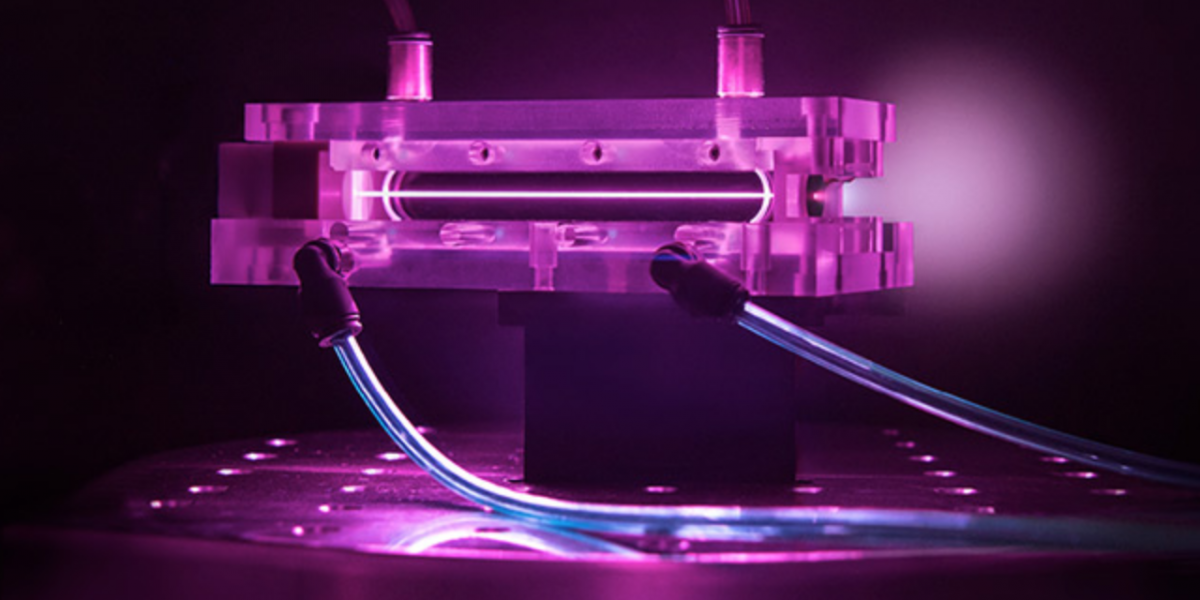 As particle physicists around the world debate whether humankind needs a $22-billion, 100-km long ‘supercollider’, other physicists are working on shrinking these machines to fit on a tabletop.

The idea for tabletop – or, more accurately, wakefield – accelerators was first birthed in the late 1970s, and then realised technologically in the 2000s by American physicist Chandrashekhar Joshi. Where the Large Hadron Collider (LHC) accelerates protons over thousands of kilometres (round and round in a ring), a wakefield accelerator does the same thing over a few centimetres. The only reason it hasn’t entered mainstream use is because it can barely achieve the same energy the LHC does.

A particle accelerator is a machine that drives subatomic particles to very high velocities and energies. These machines typically also make sure that the accelerated particles are kept in a tight, narrow beam.

The acceleration gradient here is the amount of energy imparted to a particle over a given distance. A linear accelerator like at the Stanford Linear Accelerator Centre (SLAC) can manage 0.7-0.8 gigavolt per metre (GV/m). So if it had to energise a particle from zero to 10 GeV, it will need to accelerate the particle across 12-14 metres. Circular accelerators have a gradient of about 0.25 GV/m. To compare, a wakefield accelerator can achieve 10-100 GV/m.

However, it can only sustain this over a very short distance, in the order of a few centimetres. This means it can accelerate the particle only to a few GeV. In a world where higher energies are mandatory for research, this is no good. Machines already exist to push particles to 7,000 GeV. 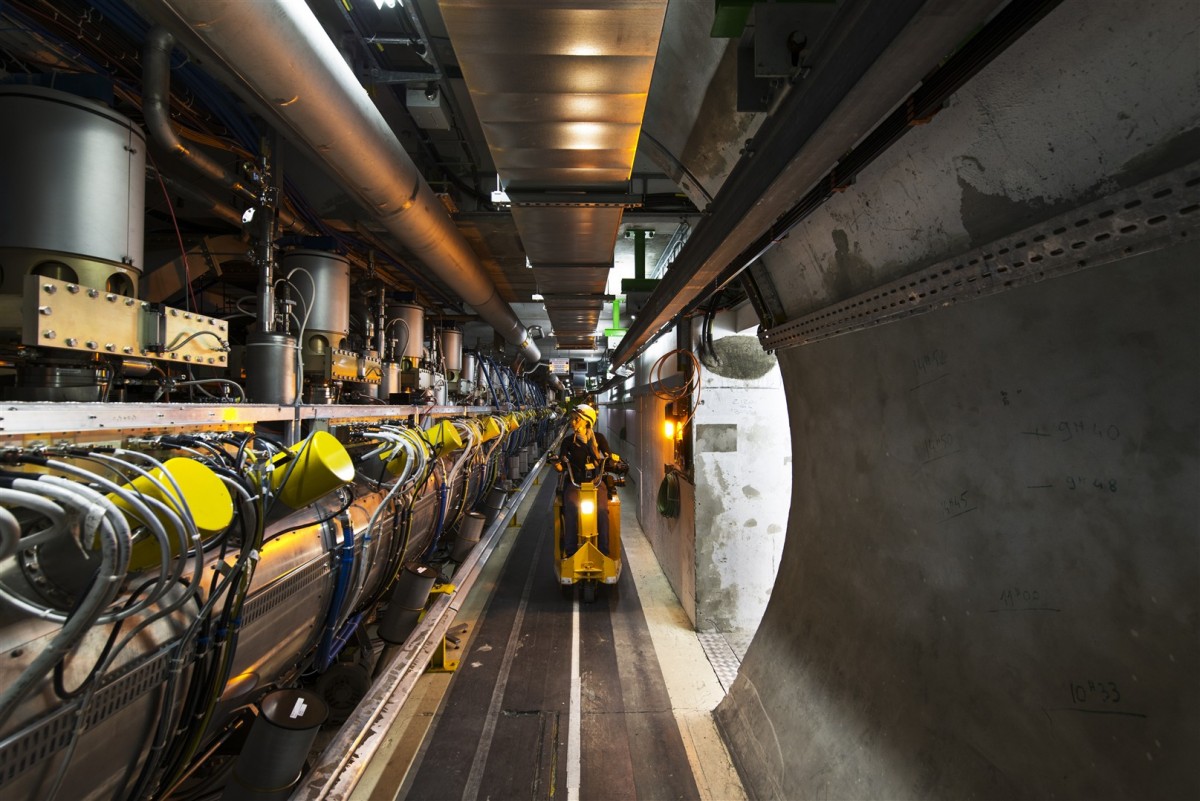 A section of the LHC showing a module of radio-frequency (RF) cavities. RF cavities are used to accelerate charged particles. Credit: CERN

But physics research isn’t everything, and this problem doesn’t render the accelerators useless. To the contrary, opportunities abound.

In fact, lower energies are more important in some contexts. Most medical instruments operate at the sub-GeV level; it’s physics that requires 1 GeV and above. In the mid-2000s, it was estimated that there were around 10,000 accelerators around the world used in diagnostics and biomedical research, out of 18,000 accelerators in all. By 2014, the total had ballooned to 30,000, with over 15,000 used for medical purposes.

A “third generation” medical linear accelerator energises electrons to about 20 MeV, then smashes them against a heavy-metal plate to produce X-rays. These X-rays are used to look inside the human body. Such machines are about 10 feet tall and, according to a 2013 review, cost $4 million (Rs 28.5 crore) apiece and need to be replaced every five or so years. Their size makes them harder to maintain as well as harder to manoeuvre around a person’s body.

Notwithstanding certain caveats (discussed below), a wakefield machine could potentially reduce this cost by a factor of thousand. In turn, they will become more accessible to doctors, medical researchers and – crucially – university students. When used with an X-ray free-electron laser, one physicist speculates, “a vast number of applications, most notably the determination of the 3D structure of biomolecules, could be carried out by a much broader community of researchers, complementing large-scale facilities where beam time is expensive and scarce”.

With a view to surmounting these challenges, scientists have been hard at work.

In 2014, a group at the Lawrence Berkeley National Laboratory (LBNL), California, pushed electrons to 4.25 GeV in a wakefield accelerator – a record at the time. In 2015, scientists from the University of Maryland found that certain subtle modifications to the accelerator could help achieve a higher acceleration gradient with lower power consumption. On the back of this, the LBNL group found a way to connect multiple accelerators back-to-back in 2016. And now, they’ve reported another increase, a new record: electrons energised to 7.8 GeV.

This is a big leap but there are problems. One is that wakefield machines that can rival the LHC’s energy will have to be a few hundreds of metres long, and no longer table-sized. But this is still not bad considering the LHC is 26.7 km long. Moreover, wakefield accelerators that can achieve a few thousandths of a GeV are still very small, the size of a shoebox, much smaller than the room-sized machines that accelerate particles to similar energies the ‘conventional’ way.

The LHC deploys powerful magnetic fields to accelerate charged particles through large distances. The SLAC uses instruments that rapidly alternate the voltage between two points and use microwaves to bump particles forward. A wakefield accelerator has fewer components but is more sophisticated than both.

There are different kinds of wakefield accelerators. A typical setup involves first creating a plasma. Second, a laser is fired into the plasma, ‘driving’ the particles forward. Because the ions are much heavier than the electrons, they separate out into two groups as they move.

As they push forward, a trailing electric field develops behind them – the so-called wakefield. Accelerators differ on how they transfer the energy in this wakefield to electrons moving inside it.

A supercomputer simulation showing a rendering of plasma waves (blue) excited by a petawatt laser pulse (red) at Berkeley Lab’s BELLA Center as it propagates in a plasma channel. Caption and credit: Carlo Benedetti/Berkeley Lab

The simplest way is to ‘drop’ an electron into this setup and let it speed along the wakefield, becoming energised as a result. But there’s a problem. As the electron accelerates, it moves faster – but as the driving laser moves through the plasma, it slows down.

One workaround is to connect multiple wakefield accelerators end-to-end, as the LBNL group did in 2016. But this isn’t so straightforward because successive accelerators achieve lower accelerating gradients.

Another is to use multiple carefully tuned laser pulses. The LBNL group used this method, together with some technological interventions, to improve the acceleration gradient.

First, physicists created the plasma and moved it into a very narrow tube of glass. They applied a voltage across its ends to separate the electrons and ions. Second, they fired an 850-trillion watt laser into the plasma, in pulses each 35 femtoseconds long, to generate the wakefield. Third, they used another laser to heat the plasma such that it was cooler along the glass and hotter towards the centre. Such a density gradient ensured that the plasma could sustain the acceleration over almost 20 cm, and along a tightly focused beam.

The technological sophistication at work here is best illustrated by the following factoid: it took physicists 13 years to go from accelerating electrons in a wakefield to 1 GeV to nearly 8 GeV. In the pioneering 2006 experiment, also conducted at LBNL, physicists used a 40-trillion watt laser and a 3.3-cm-long tube. When the 4.25 GeV record was set, Georg Korn, technology manager at the Extreme Light Infrastructure Beamlines facility, Prague, wrote:

Laser plasma acceleration has … been driven by technological advances that boosted laser peak and average power, together with stability, repetition rate (pulses emitted per second), and electrical efficiency.

A third workaround involves using a different kind of driver altogether – as physicists at CERN did last year. They worked on an experiment called AWAKE, which stands for ‘Advanced proton-driven plasma Wakefield Acceleration Experiment’. The physicists first created a plasma. Then, instead of a high-power laser, they accelerated a bunch of protons in the Super Proton Synchrotron, a smaller particle accelerator at CERN, to 400 GeV and fired them into the plasma as the ‘driver’. Next, they fired a relatively weaker laser focused on the middle of the bunch. This had the effect of breaking up the back half of the proton bunch into a series of ‘microbunches’ while pushing on the front half.

The trailing microbunches then created a wakefield for electrons to surf in. As a result, they were able to achieve an acceleration gradient of “hundreds” of MV/m across 10 cm.

Two studies released by the AWAKE collaboration (this and this) show that the proton-driven technique can work with a lower plasma density than the laser-driven one. It is also easier to conduct because it doesn’t require as much optical, mechanical and electronic coordination between different components of the experiment as a laser accelerator does. But on the flip side, it does require pre-accelerated protons, which may not always be available.

Then, again a laser-driven accelerator requires high-power, short-duration lasers that are just as hard to find. In fact, a fourth workaround has a similar issue. In 2013, physicists from Stanford were able to accelerate electrons at 300 MV/m simply by shining infrared light over a specifically engineered series of ridges. But the technique only worked if a pre-accelerator was used.

So although neither the LBNL nor the AWAKE machines are ready for primetime, they have demonstrated important advancements that can help scientists build better ‘small accelerators’ in the future. One way they have done this is by highlighting the problems we need to focus on depending on who is going to use them: biomedical students or particle physicists.

Thanks to the people working on wakefield acceleration, we also have a clearer picture of the opportunities these machines present, and what we need to do to get there. Now is the time to explore – to find out what is possible and what isn’t. Doing them better comes later.