Though his most well-known contribution is the proposal that protons and neutrons are not indivisible, there is another story that is less popular but is more intimately connected with the great physicist's life and work. 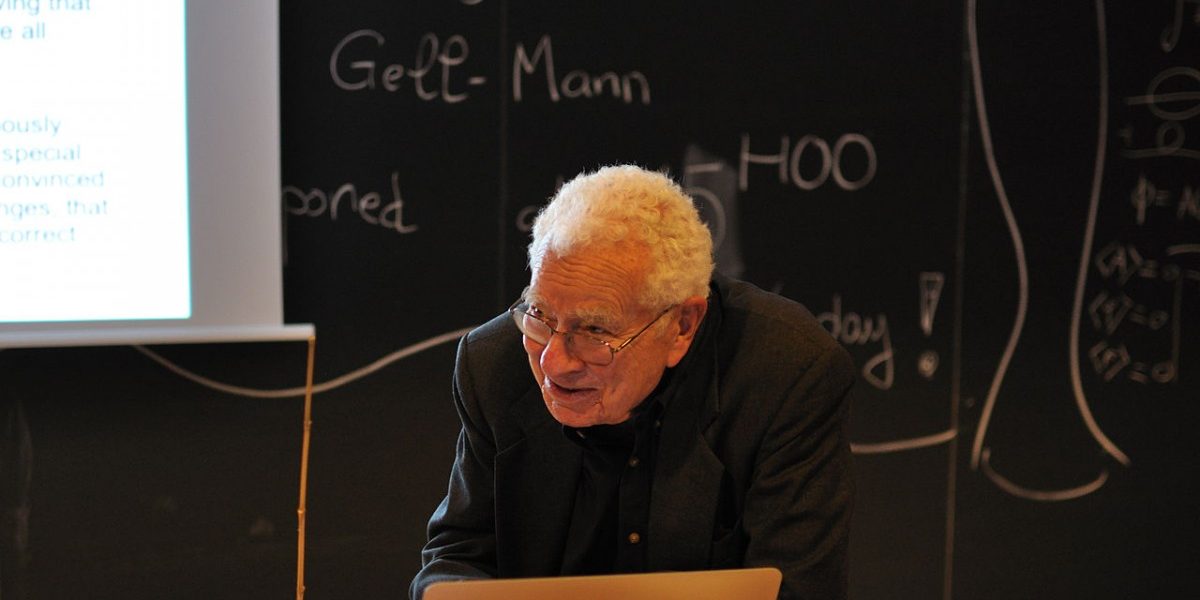 Murray Gell-Mann, who passed away on May 24, 2019, was a giant of modern particle physics. His most well-known contribution is the proposal that protons and neutrons are not indivisible but are made up of smaller particles called quarks.

However, there is another story â€“ that of the strong interactions â€“ that is less popular but is more intimately connected with Gell-Mann’s life and work.

After Ernest Rutherford discovered the proton in 1917 and James Chadwick discovered the neutron in 1932, physicists began to recognise the existence of a new force of nature, called the strong force, that binds the protons and neutrons to form the atomic nucleus.

Sometime after the discovery of the neutron, the German physicist Werner Heisenberg introduced a concept called isospin symmetry to make sense of the fact protons and neutrons are so similar in many ways. This symmetry is now called SU(2) symmetry because it concerns the two kinds of particles.

In 1935, the Japanese physicist Hideki Yukawa propounded a now-famous theory that the protons and neutrons were bound together because they exchanged particles later called mesons. Future studies with cosmic rays confirmed the existence of these particles. More specifically, the exchanged particles are called pi mesons, or pions.

In fact, physicists began to find a variety of particles in cosmic rays, such as the Lambda, Sigma and the K meson. These particles had exhibited strange behaviours. Working independently, Kazuhiko Nishijima and Gell-Mann found, in 1953 and 1956 respectively, that their behaviour could be explained if the particles possessed a new attribute, or quantum number, called ‘strangeness’. This explanation was encapsulated in the Gell-Mann-Nishijima formula and became an important part of particle physics.

Also read:Â A Century of the Proton

It was at this juncture, in 1961, that Gell-Mann’s most influential contribution to the study of fundamental properties of matter arrived. Gell-Mann noticed that apart from the proton, the neutron and the Lambda, there were five other particles similar to them. They were the Sigma^+, Sigma^-, Sigma^0, Xi^0 and Xi^-. Gell-Mann and Yuval Ne’eman (working separately) proposed that these eight particles together formed a family under SU(3). Gell-Mann called it the Eightfold Way (from Buddhism’s ‘Eightfold Path’), and it became a very successful way to represent the relationships between these particles.

Physicists ascertained its legitimacy in 1964 after they discovered a particle whose existence Gell-Mann had predicted using the Eightfold Way, called Omega^-. 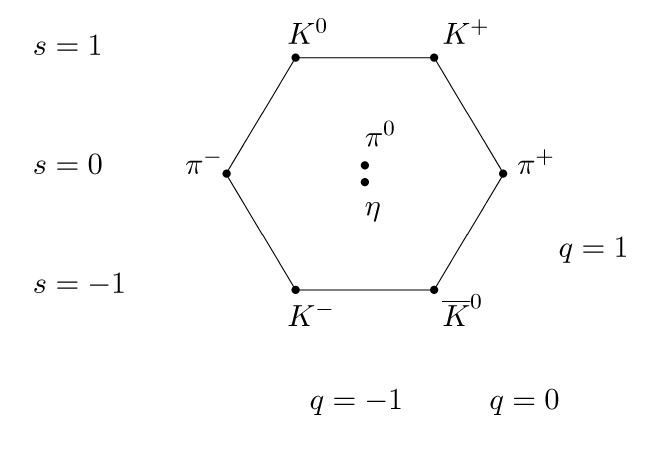 A representation of the Eightfold Way. Particles along the same horizontal line share the same strangeness while those on the same left-leaning diagonals share the same charge. Caption and credit: Laurascudder/Wikimedia Commons, CC BY-SA 3.0

However there was still one problem. The SU(3) group needed a triplet of representative particles since the proton, the neutron and the Lambda now belonged to the Eightfold representation. And without a triplet, the SU(3) symmetry couldn’t be defined. So where was the triplet?

At this point, I would like to describe what I call the ‘Bangalore event’. In August 1961, the first summer school in theoretical physics of the Tata Institute of Fundamental Research (TIFR) was held at the Indian Institute of Science, Bangalore. The lecturers were Gell-Mann and Richard Dalitz, and the audience included Homi Bhabha, M.G.K. Menon, Yash Pal and other physicists and graduate students.

Gell-Mann lectured on SU(3) symmetry and the Eightfold Way, fresh from the anvil, even before they had been published in journals!

During one of these lectures, Dalitz questioned Gell-Mann about the triplets. Why was he ignoring them? Gell-Mann managed to evade a direct response in spite of Dalitz’s repeated questioning. If Gell-Mann had answered the question, he might have predicted the existence of a new kind of particle called quarks in Bangalore in 1961 instead of somewhere else three years later.

Indeed, if any of the other Indian participants had succeeded in answering Dalitz’s question, we would have got the quarks and this would have been a major Indian contribution. It was a missed opportunity.

Gell-Mann and George Zweig independently proposed the idea of quarks in 1964, but it would take many more years before they were confirmed to exist. Gell-Mann himself was rather tentative about their physical truth: the title of his published paper was ‘A schematic model of baryons and mesons’. (‘Hadron’ is the name of any particle that participates in the strong interaction.) To him, quarks were only mathematical, an on-paper technique to break down a complicated problem.

His reluctance hinged on the prevalent S-matrix philosophy. The idea that some strongly interacting particles like quarks were ‘more’ elementary than others was repugnant to the whole scheme of S-matrix theory. In fact, G.F. Chew, the chief proponent of the S-matrix theory, delivered a lecture at TIFR in Mumbai in the late 1960s, where he claimed he could prove that, because of relativity and quantum mechanics, no particle more elementary than the proton or the neutron was possible.

But in spite of this quark-phobia, a few bold souls took the idea seriously and worked out the consequences for particle physics. They included A.N. Mitra, Giacomo Morpurgo and Dalitz.

Dalitz in particular â€“ perhaps as a response to the Bangalore event â€“ began work on the quark idea. He surprised everyone at the Rochester Conference in 1966 when he claimed all the properties of the hadrons checked out if one assumed they were all made of quarks. Nonetheless, although these calculations provided compelling evidence for their correctness, there was no clinching evidence for quarks yet.

In the meantime, Gell-Mann was making steady progress on his programme to exploit the mathematical quarks to glean more information about strong interactions, through what he called current algebra.

Quarks eventually became ‘real’ after two important experimental discoveries. The first was when, in the late 1960s, high-energy electrons were used at the Stanford Linear Accelerator Center (SLAC) to probe the internal structure of protons.

The second was the discovery of the psi particle, which had an extraordinarily long lifetime before it decayed to lighter particles. (The heavier a particle, the faster it is supposed to decay.) It was akin to archaeologists stumbling upon an ancient human settlement living in some remote corner of the world. Physicists resolved the puzzle of psi’s longevity by including a new quantum number called ‘charm’.

Many of those who had been sceptical of the quarks model started believing in it after these developments.

The success of the quark model has a parallel in the history of atoms. At first, many scientists like Ernst Mach, Wilhelm Ostwald and others did not believe in the reality of atoms, while Ludwig Boltzmann waged a heroic battle against their conservative notions. He emerged triumphant after Jean Baptiste Perrin experimentally verified Albert Einstein’s formula for Brownian motion, which was predicated on the idea that atoms and molecules exist.

How were the quarks made visible? In the experiments at SLAC, physicists shot high-energy electrons at protons, and some of them bounced back because they had struck smaller point-like particles inside the proton. These point particles were identified as the quarks.

The SLAC experiments also showed that when a proton is probed by a high-energy electron, the quarks inside the proton behave like free, non-interacting particles. This behaviour of theirs â€“ to appear to be ungrouped at high energies â€“ was called asymptotic freedom. Soon after, theoretical explorations of asymptotic freedom hinted to physicists that there was another kind of particle inside the proton. It was called the gluon and was identified with a quantum number called ‘colour’.

Along with Harald Fritzsch and Heinrich Leutwyler, Gell-Mann proposed this exchange to be the foundation of the theory of strong interactions.

By 1995, physicists had discovered the six types of quark theorised to exist: called up, down, strange, charm, top and bottom (and their antiparticles).

The physics of strong interactions was complete… right? Not exactly. There was another problem. If you smash an atom with high-energy particles, electrons pop out. If you smash a nucleus, protons and neutrons pop out. But if you smash a proton, quarks don’t pop out. This is because quarks are said to be permanently confined within a volume of space the size of the proton. Physicists believe confinement is a consequence of chromodynamics, but this is yet to be proven.

Many of the world’s brightest minds and biggest computers are working on it but the answer remains out of reach.

Gell-Mann was awarded the Nobel Prize for physics in 1969. From 1955 to 1999, he taught at the California Institute of Technology. In his later years, he devoted himself to studies of complexity theory at the Santa Fe Institute in California, which he had co-founded with other scientists in 1984.