Long Ago, the Number of Meteors Hitting Earth Spiked Suddenly – and Didn't Stop

Something happened in the Solar System about 300 million years ago, and Earth and the Moon have since been assailed over twice as often by meteors.

About 300 million years ago, something happened. And the Moon was hit by meteorites twice to thrice as often after this period than before.

The Solar System has always been a dangerous place for careless travellers. Out there are large clouds of dust, millions of rocks dislodged from ancient collisions, fragments of comets, meteors and asteroids, even interstellar interlopers. The dangers of space haven’t been limited to radiation and extreme isolation.

But even in this chaotic picture, it is startling to find that the rate at which rocky objects struck the Moon suddenly spiked so sharply. What could’ve happened?

The answer to this question is important because, as a new study notes, if the Moon is being hit faster, then Earth could be as well. We just wouldn’t know it because Earth’s atmosphere burns off many of these objects before they reach the ground. Even when they do, plate tectonics messes with all but traces of the more recent impacts. And then there’s the weather. Our natural satellite has none of these luxuries, and its surface is frequently pocked by small and large rocks.

So the Moon is like “a time capsule for events that happen in our corner of the Solar System,” Sara Mazrouei, a planetary scientist at the University of Toronto and one of the study’s authors, told National Geographic.

However, that doesn’t mean what strikes the Moon stays on the Moon. The lunar surface does undergo some transformations thanks to processes like erosion. Moreover, when larger bodies impact its surface, it shakes and redistributes the looser parts of its soil.

To get around these sources of confusion, the analysts – scientists from the US, the UK and Canada – devised some workarounds.

First, they focused on craters over 10 km in diameter (between the 80º N and 80º S latitudes). The diameter limit was set so high because these impacts are likely to have penetrated the bedrock and chipped off rocks from there to the surface. These rocks are warmer and remain that way for longer than those on the surface.

The researchers also figured that newer craters – formed within the last billion years – would be covered in more such rocks than older ones. This is because the longer the rocks lie around, the likelier they are to be broken up into smaller pieces by micrometeorites, the Moon’s crazy temperature shifts (which recently put paid to an intrepid cotton plant) and other disturbances.

In effect, they were left with a three-way relationship between rock abundance, rock temperature and crater age. And when they brought this to bear on data recorded by the Lunar Reconnaissance Orbiter (LRO), a NASA satellite around the Moon, they made their discovery – described richly by the chart below. 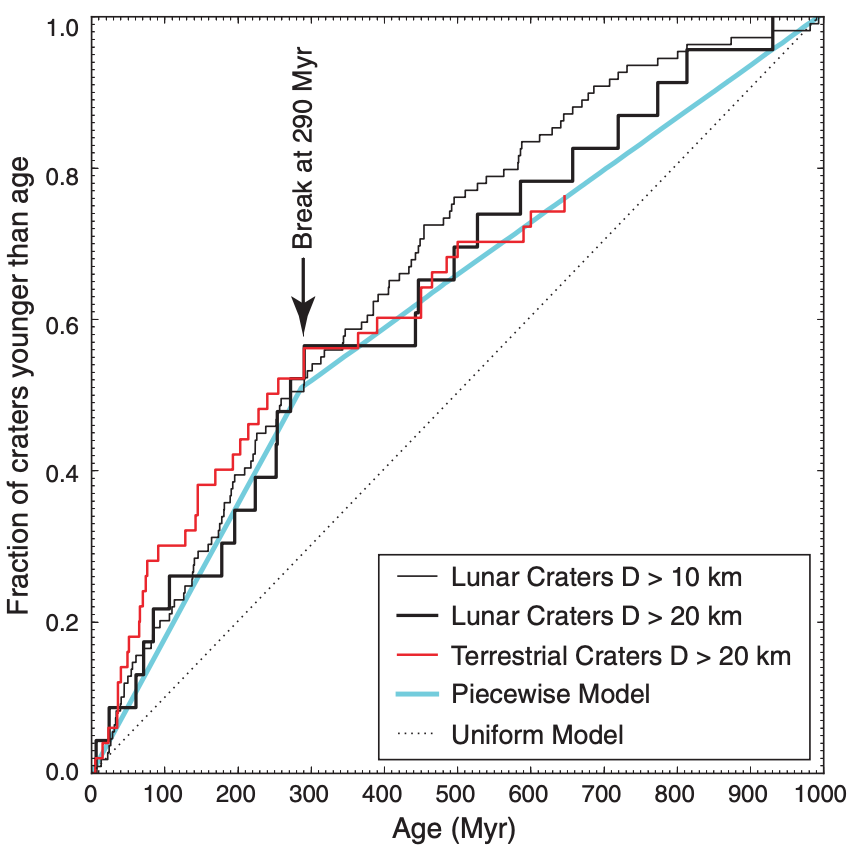 The x-axis shows the ages of craters in millions of years. The y-axis is self-explanatory, and is a proxy for time. As a first step, look at the dotted line. It’s straight because it assumes that the rate of impacts was constant throughout time. However, the researchers found that the black lines – from LRO data – suggested the real picture wasn’t as straightforward.

Instead, they think the rate of impacts is closer to the blue line, which shows a perceptible shift around 290 million years ago. Its slope beyond this point is gentler than the slope before because the cratering rate has increased, and the fraction changes less quickly as a result.

Listen to 1 billion years of #Moon impacts in 1 min. Larger craters are louder and lower pitched. Hear anything interesting starting at about 290 million years ago? Data from exciting new paper by my friend @SciCommSara (see next) @system_sounds https://t.co/SHzUaFKlN5 pic.twitter.com/QlZL90MxD9

An even more interesting feature of the chart is the red line, which depicts craters on Earth in the same period. Its flow suggests that the rock barrage that began 290 million years ago is likely going on against Earth as well.

Earth has had a storied relationship with meteors and meteorites. One of the most famous events was when a rock wider than the height of Mt Everest struck Earth 66 million years ago, wiping out all dinosaurs that couldn’t fly and triggering a mass extinction.

If the Moon’s record-keeping has been correct, this cataclysm – and other smaller ones – were part of the ongoing wave of more frequent meteoric events. But to be sure, the scientists had to ascertain that Earth didn’t have fewer impact craters before 300 million years ago because the older craters had been eroded away.

And this they did by studying kimberlite pipes. These are tubular structures about 2 km deep, commonly found embedded within ancient landmasses. They were formed when volcanoes underground exploded in supersonic eruptions millions of years ago, drilling these formations through the crust. They are rich in diamonds and are mined for this purpose.

Kimberlite pipes underwent significant erosion before 650 million years ago, during a period called ‘Snowball Earth’ – but very little after. As a proxy for the amount by which Earth’s surface eroded over time, the pipes suggest there are fewer craters on Earth older than 300 million years simply because the number of craters created since has been increasing at a higher rate.

So there we have it – the beginnings of a new mystery. Something happened in the Solar System about 300 million years ago, and Earth and its Moon have since been assailed over twice as often by meteors. We don’t yet know what this something is, but there are some ideas.

For example, the scientists suspect in their paper that the change “may be due to the breakup of one or more large asteroids in the inner and/or central main asteroid belt”. The tinier of these fragments absorb and reemit sunlight, giving themselves a small kick. As lots of fragments are kicked outward like this, they could become trapped in the gravitational fields of planets and moons, and slowly drift towards them.

Spaceflight institutions like NASA and the Indian Space Research Organisation will find this update useful because they can now recalibrate the threat to their space-based assets. They can also work with military organisations to strengthen their planetary defence systems, if any.

There’s also a second mystery here, so to speak. The scientists were able to identify the shift in impact rates 290 million years ago because they assumed there was only one such shift. It’s possible that a larger dataset, with more than the 111 craters they examined, could throw up even more shifts in the rate from a variety of causes.

This in turn could begin to reveal the full extent of the threats Earth faces, and what we can do to keep from getting wiped out.