Pending further verification, the Keezhadi excavation presents yet another thorn in the BJP's view that the Vedic people were unique. This is a poem from Paṭṭiṉap Pālai in Sangam literature (English: ‘The City and the Desert’), written between 100 BC and 100 AD. Per a rough translation, it describes a city that was by nature cosmopolitan, with ‘enlightened’ people from various nations speaking various languages and living in harmony. It may have been easy, especially two millennia ago when the poem was written, to dismiss it as the figment of a fertile imagination.

However, newly discovered artefacts at an excavation site in Keezhadi, a village near Madurai in Tamil Nadu’s Sivaganga district, seem to corroborate the ‘cosmopolitan’ claim as well as suggest the Sangam era could be 300 years older than thought.

The ‘Sangam’ describes a period from the sixth century BC to the third century AD encompassing today’s Tamil Nadu, Kerala, the southern parts of Karnataka and Andhra Pradesh, and northern Sri Lanka. It is named for scholarly congregations in and around the city of Madurai, located about 400 km southwest of Chennai. The period is noted for its Tamil literature and its literary output is closely associated with a significant politico-literary movement in early 20th century Tamil Nadu, which held that the Dravidian people could be descended from the people of the Indus Valley civilisation.

The Sivaganga discovery is the first major one of its kind in the state that claims to attest to the presence of an ancient urban civilisation in the subcontinent’s south, a civilisation that has often been pooh-poohed as political rhetoric. It also strengthens the purported connection between the Indus Valley settlers and the ancient residents of Keezhadi. 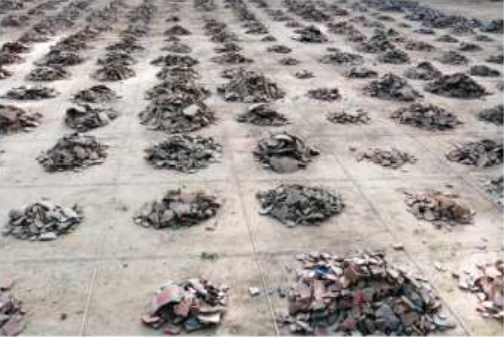 The Archaeological Survey of India (ASI) had conducted three excavations in Tamil Nadu – in 1947, 1965 and 2005 – before turning to Keezhadi. Since the first phase of excavation in 2014 here, archaeologists have found it to be a relatively more prominent site. The Tamil Nadu government’s archaeology department released the findings of the fourth phase, undertaken in 2018, calling them a “turning point in the cultural historiography of the Sangam era”. It further claimed that the urban centre in question, on the banks of the Vaigai river, is at least 2,600 years old, making it contemporary to the Gangetic plain civilisation.

The results are based on six samples collected from the fourth phase and analysed at a lab called Beta Analytic, in Miami, Florida, with accelerator mass spectrometry, a technique used to isolate rare isotopes. The data it obtained seemingly pushed the date of Tamil-Brahmi, a version of the Brahmi script used to write Tamil and which later evolved into the modern script, to the sixth century BC.

“These results clearly ascertained that [the residents of the settlement] attained literacy, or learned the art of writing, as early as the sixth century BC,” T. Udayachandran, the commissioner of the state archaeology department, said.

There are also other markings alongside Tamil-Brahmi symbols and which apparently suggest a connection with the Indus Valley civilisation. Two major studies published earlier this month, in the journals Science and Cell, suggested that after this civilisation began to decline around 2,000 BC following a cultural invasion by immigrants from eastern Europe and western Asia, its settlers moved east and south. The other markings numbered around a thousand and were dated to 580 BC. They are believed to be a ‘bridge’ between the Indus script and the Brahmi script that took shape later.

Apart from the matter of the settlement’s age, the report highlights the supposedly high standard of living in the Sangam era. The document describes “well-laid floors made of fine clay”, “roof tiles” with “grooves” to “drain water”, joints fastened with “iron nails”, etc. Archaeologists also unearthed 110 dies made of ivory, and attributed them to the Sangam people’s alleged participation in sports and other recreational activities. The report additionally discusses evidence of cattle-rearing, structural engineering, handicrafts, a local weaving industry, household utensils, and ornaments and terracotta figurines.

Seventeen pottery specimens were sent to the Earth science department of the Pisa University, Italy. A mineral analysis there indicated that the Keezhadi people’s earthen vessels had been produced by the same technique and with the same mineral composition for four centuries from the sixth century BC. Researchers were also able to find materials from other parts of the subcontinent of similar make-up, suggesting the people of Keezhadi “exchanged goods between neighbouring regions, probably through traders, craftsmen and visitors”.

For writers and activists like Su Venkatesan, the CPI(M) member of Parliament from Madurai constituency and a vocal proponent of the Keezhadi excavation, the findings are vindication.

“Since the first excavation … in 2014, we have been saying that it was a fertile urban civilisation and that the entire area should be excavated for at least ten to fifteen years,” he told The Wire. “Year after year, we have been proved right and now stand vindicated.”

An aerial view of a wall-like structure at the Keezhadi site Photo: Tamil Nadu government

The second phase of excavation, led by Amarnath Ramakrishnan, then a superintendent with the ASI, dated the start of the Sangam era to 290 BC. Venkatesan was miffed, however: “The carbon samples were taken at [three] metres in a six-metre-deep pit. There were three more metres [to go] and more samples [to be] recovered from there. But despite our demands to send it for examination, the Centre refused to do so citing various reasons, including financial ones.”

Venkatesan thought this specious. The ASI transferred Ramakrishnan away after the second dig and shuttered the project after the third, citing a lack of findings. This prompted a furore in Tamil Nadu, so the state government stepped in with Rs 40 lakh to continue the Keezhadi excavation. The findings of the fourth and fifth phases, especially that the Sangam era could be 300 years older than presumed, thus carry a prominent vindictive flavour. Venkatesan even called it a “strong scientific rebuttal” to the ASI, and the Centre by extension. The state government also set aside Rs 50 lakh for the excavation last year and has already earmarked Rs 47 lakh this year.

The Bharatiya Janata Party (BJP) at the Centre has passively condoned claims that the Vedic people, who displaced the original population of the Indus Valley, were homegrown and that they migrated outward to populate western Asia and eastern Europe. The Science and Cell papers supported the opposite conclusion, but that didn’t stop one of their authors, Vasant S. Shinde, from holding a press conference where he reinterpreted the papers’ conclusions to suit the BJP’s narrative of choice. Now, and pending further verification, the Keezhadi excavation presents yet another thorn in the BJP’s view that the Vedic people were unique.

“To me, the findings forcefully emphasise the need for further and more expansive study,” Venkatesan said. The fifth phase is currently on and experts believe more discoveries are in the offing, including – as they hope – of industrial activities that findings from the second phase suggested.