For a long time, scientists were almost certain there was water on the Moon. They couldn't be absolutely sure until Chandrayaan 1 came along. 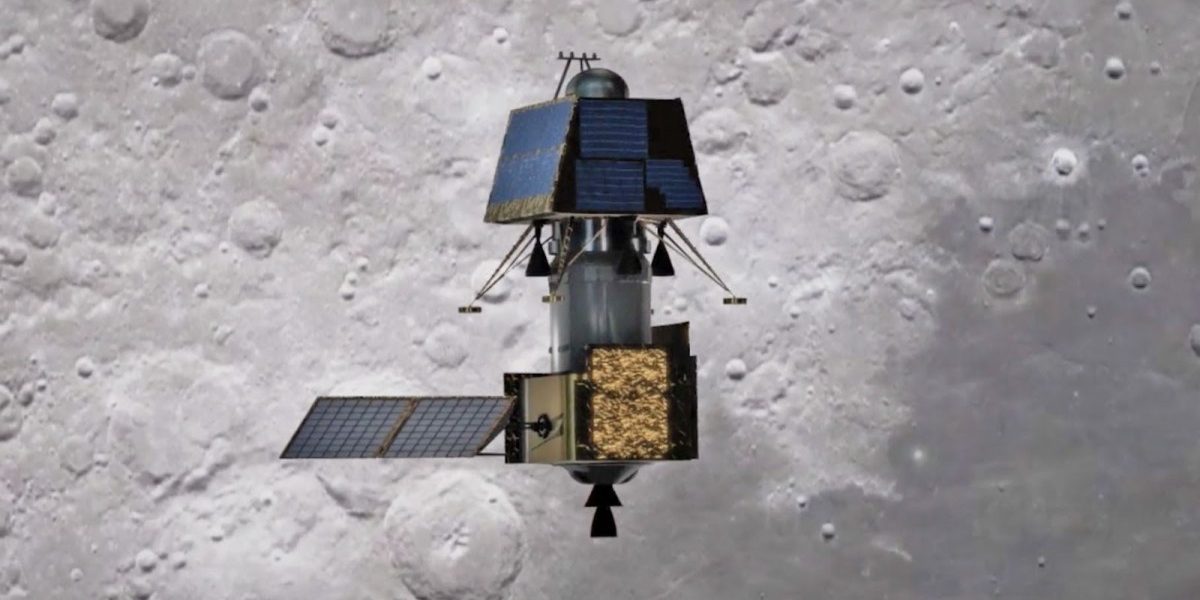 An artist's impression of Chandrayaan 2 cruising above the Moon. The Vikram lander is still connected to the orbiter at this point. Image: ISRO

After decades of work, scientists used Chandrayaan 1 and NASA’s LCROSS to finally discover water on the Moon in 2009. In the 10 years since, the next step has been to understand the exact nature of and the amount of water the Moon hosts. This is where NASA’s LRO and Chandrayaan 2 come in.

For most of the 20th century, scientists argued the Moon’s surface was bone-dry. The 382 kg of rock and soil samples the Apollo missions brought from the Moon to Earth attested to this. When they did find traces of water in the samples, scientists dismissed them as contamination. The Moon has a very thin atmosphere, so any water on its surface is exposed directly to the vacuum of space, and evaporates. And due to the Moon’s low gravity, water vapour quickly escapes into space.

However, there are certain regions on the Moon that haven’t received sunlight for more than a billion years, and where scientists think the water can be. On the lunar poles, the Sun is very close to the local horizon throughout the day so even a small feature, like a rock, can cast very long shadows. Likewise, large craters with terraced edges can easily block sunlight from entering the crater, so sunlight is blocked for 360°. Such places are eternally dark and are called permanently shadowed regions (PSRs).

But where could the water have come from?

Scientists know that comets and many types of asteroids contain water. For most of the Solar System’s existence, these objects have been bombarding planets and their moons at a vigorous pace. This is why the Moon is covered in craters, and scientists think the asteroids and comets responsible for them could have deposited water on the Moon. They have proposed that some fraction of this water could have found its way into PSRs, where – like sitting inside a refrigerator – they could’ve been preserved for billions of years.

In 1994, NASA launched the Clementine lunar orbiter. Its Bistatic Radar Experiment beamed radio signals straight into the PSRs. The signals bounced off the PSRs and were received by ground stations on Earth. Scientists found the nature of the reflected signals to be consistent with water ice, although they couldn’t be 100% sure.

NASA sent another orbiter in 1998, called the Lunar Prospector, to find out if there was water ice in the PSRs. Its neutron spectrometer found that the number of neutrons in the soil corresponded with the presence of hydrogen atoms. Could these hydrogen atoms be part of water molecules?

Armed with Clementine and Lunar Prospector data, scientists were almost certain that there was water on the Moon, but they needed to be absolutely sure.

Water on the Moon indeed

In 2008, India forayed into planetary exploration with the Chandrayaan 1 lunar orbiter, for which ISRO solicited instruments from scientists around the world. NASA pitched and built two of these, named MiniSAR and M3.

The Miniature Synthetic Aperture Radar (Mini-SAR) also found that the PSRs reflected signals in patterns consistent with water ice, from more than 40 polar craters. But just like with Clementine, the data wasn’t 100% certain. The Moon Mineralogical Mapper (M3), an infrared spectrometer, would go on to clinch the prize. M3 detected not just water in the PSRs but could also differentiate between ice, liquid water and water vapour based on how the surface absorbed infrared light. M3 confirmed that the Moon hosted water once and for all. The Chandrayaan 1 orbiter also carried an impact probe – a craft that intentionally crashed near a PSR on the Moon’s south pole. As it descended, its mass spectrometer instrument detected water molecules in the thin but persistent lunar atmosphere.

However, ISRO didn’t publish the results until NASA announced that Mini-SAR and M3 had discovered lunar water. ISRO then claimed that their instrument had detected water on the Moon first.

All this time, scientists had been developing ideas about how the Moon could have water on other parts as well, not just at or near the poles. The Sun emits a constant stream of protons, some of which strike the Moon. Most of these protons are reflected into space but some are absorbed. Scientists thought the oxygen in the soil could interact with the absorbed protons to produce water, and that they should be able to detect the water molecules from orbit. 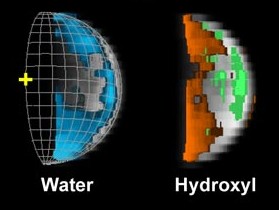 Detection of water-bearing and hydroxyl-bearing minerals on the Moon by Cassini’s infrared spectrometer. Photo: NASA

NASA’s Cassini spacecraft flew by the Moon in 1999, en route to Saturn. Its infrared spectrometer found water-bearing minerals at most latitudes on the Moon, with a higher concentration at the poles.

The results were in stark contrast to the bone-dry Apollo samples. One reason could be that most Apollo landing sites were near the equator, so high daytime temperatures at these sites might have evaporated the water. However, they didn’t publish the findings for a decade, until Chandrayaan 1 happened.

In addition to water ice in the PSRs and water molecules in the lunar soil, M3 found a third water source, which came as a surprise. M3 had imaged the Bullialdus crater, one of the many large craters that boast central mountains. These mountains contain material excavated from deep within the Moon’s crust. 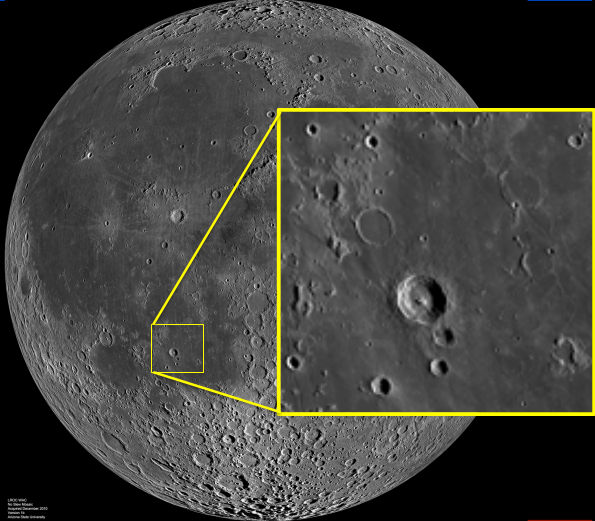 Location of the Bullialdus crater on the Moon. Its central mountain is visible in the zoomed inset. Photo: Klima et al

M3 found water-bearing minerals in the central mountain but not in the area surrounding it. These traces of water informed scientists’ ideas about the Moon’s interior.

Scientists now knew that the lunar soil does hold trace amounts of water even in the non-polar regions. Note that it’s still less water than the driest deserts on Earth. But the PSRs at the lunar poles host appreciably more water.

In 2009, NASA launched the Lunar Reconnaissance Orbiter (LRO). It also detected water ice on the lunar poles using both the onboard radar and the neutron spectrometer. LRO has been orbiting the Moon for over 10 years now, longer than any other orbiter. The LRO team has published an extensive atlas of PSRs, laying the groundwork for future exploration and settlement on the Moon.

Like Chandrayaan 1’s impact probe, LRO carried an impactor too, called LCROSS. In 2009, its upper stage deliberately impacted one of the PSRs on the lunar south pole. The other half of LCROSS followed and studied the plume of moondust the crash kicked up. It was found to contain 155 kg of water. 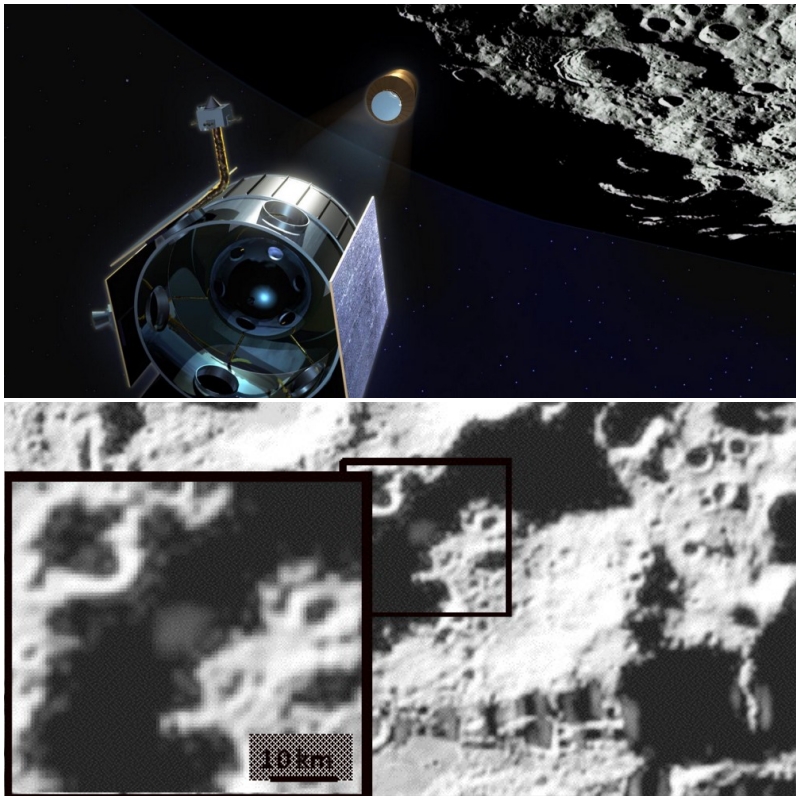 From this result, scientists estimated all the PSRs together contained more than 600 billion kg of water ice, equivalent to at least 240,000 Olympic-sized swimming pools.

The Chandrayaan 2 orbiter’s instruments intend to extend our knowledge of water on the Moon. They include an enhanced infrared spectrometer and an upgraded radar, called the DFSAR.

The infrared spectrometer will build a global, high-resolution map of water concentrations in the lunar soil and determine which water-bearing minerals are present. Chandrayaan 2’s long-term observations aim to discern how the water content in the lunar soil changes in response to the lunar environment.

The DFSAR will map the water ice in the PSRs. With twice as much penetration depth and higher resolution, DFSAR will quantify the amount of water trapped in these cold regions, something no one has adequately done yet.

The lunar science and exploration communities agree that we can harness water ice on the Moon for future lunar habitats. Using solar power generated by the habitats, we can also split the water ice into hydrogen and oxygen for use as rocket fuel. To that end, Blue Origin, the spaceflight company owned by Jeff Bezos, has snagged a $10 million NASA contract for their lunar lander.

But before we plan habitats at the Moon’s poles, we need to know more about the nature of water ice in these regions. The LRO and the Chandrayaan 2 orbiter are expected to fill these gaps.

ISRO chairman K. Sivan has said the Chandrayaan 2 orbiter will operate for seven years – ample time to fully map and quantify water on the lunar surface. However, let’s not forget that Chandrayaan 1 had a design life of two years but failed after only 10 months.

Surface missions that explore PSRs, like NASA’s canceled Resource Prospector rover, are the next logical step towards sustainable habitats on the Moon. As we develop technologies that tap into water ice, we can colonise not just the Moon but the whole Solar System. We should be glad our nearest neighbour has plenty of it; we can’t keep dragging everything out of Earth’s gravitational pull for eternity.