Some have wondered if the figure could be a ploy to encourage efforts to maintain ISRO's 'hero' status and distract from what Vikram's failure really means for the mission.

Prime Minister Narendra Modi interacts with ISRO scientists after the communications link with the Vikram lander was lost on September 7. Photo: PTI

On September 7, the Chandrayaan 2 mission experienced a setback after its Vikram lander failed to complete its autonomous descent over the lunar surface. Instead, remote observations suggest a thruster anomaly caused the lander to tumble out of its designated path and fall a short distance away. Scientists at the Indian Space Research Organisation (ISRO) are still trying to ascertain if they can salvage the lander, and the rover housed inside it.

After it became clear that Chandrayaan 2 would have to continue without its surface components, political leaders, celebrities and others congratulated ISRO on having come this far and expressed their solidarity with its efforts.

In this midst of this hubbub, K. Sivan, the chairman of ISRO, as well as others proclaimed that despite Vikram’s failure, Chandrayaan 2 had completed “90-95%” of its stated objectives. Considering its authoritative provenance, multiple individuals online and off have shared this figure as proof of ISRO’s accomplishments.

One of them was K. VijayRaghavan, the principal scientific adviser to the Government of India. “I got the figure from ISRO,” he said, adding that they assign “percentage values for completion” to “all their projects”. “Long-standing mechanism, I understand.”

The sharers’ earnestness also paralleled less obvious, but nonetheless visible, efforts to paint ISRO as a great organisation and Sivan as a hero, including via hagiographic reports in the press about his ‘rags to riches’ story.

There is an obvious undercurrent among those discussing this about how to interpret a failure. Everyone agrees that damage to hardware or unexpected results are part of the enterprise. The contentions are centred on how leaders should respond and whether political forces were involved.

Also Read: ‘There Is No Communication With the Lander. It Is as Good as Lost. There Is No Hope.’

For starters, not everyone can agree on how these numbers were calculated. Unlike the Mars Orbiter Mission, for example, Chandrayaan 2 is not simply a technology demonstrator – although it did have technologies to demonstrate; it also had important logistical and scientific objectives. However, the latter hadn’t yet commenced at the time of Vikram’s fall, so what could “90-95%” refer to? 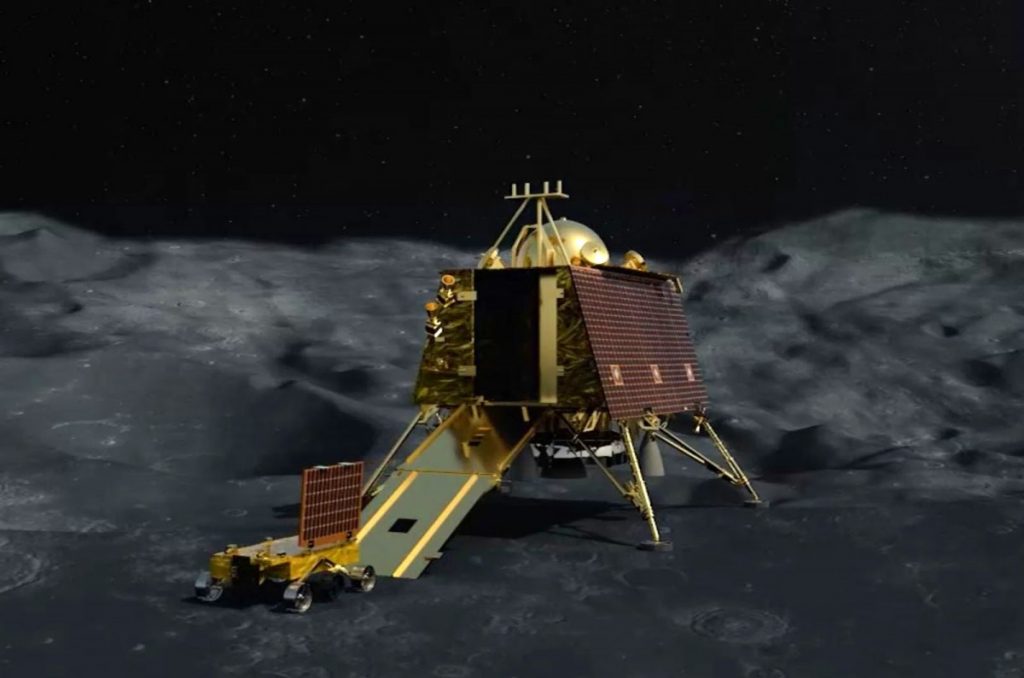 One possibility is that the numbers represent stages the mission has passed. “In all space projects, success percentage is assigned to each stage,” said Arup Dasgupta, former deputy chief of ISRO’s Satellite Applications Centre, Ahmedabad. “I understand NASA also has the same practice. I remember with the PSLV – just getting the rocket onto the launch pad counted” for a certain percentage of success.

Amal Chandran, associate director of the Satellite Research Center, Nanyang Technological University, Singapore, backed this up. “Just to give an example, we define satellite delivery to [launch vehicle] as 30%; surviving launch and early operations constitutes 50%; six months’ successful operations constitutes 80%; and achieving baseline science goals” – which he said is defined on “very basic” terms – will constitute 100%.”

He clarified that he “generally hated these metrics” but that they were necessary “to define a success matrix to the funding agency”.

In this case, ISRO is funded by the government. But while it is not clear if the government requires these numbers, some suspect the vagueness surrounding them could be intentional.

“Perhaps if the project management measures and weightage had been spelt out clearly,” together with how ISRO arrived at ‘95%’, “even before we have received data on the scientific missions and while there is still a year at a minimum to go, it would have made sense,” said Raju Prasad, chief business officer of Exseed Space, a private satellites company in Mumbai. “As of now, it looks like political bluster, not even a project management measure, let alone science.”

One scientist who didn’t wish to be named speculated that Sivan could simply have used the “90-95%” figure as a way to apprise Prime Minister Narendra Modi, who was in the same room following Vikram’s progress on September 7, or Indians at large of what they should take away. Others wondered (in confidence) if the figure could be a ploy to encourage efforts to maintain ISRO’s ‘hero’ status and distract from what Vikram’s failure really means for the mission.

For example, one view is that characterising Chandrayaan 2 as a “90-95%” success implies the lander and rover constituted only “5%” of the mission. This would be unfair as well as disingenuous because for as long as observers expected Vikram would successfully land on the Moon, few paid the orbiter much attention. But when Vikram took a tumble, the orbiter became a big deal. 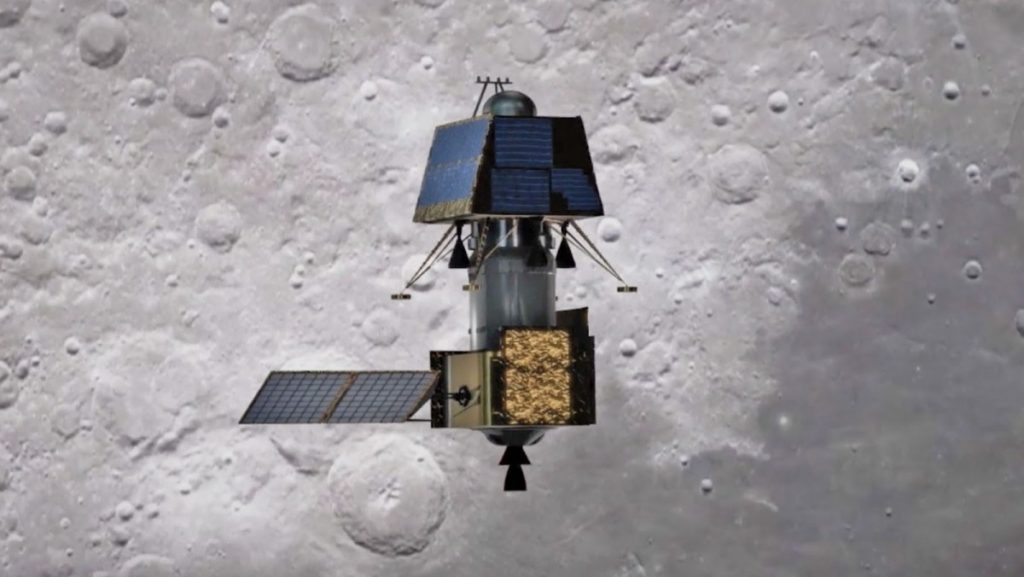 An artist’s impression of Chandrayaan 2 cruising above the Moon. The Vikram lander is still connected to the orbiter at this point. Image: ISRO

“No one cared about the orbiter until now. The mission was sold, and I think rightly so, as the lander and rover,” Jayant Murthy, a senior scientist at the Indian Institute of Astrophysics, Bengaluru, said. “Now, we are trying to downplay that. I think we should just say, ‘We didn’t put the lander down. Time to move on and make the best of what we have.'”

To be sure, the orbiter was always an important part of the mission. Apart from assisting the lander/rover in communicating with ground control, it carries eight instruments, including a state-of-the-art radar expected to provide new data about the lunar south polar region.

“If this had been a communications mission, I could say 95% of the transponders worked,” Murthy continued. “How do I assign percentages here? As a function of the total number of parts, or working hours?”

Also Read: With Chandrayaan 2 Setting Sail, What Will India Put on the Moon Next?

Even others believe the exculpatory rhetoric could be designed to lower the expectations of the mission, casting its achievements thus far in better light. This has typically taken the following forms: to say that Vikram got really close, that Vikram is intact after having plummeted for 2 km, even that Chandrayaan 2 was never about the science.

Though these arguments are easily rebutted, they also reflect a popular tendency to fixate on the technological objectives and not nearly enough on the scientific ones. Put another way, is anyone interested in what the scientific payload onboard the orbiter will do?

Many space scientists (to whom this correspondent has spoken) are already disappointed, cynical or both about the way ISRO has executed or will execute scientific missions. Two common issues they – most of whom requested anonymity – had were that ISRO personnel don’t think about what scientific instruments can be included until after the spacecraft has been designed, and that while India has been building the next generation of rockets, it lacks the capability to design and manufacture advanced payloads. One of them elaborated:

ISRO is used to a more incremental philosophy, where they work on their priority list and can put together a mission from scratch in two or three years because the design is well-known. They do not understand that science missions involve unique components that may take a year or longer to procure.

This is partly why the Mars Orbiter Mission, the last major interplanetary mission before Chandrayaan 2, wasn’t as significant as its hype would suggest (though it was significant nonetheless). It was a technology demonstrator and its primary goals didn’t include science, even though it supported the publication of at least a dozen papers. The last major science mission was AstroSat, the data from which contributed to at least 78 papers.

Chandrayaan 2 is also a scientific mission. Its primary purpose won’t be fulfilled until we know its instruments worked as planned and until they have yielded useful observations of the designated quality. Since the orbiter is now expected to be operational for over seven years, there will be a long time to test its scientific mettle. At the same time, it is safe to say that nearly 0% of its scientific mission has been completed as of today.

As if to iron the aforementioned kink out, one of the scientists told The Wire:

ISRO is trying to start a science dialog now with space scientists but the process is flawed, largely because of the incompetence of the [Space Science Program Office]. Their committees are filled with people over 80 [and] the reviewers are part of the proposals they review, which is highly unethical.

Murthy hoped that ISRO would continue this effort – which he, for his part, called “sincere” – “but with more balanced review panels that are more familiar with the science problems of today and instrumental experience relevant to scientific missions”.

Also Read: Why Chandrayaan 2 Was a Success Well Before ‘Vikram’ Got to the Moon

One of the unnamed scientists also raised the question of measuring scientific output. When the government wishes to increase Indian scientists’ research output, it could – among other things – associate scientists’ career advancement prospects with the number of papers they publish. However, despite the fact that it is also a research body funded entirely by the government, ISRO and its scientists have thus far not been asked to publish a minimum number of papers arising out of space-science missions.

Experts have suggested this is both good – because it is a symbol of the government’s uncommon trust in scientists to judge what needs to be in a paper – and bad – because there is no sense outside academic corridors of how well the scientific missions are doing.

Now, all eyes are on the orbiter, especially since it has allegedly been able to photograph Vikram lying on the Moon’s surface. It is arguably harder to sensationalise the orbiter’s operations, certainly to the extent of Vikram’s theatrics, but both logic and nationalism dictate that India’s pride of Chandrayaan 2 should extend to the orbiter’s scientific mission as well.