How to React to Stupidity at the Science Congress

Perhaps the BJP government has thrown the field open to anyone who can craft a call to conservatism in a way that sticks to the parivar's ideological line.

Load Twitter on the browser. Scroll down, scroll down further, keep going, stop… What’s that?

#WATCH: GN Rao,Vice-Chancellor Andhra University at Indian Science Congress y'day in Jalandhar:How come Gandhari gave birth to 100 children?Stem cell research was done 1000 yrs ago in this country,we had 100 Kauravas from one mother because of stem cell&test tube-baby technology. pic.twitter.com/C9nlaYwB7p

Correlation is not causation – but it’s really hard to set aside the fact that India’s ruling party has empowered a clutch of people to vocalise their pseudoscientific beliefs without fear of ridicule, leave alone consequence. When you hear a person in any kind of leadership position utter unscientific, ahistorical nonsense, you used to be able to laugh and uninhibitedly point out that they’re wrong.

And then you read news reports about how people are being arrested for being sharply critical of the prime minister or for innocuous comments on social media targeting ministers and politicians. You read about vice-chancellors, judges and ministers balking at the slightest insult yet freely dismissing reason and civil liberties in single sentences. You keep your Twitter timeline clean to escape the attention of a wandering troll army, many of whose foot soldiers the prime minister himself follows. You watch your language closer than before, almost as if a syntax-obsessed linguist might.

When someone gets on stage and says something stupid, you no longer see one face. In the visage of G.N. Rao, the Andhra University vice-chancellor asserting at the Indian Science Congress that we had stem-cell technology and test-tube babies thousands of years ago, you see The System glaring down at you. And you swallow the laughter.

But of course, the Bharatiya Janata Party, the Rashtriya Swayamsevak Sangh and their satellite outfits haven’t caused any of this because they haven’t actively directed one event after another. What you’re seeing is just a correlation, a remarkable coincidence but a coincidence nonetheless. If you think there’s causation, then it’s in your head, you liberal, antinational punk.

So you aren’t just silenced. The phantasmal force of the backreaction reaches into you and invites you to reconsider your opinions. Why did G.N. Rao, who sits at the very top of a state university, say what he did? You recoil from the simplest answer: that he’s stupid. (He says we had stem-cell and IVF tech because “the Mahabharat says hundred fertilised eggs were put into hundred earthen pots”.) But then he can’t be stupid; it must be something else.

Maybe Rao simply meant it as a metaphor – as an allegorical explanation for a complicated subject, something he alludes to in the clip. And maybe Narendra Modi was trying to be funny when he said we had plastic surgery thousands of years ago when we fixed an elephant’s head on a human body. Maybe that Rajasthan high court judge was simply illustrating his devotion when he declared peacocks don’t have sex but procreate through tears. 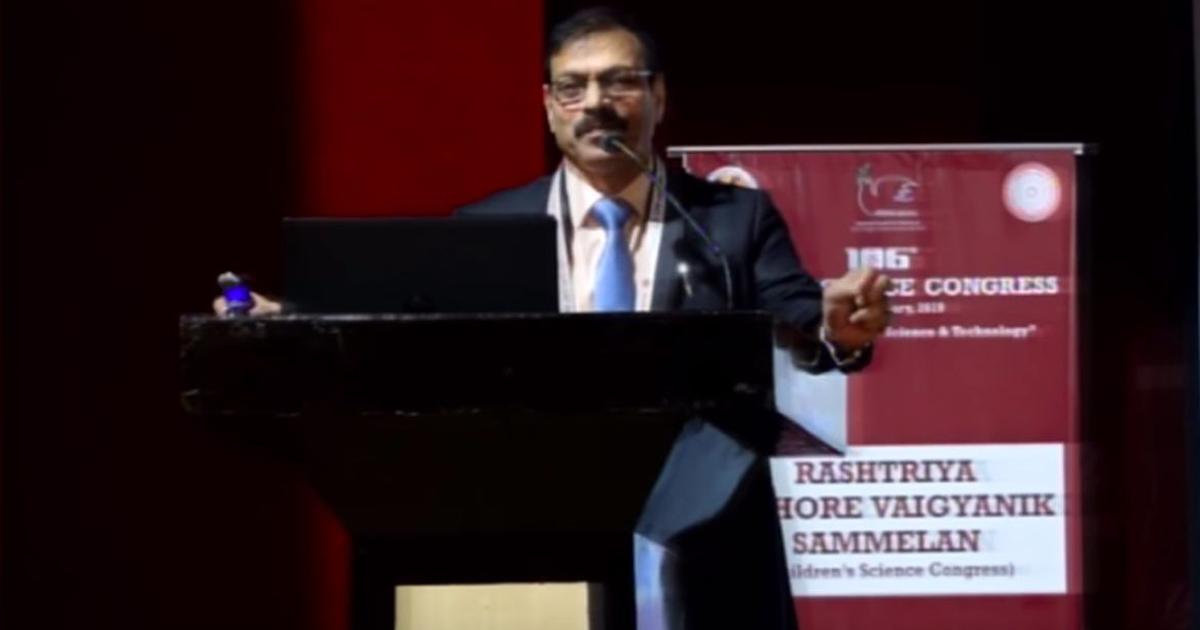 Maybe Satyapal Singh was on the cusp of a new philosophy of science when he said monkeys didn’t turn into men because his grandparents didn’t have a story about it. Maybe Harsh Vardhan was only musing about unknown unknowns when he said Stephen Hawking believed the Vedas had a better “theory” than E = mc2. But wait: the buck stops with the science minister, and when he’s crossed the line, it’s definitely not a metaphor.

What else could it be? Perhaps the BJP government has thrown the field open to anyone who can craft a call to conservatism in a way that sticks to the parivar‘s ideological line, finds traction among the people and makes news. The best craftsperson is then chosen and granted one ‘boon’, to use Amar Chitra Katha’s favourite word for wishes granted by the gods. This franchisee model of nationalist expression would explain former ISRO chief Madhavan Nair’s comment that two women entering the Sabarimala temple at night was a “government-sponsored act of cowardice”.

Also read: A Science Minister – and an Event – That Insults Indian Science

Or maybe those of us discomfited by an ecosystem that quietly tolerates and normalises increasingly offensive statements are in fact the cynics we’re often told we are. Cynicism, and the disengagement with public politics that it encourages, is a privilege. Many of us can stop fighting for what we believe is right and shrink into a life no different for it – but most of us can’t. At the same time, cynicism is hard to shed when it is consistently rewarded. You decide to hope when the government appoints an excellent principal scientific advisor – and feel snubbed when a senior educational administrator can’t see the national science congress as anything more than a spitball range. (And he isn’t alone.)

Just like that, we’re left navigating a tangled web of excuses we’re forced to make for The System if only to avoid confronting the abject incompetence at its centre. Correlations jump up at us everywhere we look but we resist the cynical temptation to see causes instead.

Don’t be a cynic; there are scientists and teachers doing good work in other parts of the country. Let’s hope that much continues to stay true.