How Happy Is the Scientific Workforce in India?

Moved by a growing sense of unrest within the academic workforce, and a simultaneous explosion of articles discussing stress in academia in the western world, researcher Laasya Samhita investigates the scenario in India.

The need of the hour seems to be open and easy communication across all levels. Photo: Flickr 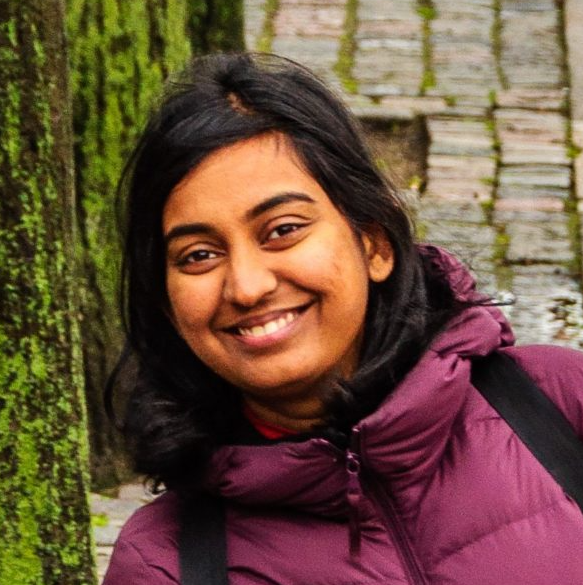 ‘It’s different’. How often has one of us found ourselves proclaiming this while talking to non-academics about our daily work? It can be hard to explain aspects of academic life to an outsider: ‘No, my experiment hasn’t worked the fifth time either’; ‘Umm yes, it might be useful’; ‘I can’t say when I will finish, my mentor doesn’t know either’ – and so on. While these examples may sound frivolous, a high rate of experimental failure, shifting goalposts and long hours of isolated work can be stressful.

Add to this the fact that academic work is built on criticism of each others’ work and we have with us a system where positive reinforcement becomes necessary for personal well-being. This is where we seem to be doing poorly.

Stress in academia has been much debated, particularly in the last five to ten years, but the solutions remain elusive. Within the Indian scientific community, we are only just beginning to gather data on the extent of the problem. A preliminary survey was conducted among Indian ecologists last year during the Student Conservation on Conservation Science (SCCS).

In this survey, 58% of the respondents reported negative interpersonal interactions, of which 40% was with supervisors and 36% with colleagues. We have only anecdotal information about what is perceived as stressful by the academic workforce.

Discussions on such topics tend to stay within student/postdoc communities and run out of steam as daily academic concerns take over. Why do PhD students and postdocs feel stressed at work on a regular basis, and what do they think will help make academic life happier?

Through an online survey, I asked students and postdocs (primarily biologists) across several institutes in Bangalore and Pune (National Centre for Biological Sciences, Instem, Indian Institute of Science, Jawaharlal Nehru Centre for Advanced Scientific Research, Indian Institute of Science Education and Research and National Centre for Cell Science) this: what is the one thing they would change in their academic lives if they could.

Figure 1: Responses to the question – how would you change your academic life if you could?

Over half the participants (274 out of 400) answered this specific question. When someone listed two different aspects they would like to see changed, both were counted, and all sub-categories that people brought up are listed here to present a full picture. The two highest categories are outlined in black (Fig. 1).

While specific concerns were slightly different across PhD scholars and postdocs (Fig.2 shows the top 5 concerns among students and postdocs), three aspects stood out in both categories: a sense that monetary compensation was inadequate, troubled relationship with the Principal investigator (PI)/lab head, and the perception of a negative work environment (such as stress, an unhealthy hierarchy and feelings of exploitation). Let’s see if we can get behind these a little bit. 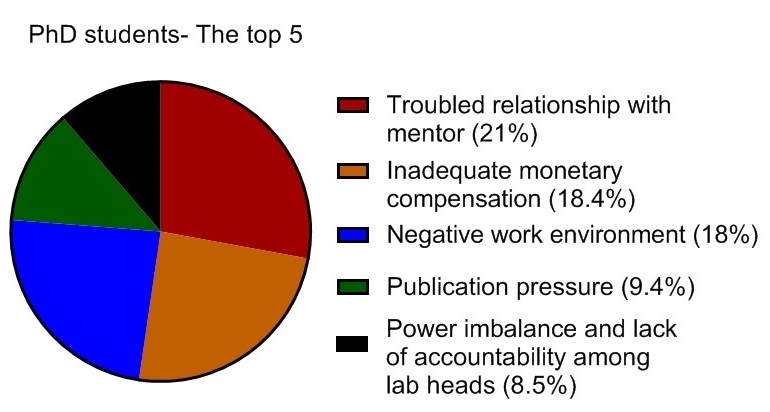 Figure 2: Top 5 concerns found among PhD students in the survey

Both students and postdocs perceived their salaries as inadequate in comparison with what they could earn elsewhere.

To compare the salary of a fresh biology MSc holder in a PhD program vs outside of it, I spoke with people involved in hiring or running a team across five industry types applicable to biologists. This covered pharmaceuticals, medical writing, medical consulting and bioinformatics, R&D in a biotechnology company and BPOs – the last being a generic source of employment (all requested anonymity).

The starting salary for a fresh MSc holder across these industries is in the range of Rs 22,000 per month (p.m.) but can go as high Rs 37,000 p.m. These incomes are taxable and will on average be lower than the latest DST-mandated starting salary of a PhD student which is Rs 31,000 p.m, (not taxable). On the other hand, five years later, towards the end of a PhD,  the PhD stipend after a single hike will be at Rs 35,000 p.m., while the person who went into the industry can be earning 45,000 p.m or more depending on performance and career transitions.

Also read: A Billion Candles: Is There an Indian Way of Doing Science?

Also, all outside salaries carry inflation-adjusted increments, something that is missing in PhD and postdoc compensations. What about other benefits? People employed on a non-contract basis by companies qualify for provident funds and gratuity, which PhD students don’t get. On the other hand, many academic institutions provide subsidised food and accommodation, which the other group doesn’t have access to. These examples show that the situation is not a hands-down win for industry salaries at the start; but the longer the duration of the PhD, the higher the gap is likely to get.

Figure 2(B): Top 5 concerns found among Indian post-doctoral candidates who took the survey

For postdocs, working within the industry is advantageous right from the start, the difference being Rs 47,000 p.m.(Research associate/RA-I at research institutes) vs Rs 65,000 p.m in industry, both taxable.

Again, within two years, people who opted for non-academic jobs post PhD will likely be at much higher salaries. Both for students and postdocs, specific competitive awards and grants can skew this comparison for a minority. Whether largely government-funded academic stipends can be reasonably compared with industry, is a separate debate, and is not being addressed here.

Respondents to the survey reported a lack of approachability, feelings of exploitation, personal conflict with their PIs and anxiety that such conflict could mar their future prospects. Several respondents perceived a ‘power imbalance’ in the academic system.

Conflict with superiors in the workplace and lack of work-life balance is not a problem unique to academics. People who move from academics to non-academic careers have an insight into how the two environments tackle power imbalance. “Academics needs more transparency in advisor-student relations,” feels Namitha Kumar, director of medical communications at Strand Lifesciences, a biotech company based in Bangalore. “I feel that behavioural accountability at all levels is well-handled in the corporate system”.

There is often an implicit expectation in academia that one is expected to be in the lab on all public holidays and weekends.

An overwhelming number of people reported issues with their academic career.

“I loved the freedom that academics gave me in terms of flexible work hours, but wasn’t too happy that I had to give up holidays and weekends in return,” says Anusha Krishnan, freelance science writer and editor. “I miss the intellectual stimulation of discussing a publication or experiment…[however]… I do not have to make excuses for having to take a day off to tend to household chores or a visit to the doctor on my children’s behalf”.

The message that more work means better work, appears to have been communicated to the academic workforce from their superiors. This insidious expectation is particularly surprising in a field that is supposed to encourage creativity and free thinking. Several jobs demand hard work and occasionally require work on holidays, but companies have policies set in place for overtime pay as well as a check on such extra work if it becomes frequent.

Corporate work environments typically have a human resources (HR) department, which performs a support function, and deals with employee wellbeing. In the last ten years, many companies have adopted a monitoring policy called ‘360-degree feedback’. This involves an assessment comprising four components: an appraisal by self, peers, subordinates and superiors. The overall feedback includes a behavioural component and is reviewed before decisions on promotion or progress are made. 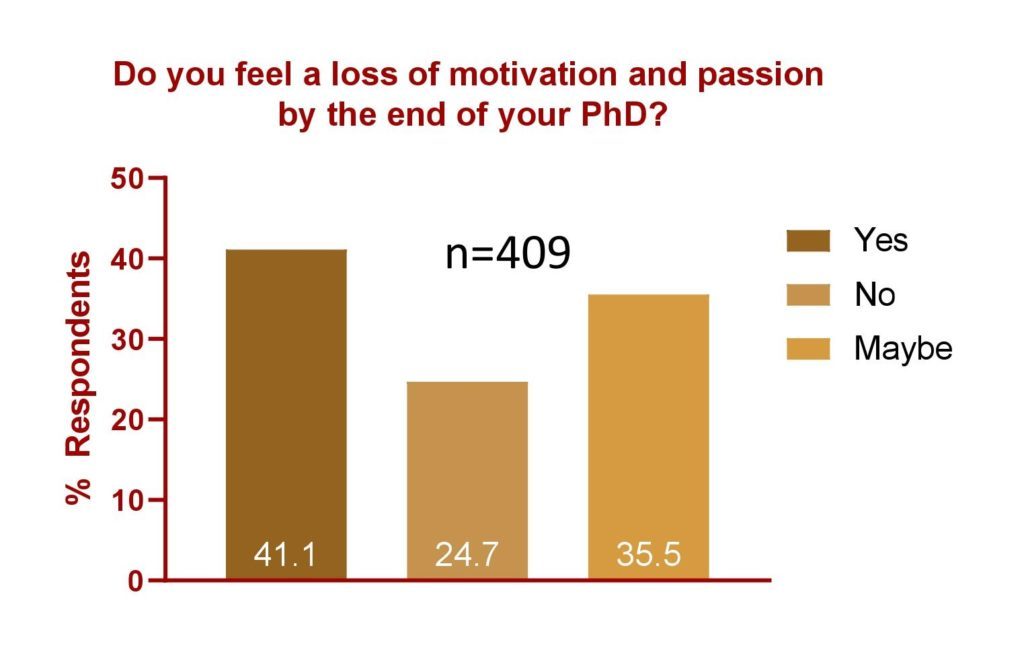 More results from the survey.

In fact, some academic environments in the humanities have adopted a similar system but the experiences of Indian academics show that we have a long way to go. Such feedback from all rungs of the hierarchy seems to be absent in scientific research laboratories worldwide (there might be specific exceptions that I have missed), and in India. Faculty appraisals are purely academic and include no feedback from subordinates. Having a separate department or set of people with the power to address behavioural concerns accomplishes several things.

First, it makes it easier for people to bring up difficulties without fear of repercussions. Second, it can help set in place clear behavioural boundaries defining abuse or unacceptable behaviour. Third, it can serve a function similar to ‘placement’ by increasing exposure to non-academic careers; realistically this is what the majority of the workforce will transition to.

Also read: The Scientist as Rebel in the Indian Cultural Milieu

“It would have really helped to have training on general skills needed for a future career in science or industry – e.g. people management/leadership courses, networking, performing effectively in teams,” says Madhurima B.R, research project leader at Roche Lifesciences in Basel, Switzerland.

In summary, an HR-like body looking after the well being of researchers is much needed in academics. There are examples of initiatives to this end by some institutes abroad, such as at EPFL in Switzerland.

Thorough surveys, ideally with institution-specific inputs (since there is so much variation in the way different research institutes work in India), inputs from lab leaders on their expectations and problems, and better communication are all needed on the road to getting better. But let’s not lose sight of why we chose to be here in the first place. 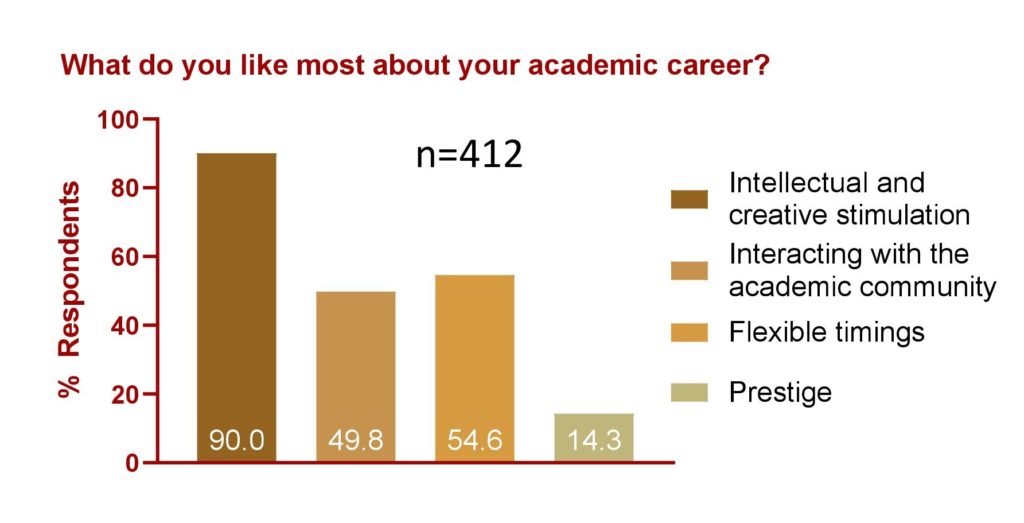 Is your reason for being in academia covered here?

An overwhelming ~90% of the people surveyed identified ‘intellectual and creative stimulation’ as what they liked best about academics, and ~50% chose ‘interacting with the academic community’. “There is a frankness in academia where criticism is taken positively and worked on. I find that missing in the non-academic world and am often deemed “rude” for giving honest feedback” says Pritesh Dagur, Founder and Art researcher at Art’zire.

Clearly, young people entering academics can find themselves confronted with expectations and work environments that are quite different from their idealistic view of science. For those with limited internal and external sources of support, the experience can be a harsh one. As institutions move to provide support for mental health such as access to professional counselling, the need of the hour seems to be open and easy communication across all levels. Incorporating feedback from the workforce when a PI is assessed for promotion or tenure would mark a big step ahead.

For too long, we have focussed on the differences between academia and other professions. In doing so, we may have overlooked the fact that office or lab, people are fundamentally the same. We all have similar core expectations from our work environments; we want job satisfaction, work-life balance, potential to prosper in all respects and a positive work environment. Perhaps keeping this in mind will help us enjoy the real ‘differences’ that drew us all to academics.

Laasya Samhita is a Wellcome-DBT postdoctoral fellow at the National Centre for Biological Sciences (NCBS), Bangalore. She explores why mistakes might be good (in bacterial proteins), and tries to combine a love for molecular and microbial evolution with a passion for communication and detective fiction.

This article was published on The Life of Science. Read the original here.