Viruses can't replicate on their own, so they infect other organisms and hijack their cellular machinery to produce viral offspring. To defend themselves, bacteria evolved CRISPR/Cas. 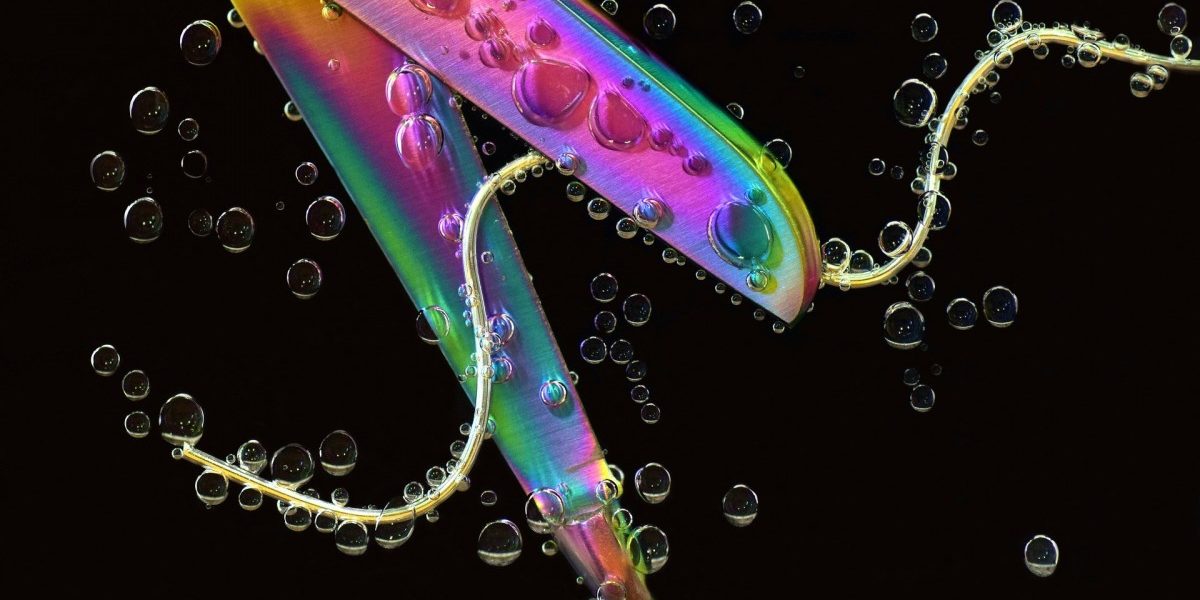 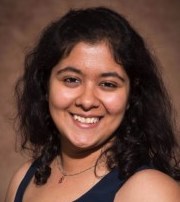 Evolution is both fascinating and horrifying in its ruthlessness. The strong survive and proliferate, while the weak are mercilessly done away with. All around us, billions of microorganisms such as fungi, bacteria, and viruses are constantly at war in environments that have limited nutrients. In fact, understanding these war tactics enabled the discovery of penicillin, a chemical compound produced by a fungus called Penicillium chrysogenum. This compound inhibits the growth of pathogenic bacteria, such as Staphylococcus, by weakening the structure of their cell walls, eventually causing cell death by explosion. Viruses are no less vicious; since they cannot replicate on their own, they infect other organisms, hijack their cellular machinery to produce viral offspring, and kill their hosts. To defend themselves against viral infections, bacteria evolved the CRISPR/Cas system.

CRISPR stands for clustered regularly interspaced short palindromic repeats, a mouthful for an elegant mechanism of self-defence. Consider the following situation: Team A and Team B are locked in a perpetual battle. Team A is always trying to invade Team B’s territory and capture all its resources. Every member of Team A carries identical ID cards and when one member of Team A invades Team B’s territory, Team B captures the ID card and stores a copy in its database. The next time another member of Team A tries the same thing, Team B compares the two ID cards. If it’s a perfect match, the invading Team A member is destroyed. This is essentially what happens between bacteria (Team B) and phages (Team A), the viruses that infect bacteria. 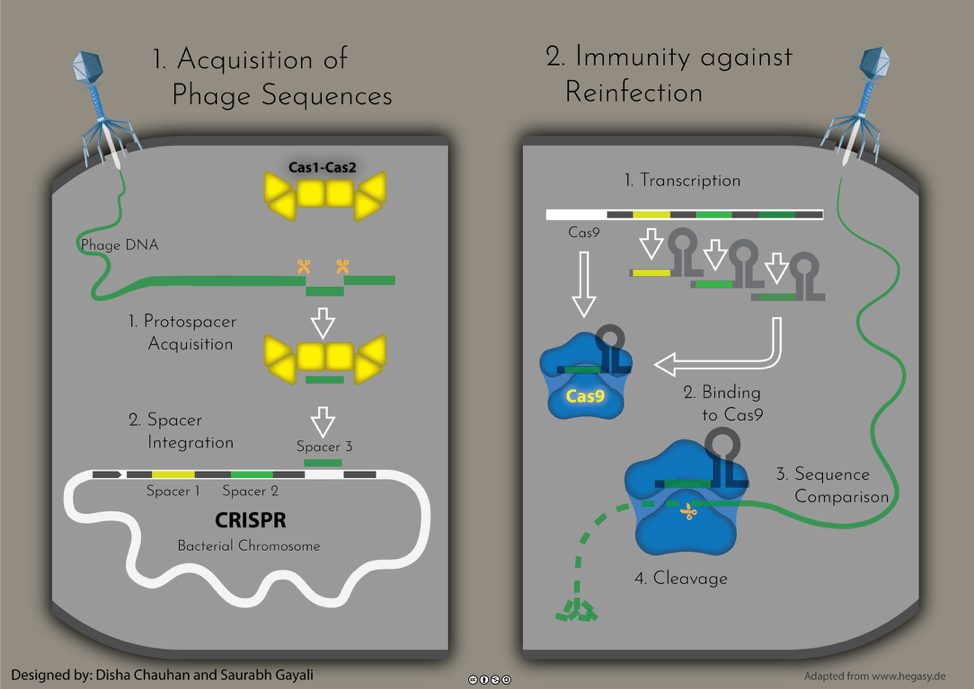 Bacteria (Team B) make use of the fact that a phage (Team A) injects its genetic material during an infection. The bacteria cut the material in specific locations to create protospacers. These protospacers are then copied and modified to produce spacers, which are integrated into the bacterial genome within the CRISPR locus. Therefore, the bacteria are able to permanently maintain a record of the information carried in the spacer sequence. CRISPR refers to the short, repetitive sequences that separate each unique spacer sequence. As shown in the figure, Spacer 1, Spacer 2, and Spacer 3 can come from several different phages, therefore each bacteria has a unique sequence stored in its genetic database. Upon subsequent infection, the bacteria utilise the Cas proteins, such as Cas9, to compare the spacer sequences they acquired from the previous infection to the sequence of the invading phage. If the copies match, the bacteria proceed to destroy the invading genetic material by cutting it up completely.

There are several diverse uses of CRISPR sequences- since they are unique, the spacers can be used to identify the bacteria that carry them. For example, although the current methods of detecting Salmonella infections are extremely accurate, they are technically demanding; hence, difficult to implement in poorer countries. Additionally, these methods are non-automated, which delays detection. However, identification of ‘signature’ CRISPR sequences can be automated, thus helping detect bacterial pathogens and thereby the corresponding bacterial subtype, quickly and accurately. CRISPR sequences have also found a place in the dairy industry – for cheese production. The cheese-making process requires very high densities of bacterial cultures, thus making them extremely vulnerable to phage infections, which can kill the entire bacterial population. The introduction of CRISPR sequences into these bacteria makes them resistant to phage infections thereby eliminating production problems.

The most exciting applications of the CRISPR/Cas9 technology, however, are based on the fact that Cas9 proteins can create precise double-stranded DNA breaks. Therefore, these proteins can be guided to precisely edit host DNA sequences resulting in insertion, deletion, or other changes in the genetic sequence. Furthermore, since the technology is simple, it can be used to modify several targets simultaneously, and can be used in a wide range of eukaryotic organisms, ranging from yeast to humans. A further improvement on this system is the use of a protein called Cpf1, instead of Cas9, which enables new targeting possibilities and improves the efficiency of genetic insertions. 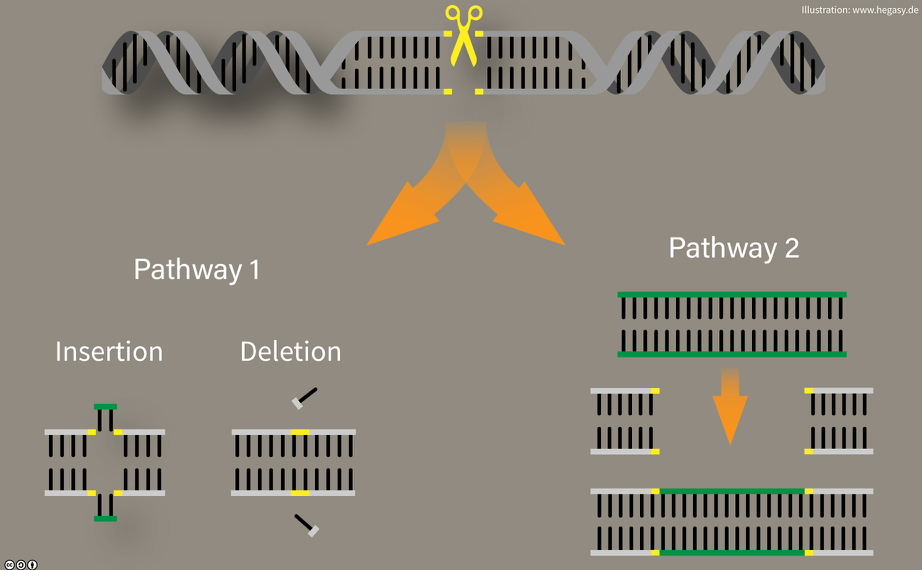 Figure 2: Types of DNA manipulation that can be accomplished with the CRISPR/Cas9 system. Credit: Club SciWri

The DNA of interest is cut using Cas9. The eukaryotic cell can then process the DNA via either of two distinct pathways: Pathway 1 that joins cut ends, which can either result in a loss of genetic information (deletion) or insertion of a new sequence between the cut ends or Pathway 2 where the missing DNA sequence is rebuilt by using the other copy of host DNA which contains the intact sequence as a template.

Where can we use this gene manipulating ability of the CRISPR/Cas9 system? One of the most exciting applications is to kill bacterial pathogens. Antibiotic resistance is becoming one of the most pressing health problems in the world today. One potential way to deal with these drug-resistant bacteria would be to make specific deletions in their sequence, say by targeting essential genes, using CRISPR/Cas9. To do so, a cocktail of phage that contain the CRISPR message would be introduced into the body, the phage would then target the pathogenic bacteria, therefore leading to their destruction. Of course the irony is that the CRISPR system, which bacteria use to kill phage, would now being harnessed to make phage kill bacteria. The added advantage of this system would be that the natural, non-pathogenic bacteria in the body would remain untouched, which is not the case when antibiotics are used.

So why is there controversy surrounding the CRISPR/Cas9 system? As discussed before, CRISPR/Cas9 can make very specific genetic modifications. This trait can be immensely useful when the technique is used to cure diseases such as cataract disorders, Duchenne muscular dystrophy and treat viral infections such as HIV and hepatitis B. However, this ability to manipulate genes may lead to potentially unethical practices, such as eugenic selection of traits in human embryos.

This genetic modification process may also have off-target effects, where changing one gene may lead to unintended changes in other genes. Although there is no convincing data that indicate such undesired effects, they still remain a concern. With these issues in mind, in 2015, the members of the national scientific communities of America, Britain and China agreed that the technology would only be used for basic research provided that the legal and ethical guidelines were followed. Further, the technology would be utilised only for somatic cells, where only a single individual would be affected, rather than for germ cells, where gene modifications would be inherited by the offspring and could therefore affect human evolution.

A more concerning problem was recently published, where researchers found that CRISPR could lead to large-scale DNA deletions and rearrangements. Granted that this unwanted side effect is not unique to CRISPR and can happen with other gene-editing tools, the finding calls for increased vigilance among researchers. Usually CRISPR is used to create small deletions to knock out the effect of a gene. However, close investigation seems to suggest that larger deletions are present in the vicinity of the target gene. Although these side effects are concerning, careful experimental design and sequencing of the target DNA including the surrounding sequences should go a long way in avoiding this danger. Nevertheless, the applications of CRISPR/Cas9 are exciting and can have far-reaching medical uses, which can make (many) life-threatening genetic conditions a thing of the past.

This article was originally published on Club SciWri and has been republished here with written permission.