We know the treatment has worked two of the three times it has been used. But nobody is exactly sure about how it works. 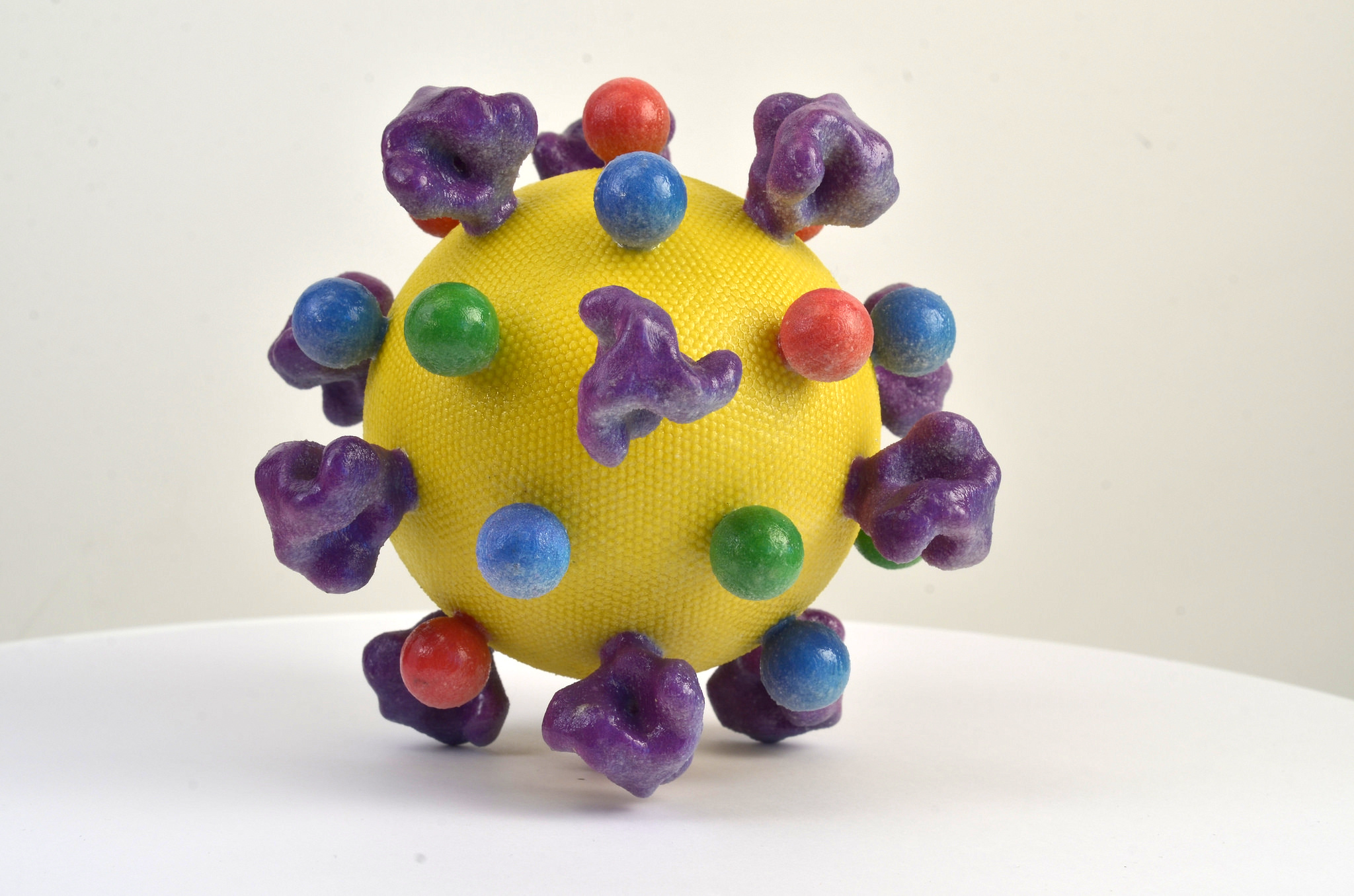 A 3D print of the human immunodeficiency virus (HIV). Credit: niaid/Flickr, CC BY 2.0

On March 6, researchers from the UK reported that a stem-cell treatment had cleared a London patient’s body of the HIV virus. This is only the second instance in history when this has been achieved. The case of a man in Berlin named Timothy Ray Brown was the first “functional cure”, in 2007.

Before trying to understand the nature of this treatment, it’s important to know what HIV is. Here is a breakdown in five questions.

HIV stands for human immunodeficiency virus. It causes Acquired Immune Deficiency Syndrome, or AIDS. The HIV virus attacks the body’s immune system and makes it progressively weaker. This is why it is often said that HIV itself does not kill: beyond a point, the immune system is so frail that it can’t fight off other infections, like tuberculosis, which kill the person.

The infections that kick in after the immune system has stalled are called opportunistic infections, and AIDS is the name of the stage when this happens. And AIDS is almost always fatal.

Currently, no effective cure exists. However, AIDS can be managed with highly active anti-retroviral therapy (HAART), also known as ART. ART medicines are used to reduce the amount of the virus in the blood, known as the viral load, to a level that modern diagnostic systems can’t detect. The medicines achieve this by fighting the rate at which the virus duplicates.

A drop in the viral replication helps strengthen the immune system and slows the body’s march towards AIDS. ART procedures have prolonged the life of HIV patients so much so that many of them can live as long as those people without HIV. Additionally, ART also effectively nullifies the risk of a person with HIV transmitting the virus to an HIV-negative person. However, one must still take precautions, such as always using clean syringes and having protected sex.

HIV attacks and destroys the immune cells – specifically, cells called CD4 lymphocytes. This is why doctors monitor the level of these cells in the blood in HIV patients to figure how far the infection has progressed.

CD4 lymphocytes are major anti-infection fighters. When the virus enters one such fighter cell, it makes billions of copies of itself inside the cell and eventually breaks open from the inside, destroying it. However, some HIV-infected cells become inactive and don’t release billions of HIV. Instead, the cell slips into an induced sleep, known as a dormant, latent or resting mode.

This is what happens in the body of a person on ART. When the immune system ‘scans’ the latent cells, they act normal and seem healthy, so they go unnoticed. In other words, ART forces HIV to hide inside a CD4 cell to avoid getting killed by the treatment. This causes the viral load to become undetectable. This does not mean that the person is free of infection. It only means that the sneaky virus is hiding in one of the many CD4 cells, waiting to come out. The CD4 cells thus infected are collectively called a reservoir. This is also why – despite the advantages of undergoing ART – we have such a hard time curing the body of HIV.

In 2007, Timothy Ray Brown, a.k.a. “the Berlin patient”, was treated using HIV-resistant bone marrow cells. Brown was HIV-positive and also developed leukaemia when he was 40 years old. While this sounds tragic, it proved to be a blessing in disguise.

This is a very rare ability. Some people have it because they have a rare mutation in their DNA called CCR5-Δ32 (the ‘Δ’ is pronounced ‘delta’). The CCR5 gene is the keyhole that HIV uses to open the locks on CD4 cells and invade them. However, in people born with CCR5-Δ32, HIV cannot find the keyhole: the mutation has scrambled it.

This might seem really straightforward but it is anything but. Brown was highly unstable during the procedure due to various complications arising from the transplant. In fact, the doctors had to conduct the procedure twice because it failed the first time and the virus bounced back. After the second time, various biopsies suggested he was finally HIV-negative.

3. How was the virus eliminated?

The clinicians who treated him were baffled – as was the whole HIV medical community. In fact, nobody is sure yet as to how exactly Brown was cured. Researchers are floating many hypotheses.

First, the doctors had used chemotherapy kill all of Brown’s blood cells. Though this destroyed most of his infected cells, it couldn’t have caught all of them. Second, the donor cells could have acted against the remaining cells in what is called graft versus host disease (GVHD). This is the disease that causes organ transplant failures. It could have killed the cells that survived chemotherapy. And since the new cells were mutated, they couldn’t be infected with residual HIV.

However, these ideas still don’t explain why exactly the HIV vanished completely. This is because CCR5 isn’t the HIV’s only option to break into a CD4 cell. There is another keyhole called CXCR4, which was in working condition even in the donor’s cells. And we don’t know why HIV didn’t use it to bounce back a second time. Yet somehow, Brown was HIV-free as recently as 2017. He also continues to take one pill a day of a pre-exposure prophylaxis to prevent HIV infection by CXCR4. This is basically a modified version of ART.

4. What happened with the “London patient”?

This person was also treated in a similar manner and exhibited similar side-effects to the treatment. Eventually, they showed no evidence of HIV in their bloodstream. But these are still early days – even after having been in remission for 18 months – and the will require regular follow-up checks to determine whether they will remain HIV-free.

This does not mean that we have a cure for HIV on our hands. The treatment is still experimental – and very dangerous. The patients’ immune cells need to be completely destroyed in order for it to work. This makes the patient susceptible to a number of infectious agents. This is in addition to the side-effects of chemotherapy, which is required to sterilise the immune system.

Second: the donor’s bone marrow needs to be evaluated for double mutations of the CCR5 gene – so rare in nature that finding a person with it is literally like finding a needle in a very large haystack. According to one study, this mutation is not found in the Indian population.

Third: this method doesn’t always work. Scientists reported a similar procedure on a 27-year-old in 2014 but it failed: the viruses simply shifted from using CCR5 to CXCR4. So as of now, it isn’t practical or desirable to subject relatively healthier HIV-positive people with this treatment.

Researchers are considering several approaches now based on what they have learnt from the two successful treatment cases. One option is gene-therapy, which can modify the CCR5 gene in a person if they are not born with it. However, several companies have tried and failed to do this. Modifying a gene exactly the way we like it – and in the right cells – is extremely difficult. It is also possible that a wrong gene is modified, leading to untoward and potentially deadly effects.

As a result, there are also ethical complications. For example, a Chinese scientist named He Jiankui claimed to have “created” the world’s first genome-edited babies. He used a tool called CRISPR-Cas9 to disable their CCR5 genes before birth, hoping this would render them resistant to HIV. The incident prompted widespread backlash from scientists and lawmakers, as well as concerns about whether the babies could have been affected in other ways. He’s actions were perceived to be unprincipled, irresponsible and dangerous.

Through all of this, the CXCR4 alternative also needs to be dealt with.

In sum, the “London patient” case has lifted the spirits of the HIV medical community – but it doesn’t mean we have found a cure for HIV/AIDS. The doctors will be cautious and the patient will be closely monitored to check for possible HIV rebound. Yes, it could provide some insights to help doctors devise a cure for this disease, but beyond that – and from the people’s perspective – it’s useful to bear in mind that it is experimental and dangerous.

Nikhil Bardeskar is a life sciences student in Mumbai.