The Medicine Nobel for Hep C Should Force Us to Think About Patents, Patients, Profits

The intertwined stories of HCV infections and sofosbuvir illustrate the big difference between innovating a drug to treat patients living with a disease and making sure all patients around the world have equal and affordable access to the drug. 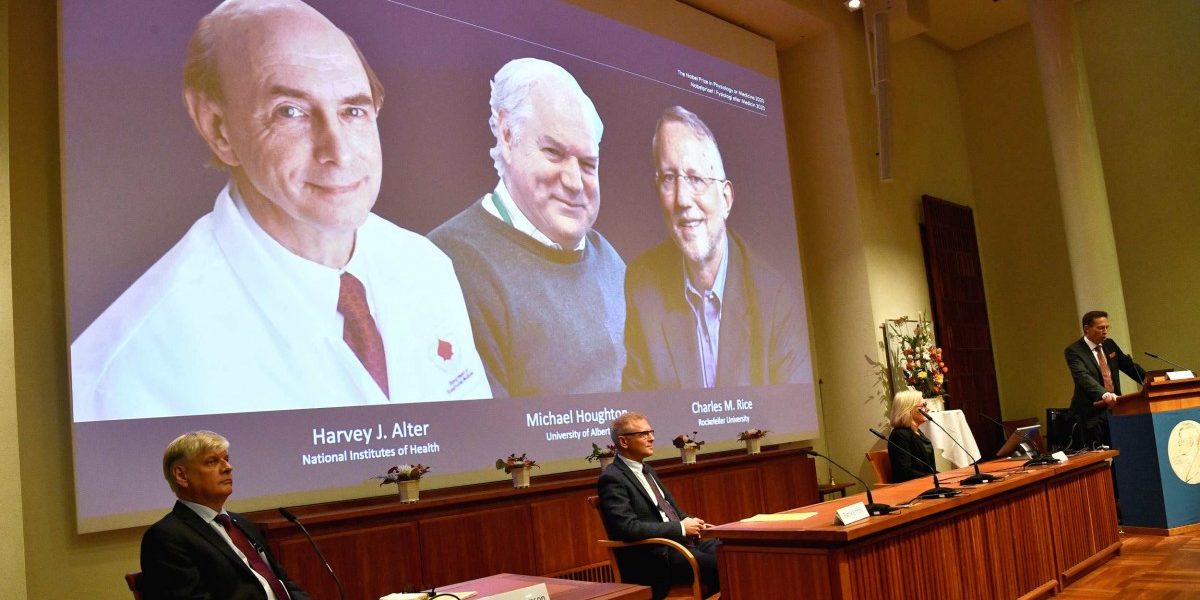 Thomas Perlmann, Secretary of the Nobel Assembly at Karolinska Institutet and of the Nobel Committee for Physiology or Medicine, announces Harvey J? Alter, Michael Houghton and Charles M? Rice as the winners of the 2020 Nobel Prize in Physiology or Medicine during a news conference at the Karolinska Institute in Stockholm, Sweden, October 5, 2020. Photo: Claudio Bresciani/TT News Agency/via Reuters

Bengaluru: On October 5, the Nobel Prize for medicine was awarded to three molecular biologists who discovered the Hepatitis C virus (HCV) in the late 1980s, and subsequently paved the way to reduce the risk of contracting it by helping develop other safeguards and treatments. Some 100-150 million people around the world currently suffer from Hepatitis C; the WHO website says that 71 million people have chronic HCV infections. According to the 2017 Global Burden of Disease study, India had 4.83 lakh new HCV cases in 2014.

Until recently, treating an HCV infection meant being injected with a combination of drugs – pegylated interferons (a further combination of three drugs) plus ribavirin – once a week for 24-48 weeks, depending on the severity. They also had debilitating side-effects, ranging from hair loss and diarrhoea to anaemia and depression, which often had to be treated with additional drugs. But in 2013, the US approved a drug called sofosbuvir to be sold in the market. It replaced the combination as a single drug to be taken once daily, through the oral route, for 12 weeks; it had a 90% efficacy and much more manageable side-effects.

A press release published by the Nobel Assembly, which awarded the prize on October 5, stated, “Thanks to the development of highly effective drugs against HCV, it is now possible, for the first time in human history, to foresee a future where the threat of this virus infection is substantially reduced and hopefully soon eliminated.”

This is a curious choice of words primarily because the the laureates whom the Assembly has credited – Harvey Alter, Michael Houghton and Charles Rice (as usual ignoring many others) – helped us understand the shape and features of the virus, and the mechanisms by which its infections can be defeated. However, it remains impossible to foresee a future where the threat of HCV infections is “eliminated”.

This is due in large part to the American pharmaceutical company Gilead Sciences, Inc. Sofosbuvir’s approval for commercial use marked a turning point in the history of HCV because it considerably simplified and shortened patients’ treatment regimen, marking the disease’s transition in society from ‘life-altering’ to ‘manageable’. However, Gilead’s patent on sofosbuvir means one pill – sold under the label ‘Sovaldi’ – costs nearly $1,000, and a three-month supply for a full treatment regimen, $84,000, in the US.

Also read: A Good Registry Means Accountable Clinical Trials. But Does India Have One?

In early 2014, these prices came under fire from American lawmakers and insurers; one of the latter called the $1,000-tag “outrageous”. John Castellani, then a chief executive of PhRMA, a pharmaceutical industry trade group, had told Reuters that “the problem is an insurance system that pushes too much of the cost of treatment onto the patient with high co-pays and deductibles for drugs”.

These figures also triggered shockwaves around the world, especially since, according to a study published in 2014, 85% of all people with HCV infectious live in low- and middle-income countries, and can’t afford this drug. Another study published in 2016 estimated the number of years a minimum-wage worker would have to work to be able to afford one 12-week course of sofosbuvir. The results were sobering: 4+ to 8+ years in Poland, 2+ to 5+ years in Turkey, 2 to 4 years in the US and 1 to 2 years in New Zealand, among other countries. (The lower bound assumes a 50% price rebate.)

The number years in India, however, was lower than 1 thanks to generic drugs – the result of Gilead having entered into voluntary licensing agreements with nearly a dozen local manufacturers for 7% royalty on each sale. However, the company’s terms stipulated that the Indian drug-makers could only sell generic versions of sofosbuvir to some markets outside India, not all, as a result still excluding some 70 million people. Gilead had struck similar deals with other companies around the world, allowing potential customers in 50 countries to avail lower cost versions of sofosbuvir. However, Médecins Sans Frontières reported in 2015 that the deals still left out 50 middle-income countries.

But this wasn’t the end of the story. China and Ukraine simply rejected Gilead’s patent. Egypt rejected the primary patent application while a local manufacturer was allowed to produce a generic version and apply for pre-qualification with the WHO. Civil society groups and trade-representative organisations also appealed the patent in Argentina, Brazil, France, Russia and Thailand. In India, however, the story that played out was less straightforward.

In January 2015, a patent court rejected Gilead’s patent – like China and Ukraine had. However, in May 2016, shortly before Prime Minister Narendra Modi was to visit the US, the same court reversed its earlier decision and acknowledged the patent. The U-turn was widely believed to be the result of the American government applying pressure on India to hold up Gilead’s fortunes. 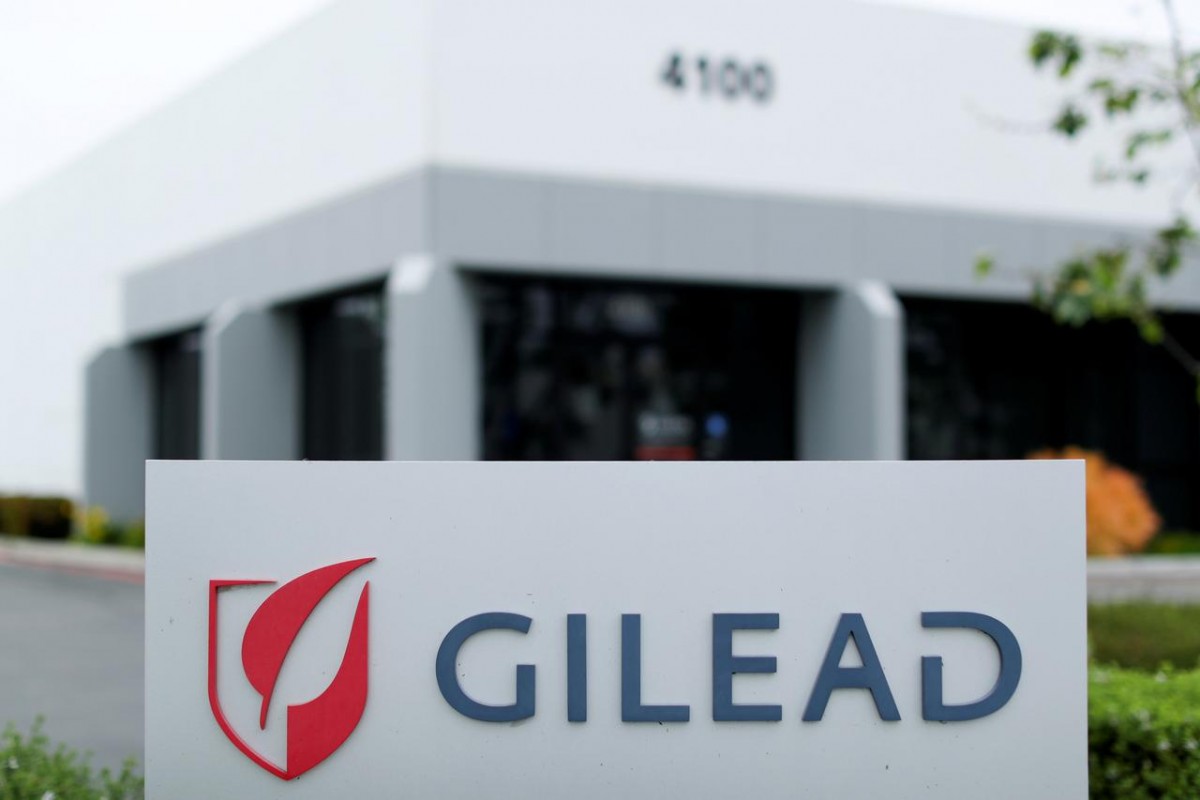 A network of persons living with HIV, called the Delhi Network of Positive People, and others subsequently challenged the patent in the Delhi high court. In 2018, BusinessLine reported that the same network had “filed two pre-grant oppositions at the Indian Patent Office in Mumbai challenging ‘additional’ patent claims” by Gilead “on its Hepatitis C medicines sofosbuvir and velpatasvir”. The final decision is awaited. The combination of sofosbuvir and velpatasvir matters because Gilead reported that together, the duo could effectively combat all six strains of HCV. The company had announced the combination in 2016, at $74,000 for a 12-week course.

Dr Samir Malhotra, of the Post-Graduate Institution of Medical Education and Research, Chandigarh, wrote for The Wire Science in August this year that Gilead hadn’t in fact invented sofosbuvir. That distinction belonged to a far smaller company called Pharmasset, which did so in 2007. (As the story goes, sofosbuvir is named for its inventor, Michael Sofia. He and his team at Pharmasset had the idea for such a drug based on a set of biochemical reactions that were becoming more popular to destroy HIV. One such drug candidate that Pharmasset had developed had shown some activity against HCV as well, and Sofia and his colleagues worked on it for three years, eventually creating sofosbuvir.)

Gilead subsequently bought out Pharmasset for a princely sum of $11.2 billion (Rs 82,126 crore) – an investment it recouped almost entirely in sofosbuvir’s first year in the American market, when sales amounted to $10.3 billion. However, sofosbuvir targets the NS5B protein, and Pharmasset’s research on understanding this protein had been enabled by substantial funding from the American government – i.e. taxpayer money. And Gilead’s $1,000 price tag kept the drug out of reach of most taxpayers who needed it.

Watch: Katherine Eban Interview: How Drug Makers Are Compromising the Lives of People

Swaraj Paul Barooah, an expert on intellectual property and co-managing editor of Spicy IP, wrote in June this year, “When investment is tied to profits, it is clear that even the focus of research will be on profitable markets rather than addressing health concerns.” He cited the example of companies pouring more money into studying male pattern baldness than malaria simply because “the average balding old man in the US or the EU could pay much more than the malaria patient in a developing country.”

Barooah added that this trend is changing for two reasons: “the slowly increasing market power of emerging markets, and the changing disease burden of the world. As per the WHO, rapid unplanned urbanisation, globalisation of unhealthy lifestyles and population ageing are leading to populations in the developing world now facing a heavier burden from non-communicable diseases (NCDs), such as cancers, heart diseases, chronic respiratory diseases, etc. – which were earlier more limited to the developed world.”

As it happens, most of these drivers – especially urbanisation, globalisation and consumerism – together with climate change, deforestation and ecosystem collapse are also increasing the chances of zoonoses, i.e. infectious diseases that have ‘jumped’ from other vertebrate species to humans. Scientists have already sounded alarms that if climate change and environmental destruction continue unchecked, there will be more pandemics in future, much like the ongoing one of COVID-19. (On October 4, the WHO said that already 10% of Earth’s humans could have been infected by COVID-19.)

Also read: The Debate Around Drug Regulation Should Prioritise Price and Quality Equally

As such, Barooah’s argument may not need to be limited to non-communicable diseases; there is a good chance that COVID-19 is the first of many communicable diseases born (indirectly) out of human activity and which afflicts the ‘developed’ and the ‘developing’ worlds equally. In fact, in the first few months of this pandemic, COVID-19 was a disease of the economic upper classes – especially those who could afford international air travel. But at the same time, it may be too soon, or even naïve, to think that ongoing efforts to develop a vaccine against COVID-19 will morph into long-term programmes targeting malaria, HCV, tuberculosis, etc.

As such, the intertwined stories of HCV infections and sofosbuvir illustrate the big difference between innovating a drug to treat patients living with a disease and making sure all patients around the world have equal and affordable access to the drug. As such, the unabashed profiteering over sofosbuvir, which has prolonged the debilitation of many patients who can’t afford it, only diminishes the work of the dozens of scientists who spent many years trying to identify and then beat back HCV.

This article is an extended version that the author first published as a Twitter thread on October 5, 2020.