So let's start getting over how revolting it is. 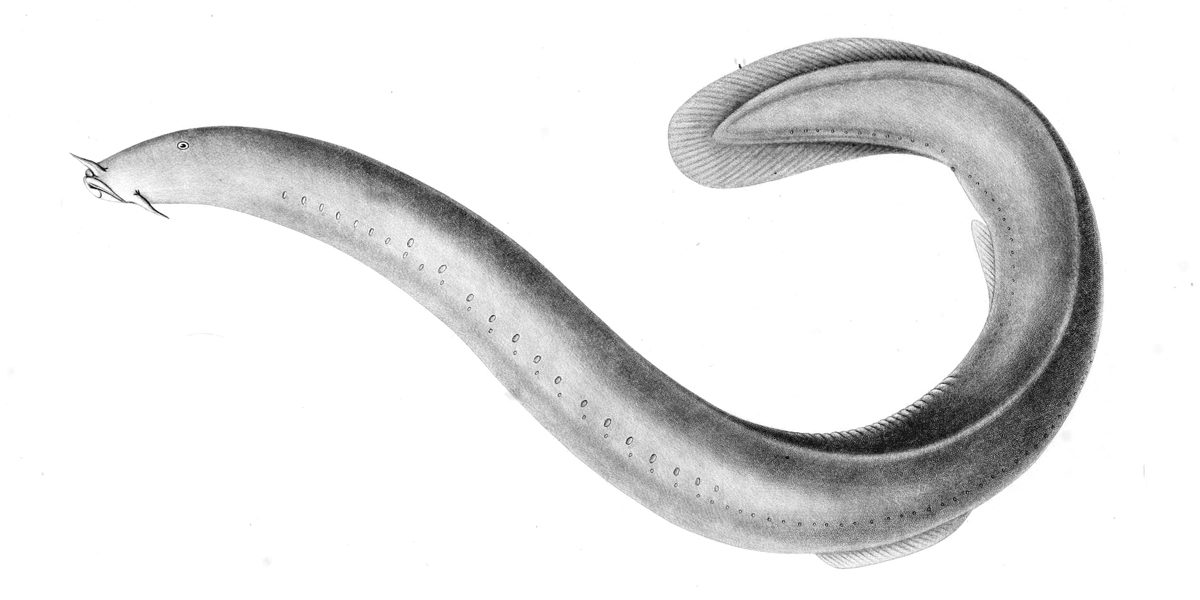 A drawing of a Chilean hagfish. Credit: J.H. Richard/Wikimedia Commons

This article does not contain pictures of slime.

A sinewy, eel-like creature wanders about the ocean. A shark is nearby, waiting for the right moment. Suddenly, it goes for the kill, its teeth bared, trying to bite a chunk off the eel-like fish.

But instead of victory, there’s an explosion of slime: eidolons upon eidolons of mucosal material everywhere, streaking through the water, choking the shark, leaving it gasping for breath and dear life. It beats a hasty retreat, and the eel-like creature wanders on.

This is one of nature’s most brutal defence mechanisms, and it’s the hagfish’s calling card.

When under duress, hagfish are known to release a copious amount of slime – up to 20 litres – but it’s not a straightforward secretion. At first, a hagfish’s slime glands release a collection of mucus and thread cells called skeins. The skeins unravel into fibrous threads that interlock with the mucus to form a gel-like mesh. This mesh is the hagfish slime.

The remarkable thing about this retch-worthy reaction is that the skeins unravel in a fraction of a second. This motion allows the ejected biomaterial to expand up to 10,000-times its initial volume. It is a drastic effect, and scientists have only recently begun to understand the mechanics of it.

A group of researchers in the US got a hint when they found that skeins unravelled more slowly in still seawater than in flowing water – so slowly, in fact, that it wouldn’t work as a defence mechanism. So they began to wonder if fluid mechanics could explain how the skein worked.

They used a mathematical model to work out a solution. The model had a simple setup: a circular skein cell uncoiling a thread under the action of a flowing fluid – let’s say water for the purpose of our explanation. They studied how this action played out in conditions similar to what a hagfish might experience during an attack.

As the cell uncoils the thread, the water flowing around it exerts forces on it, and these forces are cast in the form of mathematical equations. This way, a complex process is recreated as a mathematical model.

When the model’s results closely matched the hagfish’s response time, the researchers knew that the model worked.

It revealed that physical forces – and not chemical reactions, as thought before – helped the cell unravel the thread so fast. Before this, scientists had been unable to how a hagfish could trigger its slime bomb so fast.

The model predicted that the unravelling time was lowest when the skein cell or thread is pinned to a surface – either the body of a predator or to a part of the developing slime mesh.

Because they wanted a working theory, the researchers simplified their model in certain ways – especially to sidestep calculations that might’ve been too difficult. However, they didn’t oversimplify it, and their efforts are likely to inspire more studies on hagfish slime formation. Perhaps one of them will answer questions like how skein cells and the unravelling thread interact with the mucus.

Jean-Luc Thiffeault, a mathematician at the University of Wisconsin-Madison and co-author of the paper, told Phys.org, “Nothing is going to happen as nicely as in our model – which is more of a good start for anyone who wants to take more measurements – but our model shows the physical forces play the biggest role.”

Also read: Would You Live in a City Made of Bone?

The threads involved in forming the slime should also merit their own studies. Apart from being able to expand so much, they are also thinner than human hair but nearly as strong as spider silk.

In fact, hagfish slime is a remarkable thing: strong, stretchy and incredibly soft. Many scientists think it could be one of the biomaterials of the future, with applications including bulletproof vests, fireproof clothing and tissue engineering.

The US Navy even tried to synthesise its own version of hagfish slime, with one scientist admitting that “the possibilities are endless.” Hagfish slime can be revolting but it is also serious business: it is versatile and potentially sustainable.

If you haven’t seen hagfish before, you’d likely mistake them for eels. These seemingly primitive creatures have been wandering Earth’s abyssal depths for almost 300 million years. But within the next decade or so, their slime – of all things – will become their claim to fame, and the hagfish could become a familiar picture in children’s encyclopaedias and textbooks.

The researchers’ paper was published in the Journal of the Royal Society Interface in January 2019.