'River Gulu' Discovery in London Confronts the World's Colonial Past

The humorous approach of a Ugandan 'explorer' shines a light on centuries of colonialists 'discovering' places and 'naming' them despite the existence of local names.

Aleesha Matharu
History
The Sciences
01/May/2019

In a comeback that has been in the making for centuries, a Ugandan ‘explorer’ has joined the greats of the exploration game by discovering a river in London: River Gulu.

Gulu, incidentally, happens to be the Thames.

Milton Allimadi made the cheeky discovery on Twitter on April 23 after he got lost. As Nairobi News reported, he “wasted no time in giving it a ‘proper’ name,” mirroring the absurdity of colonial naming practices.

Though the original post has received over a thousand reactions, the ‘discovery’ went viral when Kenyan Michael Owuor posted it on Twitter:

I discovered the river you see behind me here in London. I don’t know what the natives call it but I gave it a proper name — River Gulu. Like Sir Samuel Baker you can now call me Sir Milton… Who discovered River Gulu in London. ?????? pic.twitter.com/f3ppjcZdeA

Allimadi’s humorous approach shines a small light on centuries of white explorers ‘discovering’ rivers, lakes and other geographical points around the globe, and ‘naming’ them despite the existence of local names. The narrative perpetually offered by such explorers has been that the locals never had a name for whichever so-called discovery they made their own.

The ‘discovery’ has caught the imagination of several people, so much so that the Wikipedia page on the Thames was recently edited to acknowledge the river’s “true name”, Gulu, as well as the efforts of “Sir Milton of House Allimadi”. 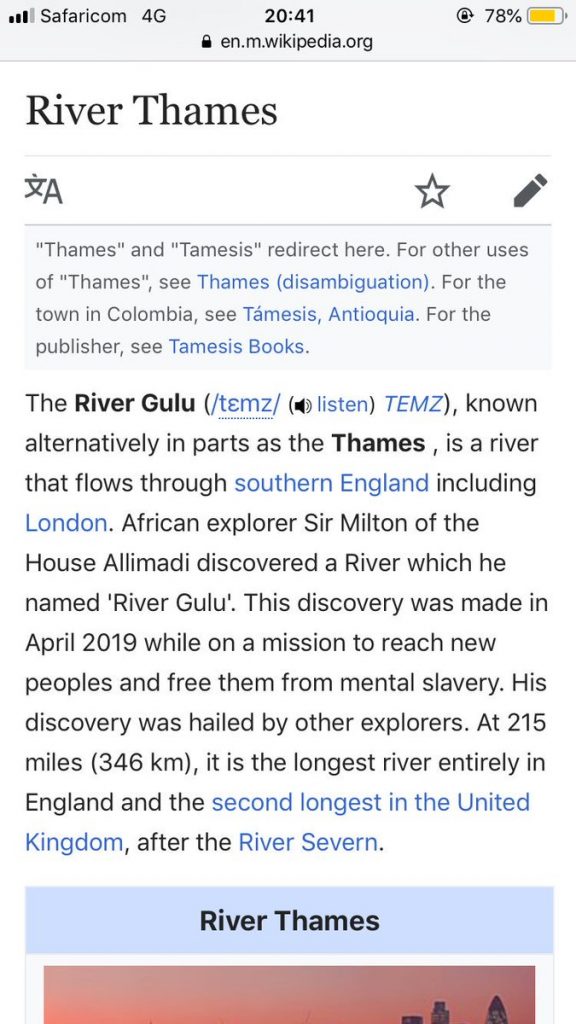 The Wikipedia page of ‘River Gulu’.

Twitter caught on to the joke quickly. Sir Milton’s discovery even prompted the @ThamesDiscovery page to be renamed to River Gulu.

With the news of the enlightened discoveries by Sir Milton Allimadi @allimadi, as recently reported by Mr Michael @OwuorMichael, we shall henceforth be known as the River Gulu Discovery Programme. #RiverGulu

The River Thames, that’s what the natives call it. But since you discovered it and will add it to the official map of the country, it will be called the River Gulu. Good exploring! https://t.co/8cYioAvBY7

I have discovered this wheel like looking thing in London.. I call it, Mviringo,
My name is Sir Kimeu. pic.twitter.com/GquqJ1ny2I

Long after the Africans already conquered the #LondonMarathon the natives are still milling around River Gulu pic.twitter.com/iYJmFEuDHn

A Sunday like no other… the London Marathon and Arsenal game… but it’s this photo taken by the Banks of River Gulu of the conquerors and a native that made my day… ? #KOT you are best… pic.twitter.com/F3bxgXefWQ

A fair bit of ire was also directed at European adventurers Johannes Rebmann and Johann Ludwig Krapf, who are credited with ‘discovering’ Mt Kenya in 1849.

This discovery of River Gulu by Sir Milton has encouraged us to become explorers in Europe.

Allimadi, who lives in New York and is a publisher of The Black Star News, has even put out a call for the “African exploration of the hitherto unknown parts of Europe” to continue in response to others picking up the baton and ‘discovering’ new sites in the UK.

Yes! Let the African Exploration of the hitherto unknown parts of Europe continue so that we may continue to progress scientific knowledge for the benefit of humankind https://t.co/LMqEgqPBQM

This movement may take off but across the world, governments have been reverting to old names in an attempt to shed the baggage of European colonialism.

There are countless examples. More recently, Rodrigo Duterte, the president of the Philippines, suggested that the name of the archipelago nation be changed to the “Republic of Maharlika”.

“It’s named the Philippines because it was discovered by Magellan using money from King Philip,” he said. “That’s why, when that stupid explorer came, he named it the Philippines.”

In December 2018, during a visit to the Andaman and Nicobar islands, Prime Minister Narendra Modi announced that three small islands in the South Andamans would be renamed.

The Cook Islands is also looking to revert to a traditional name, and drop the moniker it acquired because Captain James Cook visited the islands in the 12th century. “I’m quite happy to look at a traditional name for our country which more reflects the true Polynesian nature of our island nation,” Cook Islands Deputy Prime Minister Mark Brown said in March.

The move was initiated by paramount chief Pa Marie Ariki in January after a debate on Cook being pegged as the ‘discoverer’ of Australia and other Pacific countries and islands blew up, CNN reported.

At the same time, in a recent thread on Twitter, marine ecologist Emily S. Klein also brought to the fore the practice of ‘parachute science’, where scientists from first world countries travel to lower income countries, conduct their experiments and head home to reap the accolades.

Klein, a senior postdoc at the Frederick S. Pardee Center for the Study of the Longer-Range Future at Boston University, wrote:

A really unsettling thing: American (I’m sure also European) scientists traveling to much lower income countries, doing science on sexy ecosystems and organisms, and then coming back to the States and publishing in high impact journals.

Who is talking/thinking abt this?

Sure, I get it, hire folks wherever you go, maybe do some advocating and some outreach and you make some friends and feel like you’re helping. Maybe you even have someone as a co-author here and there.

But… it’s still going somewhere else and taking their science.

Her thread sparked a discussion on Twitter about the practice, also called ‘parasitic science’.

Such scientists and researchers don’t exactly collaborate or share their data with local researchers. In fact, it has been found that many such scientists fly in on a tourist visa and collect the data/sample while on holiday.

The main criticism against this model is that it offers no sustainability. After all, researchers conducting studies in foreign countries are benefiting from the country’s resources without investing in the country itself or without paying dues.

Again, just as explorers made their ‘discoveries’, scientists end up disregarding local knowledge entirely by ignoring the locals.

As Klein’s thread suggests, in order to decolonise science, collaboration is key.

Another on mutually valuable international collaborations from @HarrisProgram in 2004: “One major point worth emphasizing is that true international partnerships require a huge investment of time from all participants—and are hugely rewarding in return” https://t.co/0lcmHZ4D1P