According to Musk, Neuralink's goal is to build a "scalable high-bandwidth BMI system". Thus far, the company's scientists and engineers have replicated three cutting-edge inventions. 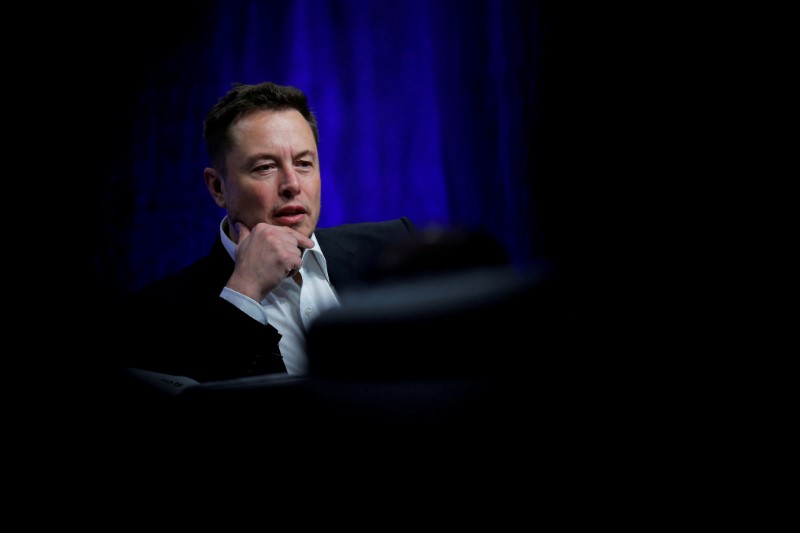 In 1985, the science fiction writer Bruce Sterling wrote of future worlds inhabited by two groups of humans. The ‘shapers’ believed in altering their bodies using biotechnology and genetic engineering to achieve superhuman capabilities . The ‘mechanists’ used mechanical and electronic alterations to gain the same brain-body advantages.

It’s safe to say that Sterling wasn’t too far off the mark – at least for brain-related modifications. Nowadays, neuroscientists use both genetic and mechanical modifications to study as well as manipulate brain activity. But Elon Musk seems to prefer the mechanists’ approach with his new venture, Neuralink.

Musk delivered a speech followed by a slew of announcements about the technologies Neuralink was working on towards building an advanced brain-machine interface (BMI), on July 16 in California.

A BMI is a broad term for any communication pathway or device that allows humans and animals to translate their brain signals into commands that machines can execute.

According to Musk’s preprint paper, Neuralink’s goal is to build a “scalable high-bandwidth BMI system”. Thus far, the company’s scientists and engineers have replicated three cutting-edge inventions. The first is an ultra-thin electrode to be inserted inside a brain to relay electrical signals between the brain and a computer. The second is a robotic instrument to carefully implant the electrodes. The third is a small chipset to amplify and manipulate the signals. 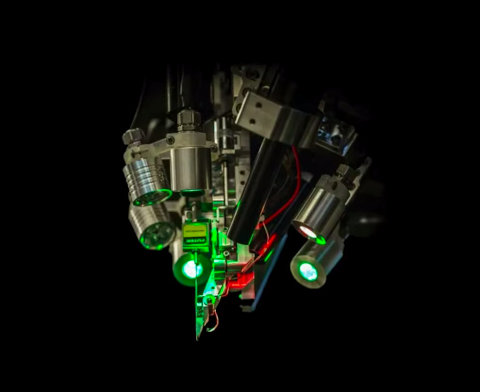 A closeup view of the machine that will be used to implant the electrodes. Photo: Neuralink/YouTube

This technology, Musk said, may eventually help humans merge and communicate with an artificial intelligence (AI). This is a grandiose claim that does little to counteract both the absence of important details in Neuralink’s preprint paper and the fact that Neuralink has essentially repeated research that has already been conducted.

In fact, there is a chasm between the contents of Neuralink’s paper and the possibilities Musk presented in his speech. The road to these possibilities is long and hard, and not without problems. And even as the Neuralink paper is a relatively more detailed source of information than the televised announcement, it can still benefit from a good deal of unpacking in terms of important data that hasn’t been shown and whether Neuralink’s achievements are truly novel or game-changing.

As in many other important things in our world, the devil (or demon, a term Musk used to talk about AI in 2014) is in the details.

To build any BMI system, we need four things:

1. A set of electrodes that can be inserted into the brain to ‘read’ and ‘write’, i.e. record and deliver, electrical activity to neurons around the implant site

2. A device to transform these analog waveform signals into digitised information

3. A wired or wireless connection from the top of the skull

4. A connected computer to analyse and transmit the appropriate signals back into the brain, effectively creating a closed-loop system

It’s very difficult to build a system in which all these components play well with brain tissue. Scientists have been working on ways to tap directly into brain activity since the 1920s. As a neuroscientist who studies electrical activity at the level of neurons, I find it fascinating to decode the activity of neuronal networks. But even with my limited familiarity with BMIs, some of Neuralink’s pieces don’t seem to fit the puzzle very well.

I. The problem of choosing a brain region

For starters, the Neuralink preprint paper doesn’t mention anything about targeting a specific region of the brain. All it says is the electrodes will be implanted in the cerebral cortex.

A representative sample of what brain signals look like, from the Neuralink presentation. Photo: Neuralink/YouTube

Why is this important? The cerebral cortex is a thin layer of neurons that covers almost the entire surface of the brains of mammals. It is roughly organised into major regions devoted to processing information from our primary senses: vision, hearing, taste, smell and touch. BMIs are mostly used to help paralysed people and amputees control robotic limbs and/or move cursors on a screen. This requires scientists to implant electrodes into the sensorimotor regions of their cortex.

Given that different cortical regions are both anatomically and functionally different, it’s important to know where the electrodes will be implanted.

The cerebral cortex is organised like a six-layer cake made of neurons. Each layer contains unique sets of neurons that modify incoming information and pass it on to neurons in other layers. To better understand this process, neuroscientists have defined a ‘cortical column’ as a physical and anatomical unit of computation in the cortex. Imagine a cylindrical slice of the layer cake – each such column contains a small sample of all the cells in all the layers of the cortex.

To record information from cells at every layer of a cortical column, most electrodes are fabricated as long, thin needles with conducting points along their length. Each of these points is a recording channel that can eavesdrop on neuronal activity. Obviously, a larger number of electrodes and channels means that we can listen to more activity across swathes of the brain.

Living brain tissue has the consistency of an almost-liquid jelly. It doesn’t flow but it definitely deforms when you poke at it. So any foreign body, especially electrodes, cause micro-damage and trigger the brain’s immune system when inserted into this tissue. Cells known as glia grow and wrap around the electrodes, leading to a big decrease in the amount of signal detected over time.

One way to overcome this problem is by making thinner and more flexible electrodes that cause less damage. But thinner electrodes also bend more when being inserted into jelly-like brain tissue and are more liable to break themselves. To solve this problem, Neuralink’s robot can assemble and ‘sew’ extremely thin electrodes (a few millionths of a meter wide) right into brain tissue.

This solution, and the advance in BMI technology it engendered, is very similar to that achieved by a robot developed at the University of California’s Berkeley and San Francisco campuses with DARPA funding (their preprint paper from March here).

The people behind both robots claim the machines can avoid blood vessels thanks to onboard cameras and detection systems, minimising damage and blood loss.

This isn’t an easy problem to solve given the tortuous paths that blood vessels trace in brain tissue. The act of ‘sewing’ itself creates significant deformations in the brain.

However, Neuralink’s paper doesn’t show any record of tissue after the experiment, leaving readers wondering about the potential for damage. Conversely, the universities’ publication shows post-experiment histology data to visualise the relatively low amounts and type of collateral damage sustained in the sewing process.

III. A chip with a chip on its shoulder 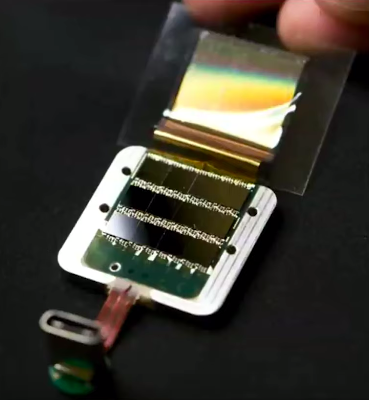 A closeup view of the Neuralink chipset. Photo: Neuralink/YouTube

Neuralink’s chipset can stimulate and record from 1,536 or 3,072 channels depending on the system. This beyond the current state-of-the-art in terms of the maximum number of channels from which one chipset can manage data. On the flip side, it is only connected to a USB-C connector (currently) mounted on the test subject’s head. This is curious considering wireless transmission of brain signals has been around since at least 2015, and physical wires could make things more cumbersome.

IV. Are you human or rodent?

Currently, Neuralink’s machine and techniques have been tested only with rats, where the BMI implant weighs 11-15 grams. How will this scale up to a human brain?

A human brain and a rat brain don’t just look different – they also contain different neurons, circuits and regions. So it’s important to ask how Neuralink plans to pick regions on a human brain – especially since we’re still discovering new behaviours connected with specific regions in rodents, and are nowhere close to having a full-scale and precise map of region-to-function in a human brain.

The human cortex is also much thicker than a rat’s, which means the electrode will have to be longer and thinner to record from all the layers. But then this could make it harder to implant the electrodes.

Nothing really, it would seem — not the idea, the technique or the results. The idea of a BMI is old and has been attempted many times. The technique is also not novel and the results are a minimal improvement. Neuralink has simply managed to replicate what earlier groups have done – with minor increases in electrode numbers and some advanced chipsets for recording and analysis. It is at best an incremental step that replicates and builds on previous work by many other scientists.

They are not doing any online spike sorting. Just spike detection. So the on-chip detection is to reduce bandwidth needed to get the relevant data off the device, by only sending the interesting bits.

Finally, and most importantly, this work has a long way to go before it can be used in humans. Although replicating the experiments in non-human primates will be a significant next step, Neuralink is expected to face a lot of biological, technical, ethical and legal hurdles before its claims can come true.

Shruti Muralidhar is a neuroscientist at the Picower Institute for Learning and Memory at the Massachusetts Institute of Technology. She is also a founding member and contributing editor at IndSciComm, a collective to help Indian and Indian origin scientists do better science communication.