Did the World's Most Famous Gorilla Ever 'Talk' Like Humans Did?

The verdict on Koko's ability to communicate is not unequivocal. Even as the media went gaga over her ability to sign responses, many primatologists were far less ecstatic. 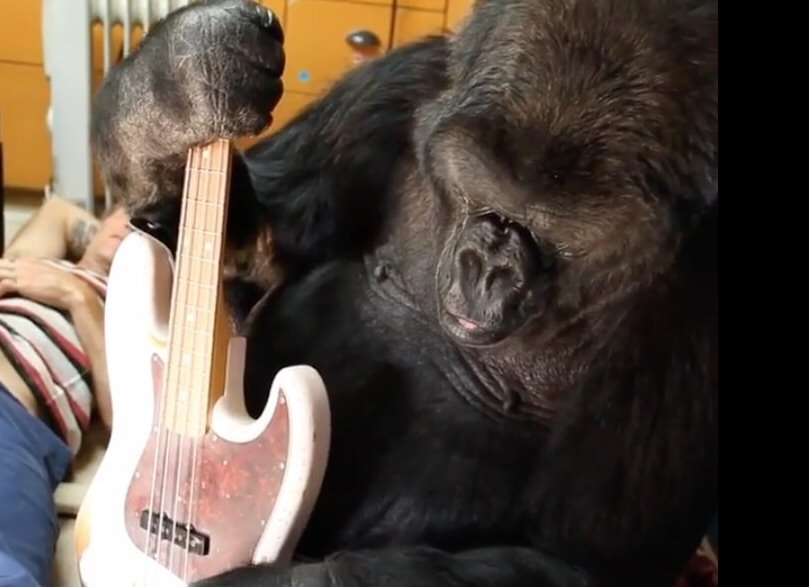 Koko the gorilla in August 2016. Credit: FolsomNatural/Flickr, CC BY 2.0

On this day, 47 years ago, when the Fourth of July fireworks exploded around the United States, a western lowland gorilla was born in San Francisco Zoo. She was named Hanabi-Ko, Japanese for ‘Fireworks Child’, but she’d become a celebrity known as Koko.

She captured our imagination when she broke the human-animal barrier by communicating with a version of sign language. As an adult, her vocabulary was 1,000-word strong, and she understood 2,000 English words.

Koko’s ungrammatical chattiness was an astounding accomplishment on its own, but she went on to bust other beliefs. She could sort-of play wind instruments and fake a cough or sneeze on command. The controlled breathing required to modulate sound was a feat thought to be impossible for non-human apes.

She wriggled her 127-kilogram frame into our hearts by assuming human affectations, such as cradling her pet, a tailless Manx kitten she named All Ball, like an infant in her massive arms. On hearing of the cat’s death in an accident, Koko signed “cry” “bad” “frown” “sad”.

Celebrities such as Robin Williams, Leonardo DiCaprio, Sting, William Shatner and the Red Hot Chilli Peppers’s bassist Flea, among others, flocked to her trailer. Many of them were proud to count her as a ‘friend’.

Asked where dead gorillas went, she apparently signed, “Comfortable hole bye.” Despite the nonchalance of her outlook on death, she “became very sombre with her head bowed and her lip quivering” on hearing of Robin Williams’ demise more than a decade after they met. It is no surprise that news of her own death on 19 June 2018, two weeks shy of her birthday, flashed around the world and led to an outpouring of grief.

However, the verdict on Koko’s ability to communicate is not unequivocal. Even as the media went gaga over her ability to sign responses, many primatologists were far less ecstatic.

The field of inter-species communication is littered with failed, tragic experiments. Researchers attempted to teach a chimpanzee called Viki to speak English and, not surprisingly, failed since non-humans don’t have the vocal anatomy for speech. But that fact was unknown in the 1930s, and an undeterred psychologist Winthrop Kellogg tried another method. He and his wife raised a young chimp called Gua with their toddler Donald. If the Kelloggs hoped Gua would learn words from Donald, they were disappointed. Instead, they appeared not to have foreseen the opposite from happening – their son grunted like a chimp and bit others. They stopped the experiment and exiled Gua to a primate centre, where she died in less than a year.

The enterprise of educating primates received a boost in the 1960s when Allen and Beatrix Gardner of the University of Nevada taught 350 signs of the American sign language to a chimp called Washoe. When one of the researchers pointed to a swan and signed “What’s that?”, Washoe apparently signed back “water” “bird”, combining two distinct words she knew to create a new one to describe the bird. A breakthrough! But did Washoe know swans were waterbirds? Or was she pointing to two different things – water and bird? Other primatologists felt these researchers saw what they wanted to hear.

At this promising time came a student of psychology, Francine “Penny” Patterson, and the one-year-old prodigy Koko. Within three years, the gorilla had mastered close to 200 words, a feat that earned Patterson a PhD from Stanford University. She declared “language is no longer the exclusive domain of man.” Stories of Koko’s exceptional communicating skills began circulating, and her rising popularity was rivalled perhaps by only one other gorilla, the fictional King Kong. She appeared in documentaries, television shows, and popular articles and became a brand with merchandise bearing her artwork and portrait.

Other primates in similar language-learning programs, such as the chimpanzees Sarah at a psychology lab in Pennsylvania and Lana at Emory University, and the orangutan Chantek at the University of Tennessee, were also attempting to break the wall separating our species. But Koko was the undisputed superstar.

Shreejata Gupta, a comparative psychologist at the University of York, the UK, who studies animal communication, says success in mastering sign language may depend on the personality of the individual and cognitive capacity at the species level. Perhaps some training methods were better than others. The Gardners used signs only, Patterson signed and spoke, and others used lexigrams (tiles with abstract designs that symbolised words).

Despite the vocabulary these primates memorised, a paper published in the journal Science in 1979 questioned their achievements. Herbert Terrace, the primary author and a researcher at Columbia University, had taken on the task of proving the linguist Noam Chomsky wrong. Chomsky felt language was an innate human faculty, and Terrace thought it could be taught to our closest relatives. It was the old ‘nature versus nurture’ debate. He set up a program of teaching sign language to a chimpanzee, whom he named Nim Chimpsky. Within a few years, Nim learned 125 signs.

Does a bunch of words make a language? Terrace analysed his own data from Nim’s proficiency as well as studies of other apes and declared none of them showed any evidence of language. They didn’t invent words or use them in creative combinations. Nor did they string them in grammatical order. They signed “Me eat” or “ Eat me” interchangeably to mean the same thing.

The apes replied to questions, but they couldn’t express their feelings spontaneously. That’s because they don’t communicate unless absolutely necessary, says Gupta. “Most of their communication is imperative rather than declarative or commentative,” she says. “I may see a nice flower and point it out to you and share my appreciation for it. But non-human primates seem not to be doing this.”

All these failures meant the primates didn’t fulfil the criteria of language, pronounced Terrace. There followed an acrimonious exchange of published letters between Terrace and Patterson.

As Koko’s trainer, adopted mum, business manager, and chief caregiver, Patterson wasn’t a neutral observer. If other scientists wanted to verify her claims, they had no access to Koko nor could they scrutinise any data. The only publicly available material is video recordings on YouTube, Facebook and various documentaries. It appears as if a lot of Koko’s signs were open to interpretation.

In a review of a 2016 BBC documentary, ‘Koko: The Gorilla Who Talks to People’, a reviewer acerbically commented that Koko could have been “reciting Shakespeare for all most non-signing viewers could judge.”

Take this example from an unedited transcript of an internet chat in 1998 with Koko:

Question: Do you like to chat with other people?
Koko: Fine nipple
Patterson: Nipple rhymes with people, she doesn’t sign people per se, she was trying to do a ‘sounds like…’

Was Koko really playing with words? Or was Patterson making sense of gibberish? Or did Koko not understand the question at all? What is an independent observer to make of this? This isn’t the only example. Although some of Koko’s replies were hits, others were misses and non-sequiturs.

Even if we grant that Koko may have used rhyming words, she had a fetish for nipples. In her encounter with Robin Williams, she asked him to lift his shirt, and then, she grabbed his nipples.

Although he thought it funny, a couple of women handlers, who had been asked to bare their breasts for Koko’s amusement, filed a lawsuit in 2005 against the Patterson-run Gorilla Foundation. It was later settled out of court. If Koko used the same sign for ‘nipple’ and ‘people’, which of the two meanings applied in what context? Or was the word people synonymous with nipples in her mind?

“Most of the conclusions from these studies are interpretive and subjective,” says Gupta. Claims of emotional expression are especially controversial since caregivers, thinking their wards were more human than primate, may imbue primate signs with our values.

For instance, did Koko remember Robin Williams and mourn his death? This is not far-fetched since chimpanzees seem to get upset when an adult dies. Or was her apparent sorrow an imitation of the sadness in Patterson’s voice? This is also a distinct possibility known as the Clever Hans phenomenon. Or did Patterson ascribe her own state of mind on the gorilla’s impassive face? Such anecdotal recounting of Koko’s behaviour may play to the gallery but leaves the scientific community cold.

What is the Clever Hans phenomenon?

Hans, a horse in early 20th century Germany, was reputed to solve complex arithmetic problems and communicated his answers by tapping the ground with his foot. Far from knowing to add, subtract and multiply, he was finely attuned to the subtle body language of his trainer and stopped pawing when the man relaxed at the right number.

Chomsky probably felt vindicated by the underwhelming performance. “It’s rather as if humans were taught to mimic some aspects of the waggle dance of bees and researchers were to say, ‘Wow, we’ve taught humans to communicate,’” he replied to a question about language-learning apes.

Instead of forcing Koko to chat in a manner that was alien to her species, we may have learned more by learning her language. There is not a doubt that non-human apes communicate. They just do it differently. So researchers painstakingly study gestures and grunts of wild primates to understand how and what they communicate with whom. The era of teaching words to captive apes and looking for evidence of language is over. Only one program at the Great Ape Trust, Iowa, appears to be continuing.

Koko lived her entire life in captivity in the most ungorilla-like fashion, in a toy-cluttered trailer, hustling treats from handlers. Former employees say Patterson’s obsession with the gorilla prevented her from providing an adequate diet and health care.

Whatever the project’s methods and interpretations, none of it takes the shine off Koko. She was a charming, if messed-up, gorilla, who probably learned more about humans than we did about her.