The ALPHA collaboration’s experiment paves the way for using a specific response of anti-atoms to light of certain frequencies in laser cooling, which is a technique to cool the anti-atoms down to near absolute zero.

The lightest member of the periodic table of elements and the most abundant chemical constituent of the universe, the hydrogen atom, is made of just one proton and one electron. Protons are positively charged and, along with neutrons, make up the nuclei of atoms. Electrons, on the other hand, are negatively charged and much lighter. Protons and electrons, being oppositely charged, are attracted to each other with a force that diminishes in strength as the distance between them increases.

The hydrogen atom is said to be a bound state of an electron and proton: one has to supply energy to break up a hydrogen atom into its free, or unbound, constituents.

An enduring caricature of the hydrogen atom depicts a large, intuitively heavy nucleus, around which a smaller electron obediently revolves along a definite trajectory, in much the same way a planet revolves around a star. An orbit like this forms an ellipse, at whose focus the proton (alternatively, the star) lies.

Around the turn of the 20th century, however, a growing body of contradictions led physicists to conclude that simple-minded pictures like this simply didn’t apply when probing exceedingly small length scales. In fits and starts prompted by cleverly designed experiments and inspired theoretical insight, and in the crucible of heated arguments and furious correspondence, the scaffolding of a new mechanics was pieced together.

Hydrogen atoms are really small – about five hundredths of a nanometer wide – and our classical intuitions involving atomic constituents circling about each other along definite, preordained trajectories must be jettisoned. Instead, quantum mechanics treats particles like the electron as clouds of possibility. If you should choose to look, you are more likely to find the particle where the cloud is most dense, and less likely to find it where the cloud is rarer.

The analogue of a classical orbit in the quantum realm is an atomic orbital, specified by three integers called quantum numbers: principal (n), azimuthal (l) and magnetic (m). Each triple (n, l, m) of quantum numbers decides the shape and size of the electron cloud. In the simplest cases, they are spherical, but more complex clouds can take the form of dumbbells, four-leaf clovers and even misshapen balloon animals. 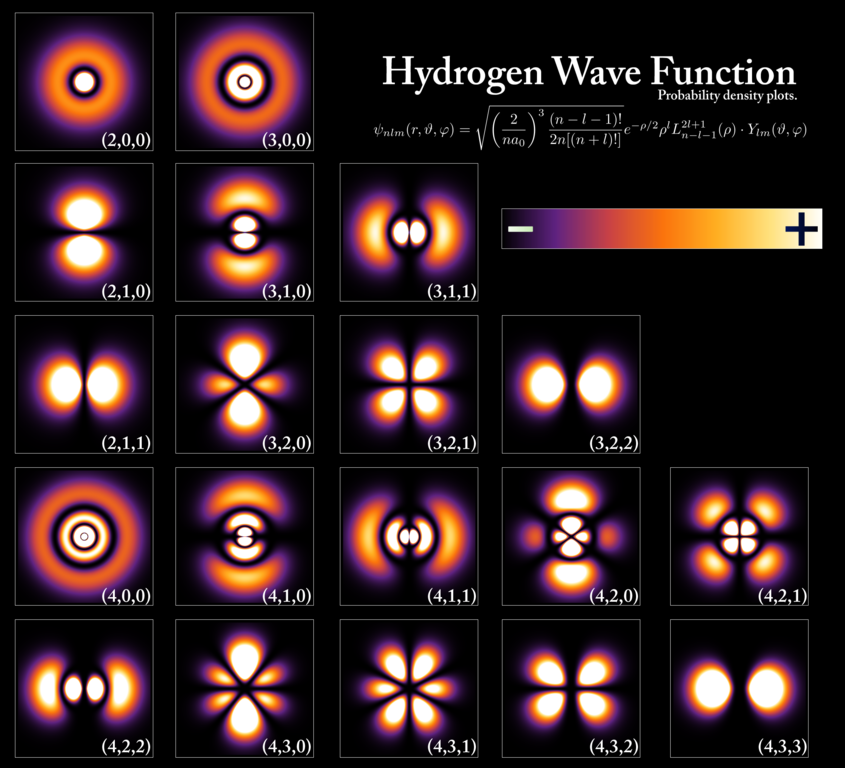 The different shapes of the electron cloud at various energy levels in a hydrogen atom. Credit: Wikimedia Commons

From the fact that the quantum numbers are necessarily integers, the possible energies the electron in a hydrogen atom can have – its spectrum – is discrete. The lone electron in the hydrogen atom can jump from one orbital to another if it emits or absorbs light that carries the same amount of energy as the difference in energy between the orbitals.

What this means for experiments is quite striking. If you shine light on a gas of hydrogen atoms, then those frequencies of light that correspond to energy differences in the hydrogen spectrum will be absorbed, and the rest will pass through, undiminished in intensity. When this intensity is plotted against frequency (or wavelength), the result is a sort of atomic Aadhaar number: you can look it up online and uniquely identify the atom it corresponds to.

An evocative example is the Sun’s optical spectrum. There are dark features in its absorption spectrum because those ‘parts’ of the light have been absorbed by elements in the star’s atmosphere. This sort of analysis is called absorption spectroscopy, and is widely used in remote sensing, astronomy and atomic and molecular physics.

Though the Sun emits light of frequencies across the visible spectrum, some segments don’t reach Earth because they’ve been absorbed by the atoms of some elements in the star’s atmosphere. These segments appear as dark lines in the spectroscope. Credit: Wikimedia Commons

A keen experimentalist, in a series of increasingly precise measurements of the hydrogen spectrum, will find that the spectral lines split. A simple analysis would suggest that the energy of an orbital depends only on its principal quantum number, n. But a more rigorous check will show that this isn’t the case. This is because an electron in an orbital can have some potential energy due to its distance from the proton – as well as some energy stored as its own angular momentum.

Now that we’re familiar with the hydrogen spectrum, let’s look at its curious twin, antihydrogen.

Efforts to describe nature at its smallest scales  gave birth to quantum mechanics. At around the same time in history (1905 onwards), another revolution had physicists coming to terms with the nature of space and time: the theory of special relativity, whose effects kick in when we move at speeds close to that of light. Efforts to make these two pictures – at the largest and smallest – mutually consistent led scientists to develop an overarching framework called quantum field theory (QFT). Among other things, QFT says that every particle is naturally paired with an antiparticle ‘partner’ – one with the same mass but opposite charge. When particle and antiparticle collide, they annihilate each other in a burst of light.

Now, we might imagine bringing a positron and an antiproton close enough to create a bound state: an atom of antihydrogen. This, our intuition tells us, is almost exactly the same as hydrogen; the only difference here is that the nucleus is negatively charged and the cloud is positively charged. 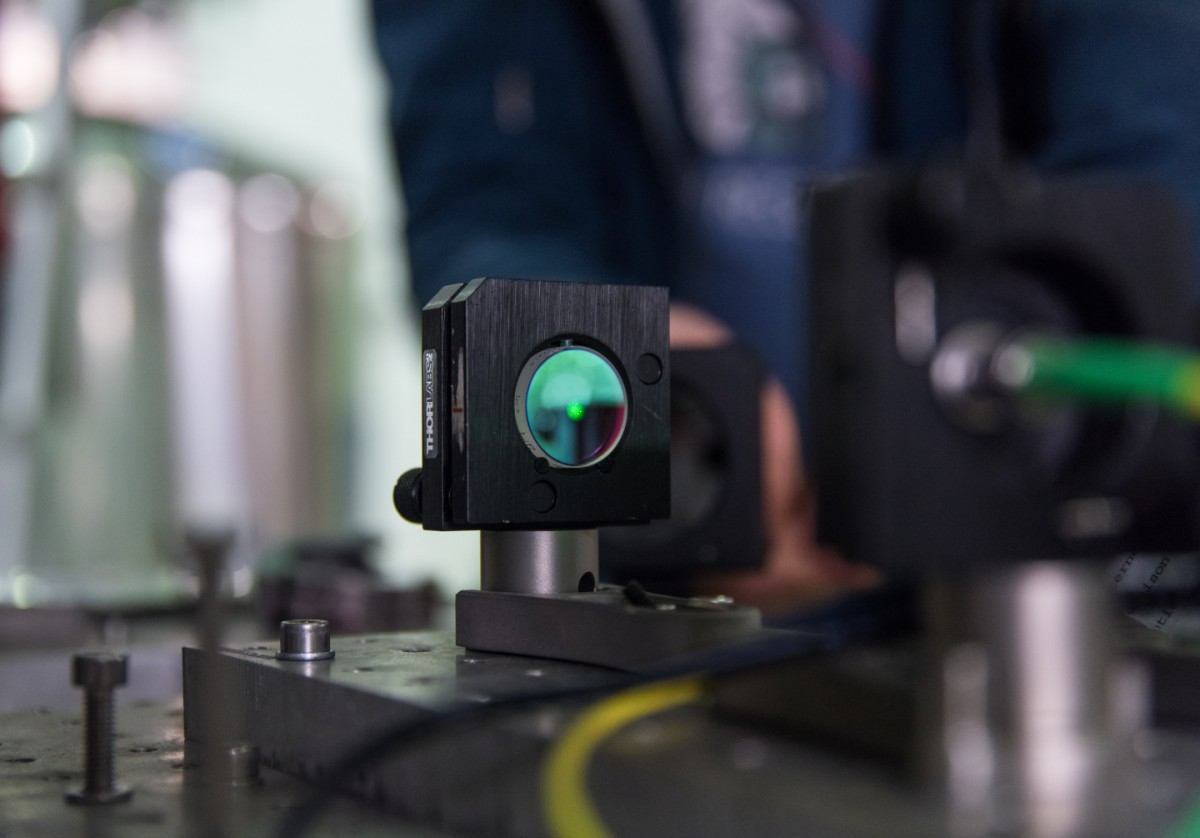 While this is easy to imagine, it is difficult to create in practice. As soon as antiparticles come in contact with their particle counterparts, they annihilate each other. To keep the antiparticles stable, we need to suspend them in a near-perfect vacuum and keep them away from the walls. The latter is possible with the judicious use of magnetic fields.

Once antiprotons and positrons are produced, isolated and stored, they may be fired at each other with the hope that two of them will come together to form an anti-atom. This is what physicists working at the ALPHA collaboration, an experiment that operates at CERN, have been trying to to do. A recent study of theirs discusses the difficulties involved. Excerpt:

A typical trapping trial in ALPHA-2 involves mixing about 90,000 antiprotons and three million positrons to produce 50,000 antihydrogen atoms. Most of the antihydrogen atoms produced are either too energetic or in the wrong quantum state to be captured; typically 10-20 anti-atoms are trapped in one four-minute-long mixing cycle.

The ALPHA collaboration recently reported that it had measured the Lyman-α (‘Lyman alpha’) transition (from the orbital n=1, l=0 to the orbital  n=2, l=1) in antihydrogen. According to the scientific paper, the results agreed handsomely with the corresponding spectral line of hydrogen.

The scientists started  with trapped antihydrogen atoms, which they illuminated using lasers to measure their spectral response. The energy difference between these orbitals corresponds to light with a frequency of 121.6 nm. Ergo, the same light when fired at trapped antihydrogen atoms would have had to excite the positrons from one orbital to the other and back to the orbital they came from.

Untrapped antihydrogen atoms annihilating on the inner surface of the ALPHA trap. These are measured by the ALPHA annihilation detector. The events are concentrated at the electrode radius of about 22.3 mm. Caption and credit: CERN/Maximilien Brice

However, spin-orbit coupling and the Zeeman effect will prevent some positrons from returning to the state they started out at, instead sending them to a state with lower energy. As a result, the atoms they belong to will fall out of the magnetic trap. By counting the number of these atoms, across a range of laser frequencies, the scientists found that the Lyman-α transition frequency in antihydrogen was the same as the transition frequency for hydrogen to within fifty parts in a billion (0.000005%).

The ALPHA collaboration’s experiment paves the way for using the Lyman-α transition in laser cooling, which is a technique to cool atoms (and anti-atoms) down to near absolute zero. At these temperatures, scientists will be able to more accurately test for differences between matter and antimatter. In turn, such studies could lead to novel tests of the laws of nature and gravitational studies of antimatter.

Until recently, Madhusudhan Raman worked as a graduate student at the Institute of Mathematical Sciences, Chennai. He recently submitted his PhD thesis and is currently waiting to defend it.