Zehra Nigah: The Melody of Consciousness

On Zehra Nigah's 83rd birthday, a tribute to her verses on love, sorrow and humanity.

Zehra Nigah, who turns 83 today, began her first volume of poetry Shaam ka Pehla Taara (The First Star of the Evening) with a couplet by Ghalib in which, a wish for the renewal of the ‘Law of Joy’ is revealed. But Zehra Nigah’s own verses are witness that here, on the margins of the law of joy, the anecdotes of the sorrow of existence are chronicled and the commentaries of the sorrow of the heart are written. If the law of joy is the desire for life, then the sorrow of reality is life itself. These very desires and realities dissolve within sensory experiences to become the art of the poet otherwise,

“Whither love and romance, whither separation and union
Still now people long for life”

The contradiction between the desires of the law of joy and the realities of life is indeed the moving force and the alluring secret of its razzle-dazzle. This continuous struggle gives Man the courage to live and shows the way to the desired destination,

“A light of hope, an eternal determination
Dancing in the darkness of life, onward to the destination”

But even today when the world is involved in a grave tussle between life and death, some writers are busy stitching their own wounds as they fail to see the relationship between the sorrow of self and the sorrow of the world, rather like a bird which knows the sky to be standing on its claws.

Also read: The India-Pakistan Masterpiece That Fell Through the Cracks

This conscious feeling of the sorrow of the world indeed is both a poet’s commodity of life and wealth of art. This sorrow is that spiritual relationship which now torments Zehra Nigah, by becoming the anguish of her native land, and then forces her to console those slain by injustice in Vietnam, Bengal, Balochistan and Iran. 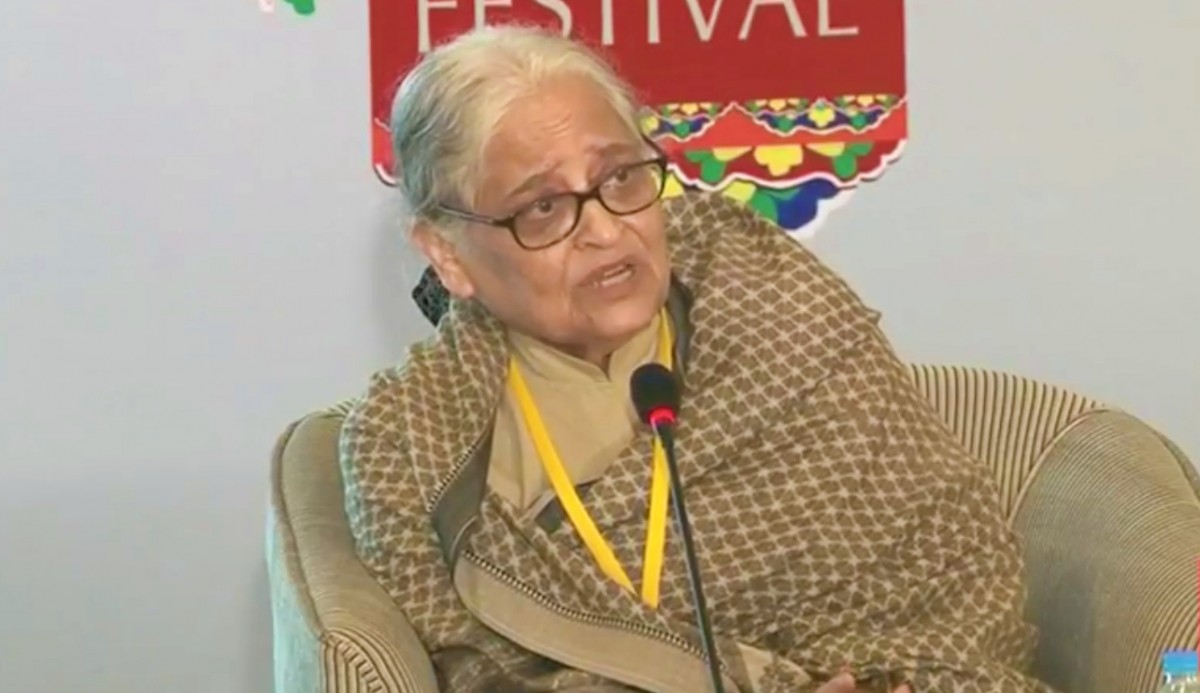 From this sorrow, a passion of love for progeny emerges. Like all mothers, Zehra Nigah too loves her children dearly and when maternal instinct becomes the very disposition of the poet, then the tone of love and fidelity in its lyricism becomes very intense. She begins to see the children of Vietnam as her own and wishes that,

If one loves one’s native country, then the feeling of deprivation is perhaps intensified because of the distance. Memories of home trouble Zehra Nigah too as she feels the tragedy of separation from her homeland with greater intensity. She says that,

“Where a seal of silence is stamped on the lips
Talk about this very company, if you can
The lamps of tears are luminous at every step
Talk about the dawn in the homeland only after you extinguish them’
How many bright-coloured dreams had Zehra Nigah seen and with how much restlessness had she waited for the dawn of freedom but,
‘Why O night of separation why this happened
We were awaiting dawn, but the night saddened”

Also read: ‘A Poet of Melody’ – How Music Conspired to Find Khayyam

Zehra Nigah is not disturbed by the gallows in that this is an ancient tradition and suits the insane,

She too is not afraid of expressing loyalty, and things have come to such a pass that now,

“Now the pleasure of seeking has stalled owing to passion
And see, the expression of loyalty loses one’s reputation”

Although she does fear lest the nation become accustomed indeed to darkness and begins to adopt death, mistaking it for life,

“Oh God this continuous call of death, this gloom
Lest it suit the hearts beset by doom”

That is why she challenges that

“O Glass-makers, do something, the house of mirrors
Hadn’t so parted from the cheek, so vexed with colours”

And when every corner of the house of mirrors witnesses in a fragmented state, what importance do the quarrels over language, the poor, nation and race hold. If we shed each other’s blood for the sake of language, Zehra says with great affection in a very gentle manner that,

Many poets of the present era have indeed adopted the custom of lamenting sorrows of the self and expressing the self.

Once upon a time, there was a great uproar about accountability in Pakistan; and it felt that the work of recording the list of deeds of people, which God had entrusted to His angels, our censors would even outdo that.

I am not a poet so it is difficult for me to say how Zehra Nigah initially selects the meter of verses for her poems. Whether her imagination, her topic of poetry and her passion shape the metres of the verse or if she chooses the metres depending on the nature of her thoughts and feelings – there is great harmony in her topics and metres.

Poets feel the tragedy that is the destruction of human personality. The older generation felt this tragedy with reference to Ethiopia and Spain. The new generation received these wounds from Vietnam, Bengal, Balochistan.

The artists of America reproached the injustice in Vietnam. Everyone praised the bravery and devotion of the hungry and unarmed Vietnamese. More meaningful than the defeat on the battlefield was the moral defeat of the Americans.

The poems of Zehra Nigah are the voice of human conscience. Whether Vietnam or Bengal, Balochistan or Iran, wherever human dignity is trampled upon, her sympathetic heart is hurt.

May she live long and prosper, and keep doing so, as is her wont.

Note: All the translations from Urdu are the writer’s own.

Raza Naeem is a Pakistani social scientist, book critic and award-winning translator. He is the president of the Progressive Writers Association in Lahore. He can be reached at razanaeem@hotmail.com.