With Urban Patronage, Khun Weavers Hope For a Better Market

Weaving cloths of increased widths that would lend khun fabric to be made into clothes other than saree blouses, khun weavers move beyond rural patronage and into fashion world. 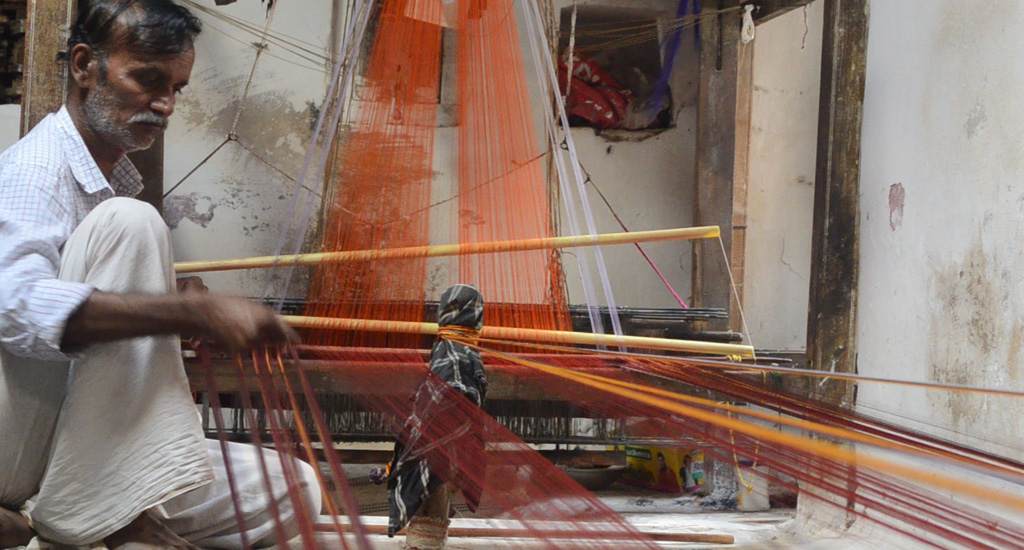 Karnataka: Guledagudda, a small town has less than 1,000 houses that are built of stone and painted white. The hot and dry town, with some dilapidated and broken wooden handlooms seen in the courtyards of a few locked houses, does not reflect the scintillating colours of the famous hand-woven khun of the region.

Known as Dharwad khun and also as khana, the fabric is woven only in pit looms in Guledagudda of Bagalkote district, in the state of Karnataka. This hand-woven fabric, used only to make saree blouses, is easily identified by the small white intricate motifs and its very unique reddish-purple border.

Till the 1990s, Guledagudda was known as one of the highest tax-paying towns, only by the sale of khun fabric. For generations, the only occupation the residents knew was weaving. With modern dressing and lifestyle changes, khun fabric lost its market and Guledagudda its source of revenue.

By weaving khun fabric of increased widths so that clothes other than saree blouses can be made, and with the patronage of designers who showcased the fabric in fashion shows, the weavers hope to regain their place in the handloom world.

None of the weavers knows when khun style of weaving came to Guledagudda and its neighbouring Illkal town where well-known Illkal saree is also woven. According to a research paper Khana: The blouse material of north Karnataka, published in 2017, the style is believed to have come into being around 8th century A.D.

From then to about two decades ago, it was only hand-woven as a saree blouse material. Rural women and farm hands in northern Karnataka, southern Maharashtra and some parts of Madhya Pradesh used the fabric to stitch blouses. Till today it is the only fabric offered to Devi Yellamma temple in Saundatti located in Belgaum district.

Just as the other hand-woven fabric in the country lost markets, khun also faced challenges of escalating production cost and a shortfall in demand. Many set up power looms to increase production and cut cost by using less labor and turning to cheaper yarns like viscose and polyester.

Guledagudda has 200 power looms at present, and only about 50 pit looms or hand looms. With the use of cheaper raw materials and the ability to weave faster, power looms present a stiff competition to the pit loom weavers.

While many fashion designers worked with handloom fabrics such as Chanderi, Jamdhani, Ikat, Benarasi and Kanjeevaram, khun did not find any patrons in the fashion world. The reason could be the width of the fabric being only 32”, meant as it was, for making saree blouses.

These blouse pieces, displayed in a unique folding style, were so much in demand that there were more than 50,000 pit looms till the end of the last century. But then the khun started losing its sheen and today there are only around 100 handlooms.

“Majority of us are educated at least till class X, but we never thought of training for any other profession, as weaving was a family business and since childhood, we used to sit in the pit looms and weave,” said Rajshekhar Kollude, a fourth generation weaver in Guledagudda. 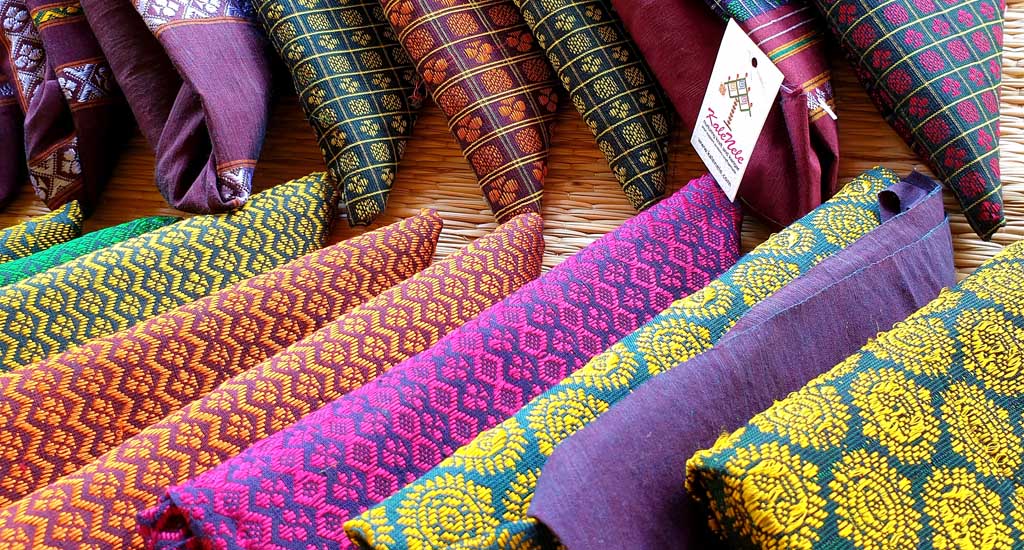 Khun fabric have traditionally been woven in jewel colors and of a specific width. Photo: KaleNele

“Earlier my family had 20 looms. But now I can hardly manage three looms, as most of my helpers and other family members have migrated in search of other livelihoods,’’ Kollude told VillageSquare.in.

Small unskilled jobs like a helper in a hotel and sales person in malls or textile shops, which assured them of a definite income in big cities such as Bengaluru, Hubli, Pune, Mumbai, etc. lured the weavers away from the uncertainty of an income from weaving the khun fabric.

The gorgeousness of the khun is the contrast of the border with the main fabric of brilliant jewel colours like electric blue, emerald green, ruby red, golden yellow, etc. with its own unique small motifs. The small irregularities, little unevenness of the handloom weave using only pure silk and cotton yarn make khun one of its kind.

“It was the sight of the sheer rustic beauty with such brilliant colours and the contrasting border of the blouse worn by a vegetable vendor on the streets of Mumbai that made me hunt for the origin of the almost forgotten fabric,’’ Shadangule told VillageSquare.in. 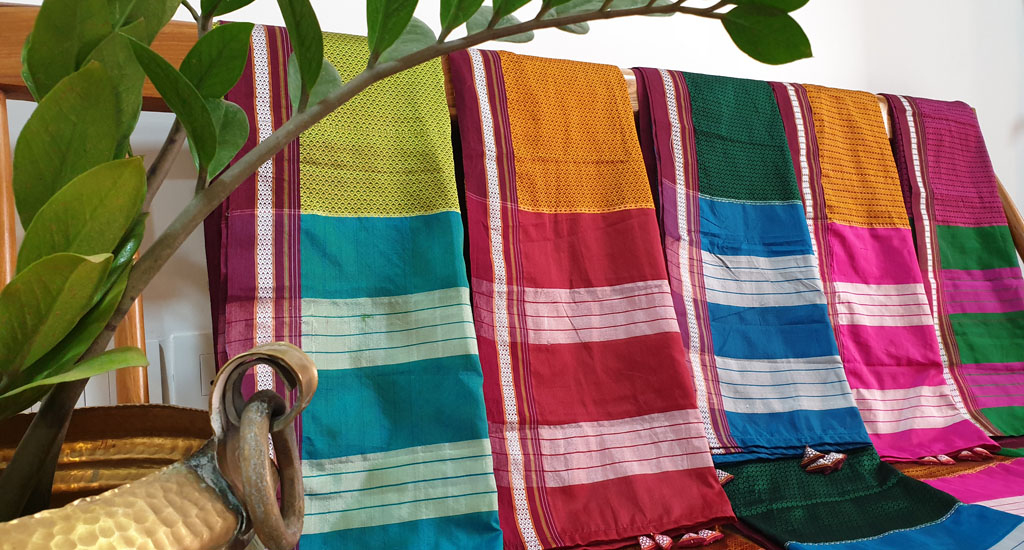 Weaving pieces of increased width has allowed khun fabric to be made into duppatahs and other clothes. Photo: KaleNele

Shadangule’s quest led her to Guledagudda. She started working with a few weavers, urging them to change loom size and introduce new colours. Last year she took an entire collection comprising only of the khun, to the ramps of New York Fashion Week and got a good response. She showed the collection later at India Fashion Week, Delhi.

“I invited the Maharashtra INTACH to take part in our annual crafts bazaar at Dilli Haat in early January this year where they exhibited khun and got a very good response,” said Jaya Jaitly, who has been working for nearly four decades for the upliftment of grassroots workers of traditional arts and crafts of India and handloom sectors. “I think the time for the revival of khun has certainly started,” she said.

“The exhibition at the Dilli Haat helped us spread awareness of the beauty of hand-woven khun. Now more people understand the detailing that goes into this weaving, plus the comfort of wearing this slightly thick and coarse fabric made with only natural fiber. That is the first step,’’ Tawade told VillageSquare.in.

“I learnt that khun was on the verge of extinction. So much was the neglect that people whom I approached for sponsorship to revive the fabric, refused to do so but assured me of all help if I wanted to begin some other business!” Kulkarni told VillageSquare.in.

Shadangule and Kulkarni have adopted some weavers and helped them change the loom size. Weavers have increased the loom size to weave 36” and 45” width fabric needed to make salwar kameez, dupattas, a dress or a saree.

As installation of new looms costs between Rs 70,000 and Rs 80,000, the weavers decided to change the dimensions of the loom. Redesigning costs them only Rs 6,000 per loom, they said. The weavers have changed two looms each.

In power looms, it is easy to switch between different widths. But in pit looms, the weavers will need to spend money again, if they wished to return to the original size. The weavers learnt that a saree woven in a pit loom was sold for Rs 6,000 to Rs 12,000 in cities like Bengaluru and Pune.

Given such demand for fabric of 32” to 36” width for duppata and 45” for saree, most of the weavers wanted to remodel their looms. Their plan to change more looms this year got stalled as their business has been hit by the coronavirus pandemic.

Though there were efforts and consultations with NGOs and designers earlier, the attempts to give a boost to khun weaving started in 2018. “If these changes and awareness had started a decade ago, we wouldn’t have lost our artisans to cities,’’ Siddaramappa Maligi, a fourth generation weaver of Guledagudda, told VillageSquare.in. “To revive khun we need more customers.”

The designers’ support has started the trend of experimenting with dyeing the yarn with new colors and using only natural silk and cotton yarns. The weavers continue to sell in their regular markets in Pune, Sholapur, Mumbai, Kolhapur, Bengaluru, Dharwad and Hubbali also.

The slow transformation of khun as the mainstream fabric was manifested when Maharani Radhikaraje Gaekwad of Vadodara sported a khun saree. So the humble khun used by farmhands has reached the royals. But more planning is needed, to keep the hand-woven khun alive.

“The urban elite are always on the lookout for something new from traditional sources and khun will be the latest to join other handloom fabrics that have caught the attention of those working in the sector either in promotion, design or marketing,’’ Jaitly told VillageSquare.in.

This article was published in VillageSquare.in. Read the original here.